With the power off, the flaps of a parked P-51 assume their characteristic drooped position as hydraulic pressure bleeds away, and very lovely and ‘Mustangish’ they look. I was sorely tempted, but decided against, because I could foresee all manner of problems with angles and tapers; and if I got the flap leading edge geometry ever so slightly wrong relative to the wing the error would show up like a sore thumb!

Yet by retracting the flaps to dodge one potential pitfall, another looms large: Any slight flaw where the wing flows smoothly into the big shiny, slightly concave raised flap just as assuredly spells damnation – hence the importance of building the flaps, ailerons and main plane as a single integral structure and separating them afterwards.

The first stage is to transfer the plan view of the entire wing, including control surfaces and all other relevant data, from the drawing to a sheet of marine grade 3/16-in. (or thereabouts) ply. Once cut out with a hand held jigsaw (an awkward job with a piece so big), the ply blank is screwed to a sturdy baseboard to ensure that it is perfectly flat and true, and the three-dimensional shape built up progressively from ply half-sections glued at their respective stations, first on one side and then on the other side of the basal sheet.

I say ‘half-sections’, but in reality these are cut to allow for the thickness of the sheet on which they sit. So if the basal sheet is 3/16-in., each half-section is cut 3/32-in. either side of a line from the apex of the leading edge to the trailing edge, and for an aerofoil section the top half of necessity differs in shape from the bottom half.

In theory, once the structure has been derived in this way, in-filled with balsa wood and carved and sanded back precisely to the ply formers, its shape has to be right! This is the fundamental principle that underlies the entire model.

However, now comes a complication: Were the same 3/16-in. ply as specified for the wing (or tail plane) be used for the control surfaces, it would be difficult, if not impossible, to achieve an accurate, knife-like trailing edge. So here a thinner ply sheet of 1/6-in. or less must be substituted at the outset. And this, of course, necessitates a packing layer between the thin ply and building board to allow for the thickness differential. It also requires that a step be included when cutting the half sections.

I have described this process before in my pages, but it bears repeating because it is fundamental to he methodology and the structural integrity of the model. It also embodies the key message, which is that the flaps and ailerons should be built up together, and their shape refined, first on one side and then the other, before they are separated from the main plane, as shown in the photographs.

There is little more to say about the flaps, since – apart from the litho plate skinning process – there is little visible detail to worry about. I used .006-in. thick litho-plate to cover the trailing edge, for the reasons explained in my description of the elevators. The rest is straightforward.

One subtle feature of the detailing process does warrant mention. Study of photographs of Mustangs, or better still, the real thing, will show that compared to the characteristically flat, smooth surfaces of the wing, the flaps, and to a lesser extent, the ailerons, have a distinct quilted appearance imparted by the riveting. This is accentuated on a polished surface and is very obvious in the Hendon machine.

So on completion of the cladding, and when the time came for rivet detail, I had this firmly in mind. Before drilling each rivet hole, I use a sharp pointed tool to mark its position. Where I require a flat surface (such as the wing) the mark is just deep enough to locate the drill bit, but over the flaps I pressed a little harder to created a definite dimple. The result, after the rivets had been emplaced and the surface polished, can be seen in the photographs. 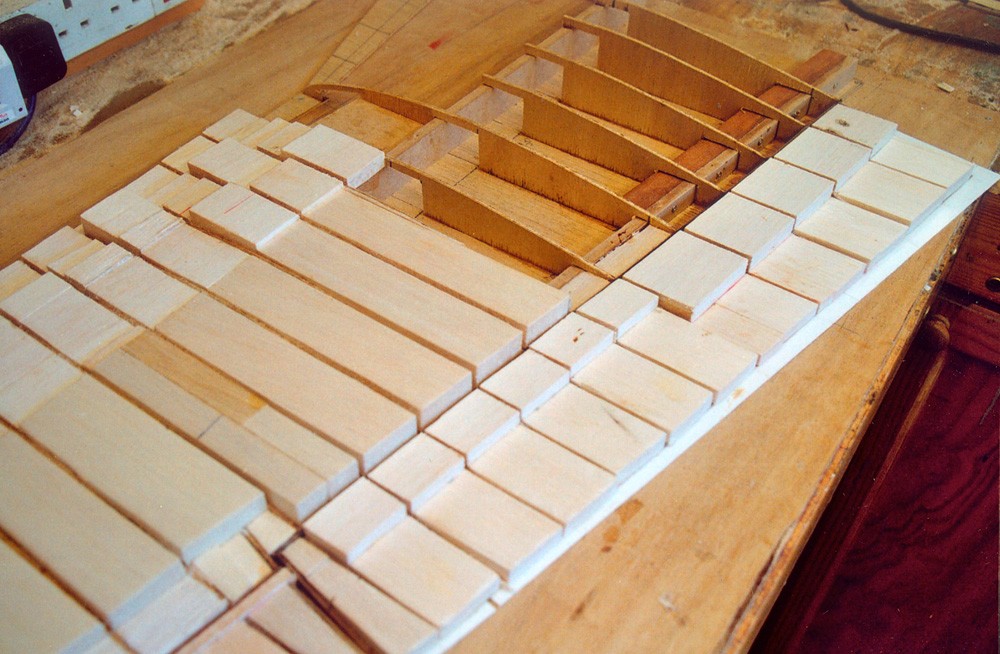 The top half of the port wing and its flap under construction on the building board. Once the soft balsa has been carved and sanded to the shape defined by the plywood half sections the piece can be removed and the process repeated on the reverse side. The flaps are attached to the wing by a set of embedded brass tubes with telescoping brass rods. Note the sheets of white plastic packing are just visible under the flap (see text).

Late stage in the construction of the wing. Note the crisp, sharp trailing edge and smooth flow of the aerofoil shape across the hinge lines. 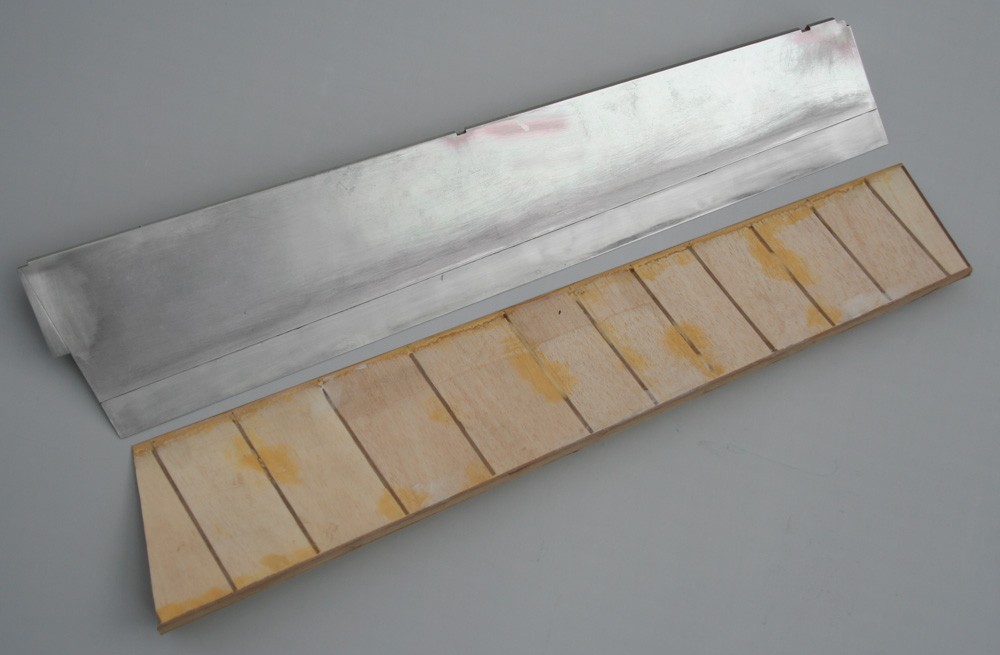 The metal skinning process is straightforward, especially since by installing the flaps in the raised position I sidestepped the need to model the tapering semi-circular contours of the leading edge. 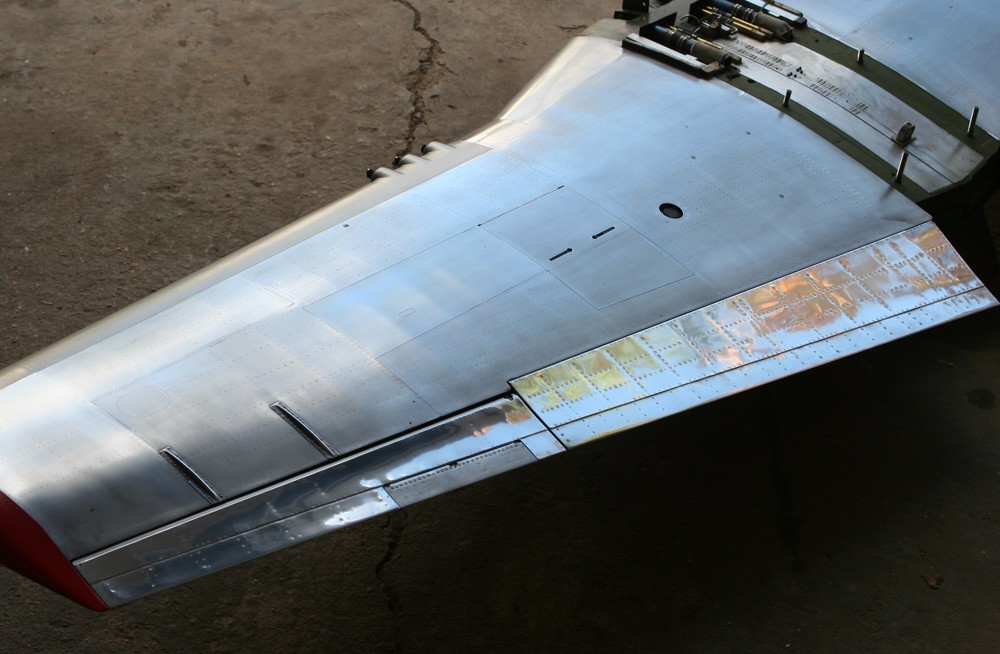 The contrast in 'texture' between the smooth surfaces of the main plane and the 'quilted' appearance of the flap shows nicely in this late evening picture of the nearly completed wing.