Spitfire Mk I  »  A home at Hendon

A home at Hendon 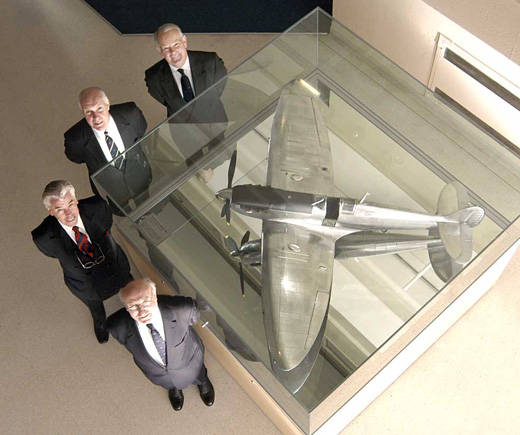 The model’s debut at the RAF Museum. Clockwise: John Freeborn, Secretary of the Friends of the RAF Museum; David Glen; Dr Michael Fopp, the Museum’s Director and Terry Holloway, Group Support Executive of The Marshall Group at Cambridge.

For me at least, the model Spitfire’s story ended on Thursday 25th January 2005.

At the invitation of the Royal Air Force Museum, Eva and I drove down to Hendon for a small, informal gathering to mark the official handover. We arrived a little early and I took the opportunity to give Eva a lightening tour of the main hall, with the result that she arrived for the photos bravely trying to conceal a painful stitch.

We were met by Dr Michael Fopp, the museum’s Director General, Richard Simpson, Curator of Aircraft and John Freeborn, who is Secretary of the Friends of the RAF Museum, the group who so generously funded the magnificent custom built showcase. It was a huge pleasure to meet John at last, for without the Friends it may well have been some time before the model saw light of day. I hadn’t been told that Terry Holloway, Group Support Executive at Marshall Aerospace in Cambridge would be present too, but I should have guessed, for without him things would not have been complete, because it was Terry who introduced me to Michael Fopp well before the model was complete.

The museum’s photographer took the pictures and we all repaired for lunch in the board room, pausing on the way to admire a cased collection of memorabilia only recently donated by one of Britain’s greatest aviators, Alex Henshaw. As chief test pilot, Alex probably knew and loved the Spitfire better than anyone. Sadly, within weeks I was reading his obituaries in the national press.

A striking photograph of the model at Hendon taken by a visiting journalist.

The juxtaposition was not lost on me. My model by amazing good fortune had found a home side by side with some of the most poignant reminders of the genesis and history of a remarkable little fighter aircraft, which in helping to change the course of history itself became the stuff of history. I could not have wanted for a better reward for my efforts or a better home for my model. 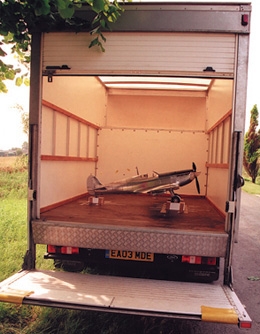 A hot August morning in 2004 and the little Spitfire, securely taped to the bed of a rented truck, is ready to make its 40-mile journey down the A1 to Hendon in North London. 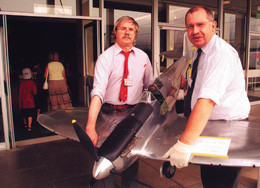 Gloved up and waiting to take the model in are Richard Simpson (right), Curator of Aircraft, and Andrew Simpson (no relation). 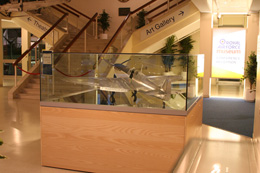 Two years later in November 2006 and after a period in storage at the Museum the model goes on display in its custom-built display case immediately outside the Museum shop in the public entranceway to the Conference Centre. 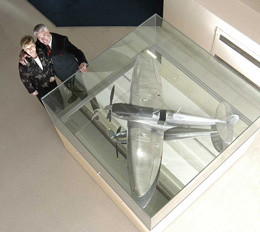