With the radiator fairings and their flaps almost ready to install, one final hurdle remained: the matrices for the radiator and oil cooler blocks. I described in detail in my book Spitfire in my Workshop, how I contrived a convincing ‘mesh’ facade for the radiator block of my Mk I Spitfire. The Mk IX differs in that the oil cooler and radiator cores are integral within the starboard side fairing. The technique, however, remains the same: heavily scored black styrene sheet mimics the horizontal foliations of the radiator, and a domestic fly curtain makes a plausible ‘honeycomb’ for the oil cooler.

I’ll not elaborate on the technique here, because it is available elsewhere on this website; however, I do want to highlight a variation on the theme that I employed in this instance: The radiator matrix is characterised by closely spaced horizontal foliations; but there are also serried vertical divisions. In my Mk I, I effectively represented these latter with black styrene micro-strip cemented into scored groves and highlighted by ‘dry-brushed’ aluminium buffing powder. My reference photographs for the Mk IX clearly indicate these vertical features, yet they appear finer and more subtle than their Mk I equivalents. I began with every intention of using micro strip, until – in a bolt from the blue – I hatched the notion of substituting smooth silver-grey sewing thread. Wound continuously around the ply-reinforced panel, this embeds itself into the scored slots in a singularly realistic way. I’ll let my photos speak for themselves.

I deliberately set the single radiator flap of my Mk I wide open to reveal as much internal detail as possible. Given the twin fairings in the Mk IX (and my rapidly advancing years!), I decided to close the flaps and thereby save myself work. Thus the internal actuating mechanism is simplified and restricted to what can be seen, and the same applies to more minor internal detail such as the riveting and the ‘nuts and bolts’ in the flanged aluminium frame used to secure the cores in situ.  Moreover, since the full depth of the radiator assembly within the confines of the wing is only partially represented, my cores are significantly truncated in depth. I make no apology for the short cuts on the grounds that what can’t be seen won’t be missed.

With the ‘mesh’ facades glued once and for all into the assembly and the L-section aluminium framework added, I could finally apply myself to fitting the completed fairings.  Given the subtleties of the gull wing shape in the vicinity of the radiators, I admit to huge relief that the fit is as good as it is; not perfect, but good!  Thus the first task was to mark out and cut the aluminium strips that reinforce the gently curving periphery of the bell shaped flanges. With these glued in position I drilled pilot holes for the fasteners, nine on one side and ten on the other.  As my photograph shows, these fixings are supplemented internally just aft of the radiator blocks, where I riveted a pair of L-section brackets drilled for 12 BA cheesehead screws. This meant that each fairing is secured by a total of twenty six screws, most of which serendipitously self-tap into hardwood elements within the wing structure. It took most of an afternoon to mark drill, countersink, insert and tighten these fasteners, and, counter to my worst fears, they served to pull both fairings tight the underwing. Whatever might fall off my model over the years to come, it will not be the radiator fairings!

To hold the flaps in place I machined two 1/2-in long brass pivots, one per side. These engage  via holes hole in the fairing walls into a brass tube embedded within the leading edge of each flap. The pivots are ornamented on their outside ends with ‘big’ 9 BA brass nuts, emulating the original. I’m tempted to fit the doors permanently, but experience suggests ‘dry fitting’ them, at least until it’s time to set the model upright on its undercarriage. And it is the main landing wheels that are next in line for attention! 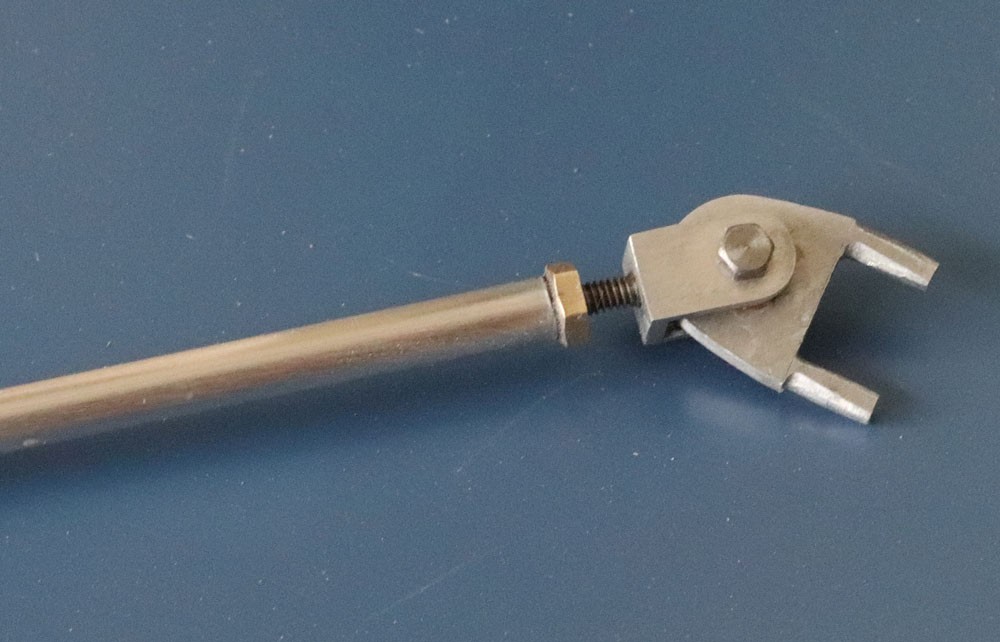 I settled for a somewhat simplified lower section of the radiator flap actuating arm, since the remainder of the mechanism is totally hidden from view in the completed model. 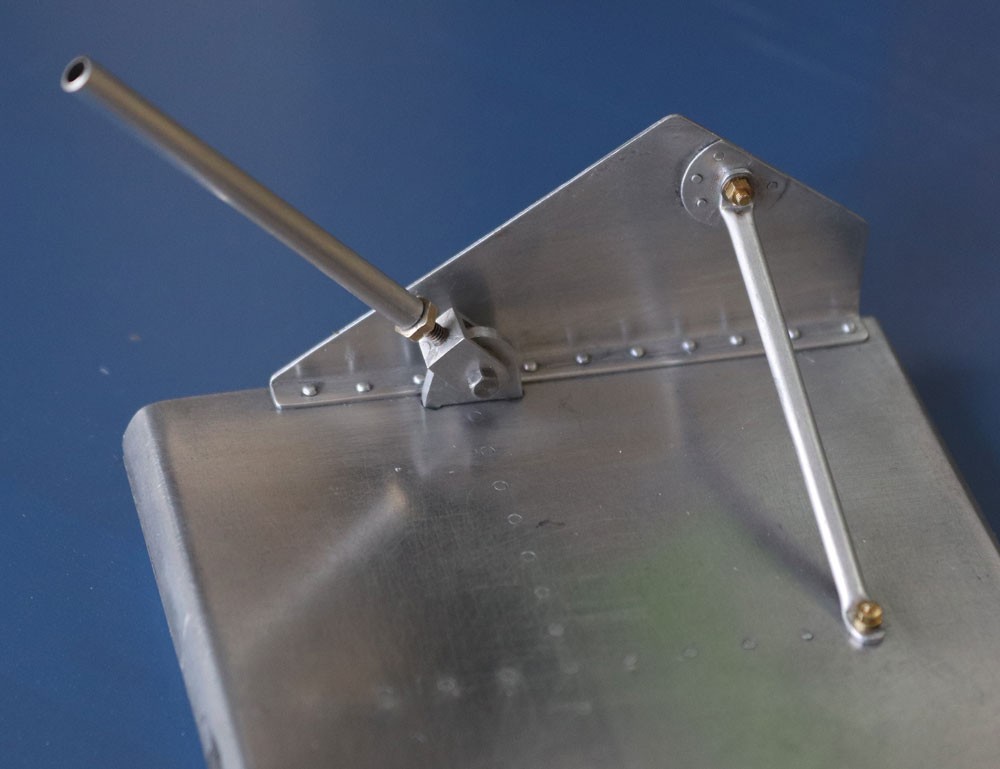 The flap completed and ready to fit. 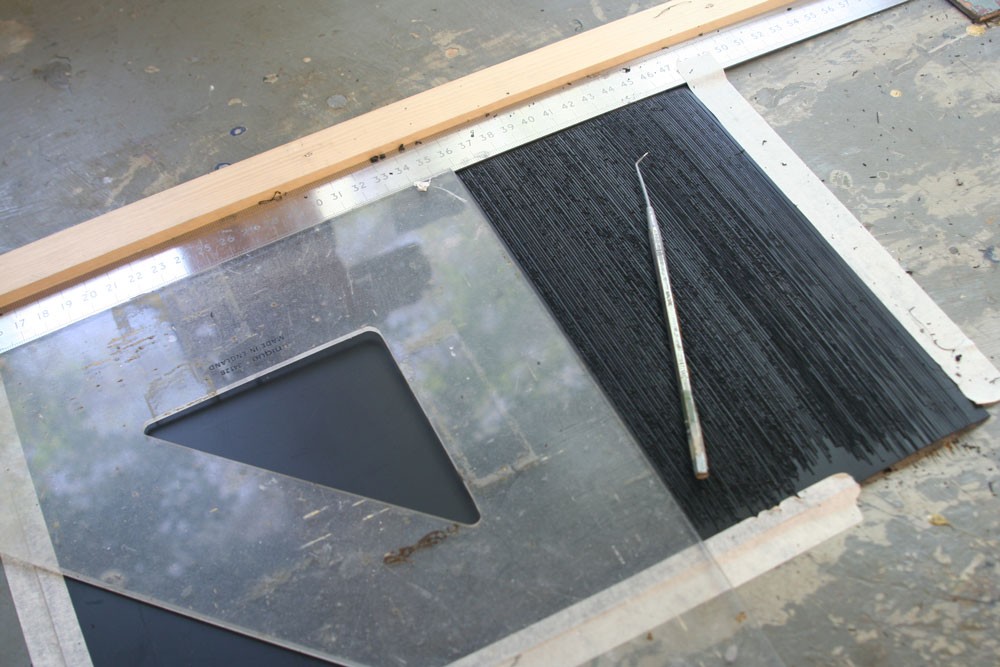 Once set up, the process of deep scoring of the radiator matrix takes no more than 20 minutes or so. I use a right angled dental probe with the point slightly burred to give a ragged feathered cut. The fine tool is quite springy and this assists in achieving the effect. 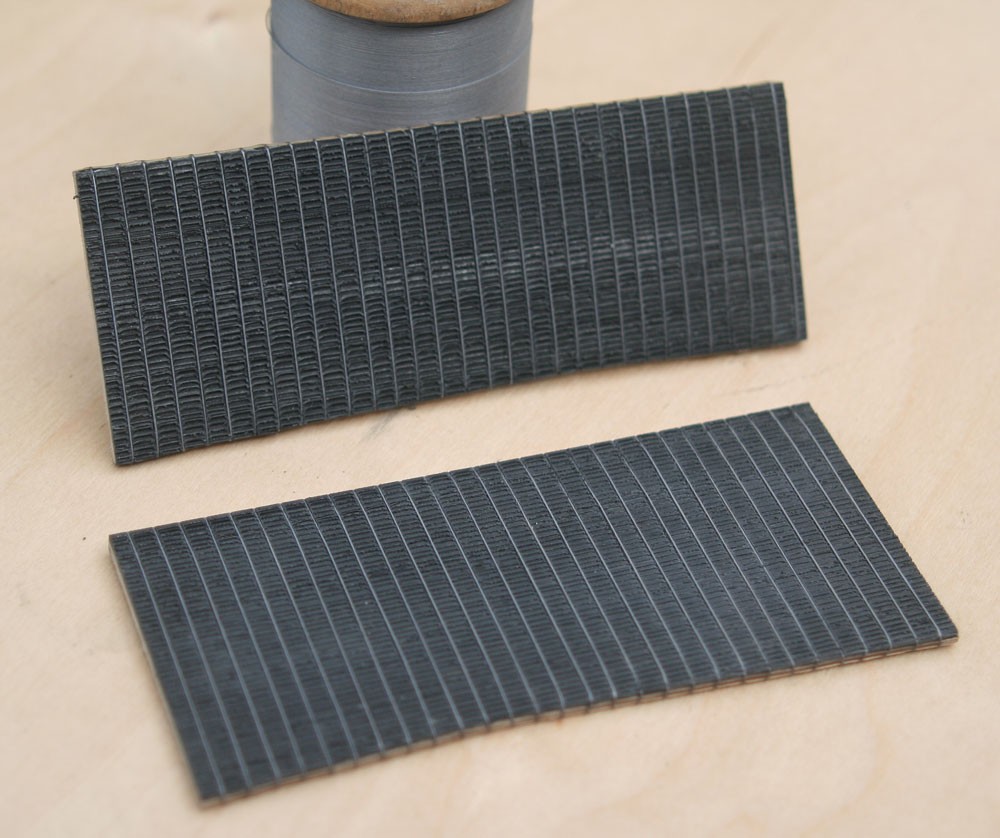 Two completed 'mesh' facades. The panels are glued onto a three ply base to make them rigid. Note the silver grey cotton used to good effect to delineate the vertical sections. 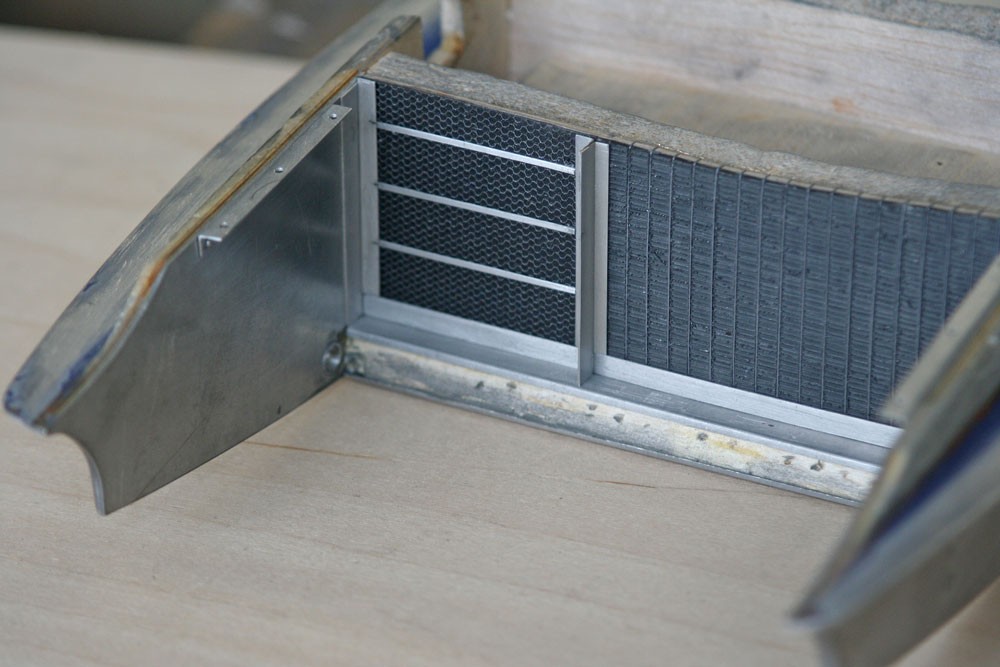 The metalwork around the outside of the panel has been installed, and the distinctive 'honeycomb' of the oil cooler can be seen clearly. The mesh surface detail is enhanced by subtle dry-brushing with paint, aluminium powder and grey pastels, but it's best not to overdo it! 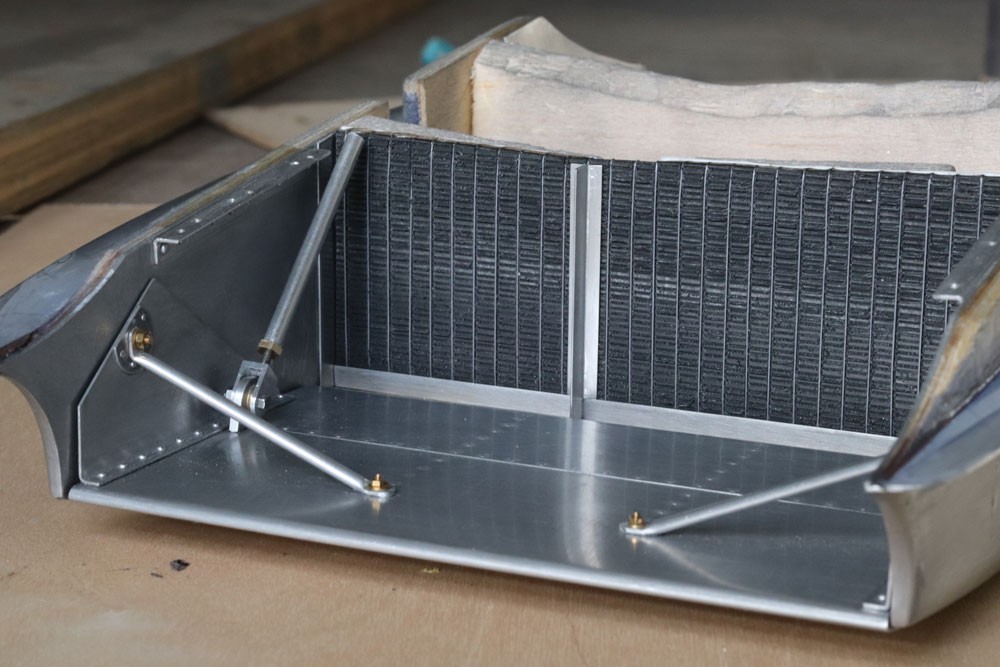 The starboard side for comparison. The simplified push rod engauges into a small hole in the underwing ramp. In reality there should be a crank and a second coupling, but there is insufficient room given the radiator cores should extend an inch or so further into the wing that they do. 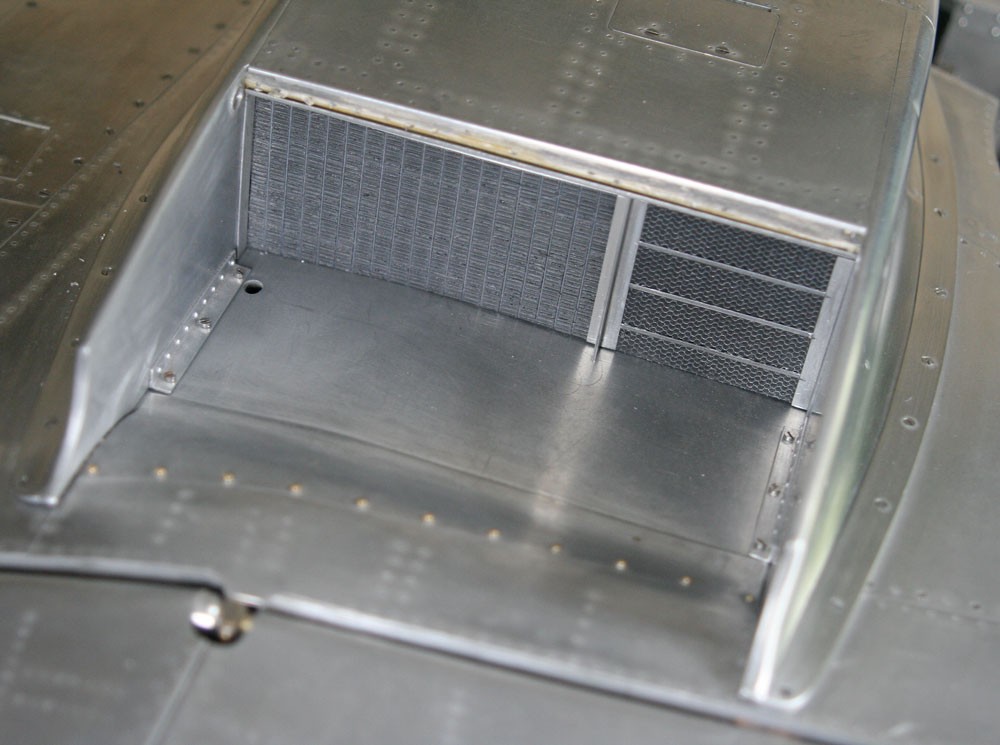 The installed sub assembly showing the use of screw fixings both inside the fairing and along the outer flanges where carefully countersunk holes are required. Fortunately, the thickening effect of triple layers of aluminiun plate allows for this. 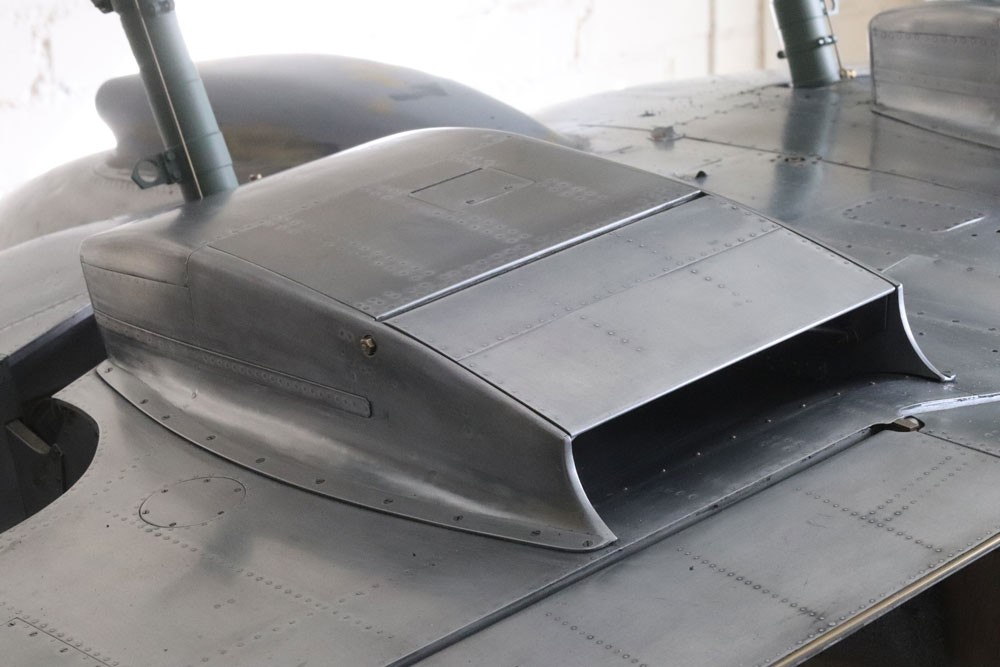 A neat job, and a challenge that I am relieved to have put behind me.