It is more than a year since I commissioned woodworker and vintage aircraft restorer Colin Essex to make the beautiful walnut pattern for my Spitfire’s Rotol airscrew blades (see diary entry for 20th July, 2017).  During the month of June just gone I finally got around to producing the castings.

Readers who have perused my P-51D Mustang diary may be familiar with the technique, which relies on a two-part vertical silicone rubber mould.  I used Sylmasta slow-cure casting resin, leaving each pour in the mould for at least 24 hours to ensure maximum rigidity for the castings prior to extraction.  I made five blades in all, and only one showed a minor degree  of distortion, and that simply because I had removed it prematurely. The seam lines located about a third of the way up each blade were also remarkably good requiring only a very minimum of filler during the cleaning up process.

The next job was to chuck each blade in my lathe with view to turning then parting off its root section as an accurate push fit into the inch-deep holes bored almost three years previously into the propeller boss (see diary entry for 28th April, 2015).

A last-minute hitch occurred when I realised that I had no reliable data on the at-rest pitch angle of the Rotol aircrew of a Spitfire Mk IX.  Perusal of scores of photographs proved inconclusive; however, an email to Historic Flying at Duxford conjured up an almost immediate answer:  12 degrees at the tip relative to the plane of rotation. My sincere thanks to Martin Overall for the info.

Finally, with the blades located in their sturdy boss, checked for true and the pitch angle set using a simple card template, I was able to drill four vertical holes for a set of hefty self-tapping ‘grub screws’ to retain each of the blades securely and accurately.

Ultimately, the entire assembly will held in place on the prop shaft by a large nut and friction washer, followed by the spinner which is secured to its backplate by a set of eight screws, as in the full size version. 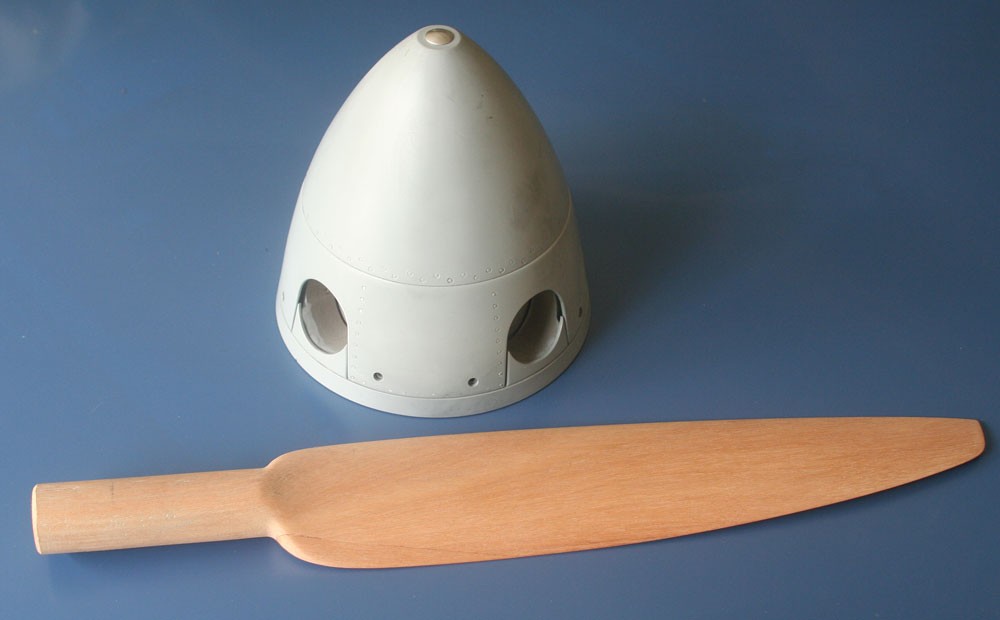 The Spitfire's completed spinner and the original wallnut pattern from which the prop blades will be cast. 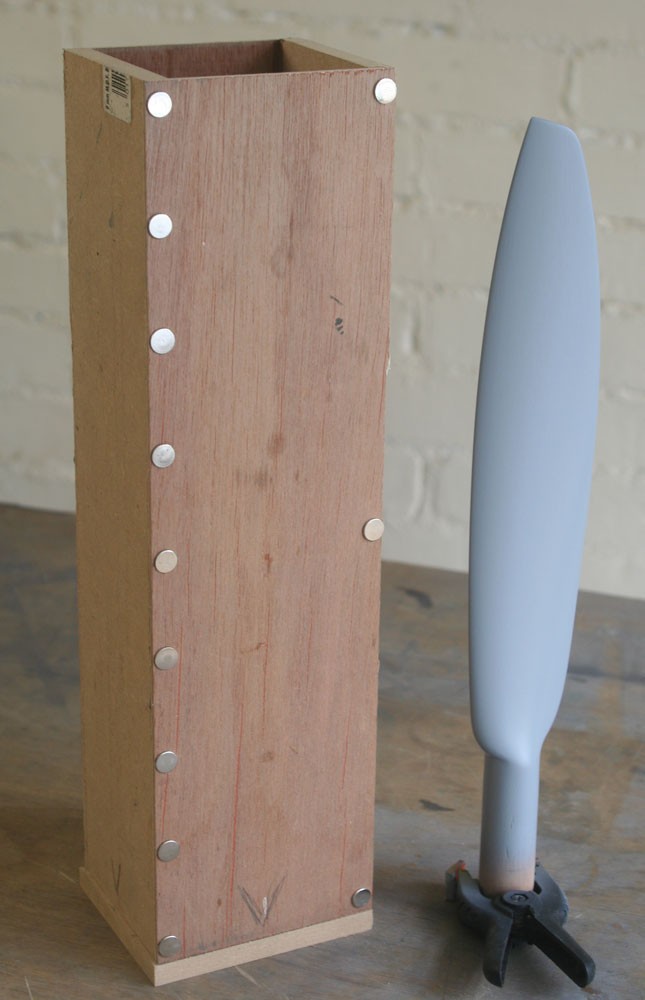 A simple purpose built plywood container into which the silicone rubber mould will be poured. 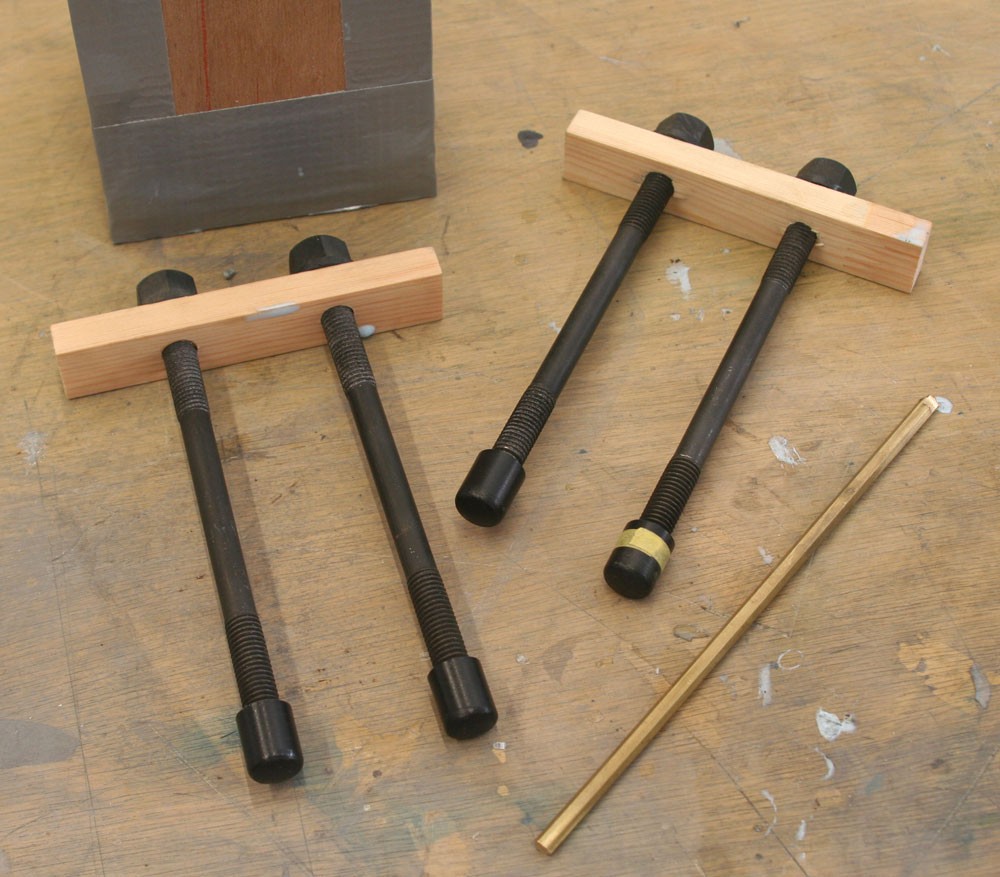 An ad hoc contrivance to form the vital locator pins that will be used to re-position the two halves of the rubber mould accurately together for each resin pouring. 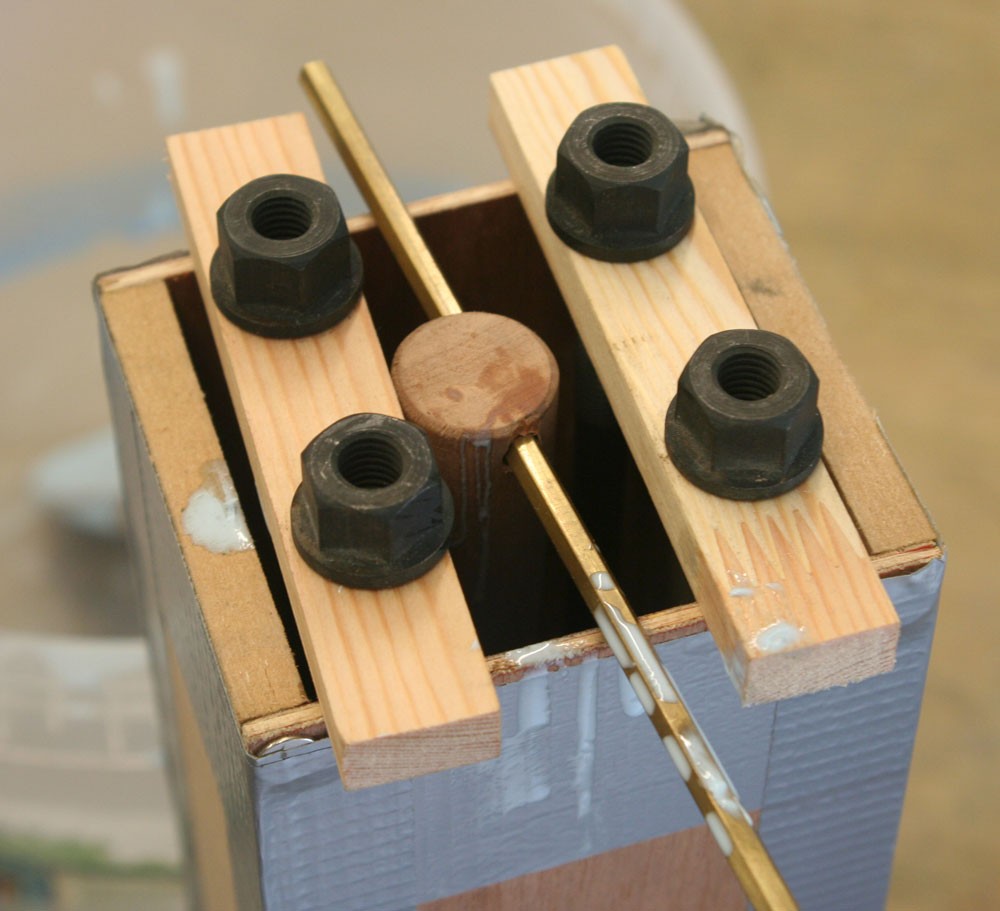 The wallnut pattern and the locator pin assembly in position ready for the first silicone rubber. There is just enough space gauge the depth and the rubber is poured to a level of about a quarter of an inch up from the bottom of the locator pins. Once set, the pins are removed and the mating surface treated with a release agent before the mould is topped up with a second pouring of silicone rubber. 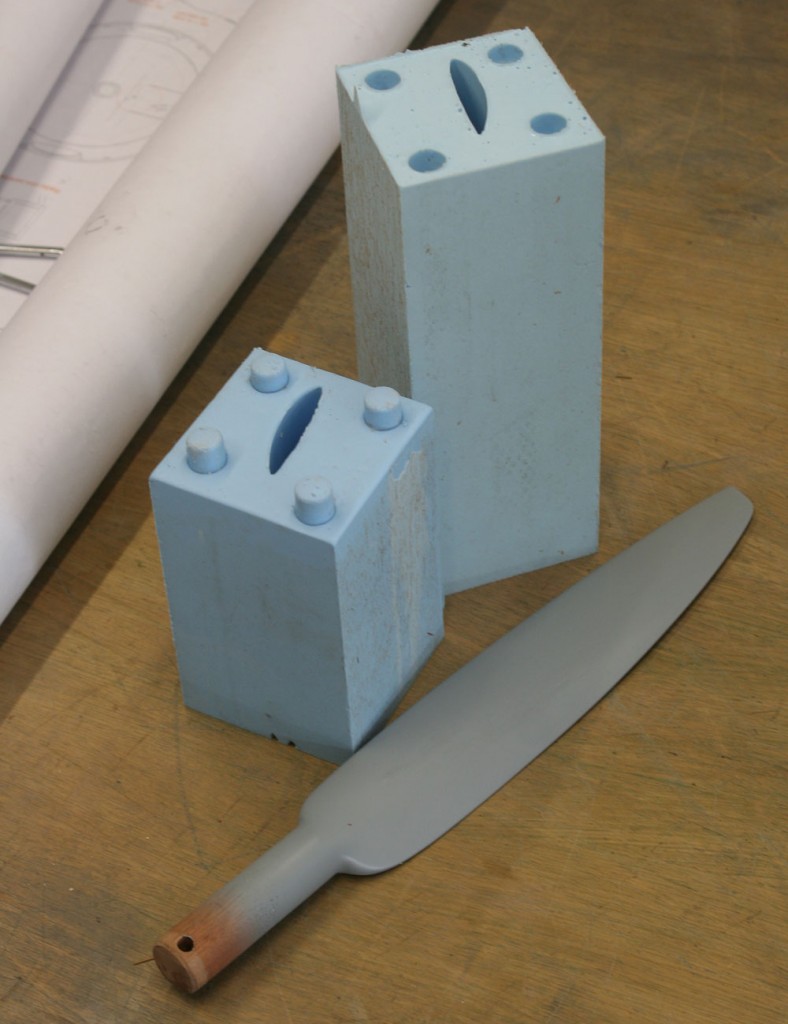 The finished two-part rubber mould. The four dome-shaped pins with their matching cavities ensure that the two halves assemble together acurately each time the mould is used. 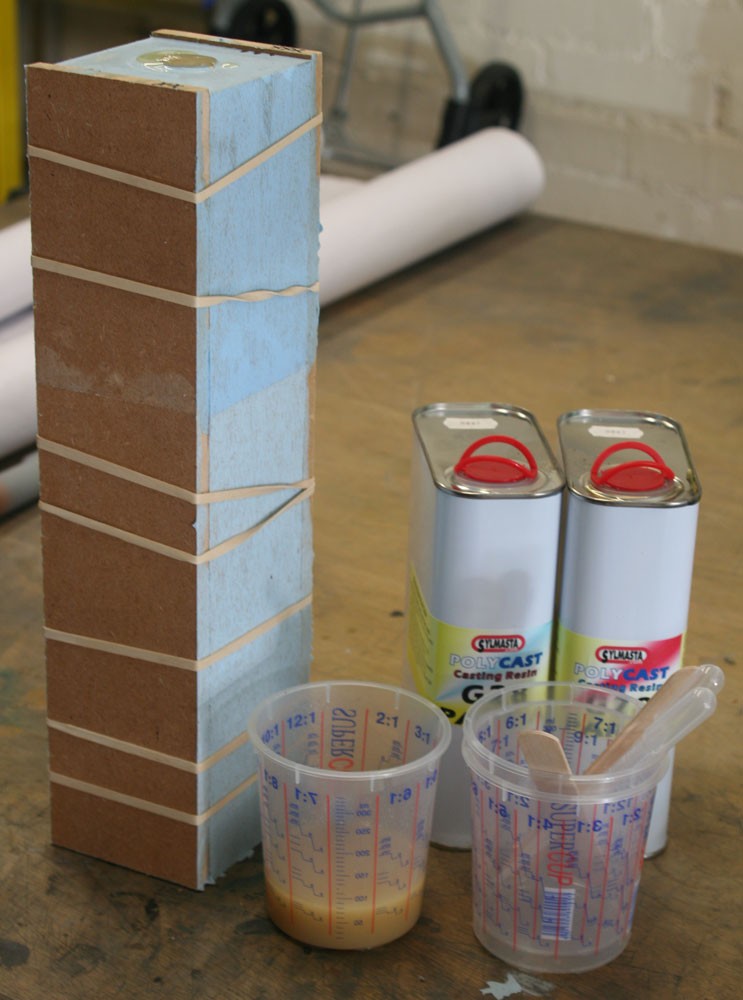 The two-part mould reassembled during the casting of a blade. The relict sides of the original plywood container serve to stiffen the mould and keep it from bowing. 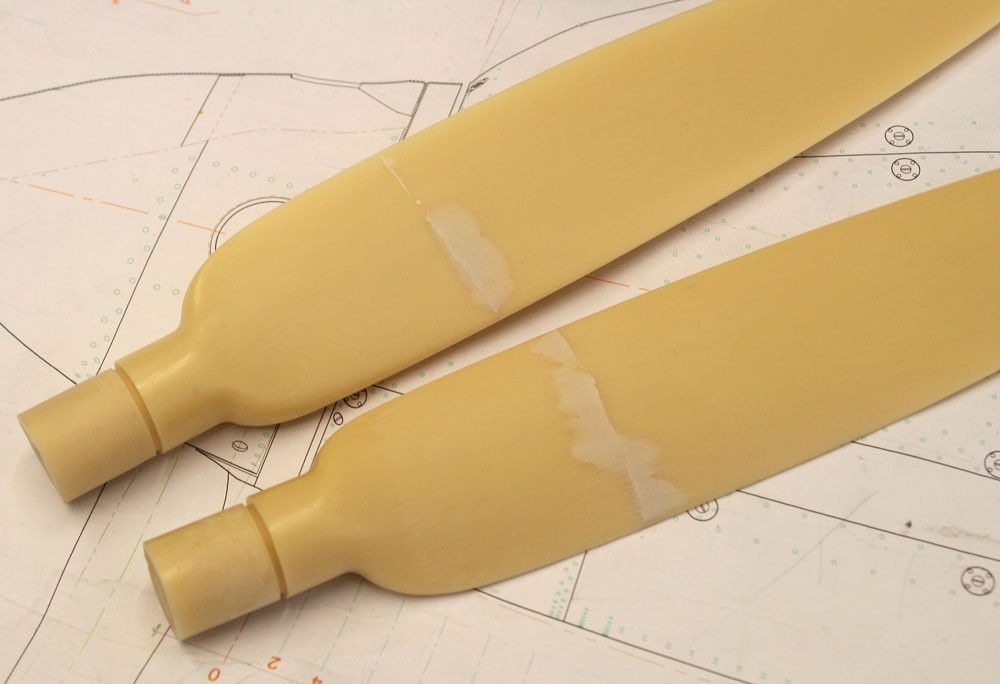 Minimal work is needed on the seam lines. 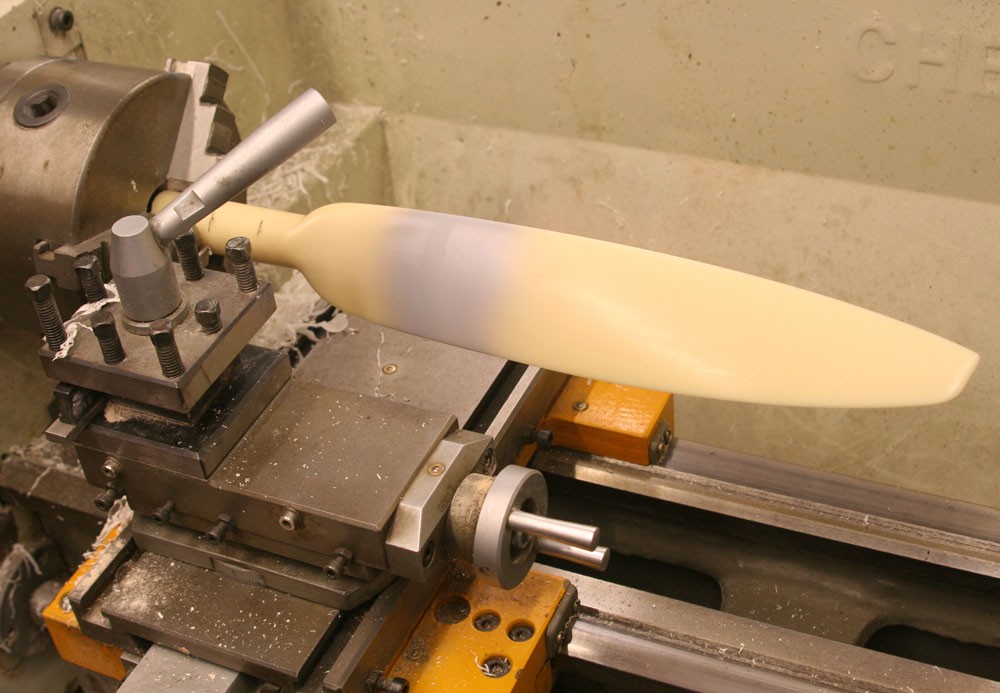 A completed blade chucked prior to turning the root to the correct diameter as a push fit into the airscrew boss. 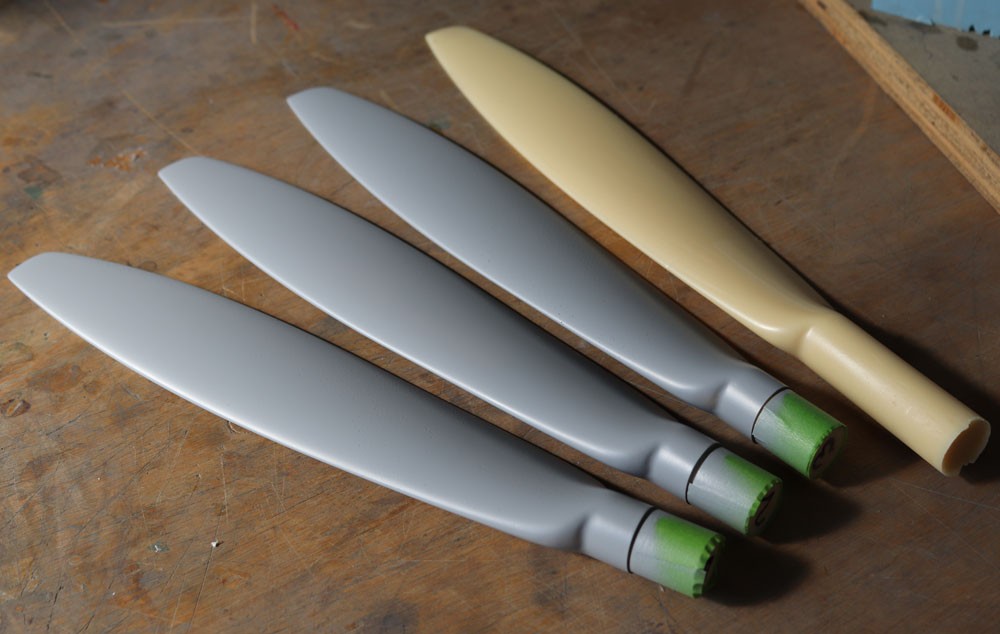 Three blades primed and ready for spray painting; one to go. 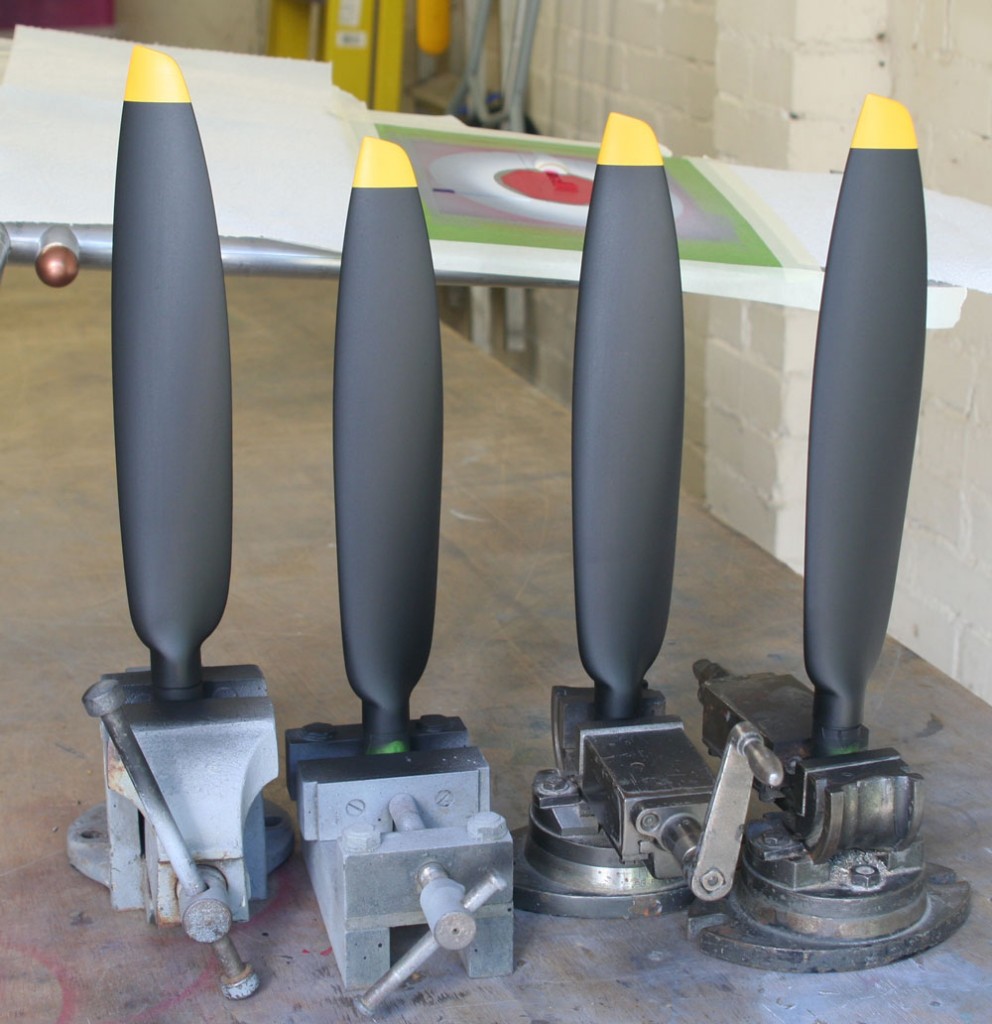 The wing of the model with its underwing roundel can just be seen in the background of this picture. 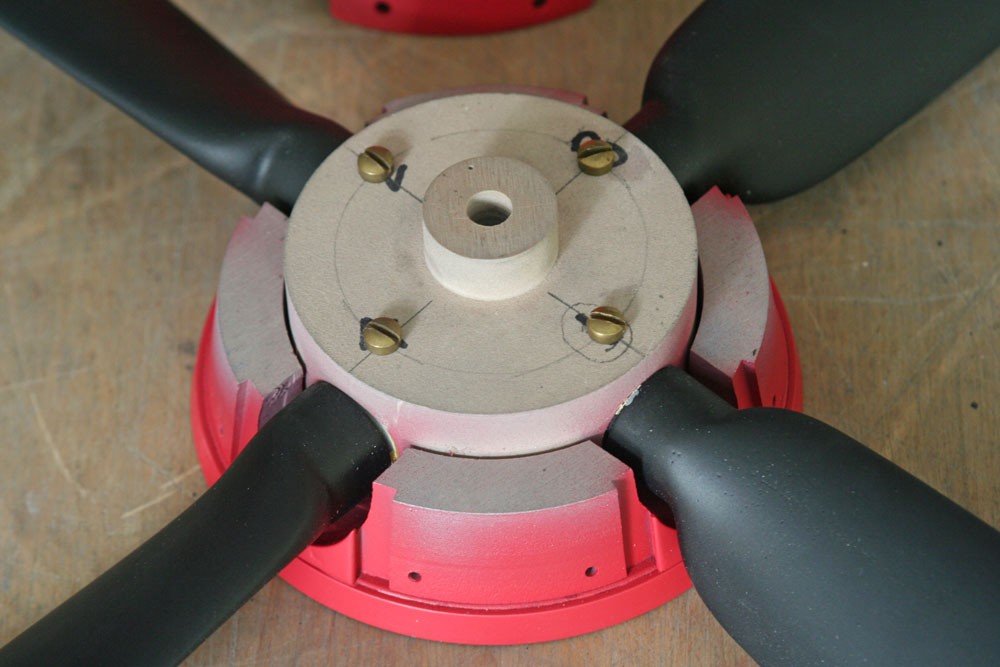 All four blades assembled together on the spinner backplate. The boss was turned many months previously from a high-density model board. This is strong enough to take self tapping screws which secure the prop blades in position... 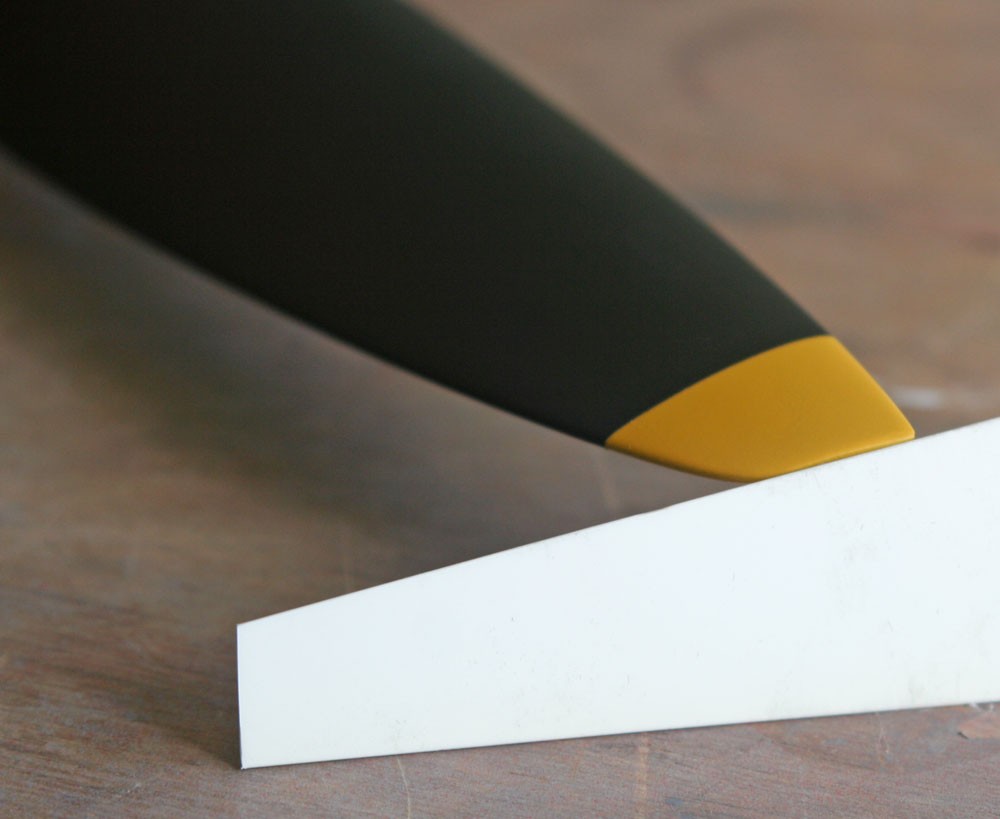 ..after the correct pitch angle of 12 degrees has been set with the help of a simple template. 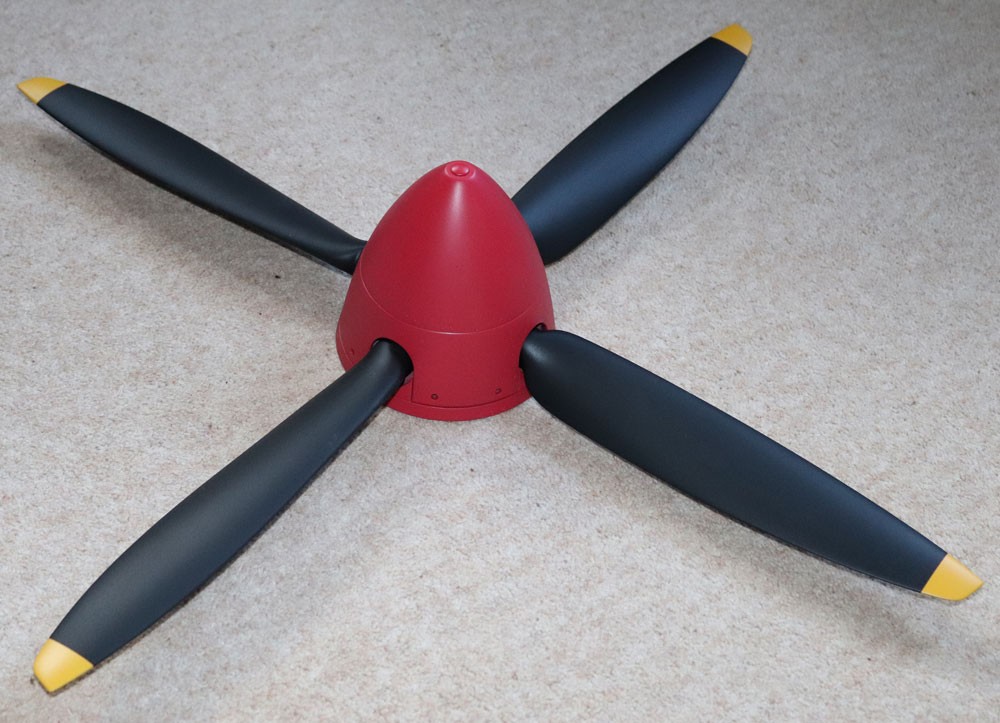 The finnished Rotol airscrew assembly, well worth the many hours it took to build.