With the completion in July of the ailerons, the metal skinning of my Spitfire was very nearly but not quite done: Two small blackened patches of balsa remained port and starboard – a nagging reminder that I had yet to install the leading edge wing root fillet panels – and herein lurked a sting in the tail.

I had long ago conceded that the severe ‘wrap-around’ shape of these two items would be a tall order, given my limited skills as a ‘panel beater’, and that it would be prudent to make them in two pieces, one for the upper wing surface and the other for the underside, with a discrete abutted seam running along the apex of the leading edge.

I installed the underwing members some time ago, and now I approached their upper parts with trepidation: the severe counter curvatures would be tricky to capture, and to make things worse, the requirement for prominent blisters port and starboard would greatly exacerbate the challenge. Moreover there was also a rectangular gun camera access plate to worry about, and cutting accurate apertures in super soft annealed litho-plate is not the easiest of tasks.

I have described in previous posts how, with a little practise, a neat and tidy blister can be produced surprisingly quickly and easily, simply by forcing well annealed litho-plate down into a pre-formed aperture cut in 1/8-in. Or thereabouts sheet metal. Once made, I like to reinforce the delicate blister internally by backfilling the cavity with rapid hardening car body filler. So far so good.

My starting point was to mark the exact location of each blister on the model, and then, with plenty of excess material all round, I began the process of impressing the shape of fillet panel using the model itself as the former.

I have written about working softened litho plate many times, and the one thing that I always emphasise is not to give up. Don’t be surprised if during the early stages of massaging and coaxing the metal into shape, it becomes a wrinkled and distorted mess. With patience, perseverance and repeated careful application of heat from a small blow torch, what seems beyond redemption more often than not comes right in the end.

It greatly facilitates the work if the superfluous metal around the margins of the job can be trimmed away progressively as the three-dimensional shape emerges, because the less material there is the more easily the part can be made to conform to the desired contours. At the end of the process there should be no more than a few mm of excess all round, at which point the piece can be taped to the job and its exact outlines projected onto the surface and marked. This can be the most difficult and time consuming stage of the process, particularly if – as in this case – the entire outline of the piece has to be gauged and transferred onto it’s upper surface. It helps here to use a little engineer’s blue dye to assist accurate marking out and cutting.

A word about cutting the aperture for the gun camera cover: Following accurate marking out, my procedure is to carefully drill all four corners of the opening and heavily score the sides (just within the marked lines) with a very sharp scalpel blade, along with two diagonals, corner to corner (Scoring will flatten the pre-formed piece, but the shape can usually be very easily reclaimed.). The next stage is to remove the four triangular shaped interior pieces by carefully waggling then between the fingertips until they crack and rupture along the scored lines. In this way unwanted material can be removed entirely without significant distortion of the surrounding material. Finally, the aperture is refined exactly to the scribed lines, and here, remarkably enough, I find a sharp scalpel blade just as useful as a file: Used crosswise a file tends to distort the soft edges of the aperture, while the blade shaves along their length with minimal or zero distortion, if used carefully.

The rest is relatively easy: After the fillet panel has been glued in place with contact adhesive, its surface can be dressed with fine abrasive papers and steel wool to remove any minor blemishes. Any rivet detail is added next, followed by the ubiquitous fasteners (small steel countersink screws in my model). Here is it vital that the relatively large holes, which are perilously near the edge of the piece, are opened up extremely carefully with progressively larger drill bits. Do it any other way and horrendous distortion of the fragile metal is bound to occur.

This was not a job to be rushed: It took at least two days to form, install and detail three pieces of skin, but at the end of it I could congratulate myself: No trace of the model’s wooden heart remained. The metamorphosis to an all metal airframe was finally complete. 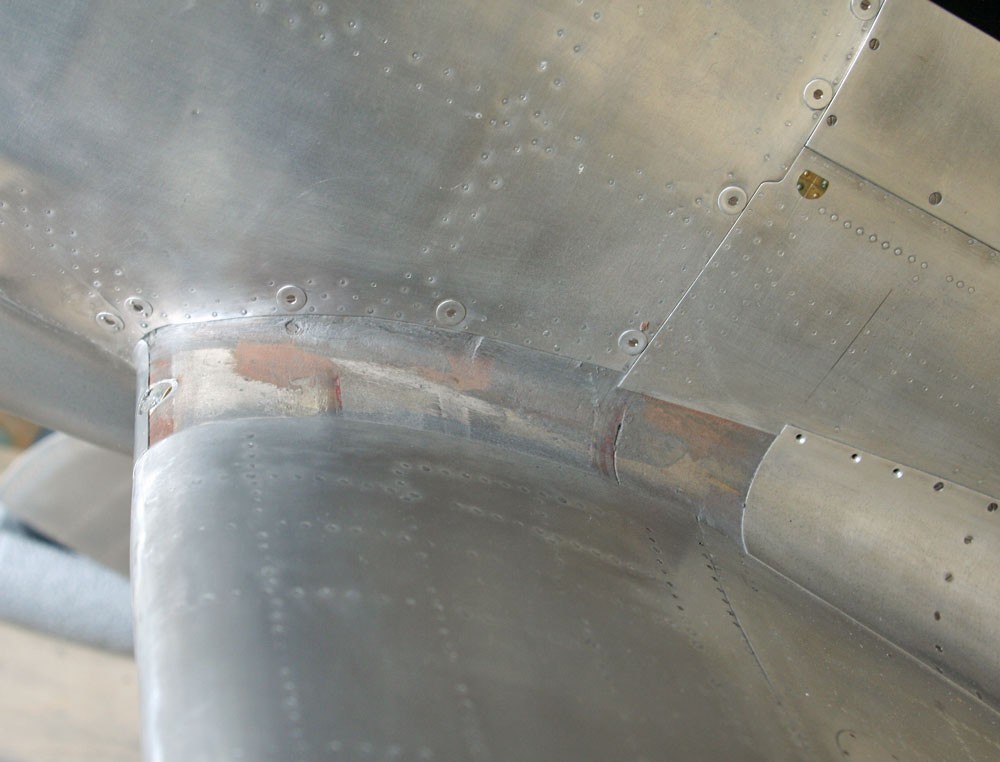 I began to metal skin my Spitfire more than two years ago. Now only the upper parts of the leading edge wing root fillets remain as a reminder of the model's 'wooden heart'. 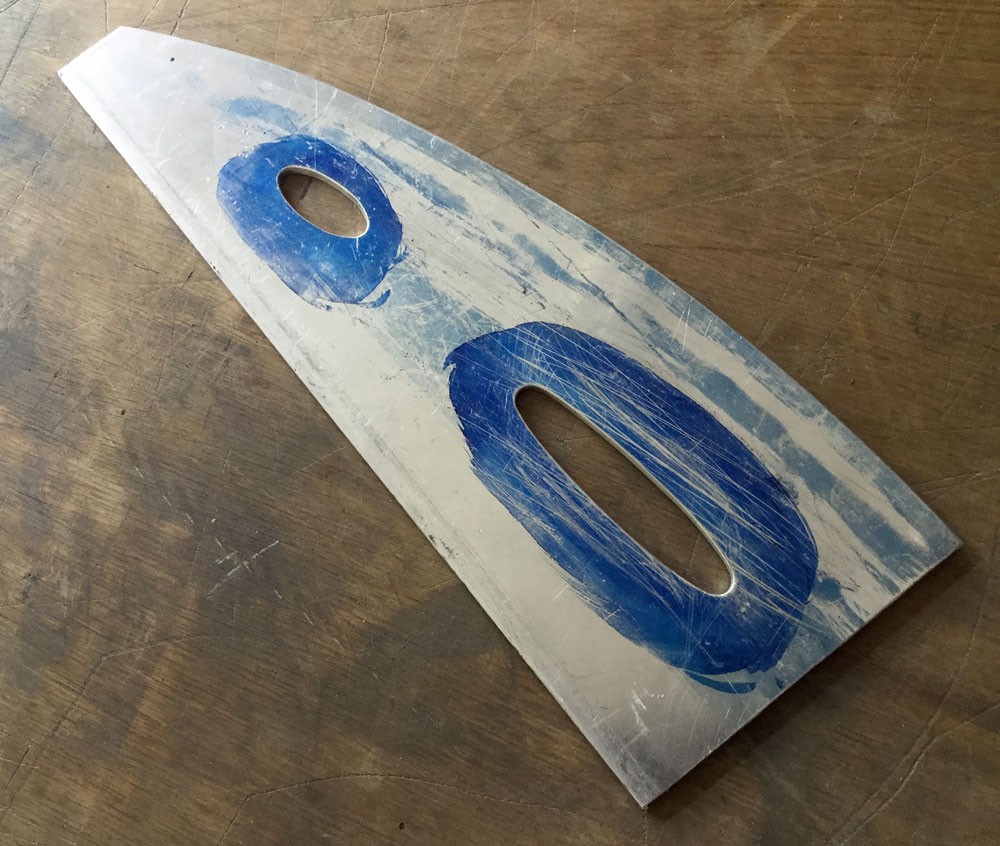 A simple tool with which the two blisters are formed. In the full size aircraft the blisters provide clearance for bulky coolant pipes, the longer of the two appearing on the port side. 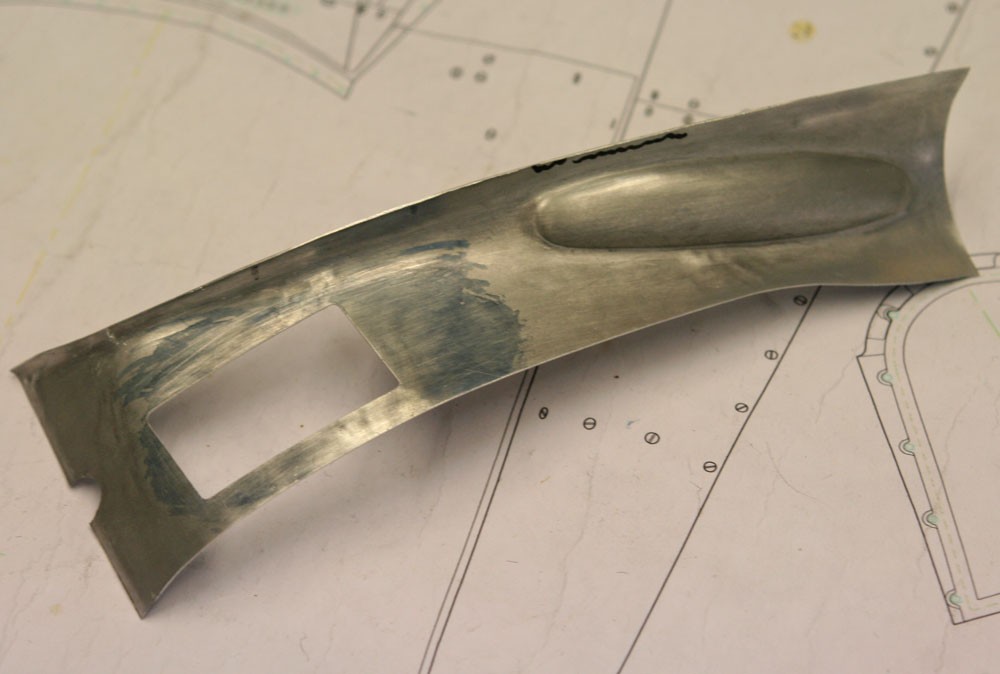 The starboard fillet panel nears completion after having had the opening for the rectangular access plate carefully cut away. 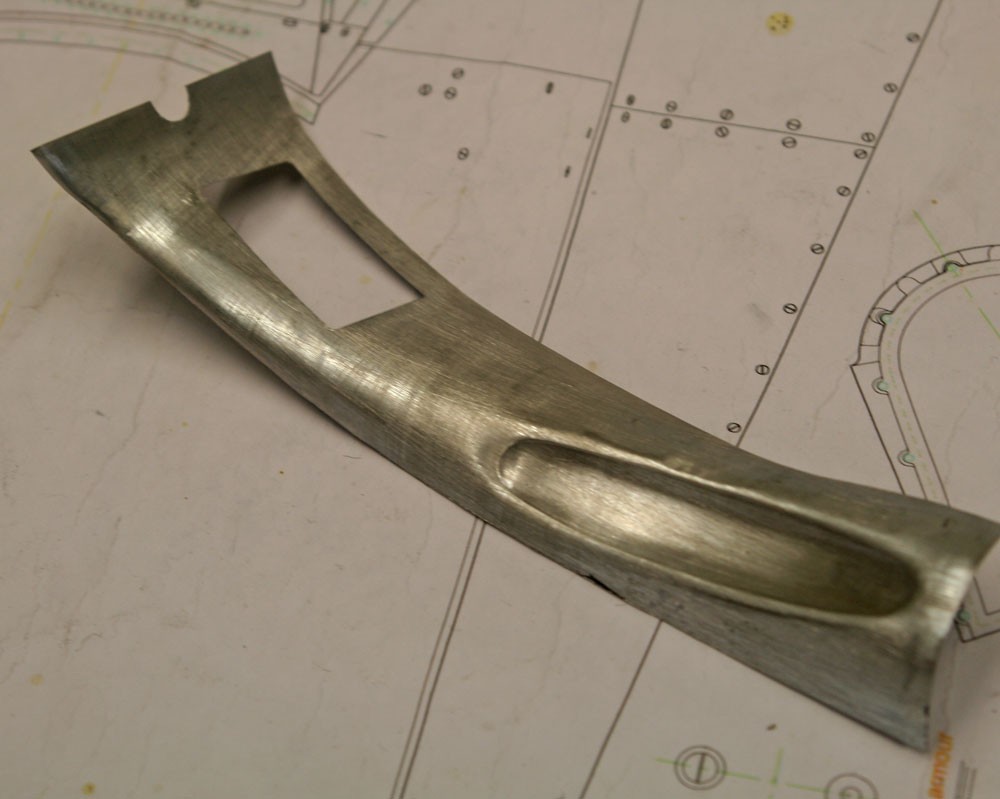 The underside of the part showing the blister cavity which is about to be backfilled with car body repair putty. 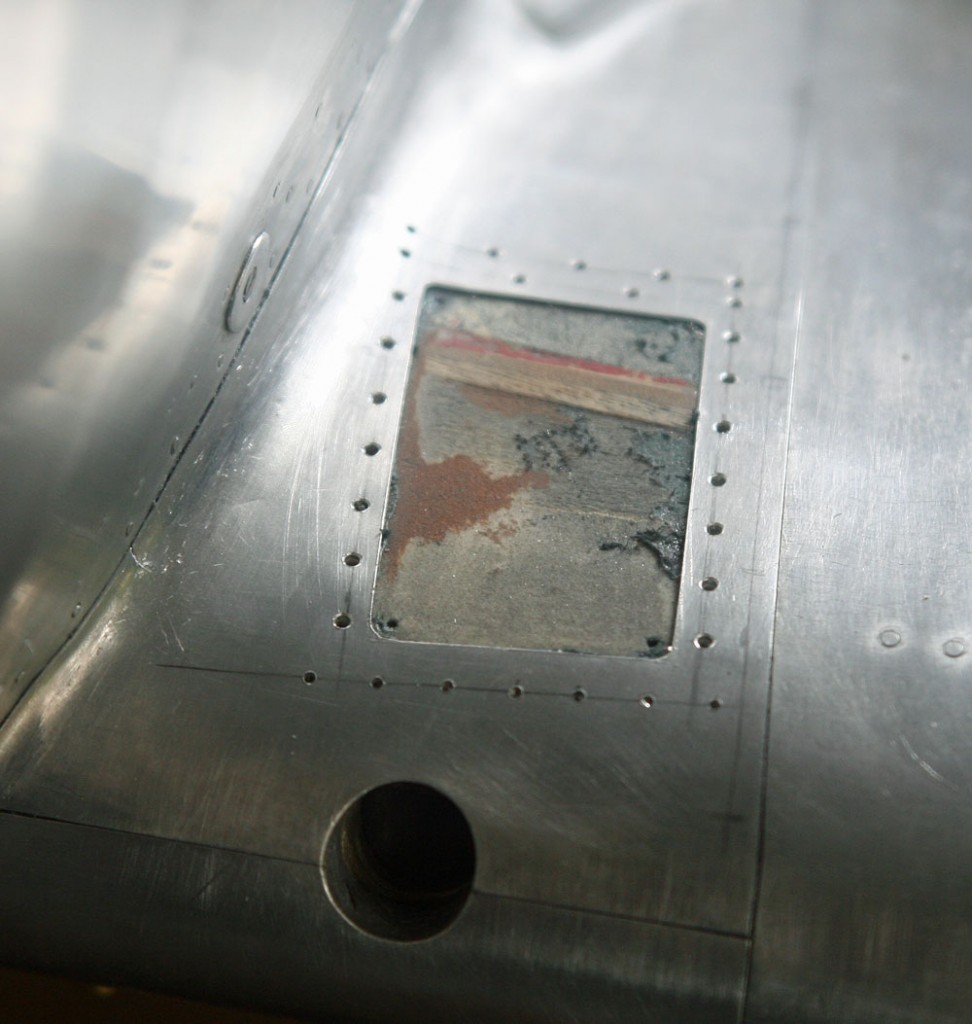 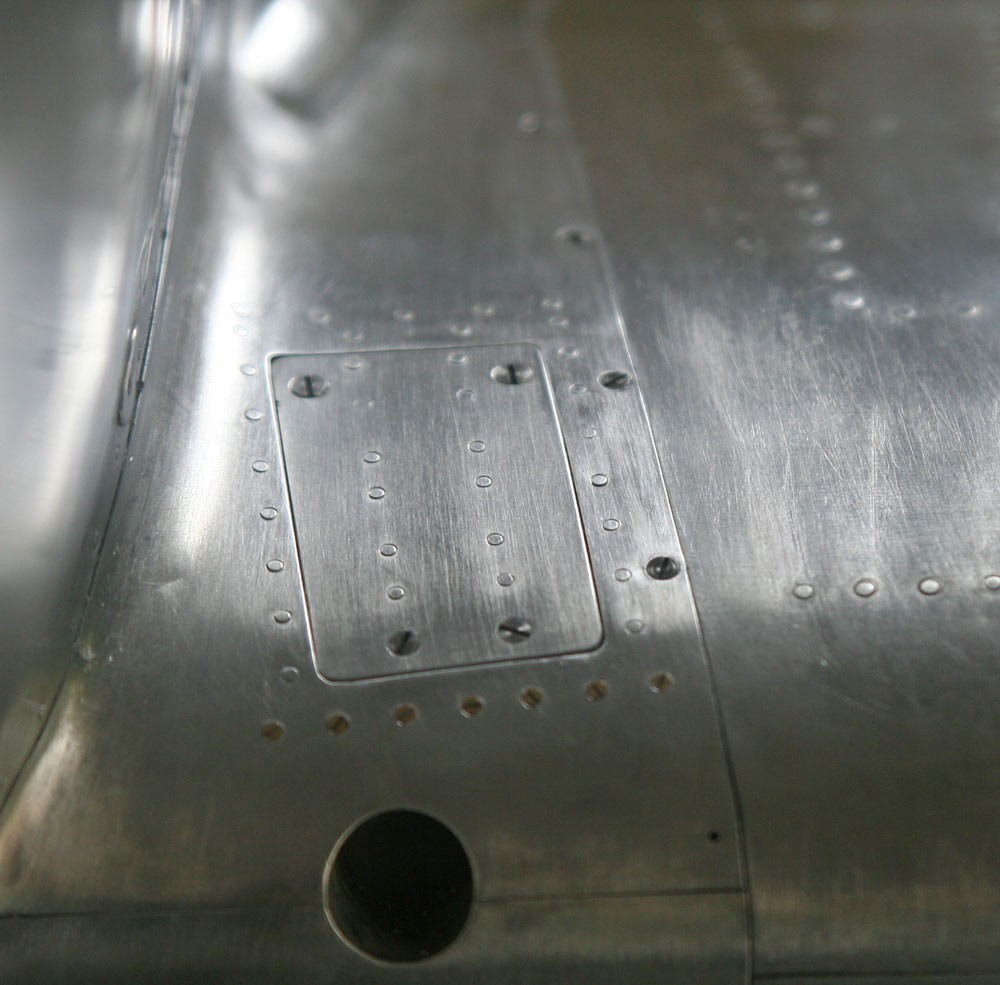 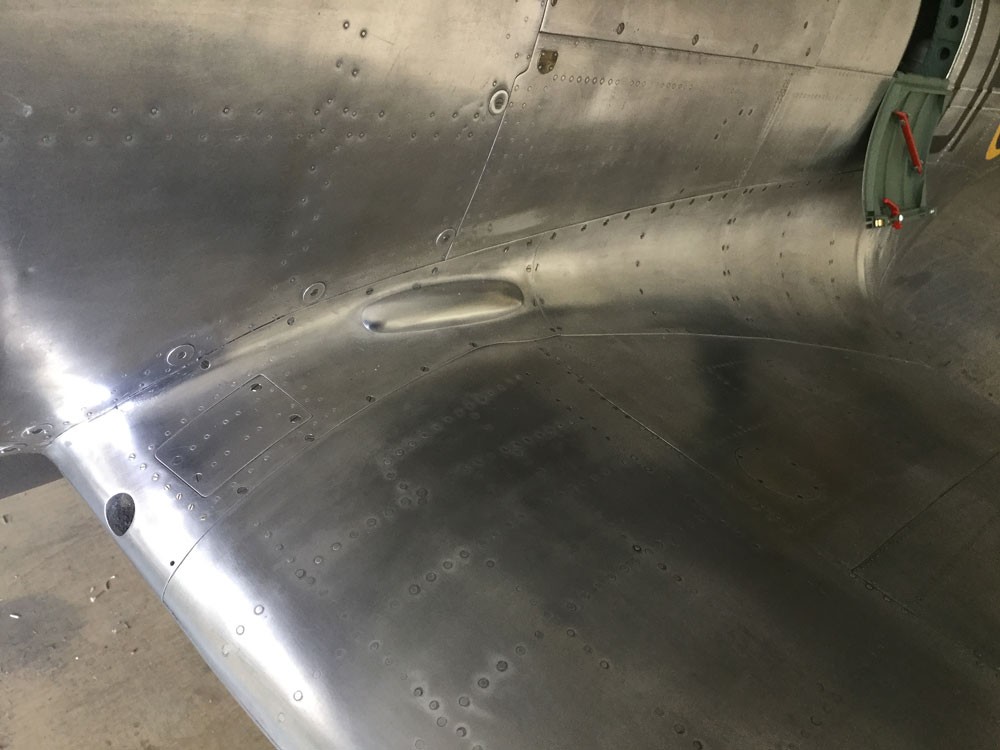 The near completed job. There are imperfections, but all-in-all it passes muster. 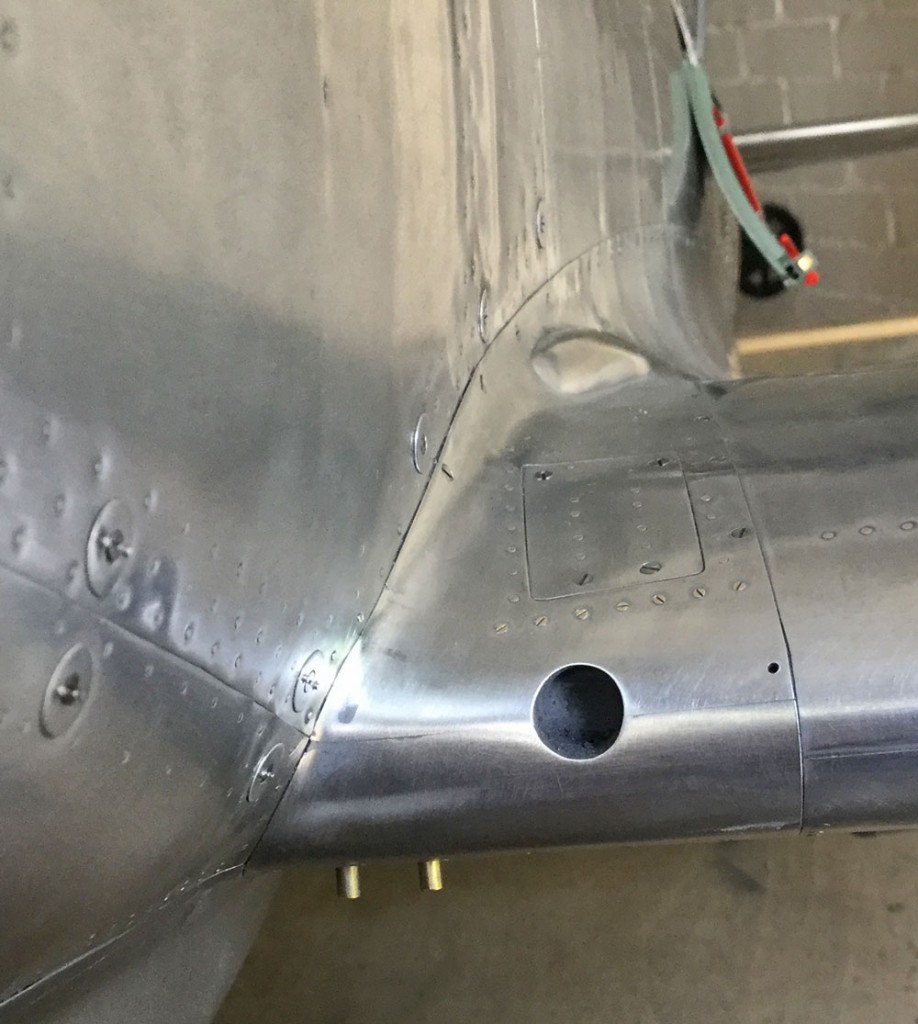 The false seam along the leading edge has been filled and rubbed down and is now almost invisible. A light localised dusting with Alclad will do the rest! 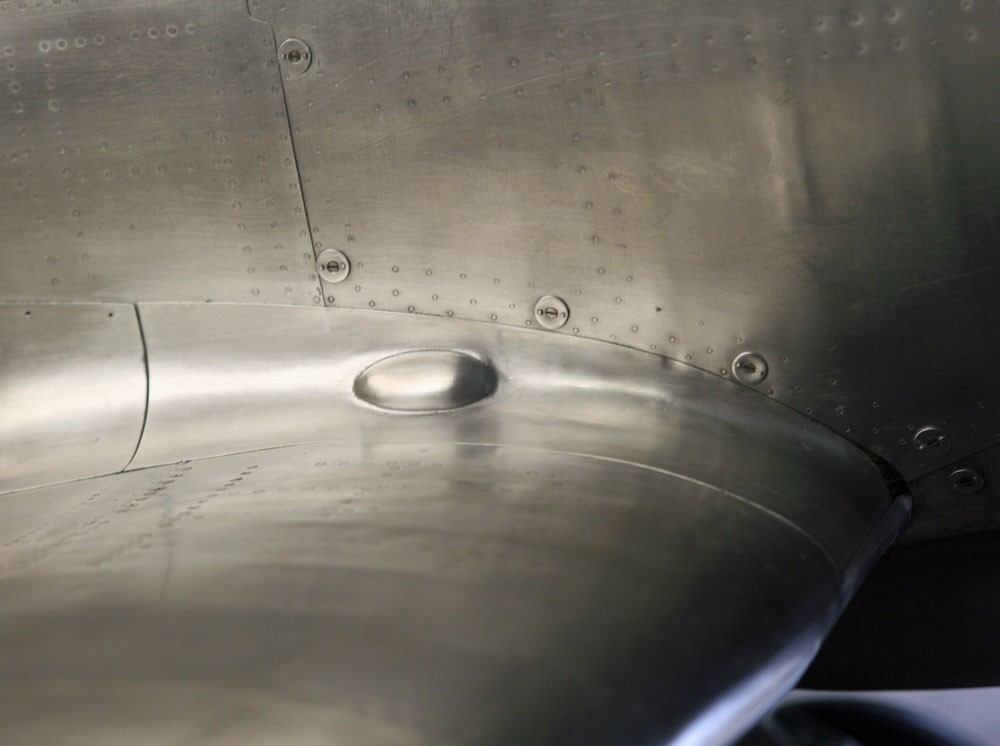 The starbaord side fillet prior to installation of the fasteners, and showing a much truncated blister.