The painting of my model got off to a poor start, and then continued in the same vein, dogged by setbacks. For example, out of the four wing roundels applied, I ended up removing three of them with acetone in order to start over again. Abnormally high July and August temperatures did not help, and there were days when I was up at 5.00 am to spray before the air became too warm.

Particularly challenging were the fuselage insignia. The profusion of dome headed rivets on the flanks of the aircraft made paint creep inevitable, however carefully I applied the paint masks. I even tried cutting around disruptive rivets individually so as to apply masking fluid and/or tiny flexible Tamiya masking tape patches. While this helped it never fully solved the problem. Retouching post removal of the masks with a fine sable brush became as inevitable as it was time consuming.

At the end of a taxing six or seven weeks I gave myself eight out of ten for the paint job. But perhaps I’m being harsh. The model does look very smart in its striking bare metal 601 Squadron livery. And I’ve always been my own worst critic.

I chose Phoenix Precision Paints, which are high quality and durable colours designed for model engineers, particularly of the live steam locomotive variety. More recently the company has added accurate shades for the aero modeller, including “RAF roundel red” and “RAF roundel blue”. However, the Phoenix catalogue does not specify that these are the post WW2 colours, which are much lighter and brighter.  Incredibly, when inspecting the tinlets that arrived through the post I failed to notice this; worse still, in a moment of jaw dropping loss of concentration, I actually sprayed a complete underwing roundel before realising the very obvious miss-match. The time wasted spraying was nothing against that subsequently spent in mixing my own shades to match the deep Prussian-like blue and the brick red (almost a red-brown) characteristic of the war years. Yes, I was determined to stick with Phoenix, come what may!

Phoenix supply an acid etch primer suitable for non ferrous metals, which I used successfully when painting my P-51D Mustang.  This time though I opted for a ‘shortcut’ in the form of one of the aerosol spray etch primers available in automotive stores. This was not entirely successful, since a patch of paint from one of the upper wing roundels lifted catastrophically on removal of the mask!

My paint masks were custom made for me by Mal Mayfield. His “Miracle Masks” combine the highest quality materials with meticulous dedication to detail, both in researching the subject and in drafting and scaling. Thank you, Mal, you did me proud. Mal supplies detailed instructions – indispensable, given the multiplicity of some of his sets. My masks for the roundels, serial numbers and codes are basic by comparison; nonetheless their enormous size meant that I had to depart somewhat from Mal’s SOPs in handling and applying them, as can be seen in some of my photographs here.

Spray painting is not my strongpoint. Moreover, having invested a goodly part of my retirement creating the model’s fine skin detail, including approximately 18,000 individual hand inserted rivets, I am naturally reluctant to see countless hours of work partially obscured beneath a non-scale thickness of paint!  Hence my choice of the attractive yet ‘minimalist’ bare metal livery of 601 Squadron in the Mediterranean.

However, my interpretation includes a very obvious compromise. There is a widely held view that at least in some juncture in its operational history the entire top cowling and fuel tank armour of MJ250 was in standard grey/green camouflage (presumably the result of a field replacement). Given the poor quality and ambiguity of the few surviving photographs of the aircraft, this is not universally accepted. Moreover, in evoking their version of this same aircraft, the Battle of Britain Memorial Flight elected to leave the cowling and armour ‘unpainted’.  Whatever the facts of the matter regarding the original aircraft, I was obliged to paint the top cowling of my model to conceal an extensive repair of my own (see dairy entry “Top Cowl and a Major Setback”). The grey green option I eschewed as potentially jarring, especially on a museum model; while a painted aluminium effect – however realistic – would be detectable and therefore incongruous against real bare metal. Thus I decided on a feature entirely of my own choosing… and the black anti-glare panel does look rather smart. 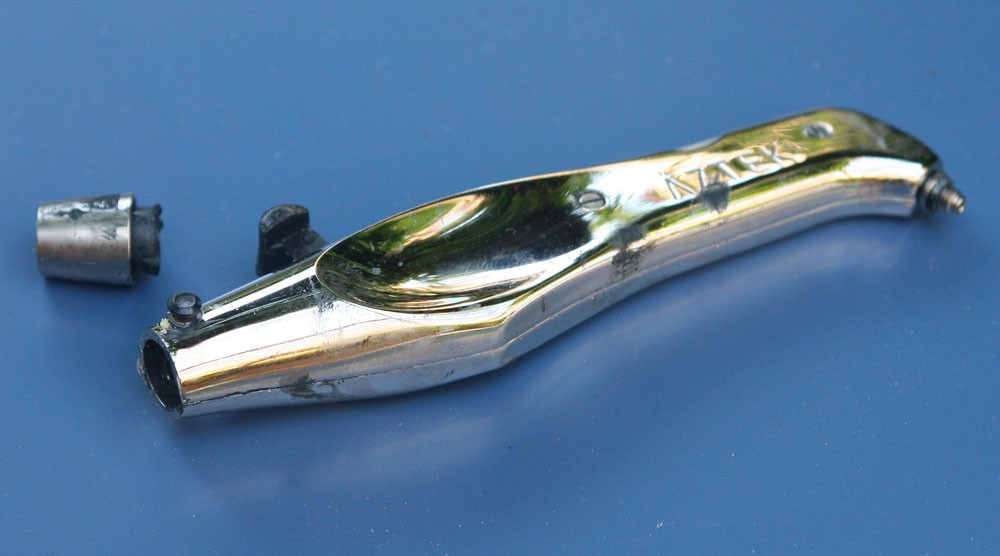 Gremlins: My brand new top-of-the-range Aztek air brush – a total write-off after I dropped it on my workshop's concrete floor, and that was just the beginning! 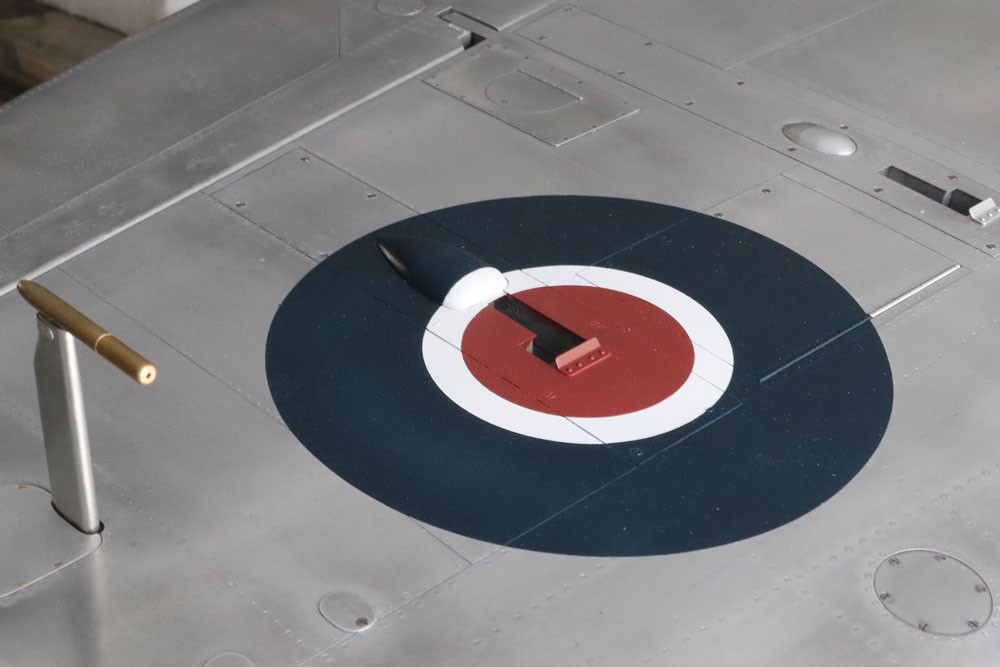 One of the two small underwing roundels, this time in the correct shades of blue and red. Both of these had to be applied before the model could be turned over onto its undercarriage for the first time. 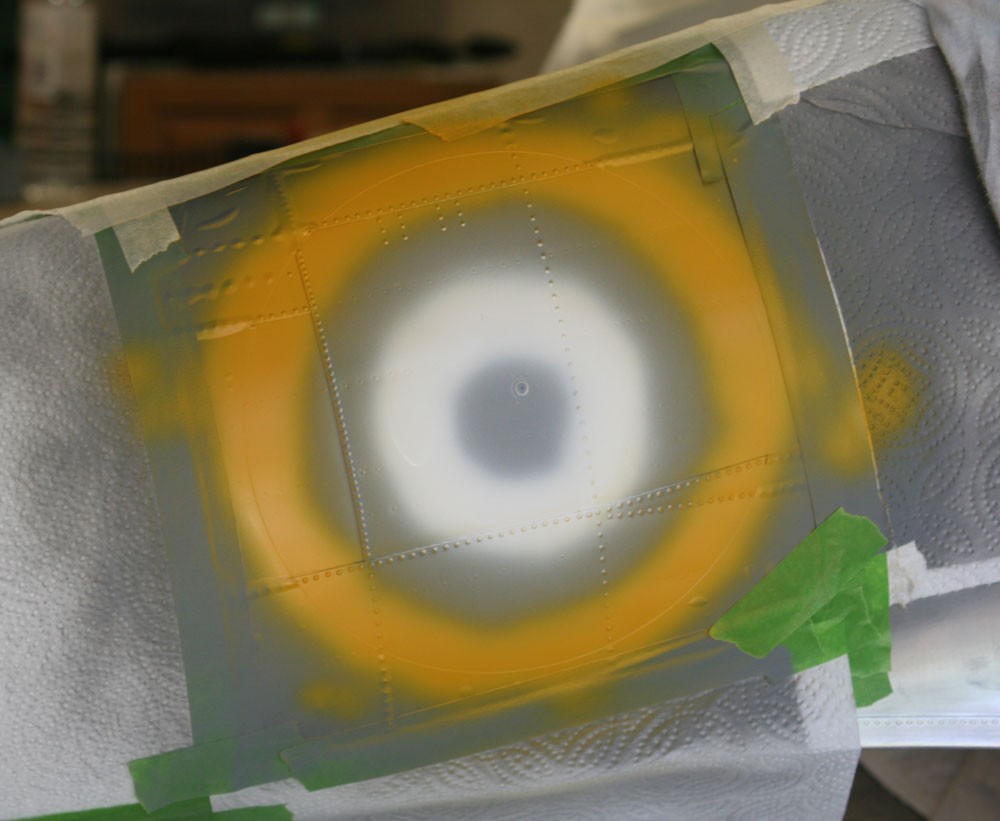 Early stage in spraying the fuselage roundels: With the peripheral paint mask in position, the "trainer yellow" and white areas can be airbrushed by eye. 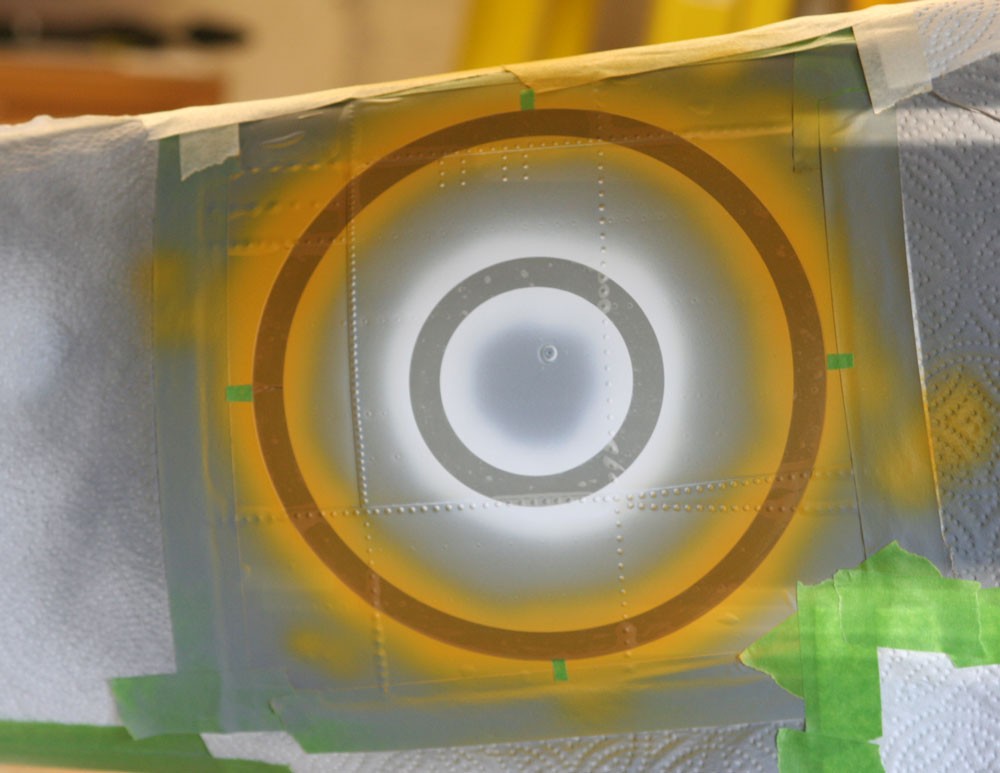 The yellow and white bands have now been masked... 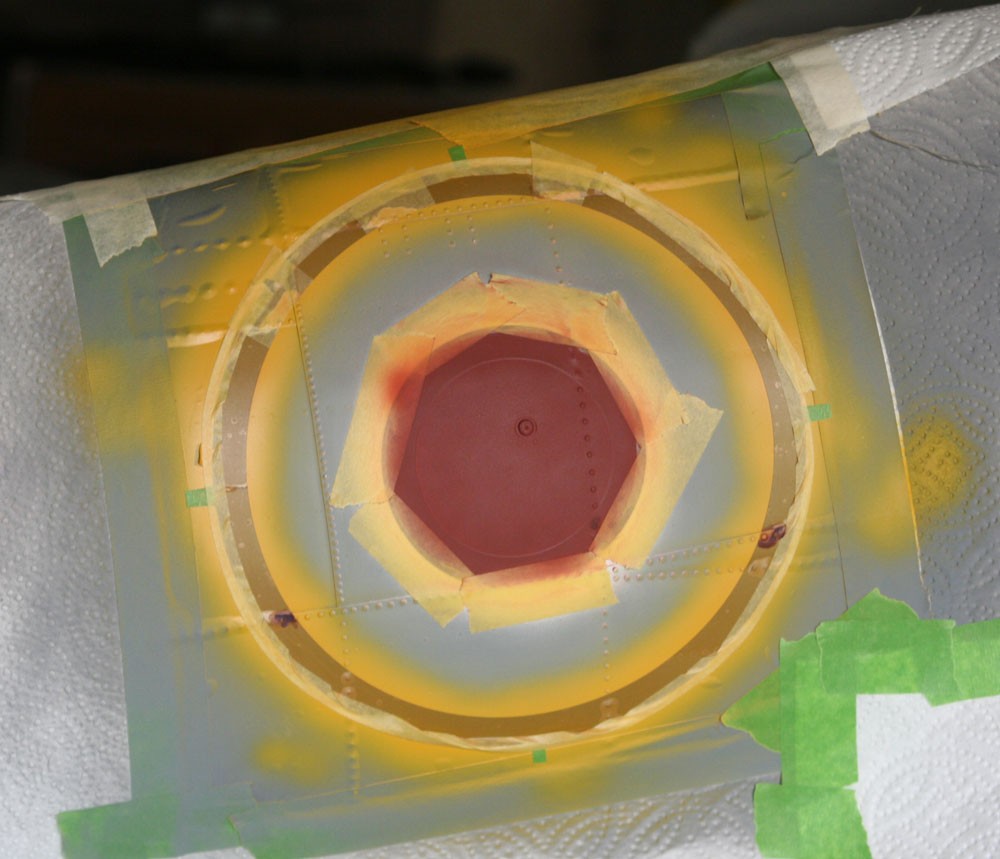 .. and the red area sprayed. Once the red paint has thoroughly dried it too can be masked over. 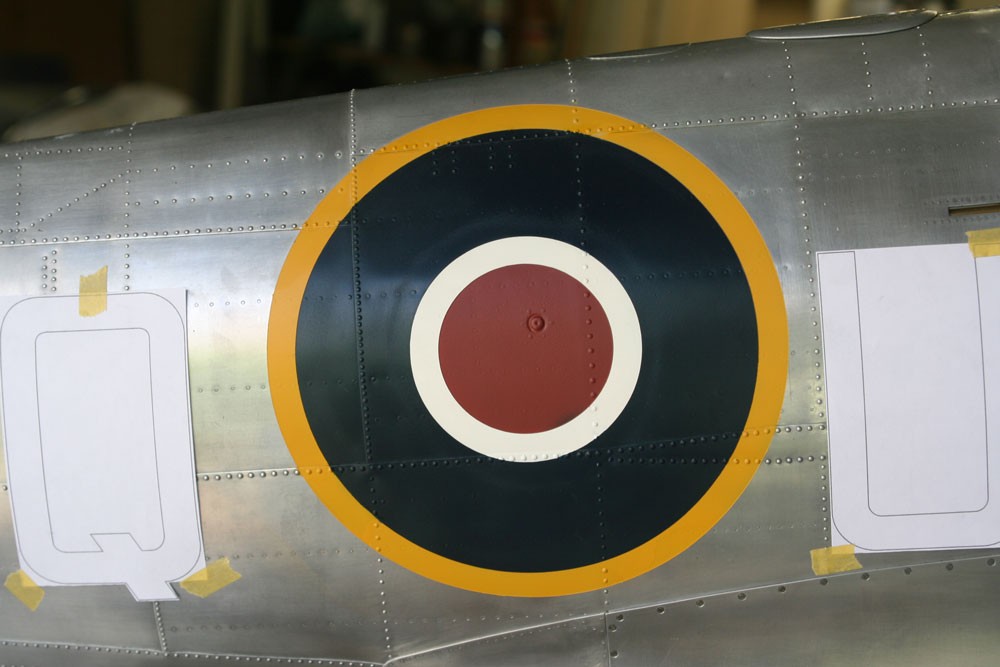 The blue is the final colour to be applied. The radio antennae insulator can just be discerned still protected by a film of Humbrol masking fluid. 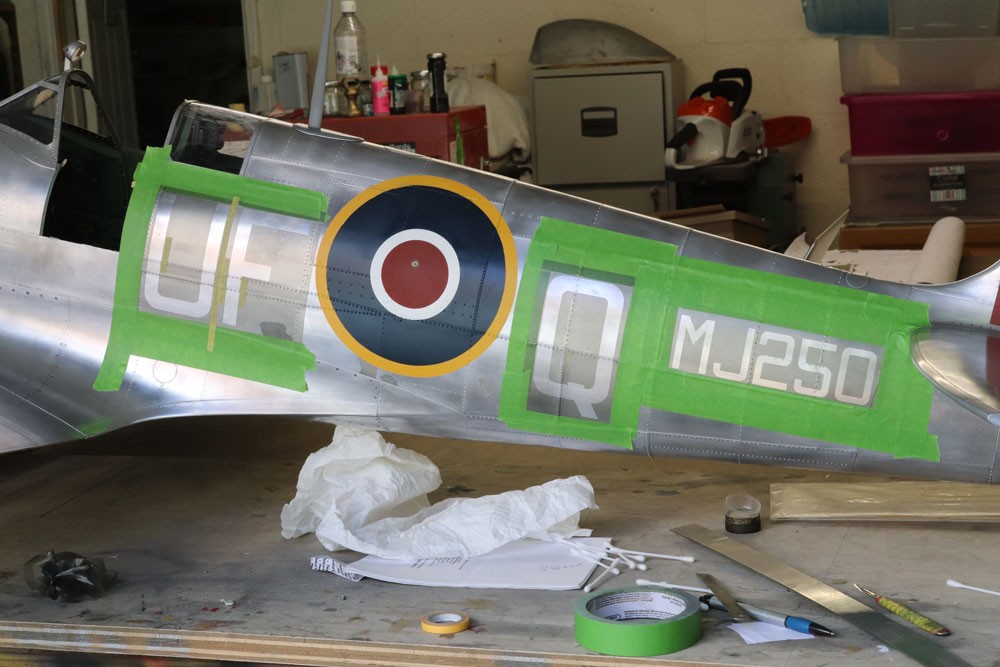 Masks for the codes and serials are aplied next... 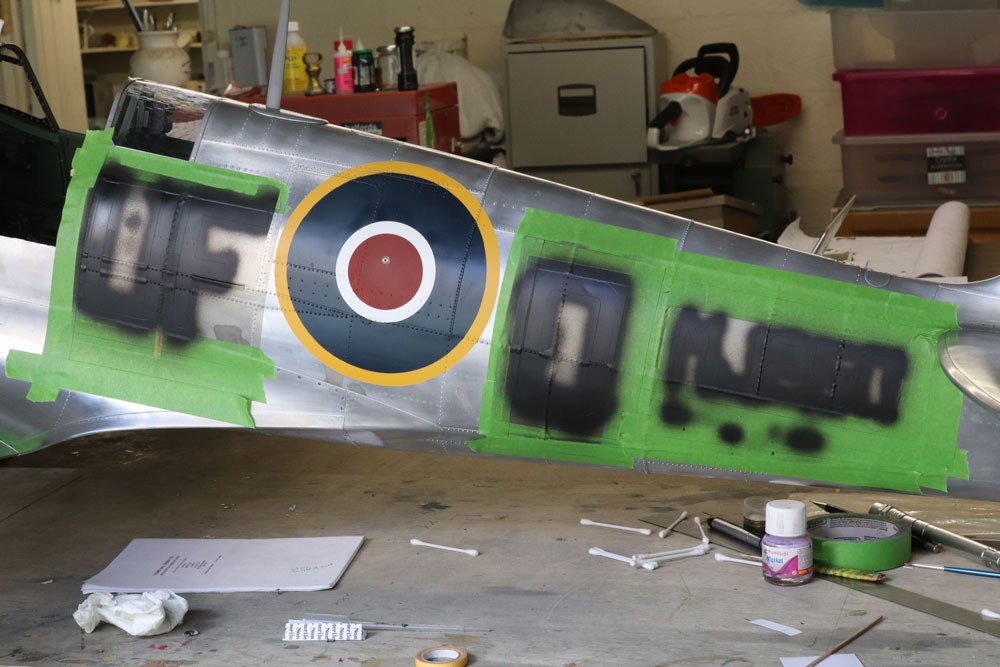 ..and sprayed black (with a touch of white to lighten it). 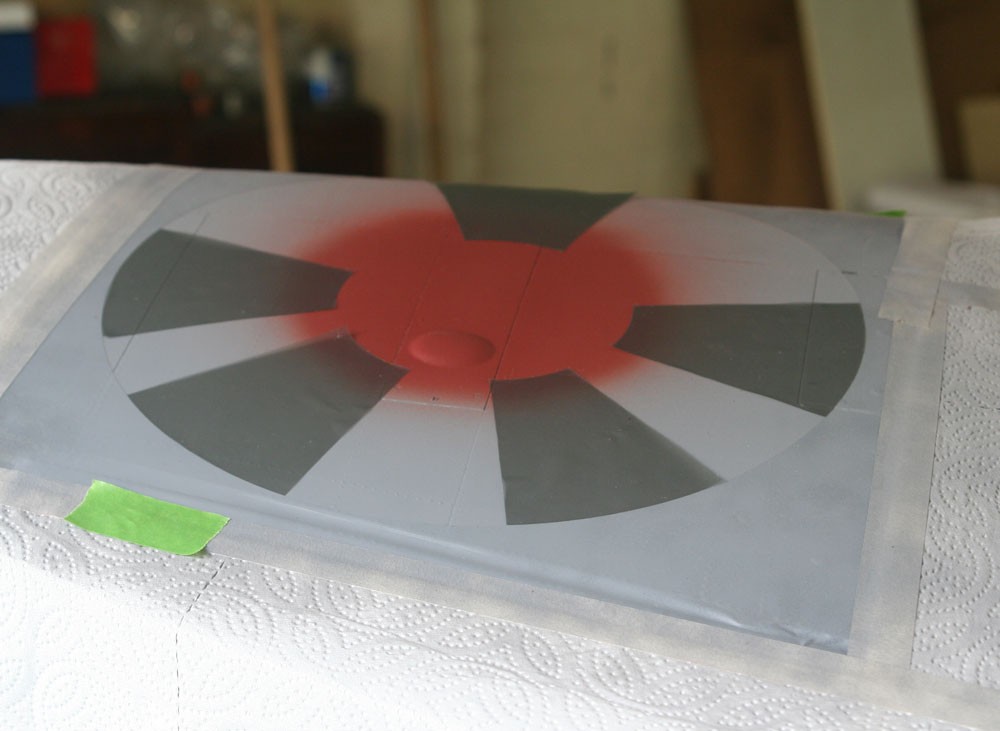 The peripheral masks for the upper wing roundels were particularly challenging to apply because of their huge size. I found the backing paper from some old A4 Letraset sheets helpful here when manipulating the mask into exact position. Once the centre spot had been sprayed I added 'spokes' cut from Mal's blue mask as an aid to accurately position the red mask. 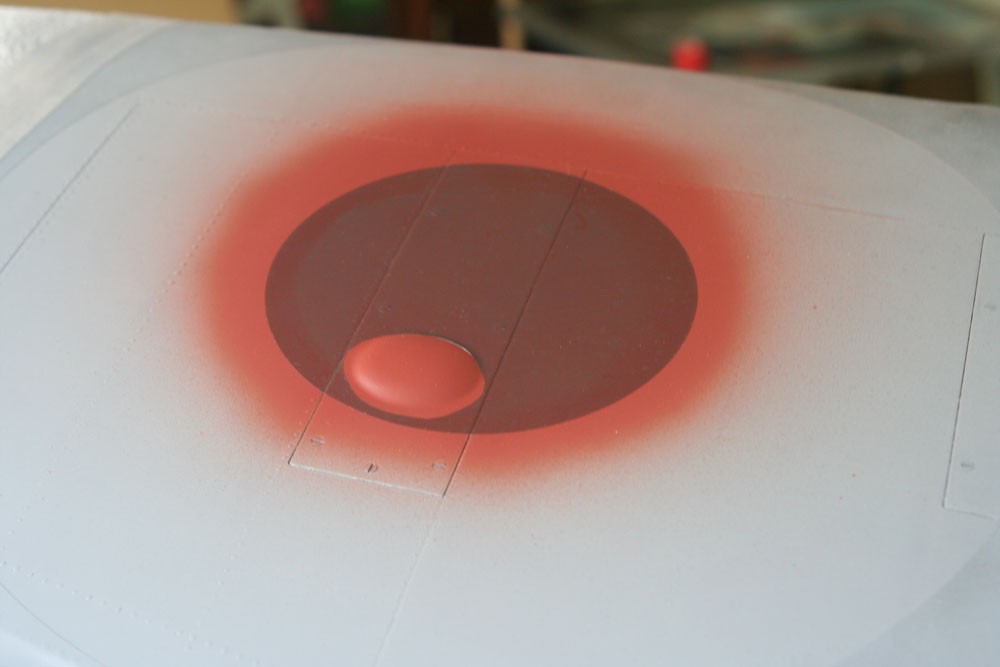 To avoid distortion I cut away a portion of the red mask by way of the blister over the gun bay door. This was covered with tamiya tape ready for spraying the blue area. 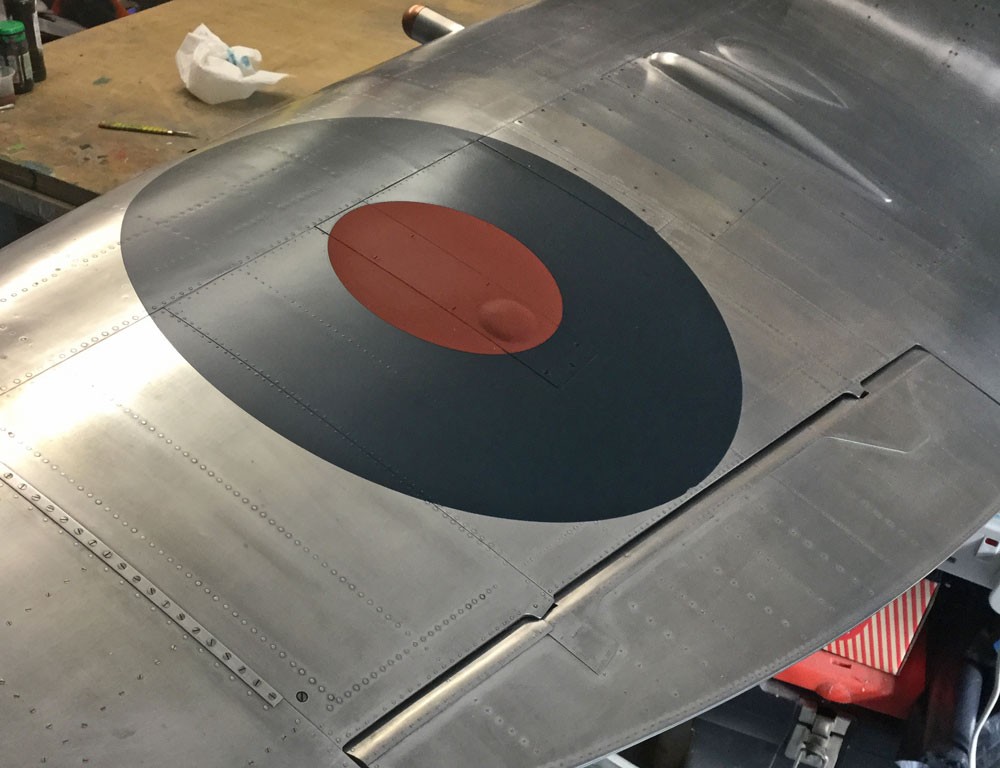 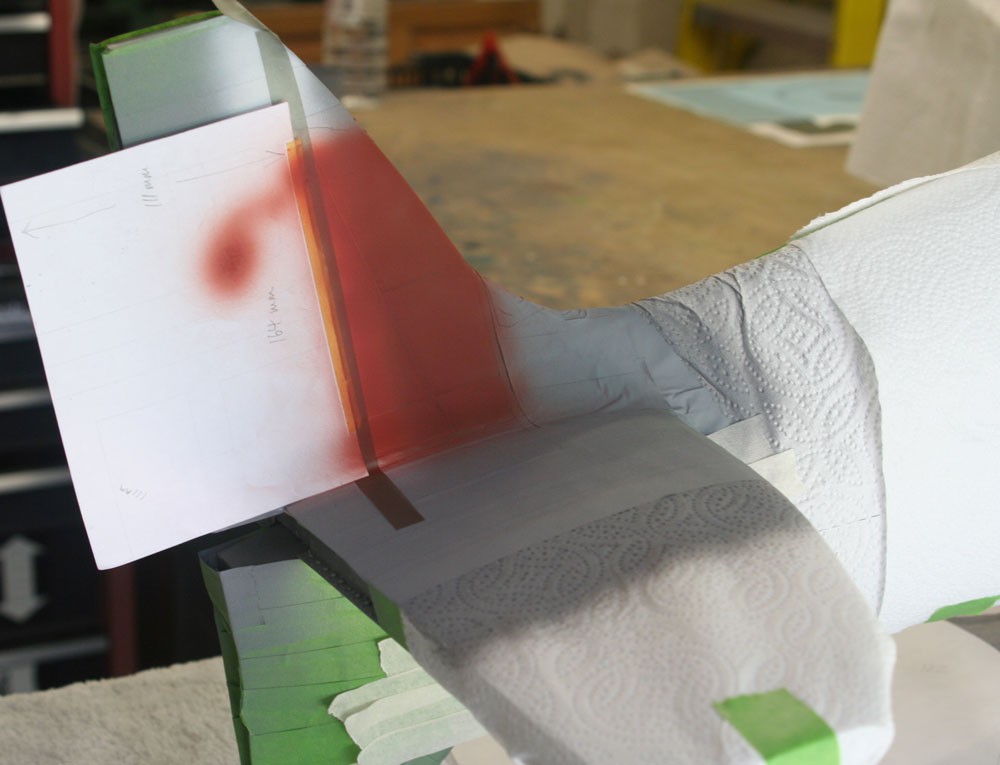 The early stages of spraying the fin flash. This was done entirely with masking tape, and the sequence was white, red then blue.

The result of many hours of work in the difficult conditions of a summer heatwave.