Construction of the cockpit sidewalls followed closely that of the underbelly, departing only in detail. Each rectangular panel supports three intercostals of either top-hat or Z section, the fabrication and detailing of which was covered in my October 23 blog.

Because the cockpit walls are more accessible than the floor, I decided that their built-up detail could safely be added sequentially after installation. As the pictures show, only the port and starboard panels immediately forward and aft of Frame 8 were pre-fabricated and sprayed prior to being glued into place. The foremost pair required some finished detail, which included electrical cables and, on the port side, a prominent junction box. This is also shown in the accompanying photograph. Cables in Spitfires were often skeined and protected by being wrapped around with tape, and I copied this by using fine strips of (what else?) insulating tape!

As in the belly area of the model, I glued each styrene panel in place onto landings integral with frames and longerons before laminating the exterior side with sheet balsawood, so that when the time came the entire exterior of the airframe surface could be sanded back precisely to the plywood sections. The thick, slow drying cyanoacrylate provided an immensely strong bond and a very rigid structure overall.

The work proceeded quickly and brought me to a landmark in the model’s progress, for once all 12 side panels had been installed I could safely remove what was left of the axial plywood web and its reinforcing batons, fully opening up the cockpit interior for the first time. I use the word ‘safely’ advisedly, for until the event there was always a lingering doubt that some movement might occur.

All that remained now was to install the brass and aluminium intercostals and other structural detail, including flanges for the mainframes, which I made from styrene strip. By far the most time consuming task was the internal rivet detail, a protracted job in the best of circumstances made doubly tedious by having to work in a confined space. But by about mid-September, work had progressed sufficiently to allow me to spray paint the sidewalls aft of Frame 8 and the whole of Frame 12.

So finally, the lower half of the cockpit is ready for fitting out, a task that hopefully I will be able to complete over the winter so that by the spring or early summer of next year I can safely bolt the fuselage and wing centre sections together permanently. However, before that I will need to begin work on the outer wing sub assemblies, not least to establish the correct dihedral, which will involve emplacement of spars and other major structural elements. So I may be optimistic in my timetable. 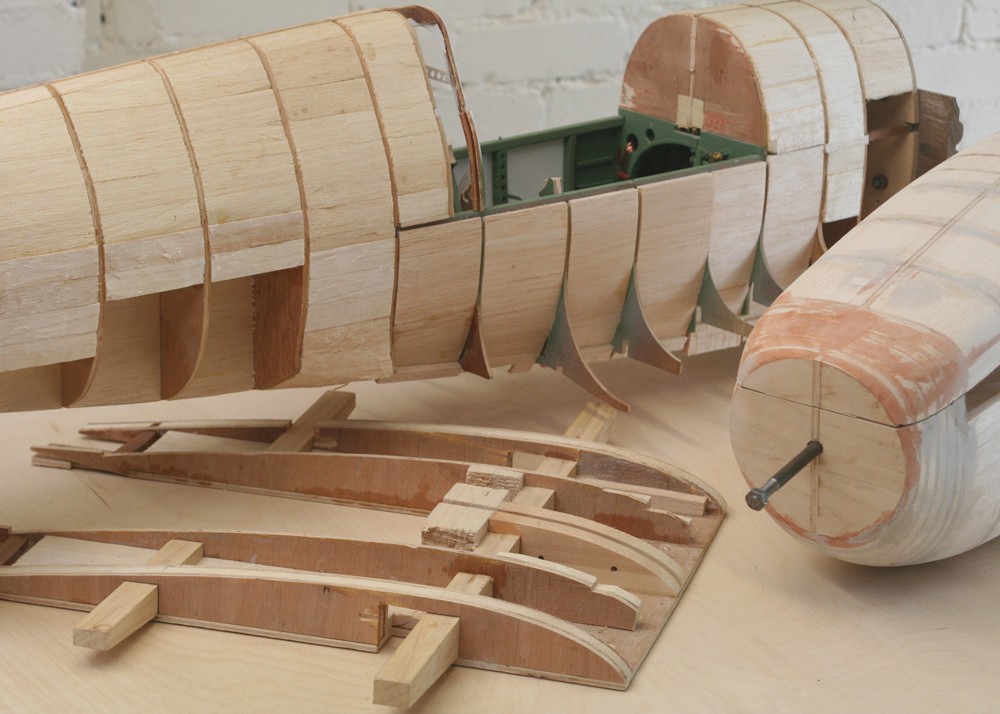 The fuselage pictured shortly after installation of the cockpit sidewalls. I plan to complete the cockpit as far as I can go before attaching the nose and wing centre sections. This is primarily to aid handling during the fitting out process. 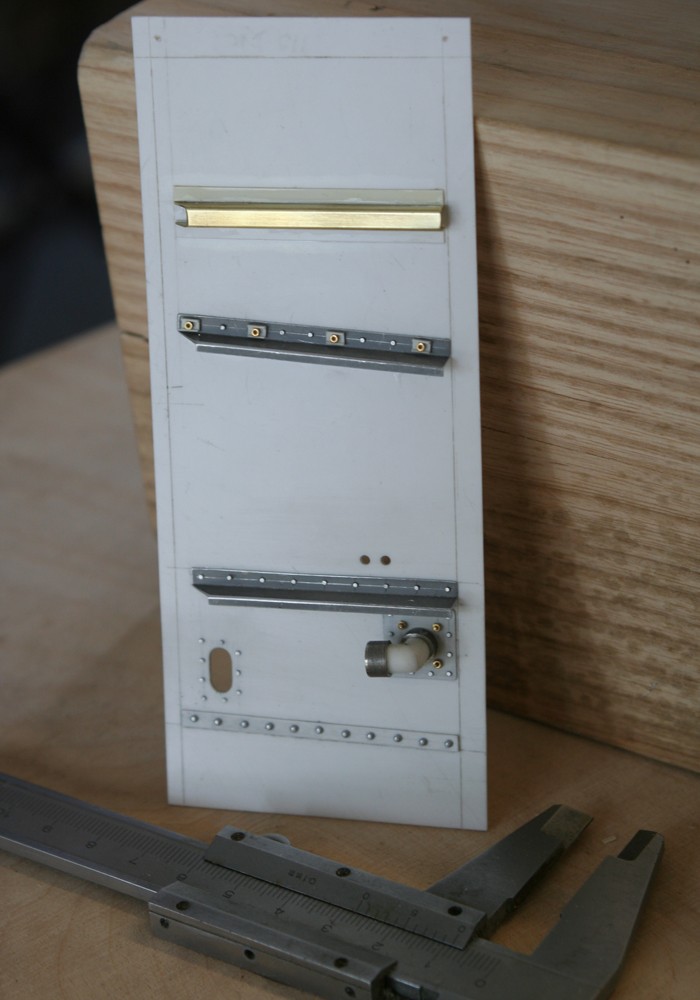 Work on the sidewalls began with the panels forward of Frame 8. Note the topmost intercostal still awaits rivet detail. 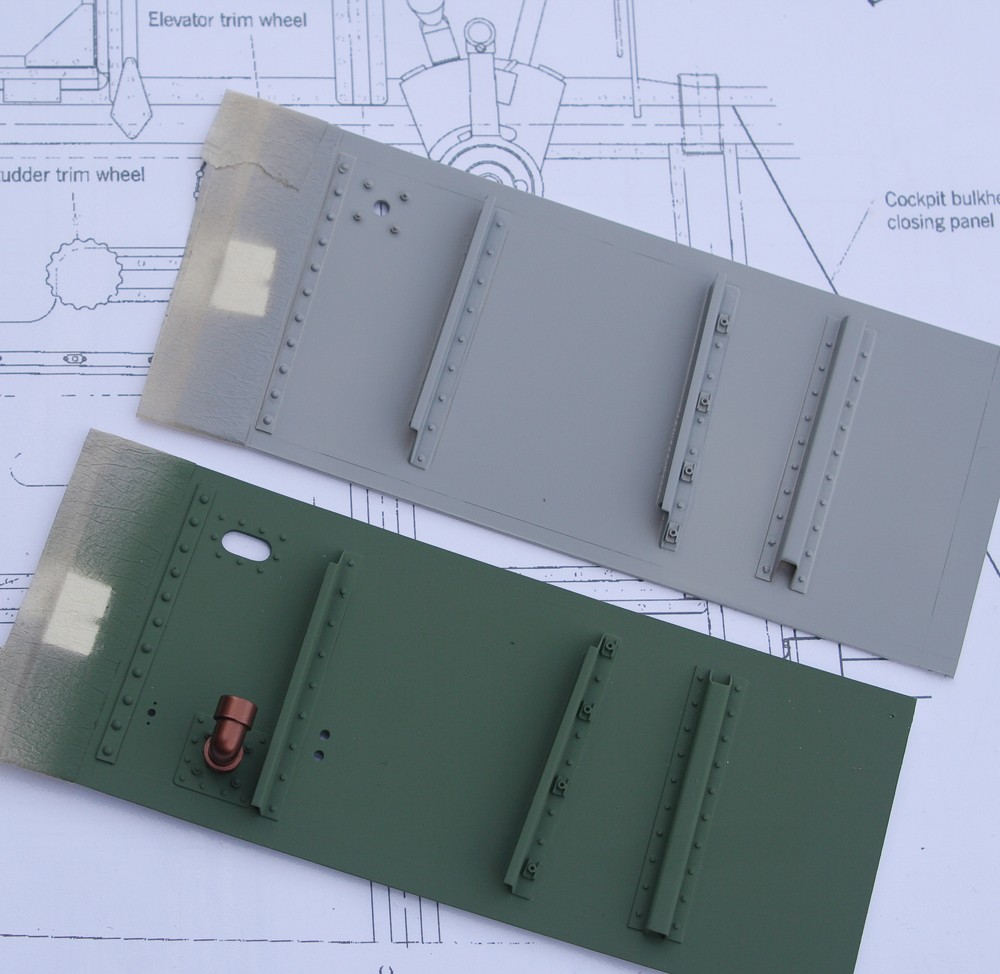 Since detailing and painting would be impossible after installation, these panels were prefabricated. 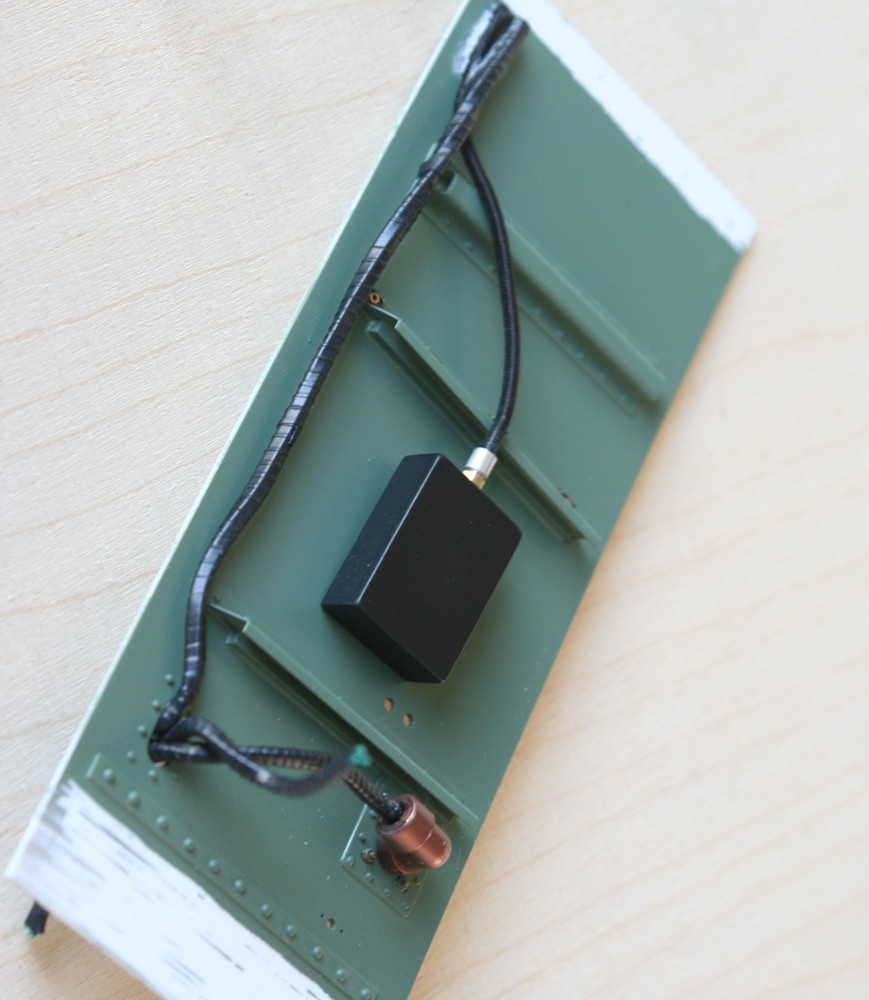 This included the addition of part of the electrical system. 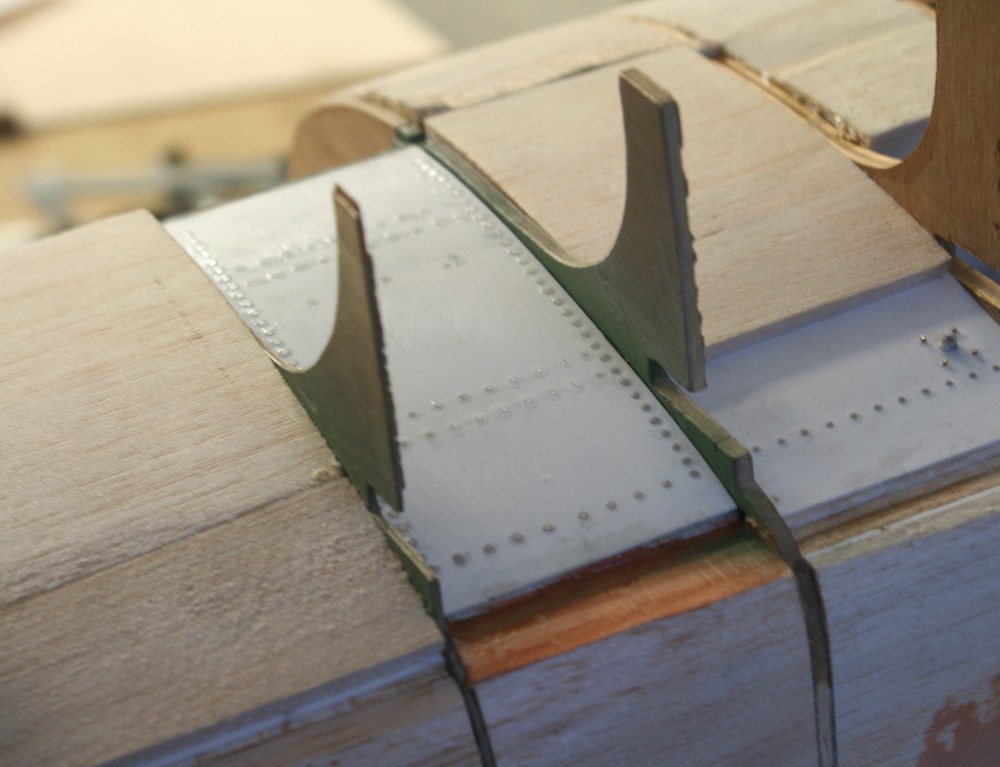 One by one the skin panels were installed and laminated with sheet balsa. Here the last panel has been glued in place. 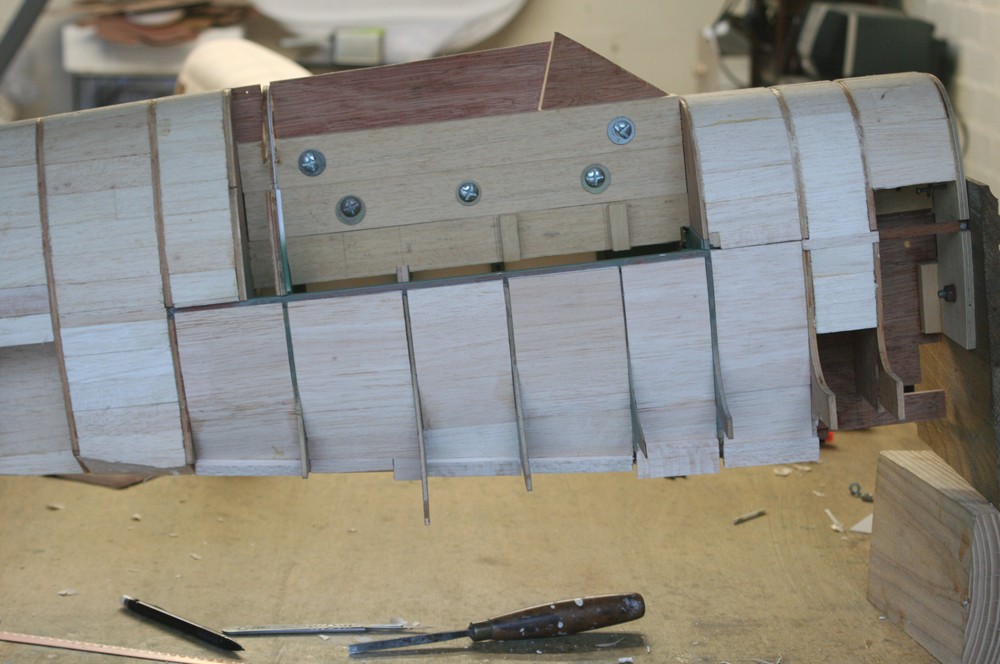 Finally, the now redundant support structure along the fuselage mid-line can be removed... 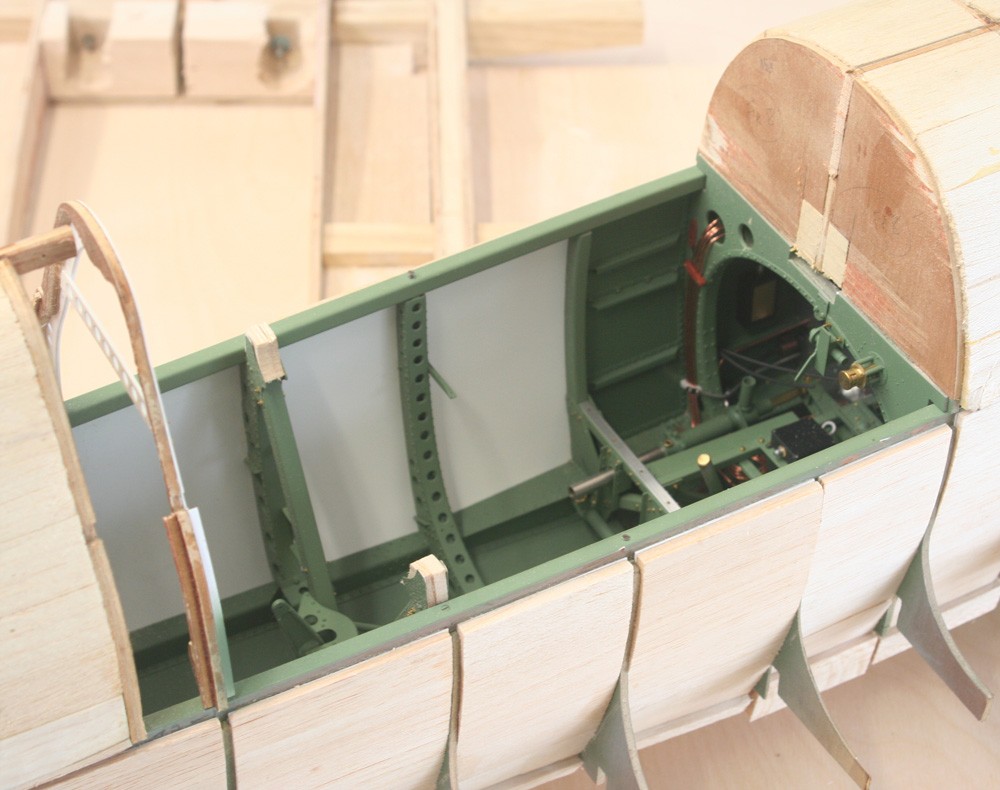 ..leaving the fuselage open and accessible for fitting out.