By mid-March, and with the tail wheel assembly complete, I began work on the wings, resurrecting from storage the two plywood sheets marked out and cut very nearly a year previously. To begin, and with the job still in the flat, I cut apertures for the quasi-circular wheel wells and those adjacent open areas that will be visible around the wheel strut.

Those who have followed my work will be aware that my large-scale models start out as flat sheets of 5 mm thick plywood. Let’s call them basal plates, for want of a better name. They represent the side-view of the aeroplane in the case of the fuselage and fin and plan-view in the case of the main and tail planes. The three-dimensional shape of the airframe is then developed from ply cross sections glued perpendicularly either side of the plate. However, when it comes to the wings and tail-plane, the requirement for a fining-out trailing edge imposes a major complication due to the thickness of the ply. To solve this I make the wing plate in separate parts, using 5 mm ply for the main wing, but stepping down to 1.5 mm sheet for the flaps, ailerons and tips. This creates extra work, but it does provide at the outset a well-defined trailing edge that can be further refined as work progresses.

This approach reinforces the need for a sturdy building board: I use 50 mm thick model board supplied by a company called Alchemie. It comes in large sheets, and its high density makes it ideal as a stable and accurate planar surface over which to secure the work in progress. All of the wing cross-sections share a common datum line drawn chord-wise from the trailing to leading edge extremities. This line corresponds precisely to the underside of the ply plate, so the top half of each rib section has to be cut to allow for the thicknesses of the underlying plywood. The accompanying images should make this clear.

At this point I own up to a compromise: I have deliberately omitted wing ‘washout’ ­– the term used for the progressive span-wise ‘twist’ in the main plane from root to tip – which in the Spitfire amounts to a little over 2.3 degrees. The washout is clearly defined in Paul Montforton’s sections, and experts will doubtless notice its absence. But try as I might, I have yet to fathom a way to reconcile this subtle feature with the otherwise straightforward and foolproof technique I have adopted. If anyone can advise I would be grateful; in the meantime I justify the omission on the basis that some things are better left than botched!

The photographs show the basal plate screwed to the building board. The next stage involves installing the various span-wise hardwood stiffeners, including a sturdy ash ‘main spar’ and lighter rear spar, both of which bolt to the wing centre section. Cutting the 5 mm ply rib sections on the scroll saw is a lengthy task, given that there are 23 of them per wing-half and that each one must be tailored to fit around the underlying structure. I use CAA glue exclusively for this stage: while costly, it has the advantage of strength plus rapidity of ‘grab’, and only the main spar is reinforced with wood screws.

I intend to model the flap of my Mk IX retracted, which simplifies things considerably. The rib sections bridge the two-ply plates, holding them together, and the balsa infill should ensure that everything stays flat and true. The situation at the wingtip is rather different: the precarious butt joint is spanned by the tapering extremity of the main spar, reinforced with a simple hardwood splice and plywood doubler, as shown in the photos. This will be further reinforced when it comes to building up the underside. Moreover, in preference to a balsa infill, I have used basswood – or something very like it – at the wing tip so as to provide a harder, resilient substrate in an area prone to damage.

By building the ailerons integral with the main planes, conformity is guaranteed. However, the Spitfire’s aileron poses its own problems, notably because its long downward-tapered leading edge terminates well forward of the top wing skin, which thereby forms an overlying shroud. This arrangement has to be anticipated at the outset by cutting and re-assembling the ply rib sections accordingly. Taken in conjunction with the step-down in thickness of the underlying plywood plates, this demands careful measuring and marking out. I do not propose to include working aileron hinges. All my models feature a simple arrangement of embedded brass or aluminium tubes, each containing a telescoping brass rod. As the photographs show, these are emplaced into slots in the wing plate and the structure is built up around them. The result is that the ailerons, while static, can be removed and replaced at will.

There is not much to say about the balsa ‘blocking’ process, since it has been described for the fuselage (October 12th 2013). What is noteworthy is the process of ‘roofing’ the wheel well and wheel strut channel voids. To create these spaces in the first place, five of the six ply sections that span this part of the inboard wing (the exception represents a built-up wing rib) have to be cut away, leaving a precarious 5 mm overarching strip at the top of each one. Of course, even this is monstrously over scale relative to the wing skin in the real aircraft, but the discrepancy will be undetectable to the eye in the completed model. Study of drawings and photographs of the interior of the wing between stations one and eight reveals the positions of all interior structure likely to be visible, and provision for it can be made and fitted at this stage. To ‘roof’ the wheel well I cut three rectangular panels from 0.5 mm sheet aluminium and installed these snugly between ribs five to eight. They are supported on the upper surfaces of the front and rear wing spars, and glued so as to conform to the top-wing curvature. Identical panels cut from 1 mm three-ply are inserted on top of the alloy and glued with contact adhesive, followed by a third and final layer of 1/8-in. balsa sheet. The result is a strong and resilient laminate. Viewed from the underside, the plywood edges of ribs six and seven remain visible, but will be hidden ultimately by two channel-section stiffeners. Even so, I cut a further skin panel from ten-thou litho plate and glued it between and over the two ribs, since this adds further strength, and the stiffeners will also hide the slight-down step either side. 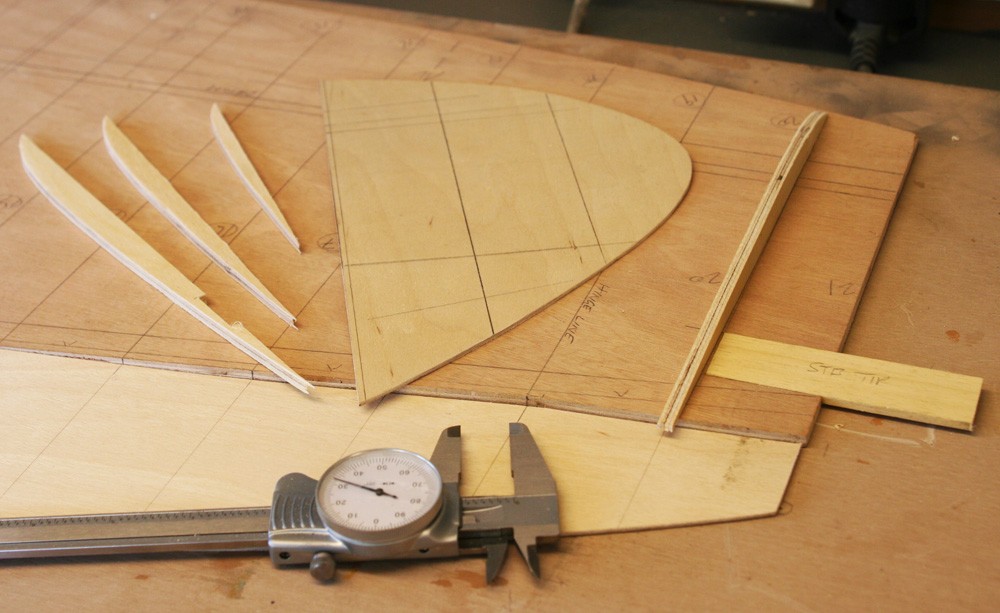 Some of the sheet plywood components for the starboard wing ready for assembly on the building board. 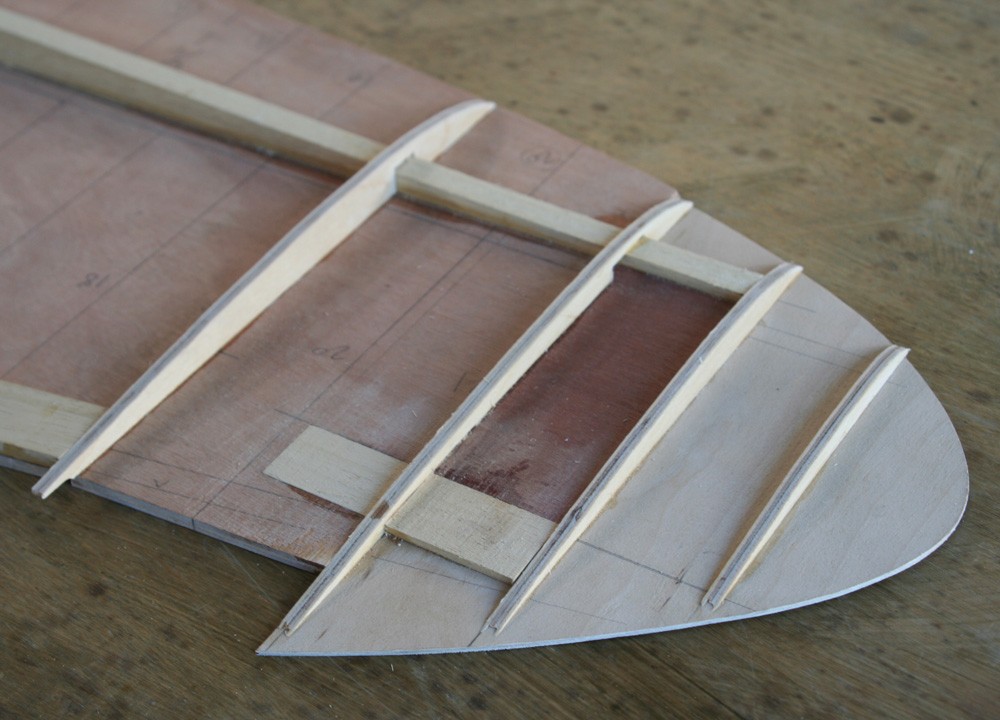 The 1.5 mm thick wing tip panel is butt jointed to the main basal plate and reinforced by a hardwood spar and splice and the darker plywood doubler. The first four rib sections have been glued into position. 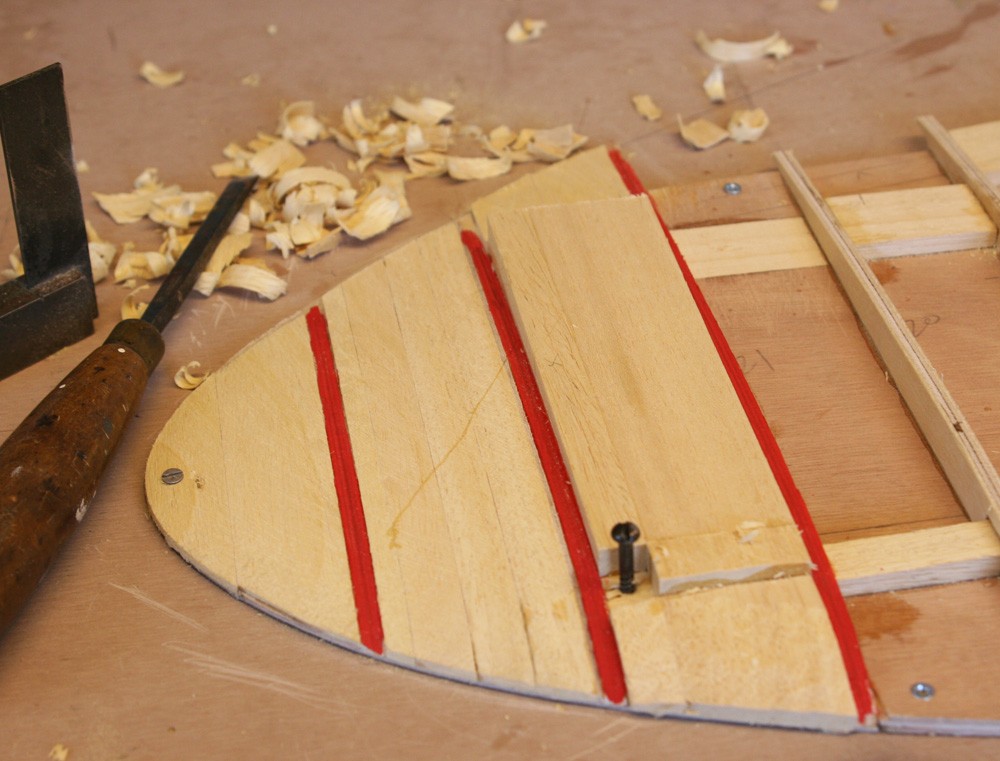 I used basswood to fill between the wing tip sections for added strength and resilience. The initial shaping is done with a small wood chisel. The red paint is there as an indicator to aid the final sanding down: when the paint starts to disappear you know it's time to stop! 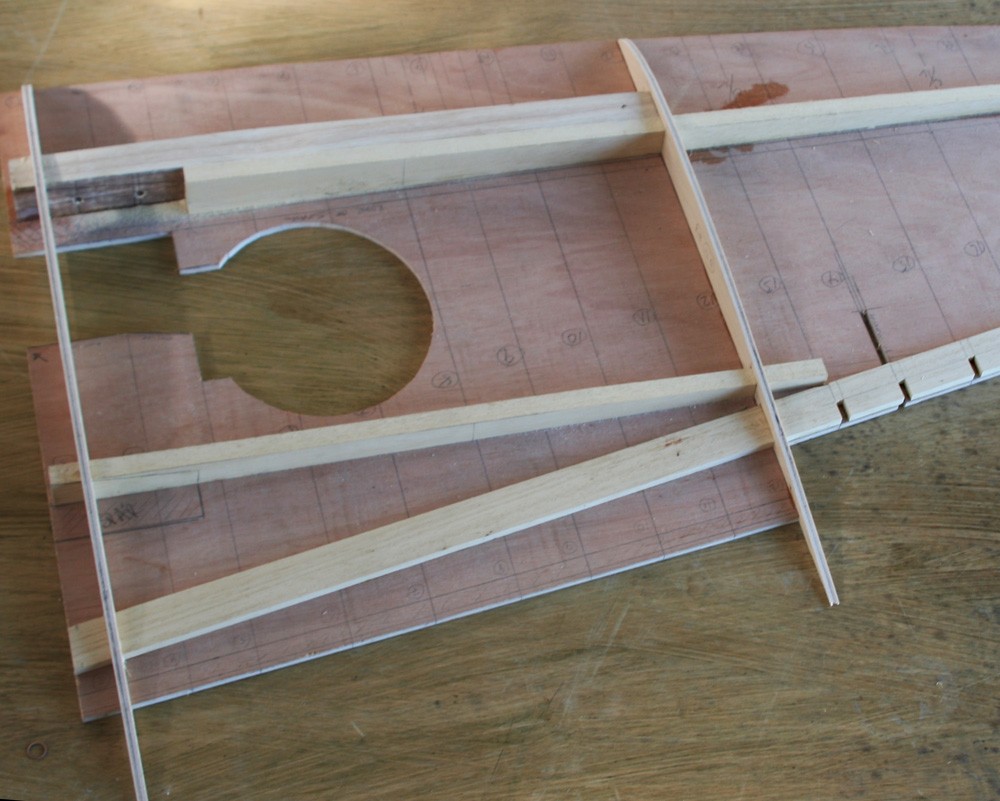 The arrangement of spars and stiffeners over the inboard half of the wing. 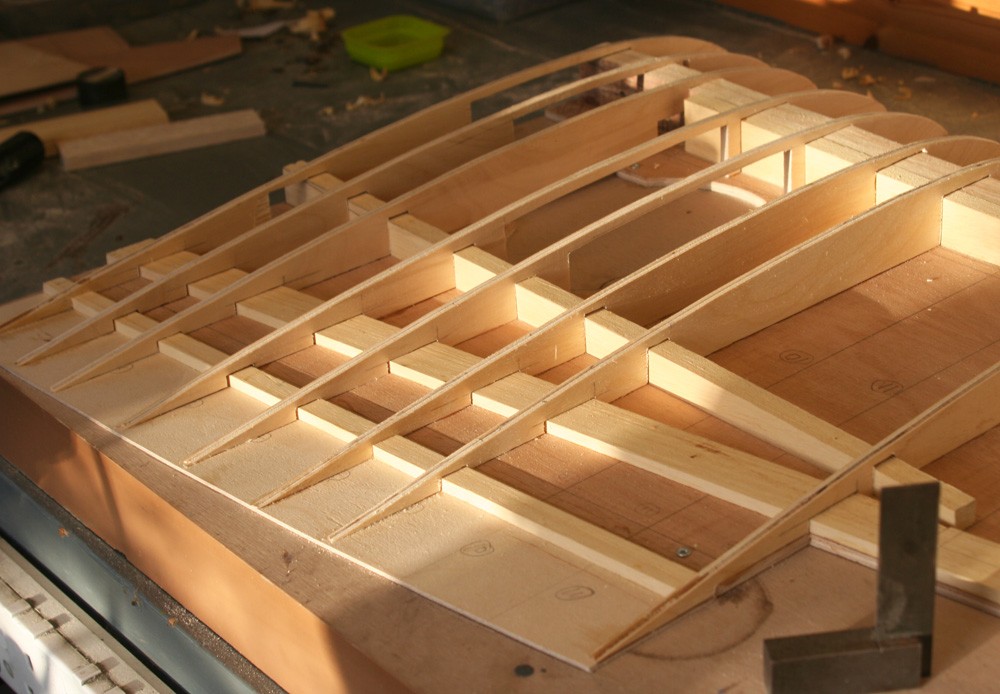 The flap plate has been screwed to the baseboard and the rib sections built up over it. 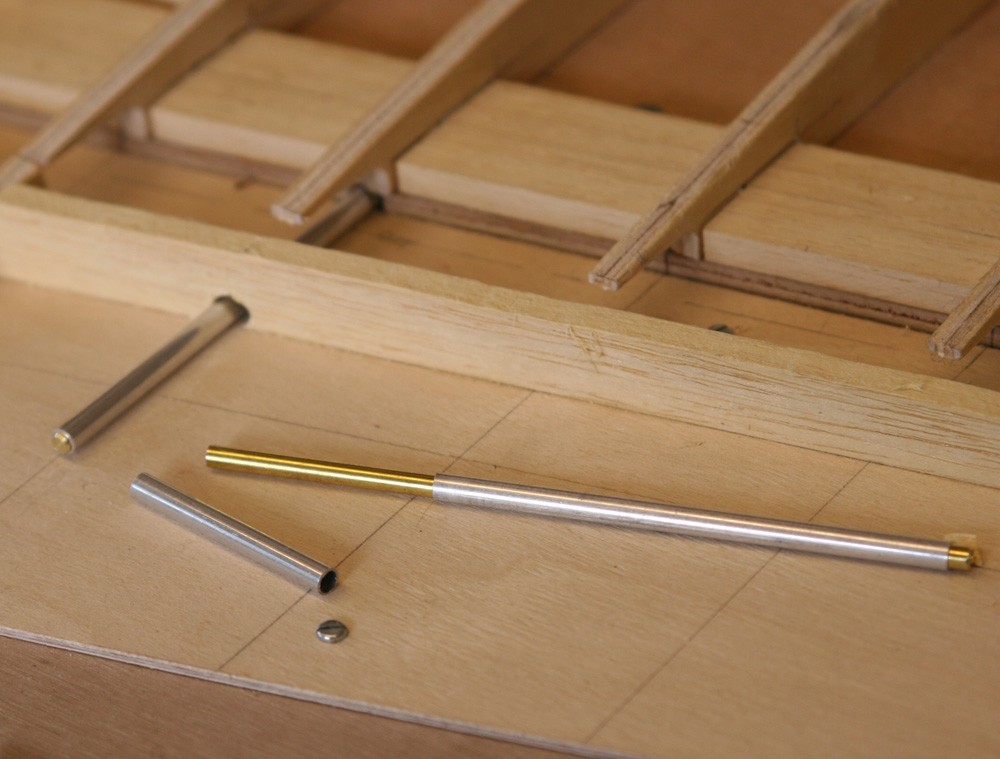 A similar procedure follows for the aileron, except that here the short ribs are cut from the main section and installed separately. Note the telescoping rod and tube arrangement and the basswood 'spar' to stiffen the aileron. 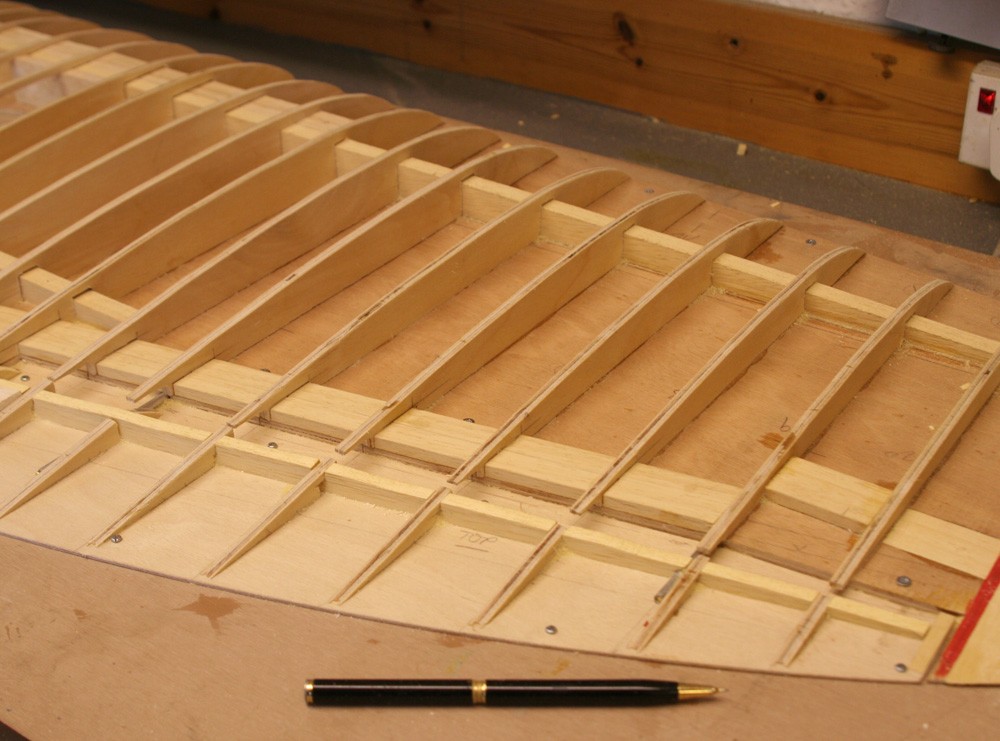 Work on the ribs is now complete. 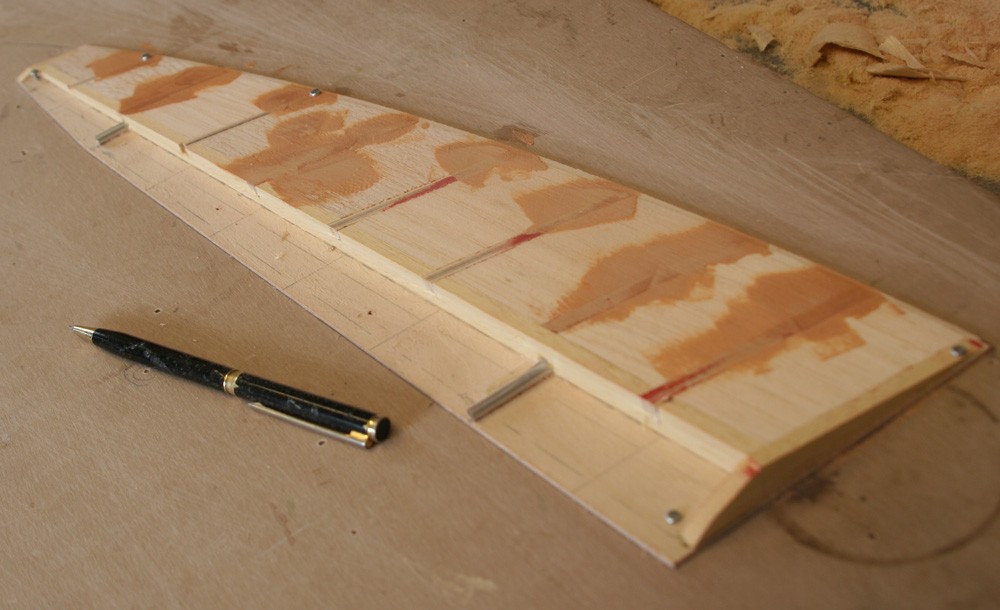 With the addition of the balsa infill the aileron half is now nearing completion, although the leading edge has still to be correctly contoured. 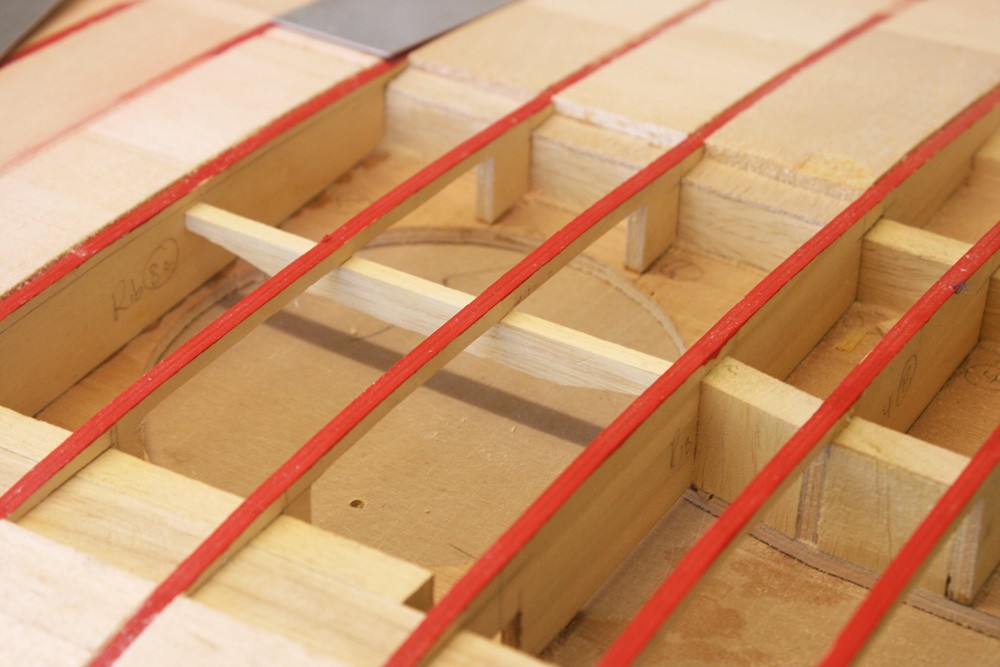 Work to roof over the wheel well begins. The temporary wooden support is wedged in place to ensure that the panels conform to the upper wing curvature. 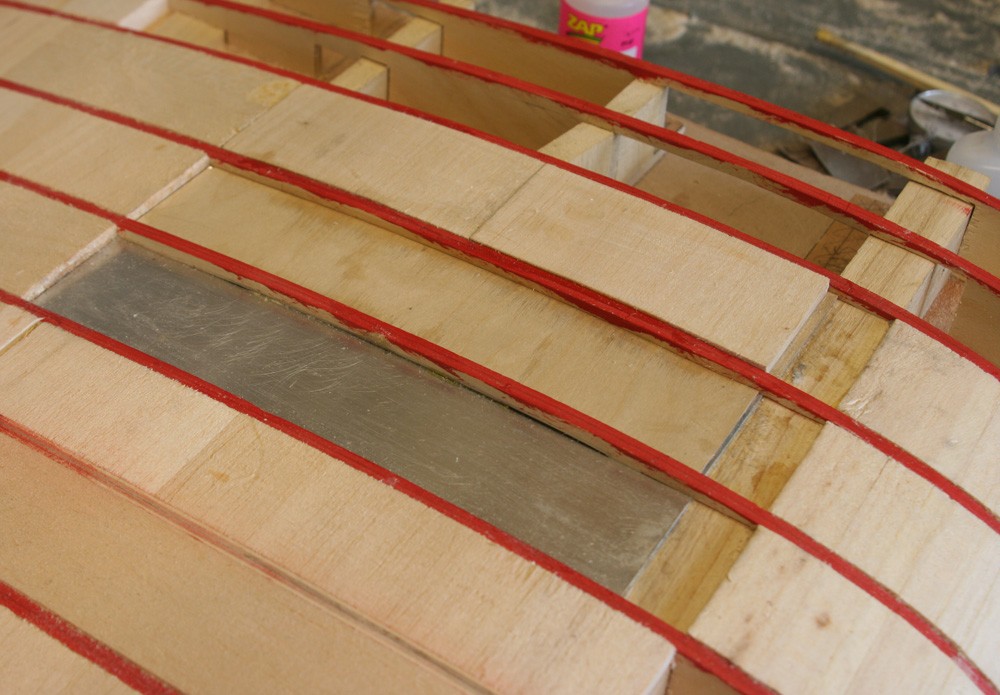 This shows the sequence of the top skin laminate: first aluminium, followed by ply and finally by balsa sheet. 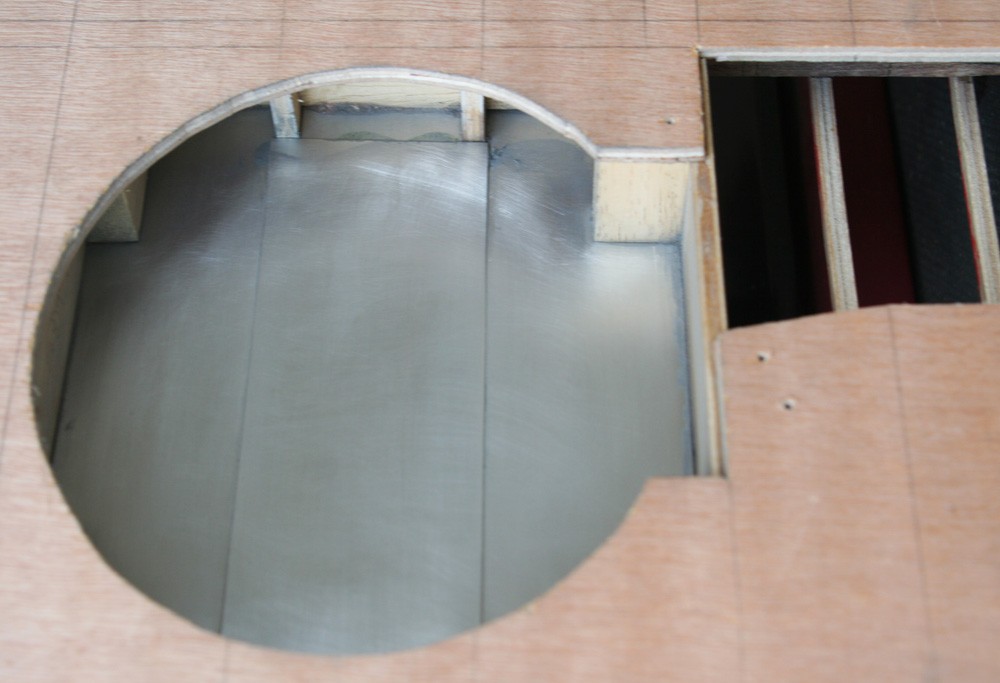 The work as viewed from the underside. 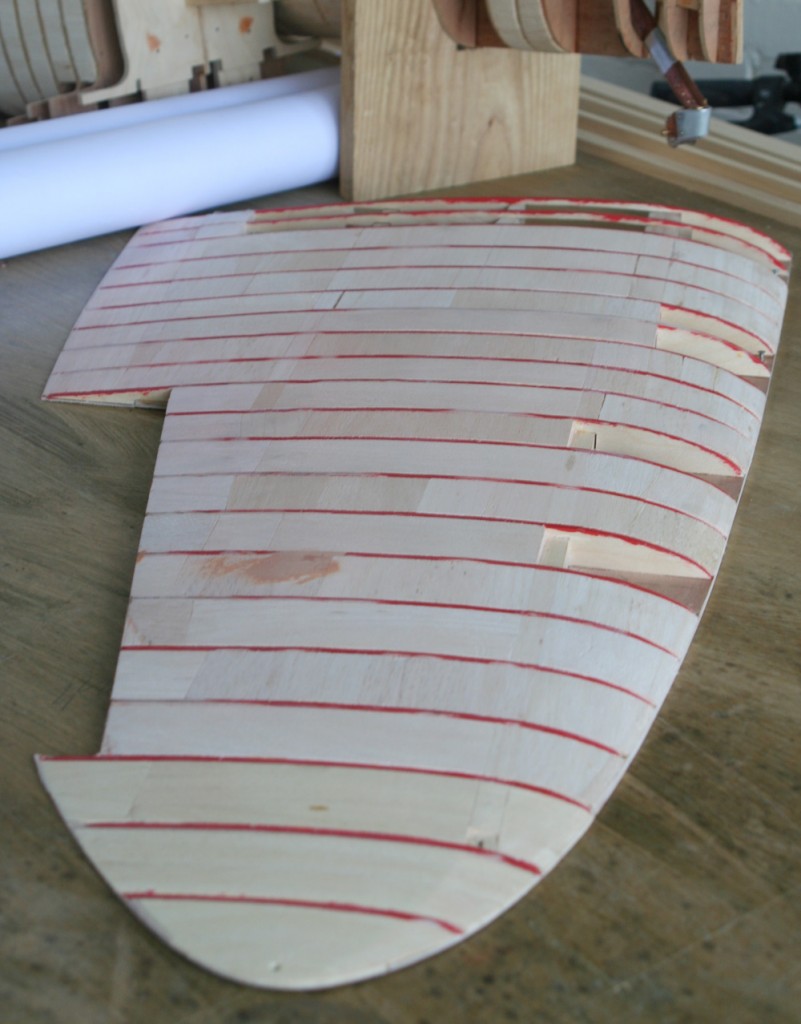 The basic wing half nears completion, although the surface preparation has still to be 'fine tuned'. The spaces in the leading edge are for the cannon and machine gun ports.