To my eye the long, sweeping wing root fairing is one of the loveliest characteristics of the Spitfire – a make-or-break feature for any model. By drafting the fairings integral with his fuselage sections, Paul Montforton had maximised the chances of getting it right. All I had to do, once fuselage and wing centre portion had been united, was to was fill the spaces between the laterally protruding plywood templates with blocks of soft balsa and cut and sand the three-dimensional shape, using the ply edges as a guide – a very simple job.

The difficulty arises aft of the wing’s trailing edge, since, while the cross section of the root fairing remains delineated by fuselage sections 11 and 15, there is nothing to define its contours in the fore-aft axis as it sweeps backwards and upwards from the wing root to fair gracefully into the fuselage sides. Clearly, some sort of fore-aft former linking the spaces between frames in plan view was necessary, yet how to achieve this? If I installed it piecemeal, the result would probably be a series of punctuated arcs rather than a continuous graceful curve. As so often, the solution came to me in bed in the early hours: I would make the former in one piece, slotted to fit over each of the frames, but with little tabs of excess material outboard of each slot to hold the entire piece together while the glue set, after which this excess could be carefully cut away.

I made the formers, one port, one starboard, from flexible 1mm ply laminated to 0.5mm aluminium sheet, a precaution that was not just for added strength and rigidity. I reasoned that the alloy would provide a harder, more durable edge to work to and that it would help in achieving the required set. Marking out was not easy, because of the geometry involved, but I was not too worried about the fit of the slots, the key issue was the outboard edge and that it ran true between the frames; all else would be hidden under the balsa infill.

The final carving and sanding to shape required an assortment of ad hoc sanding blocks and care, particularly where the fairing fines away aft into the fuselage sides, but otherwise the finishing of the topside was straightforward. Predictably, the underside proved more tricky due to the wing geometry: At the leading edge, the cross section of the under-wing and fuselage is conveniently flat; however, moving aft the increasingly more rounded belly skin converts progressively on either side to a deepening concave curvature at the wing roots. Since here I lacked the benefit of built-in internal templates as a guide, I cut cardboard external templates at fuselage stations 9 to 12 and spent a considerable time filling the wedge-shaped voids between the belly and wing roots with a mix of balsa scrap and successive applications of wood filler, until finally I had a gracefully undulating surface that looked right and that passed the ‘touch test’.

The pictures show the various stages. To say I am relieved at the outcome is an understatement. 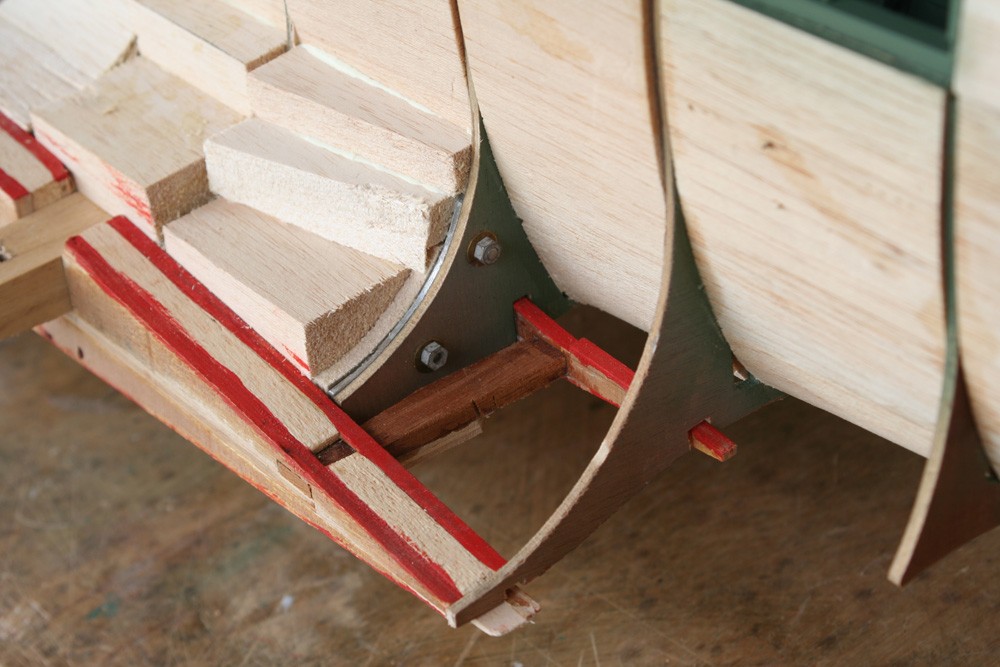 Much of the three-dimensional shape of the wing root fairing is delineated by extensions of the fuselage sections. The close fit with the trailing edge of wing sections 1 and 2 caused some relief. 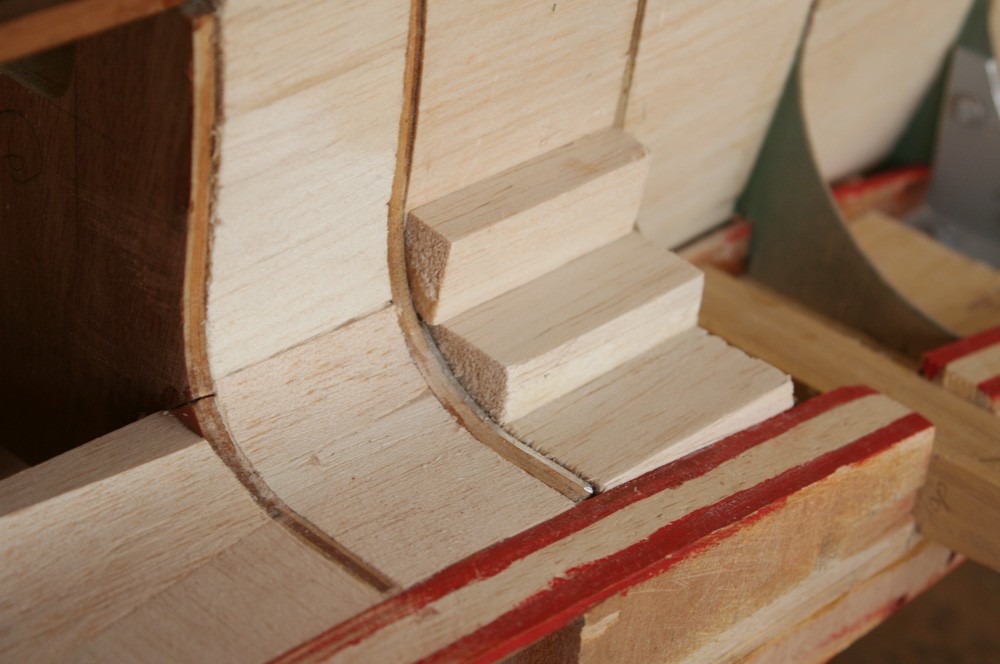 All that was needed was to fill the spaces in between with soft balsa and carve and sand to shape. 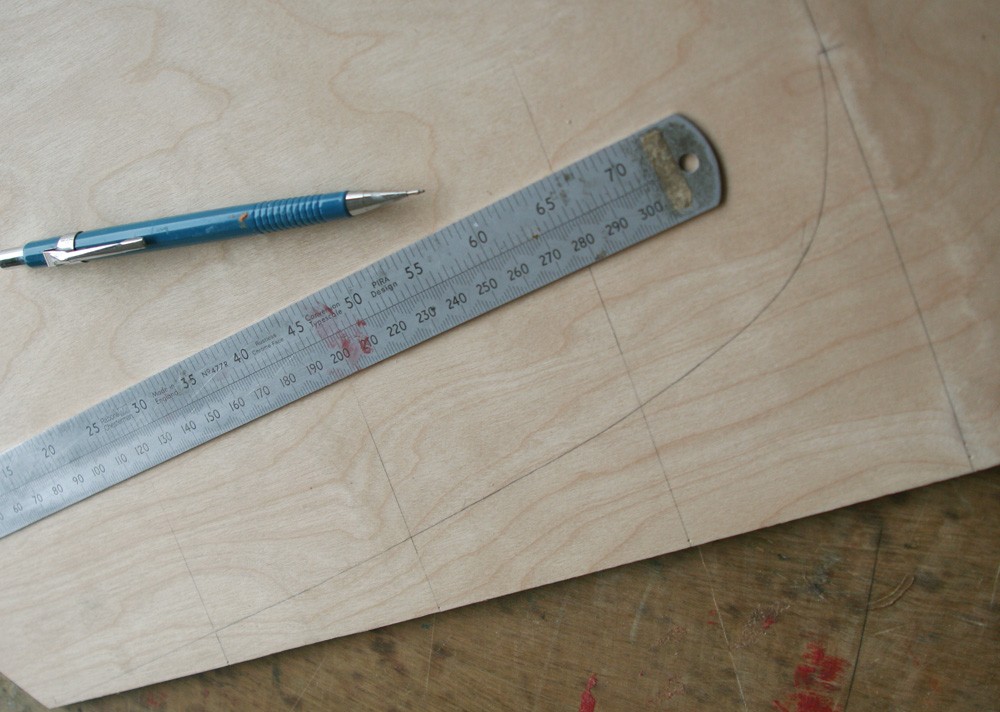 The plan view of the fairing aft of the trailing edge is transferred to 1mm ply. 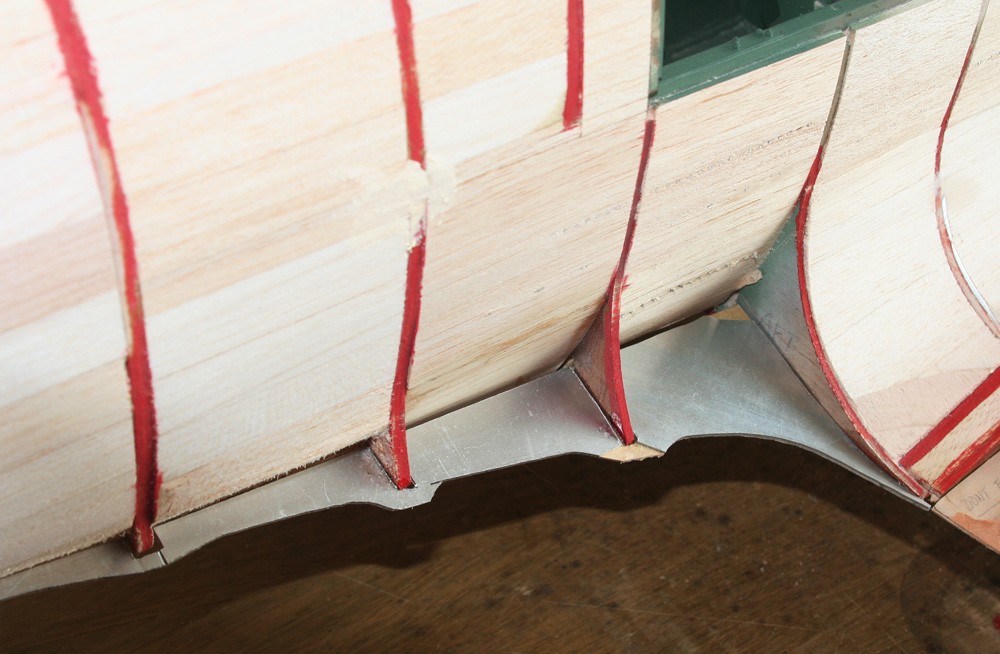 The ply, laminated to 0.5mm alloy sheet, is glued in position, leaving protruding tabs which are cleaned off later. This helps define the sweeping arc of the trailing edge. 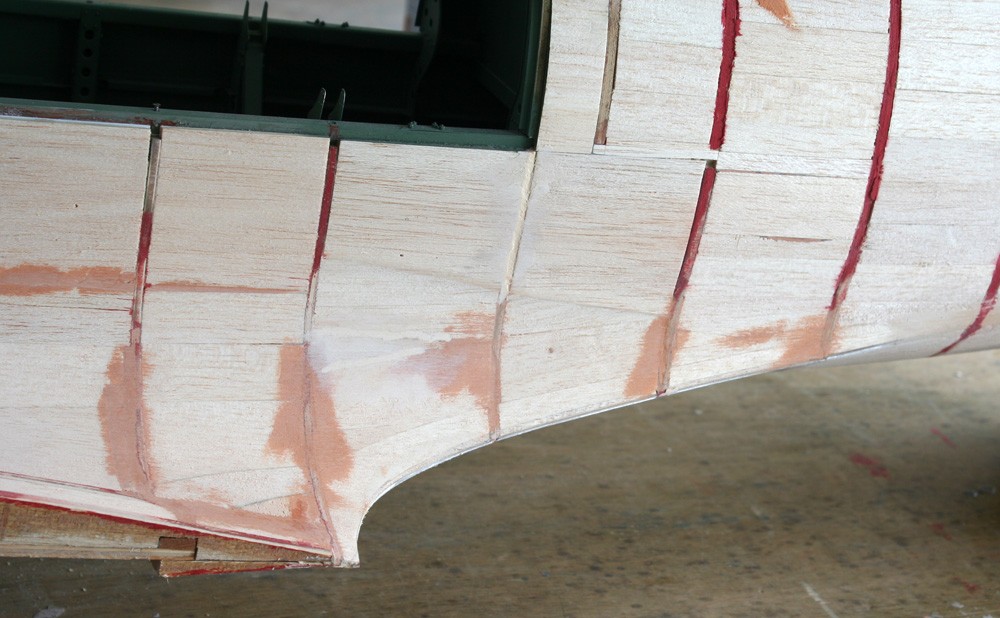 As previously, the gaps are filled with balsa and cut to shape. The relatively hard alluminium edge assists in this process. 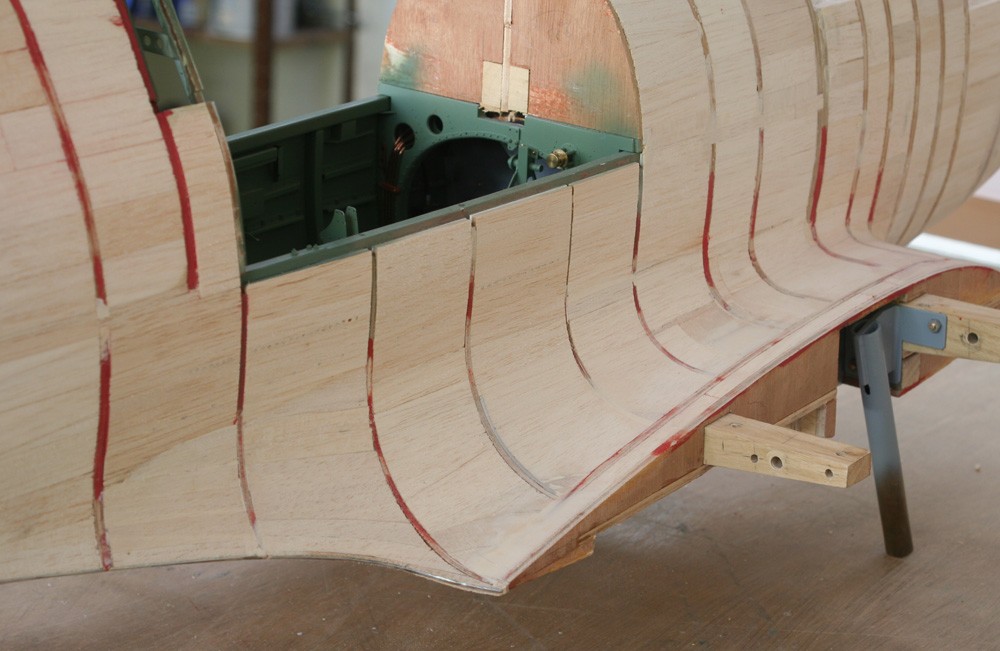 The elegant lines of the fairing show to good effect. 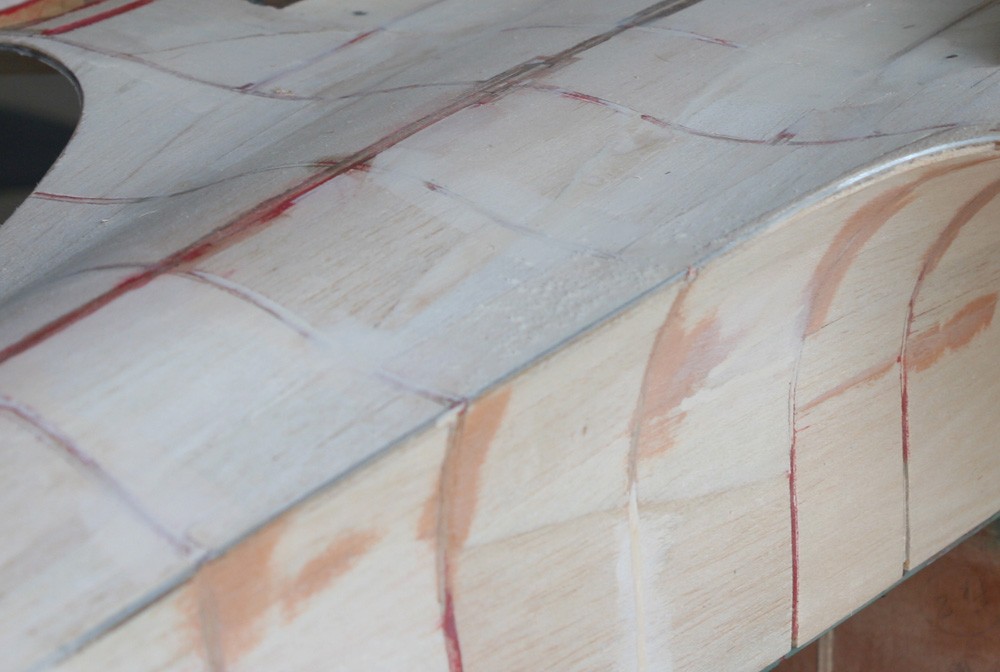 The subtle counter curvatures on the underside were more difficult to capture and relied heavily on multiple applications of filler, notably in the gaps between the fuselage sides and wing root.