With the nose section now complete, I turned to the Vokes air filter. It made sense to tackle this sooner rather than later, since the outcome was by no means guaranteed, and there is little point in investing countless hours in a model only to fall miserably at an insurmountable hurdle near the finish. In the full size Mk IX the Vokes fairing is an integral part of the lower cowl – a superbly smooth, elegant and unblemished piece of metalwork. I know my own skills and am pragmatist enough to accept that to build this of metal, or to metal skin such a sleek and finely tuned shape in combination with the large and already challenging cowling panel is a ‘bridge too far’.

So I set to weighing the alternatives: some kind of glass fibre lay-up, vac-formed styrene sheet, or a resin casting. All would make painting – in some form or another – of the finished piece mandatory, and therein lay the rub: how to reconcile this with my intention to leave the finished model in bare metal. The first two options I quickly dismissed for lack of experience and/or equipment; that left resin, which I had used for seemingly daunting tasks before. Paul Monforton’s drawings give clear sections and a profile for the elongated Vokes fairing, so I had the basis for a pattern, using my tried-and-tested plywood-balsa combination. However, in addition to the requirement that the finished casting should capture the streamlined contours of the original, there were additional considerations, not least that it should appear hollow, but primarily that it should fit snugly and seamlessly over the strongly convex underlying airframe – and this was my entry point.

As April drew to a close I cut the plan-view shape of the fairing (with allowance for curvature) from litho plate, which I annealed and taped accurately in position. With a little gentle massaging, the softened metal conformed readily to the underlying fuselage. Next I cut a profile from 3mm ply, marked on the section positions and glued it in place, followed by the seven cross sections themselves and terminating in a tightly packed plywood sub-series that captures both the taper and the oval shape of the air duct opening. That was the easy part, and I quickly produced a three-dimensional framework ready for balsa infill.

Now a significant complication: study of the full-sized assembly shows a seam line that lies well outboard of the point where the body of the Volks fairing propper bells out meet the enclosing cowl panel. Clearly this fining out would be totally impractical to achieve using resin. The only option was to cut a separate ‘collar’ from 0.5 mm alloy sheet and to trust that, with the help of superglue and automotive filler, it and the resin casting could be invisibly joined when the time came.

Meanwhile, I prepared my finished pattern for action, using filler, sanding sealer and repeated coats of automotive spray primer, but with the intention leaving any final refinement and polishing of the piece to the more resilient and stable resin stage. I was and still am chuffed with my ruse for turning a pattern with no redundant side or face into a casting using my favoured one-piece moulding method. As the photos show, I simply made the casting in two pieces using two separate moulds taken from the front and back ends respectively. This had the added advantage of aiding the hollowing out process, which I confined to the front end and achieved with the help of my bench-top milling machine an a half-inch end cutter (there is a lot of material to remove!).

By the time the two castings had been faced to create abutting surfaces (working to a fine line pre-scribed on the pattern), the fit was good, and I was able to unite the halves in-situ using a copious application of thick superglue. The seam line and any residual blemishes and imperfections were quickly rectified with wet and dry paper, filler and spray primer, and, with the sole exception of the constricted contours around the top of the air scoop opening, surprisingly little overall refinement or cleaning up was necessary; what’s more, the finished piece fitted the model as well as I could have hoped. So my fears that I might be facing an insuperable hurdle have proved baseless; but I am not out of the wood yet… there is still the final fitting of that worrisome flange, and that can’t happen until I tackle the cowl panels as part of the alloy skinning stage, which as yet is a remote prospect. 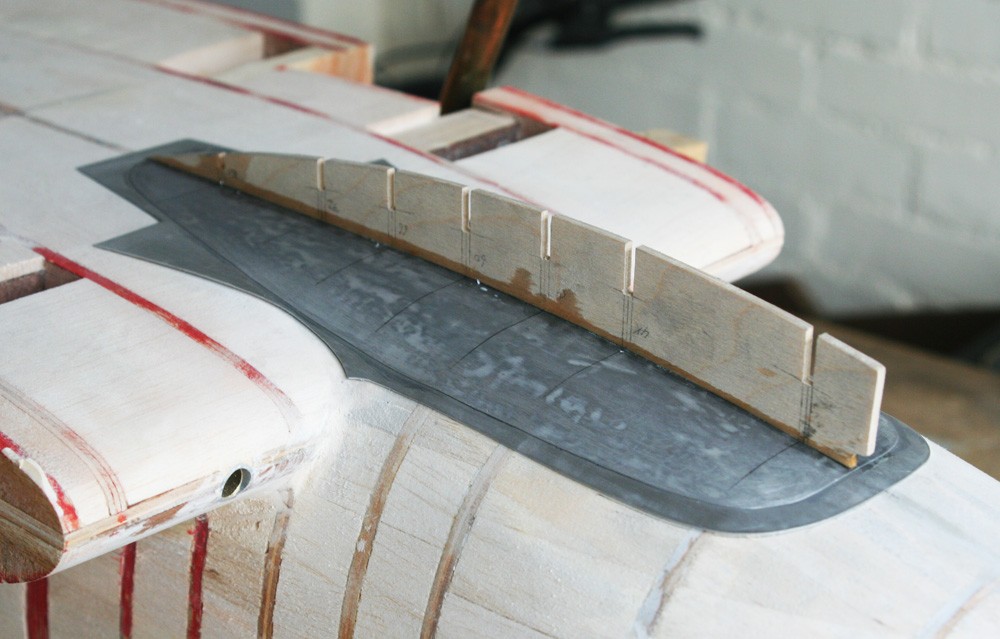 Side and plan views of the Vokes air filter fairing are cut from plywood and litho plate respectively. The latter is annealed and worked to conform tightly to the shape of the underlying fuselage. Note the addition of the wide flange cut from 0.5mm aluminium sheet. While this will become integral with the fairing on final assembly, it is made separately since its delicate edge would be impossible to capture and preserve in the casting process. 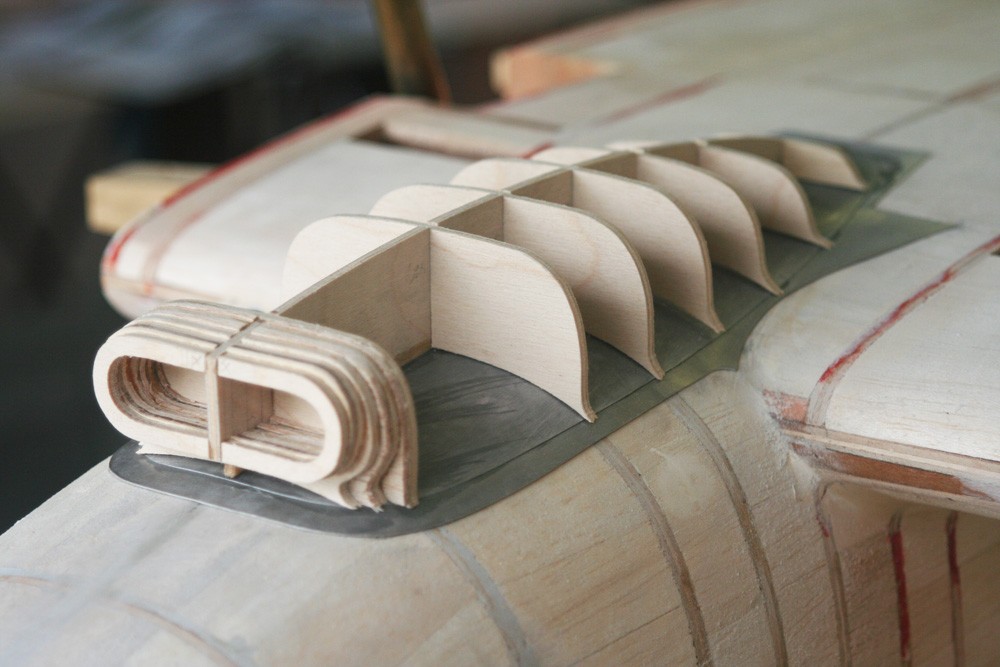 The full three-dimensional shape, including the oval air duct opening, is developed by addition of plywood cross sections taken from the drawings. 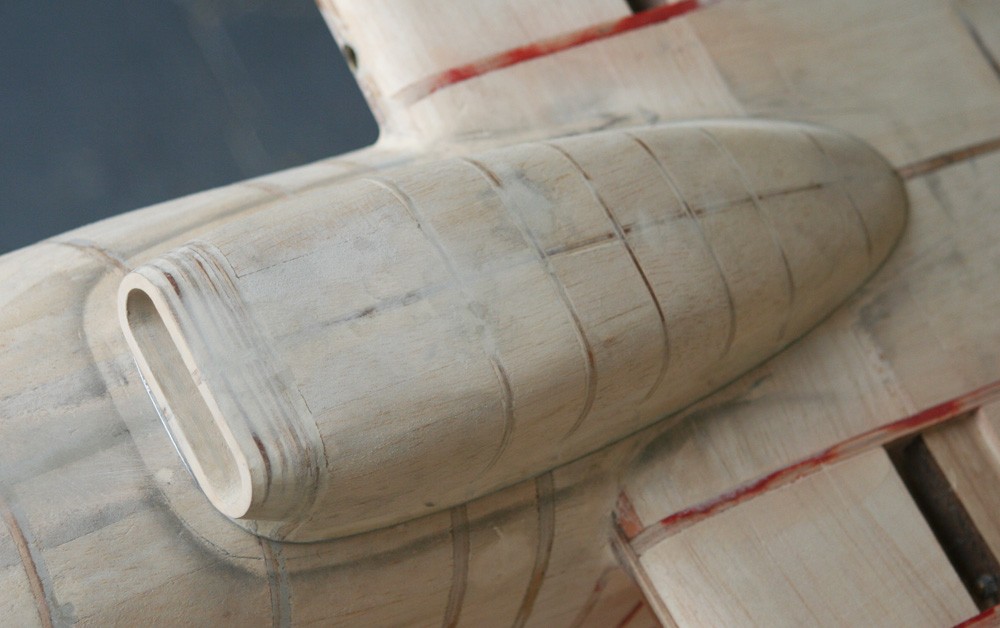 By now the balsa fill has been cut and sanded to shape, capturing the bell-shape curve where it fairs into the belly contours. 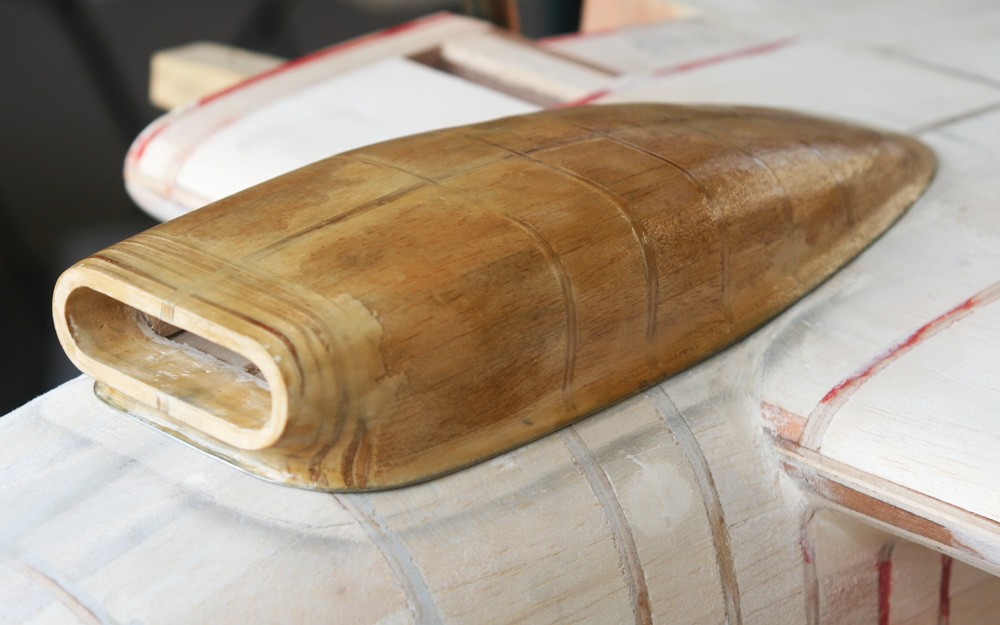 A coat of sanding sealer will shortly be followed by several coats of grey primer in preparation for mould-making.The air duct opening will be blanked off to a depth of 1/8-in. or so to aid in the casting process. 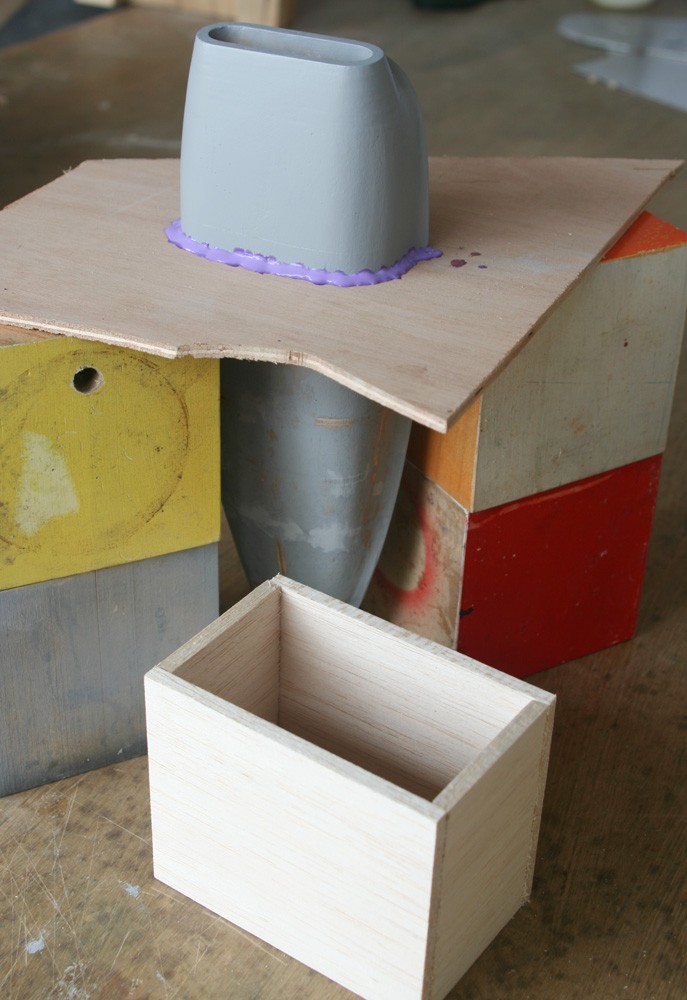 The pattern is partitioned in preparation for pouring a mould for its forward half. The make-shift balsa wood container is placed on top of the plywood and filled with rubber so as to cover the entire forward half of the pattern. When the rubber has cured, the pattern is removed and the mould inverted so that resin can be poured into into the opening left on its underside. 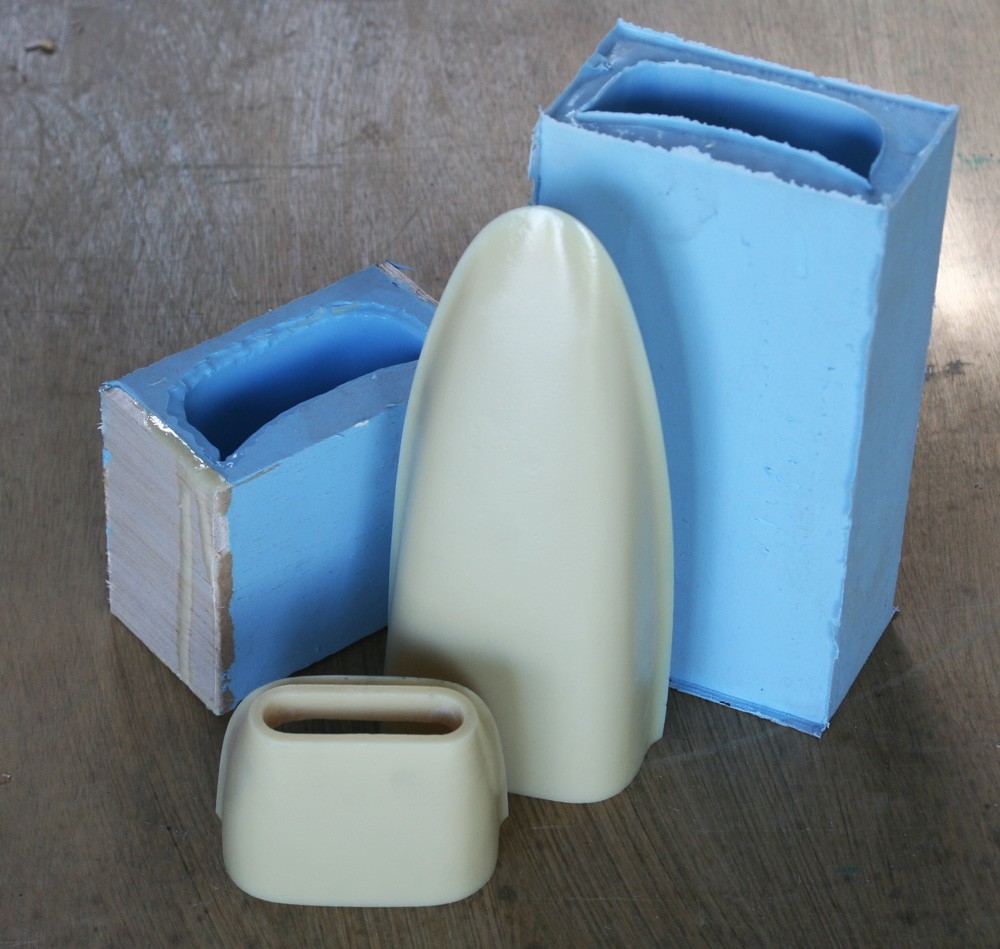 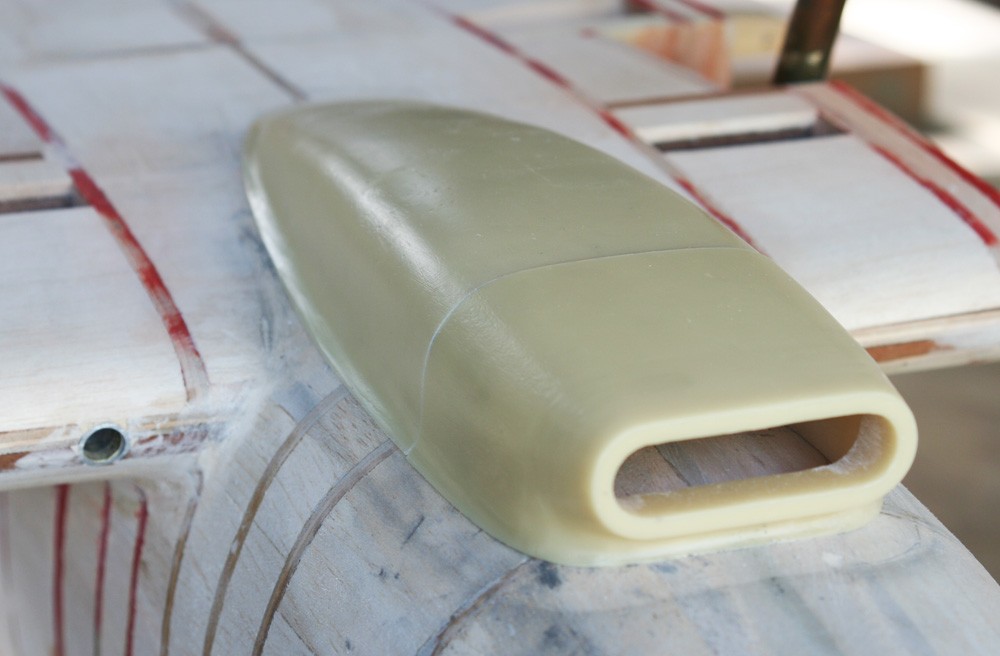 The two parts of the casting have been faced and glued together in situ. Note that the air duct opening has been holloed out, although there is still some refining and detail to add to its oval leading edge. 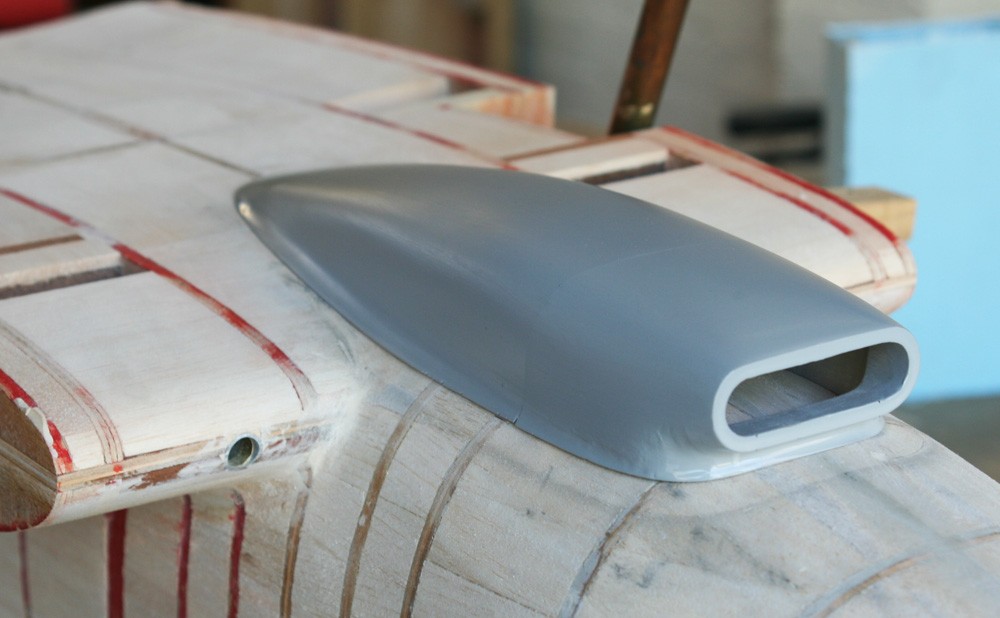 After a primer coat the join is almost invisible. Further fine tuning should take care of that and any remaining minor flaws.