Also located on the starboard lower sidewall, and immediately adjacent to the de-icing array described previously, are the emergency undercarriage CO2 bottle and hand lever and a brass tap for opening and closing the pilot’s oxygen supply.

In the Mk IX the oxygen bottles and economiser are located well aft in the fuselage, so, apart from a single pipe run, the control cock represents the oxygen system’s only visible presence. I fabricated the tap in much the same manner as the de-icing pressurising pump, from turned and milled brass hexagon soldered onto a sheet brass base. I cut the knurled wheel from the shaft of an old jeweller’s screwdriver, a shortcut I have used several times before!

In installing the control cock I discovered that I had omitted the square patch that reinforces the fuselage skin locally, and this resulted in time wasted in retrospectively cutting, drilling, and riveting the missing part in place.

The emergency undercarriage lowering system is rather more involved. I turned the CO2 cylinder from solid aluminium bar, starting at the neck end and then – with the piece reversed in the chuck – forming the domed end with a makeshift lathe tool cut from mild steel plate.

The cradle I made from sheet styrene and its two straps from aluminium shim, and set this aside in order to concentrate on the gas delivery assembly. Despite its diminutive size, my version is made from no fewer than six separate parts, each one machined as snug push fit into its neighbour. For jobs like this, where strength is not a major issue, I use cyanoacrylate glue for metal-to-metal bonding, and it has not let me down yet!

The push lever is cut from 0.5mm aluminium with the handle built up either side with styrene sheet, and, as can be seen in the picture, I added the little alloy shackle that retains a thin copper safety wire (not yet fitted) to prevent inadvertent activation.

Once painted and mounted in its cradle with the straps screwed down, the entire assembly could be installed permanently onto the cockpit wall where it abuts the front of frame 10. A single outlet line, which runs to a shuttle valve, was the only plumbing needed, although I had a nasty moment when I realised while attaching the copper pipe that I had set the angle of the outlet union incorrectly so that it fouled the mainframe. Fortunately I was able to adjust this without damage. 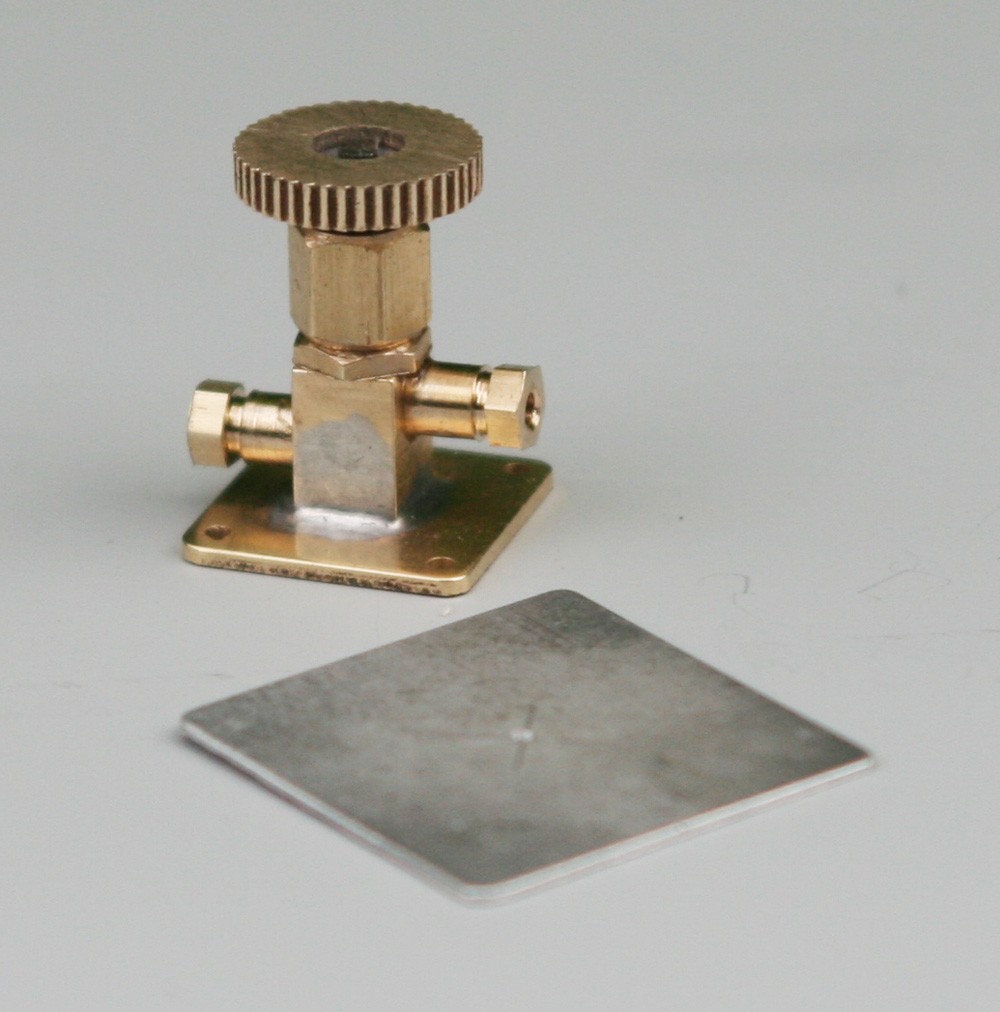 The oxygen control cock complete except for the lock nut in the centre of the knurled tap. Also shown is the alloy reinforcing plate mentioned in the text. 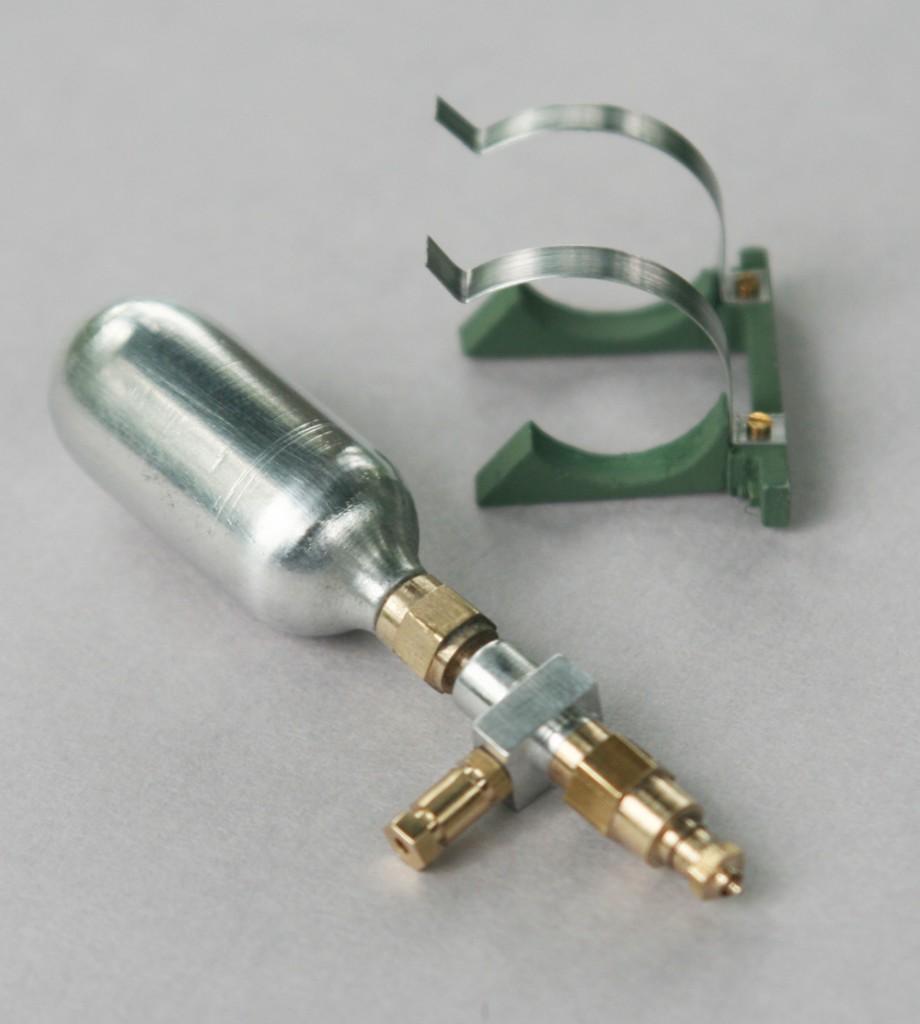 The main elements of the emergency chassis drop-down kit. 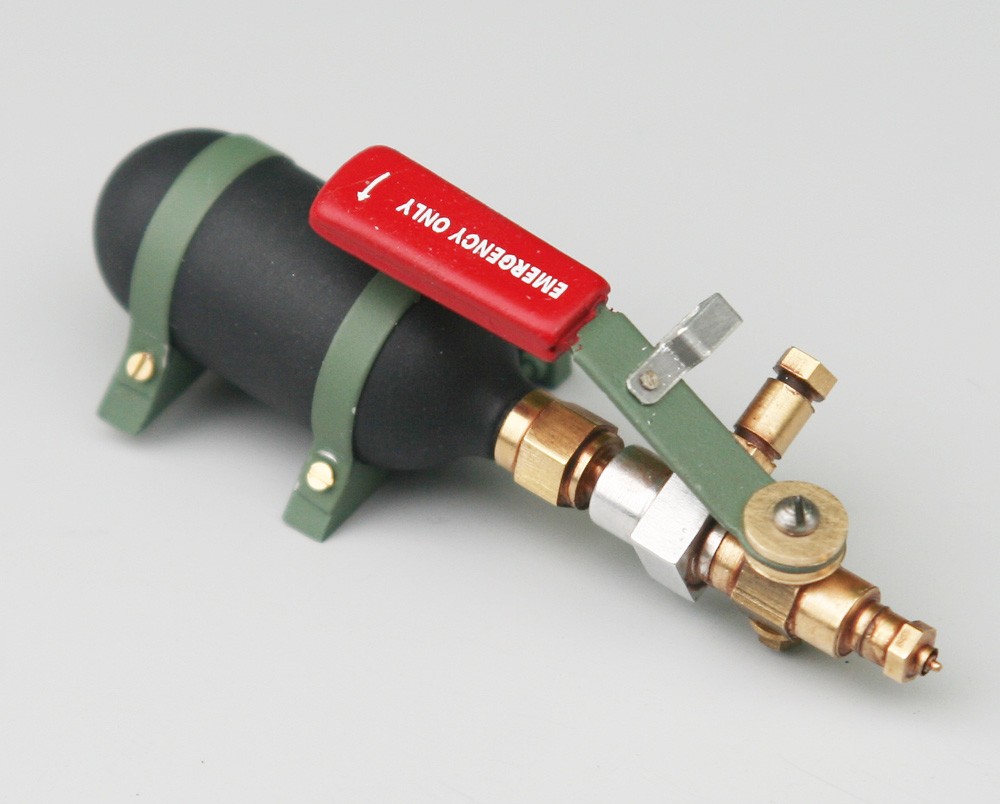 The assembly after painting and with the hand lever installed. I use a thin wash of burnt sienna and black artists' oil paint on all bare metal parts so as to enhance detail and give a subtle 'used' appreance. 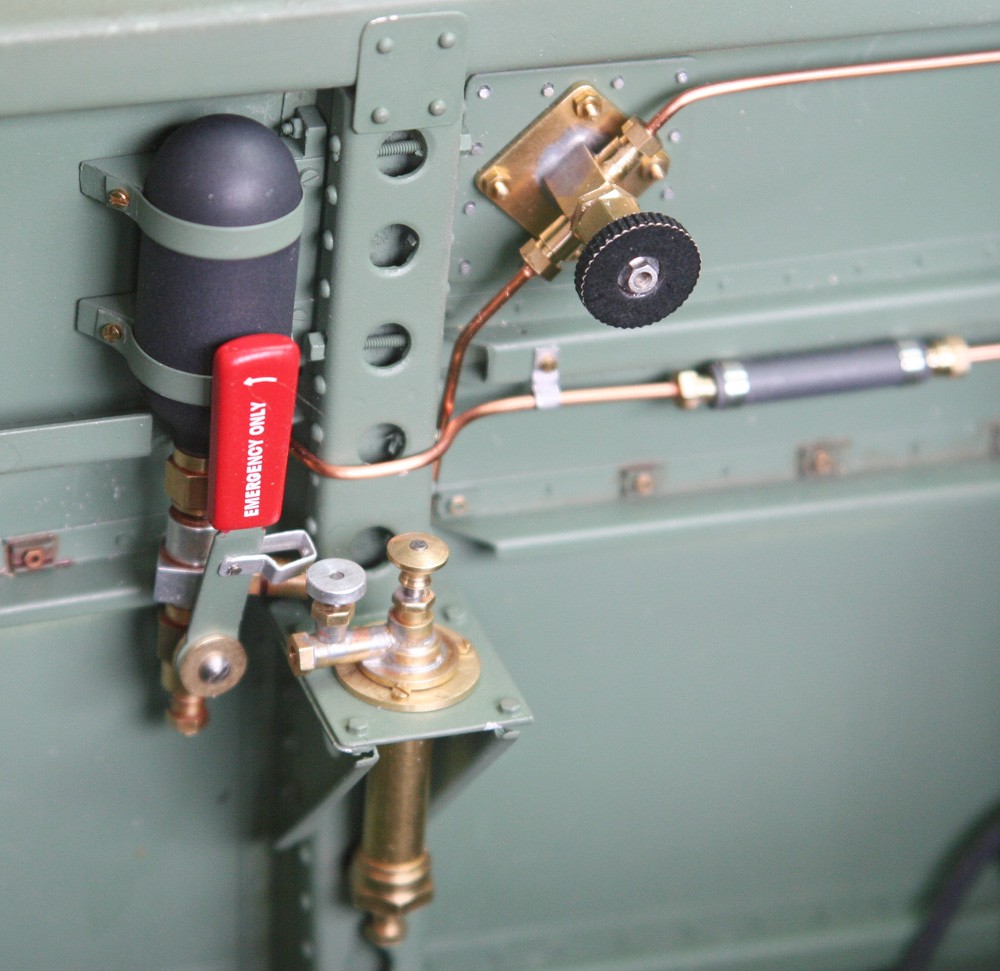 The oxygen control cock (with its tap now painted black) is installed and plumbed in, together with the CO2 assembly. The windscreen de-icing pressurising pump was described in the previous blog.