The methods I use to make much of the cockpit detail in my large-scale models draw heavily on techniques picked up over years of ‘super detailing’ or otherwise adapting plastic model kits, and this is immediately evident in the combination of materials used. The IFF (Identification Friend or Foe) switch assembly, which completes the cluster on the starboard lower cockpit wall, is a case in point.

I began with the aluminium tray, using a combination of folded litho plate and styrene sheet to simplify construction. Obviously, this is only possible because of the angle at which the finished detail is seen: From the top the tray after painting looks like folded aluminium; from the underside it doesn’t. But by using the two materials in combination I saved myself work.

To further the eclectic mix I used an old plastic knitting needle to turn the two self-destruct pushbuttons and milled a scrap of waste two-part resin for the dice-like bodies of the stacked switch boxes. The pushbutton safety cover is litho plate and its hinge is made from 1mm diameter styrene rod, scored at close intervals around its circumference to represent the links.

All very straightforward so far, but the switch faces present a thornier problem. Had there been just one or two, I would have made them up from styrene sheet, but the cockpit contains numerous switches, and all of them of a standard pattern. This alone pointed me to resin casting. So I made a master for the switch faces from two tiny rectangles of styrene, with the topmost smaller one pierced dead centre for an oval opening for the switch itself. When the cement was dry I added six dimples to mark the positions of the screws.

To make a master for the switch I simply cut a wedge shape from sheet styrene and an even smaller disc and cemented the two together. My pictures show the finished patterns mounted on scrap in preparation for mould making.

I anticipated trouble when casting such tiny components, and I got it. The main problem was air bubbles, and there were also some breakages of the fragile switch when de-moulding. I ameliorated the bubble issue by stirring and poking about in the corners of the mould with a fine gauge piano wire probe while the resin was still fluid. Nonetheless, I’m still getting about a one in three success rate, so it’s going to take some time to generate the full complement of switches!

The finishing of the switches needs little elaboration, except to say that further attrition was encountered through ‘breakouts’ while drilling the fragile corners to take the screws, which are the last thing to be applied after painting. It is perhaps worth mentioning that in photographs of the originals that I have studied, the switches appear to be a distinctly different colour from the switch plates, more of a brown-black and sometimes almost tawny brown. That is how I sprayed mine, and it certainly helps to emphasise the detail. 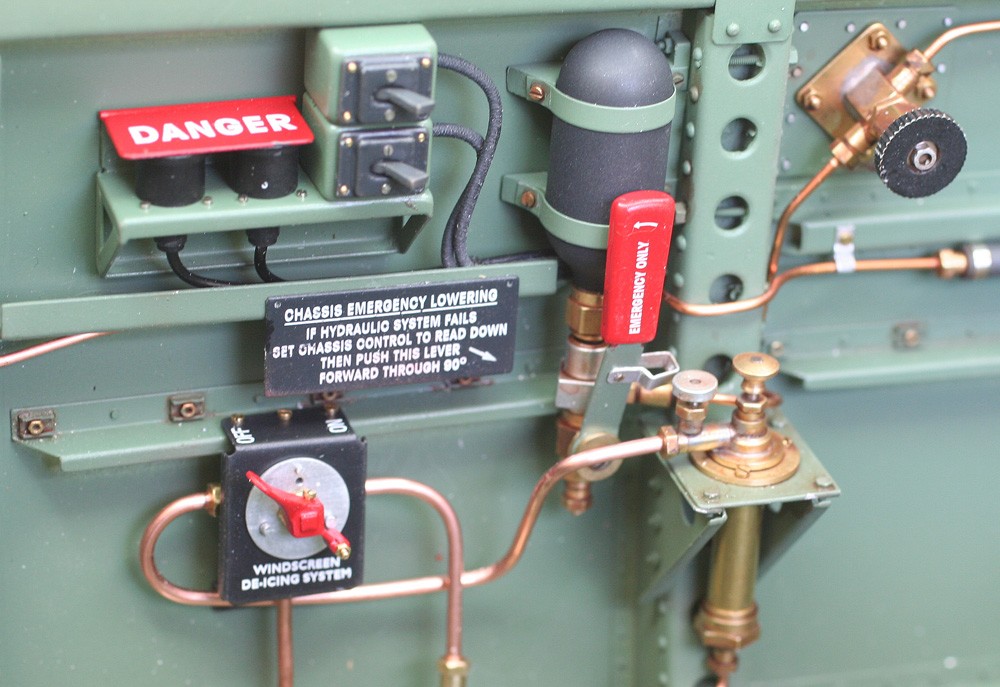 The completed and temporarily installed IFF switch box assembly. Together with the de-icing controls and CO2 bottle, this part of the cockpit is beginning to look complete. Note the electrical wiring running from the IFF switches and push-buttons. The braided cable on the right is actually 'knicker eleastic' painted grey... It sounds unlikely but it works!! 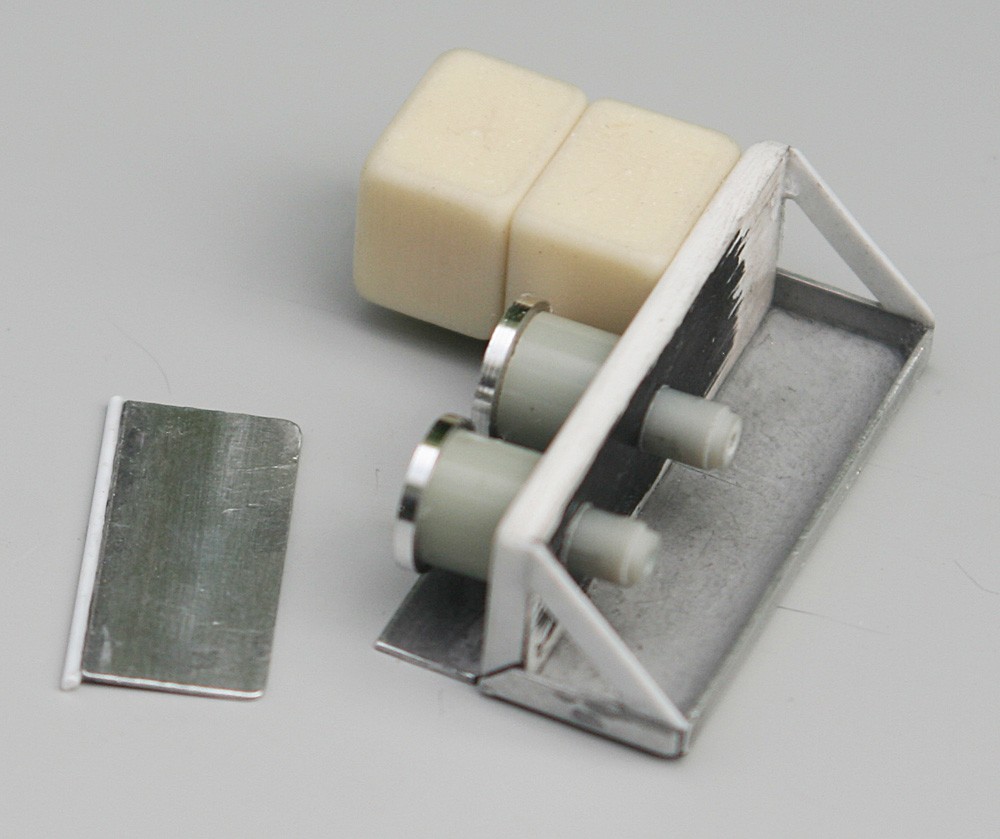 The several components of the IFF kit prior to painting. Note how the support tray is made from a combination of folded litho plate and styrene. 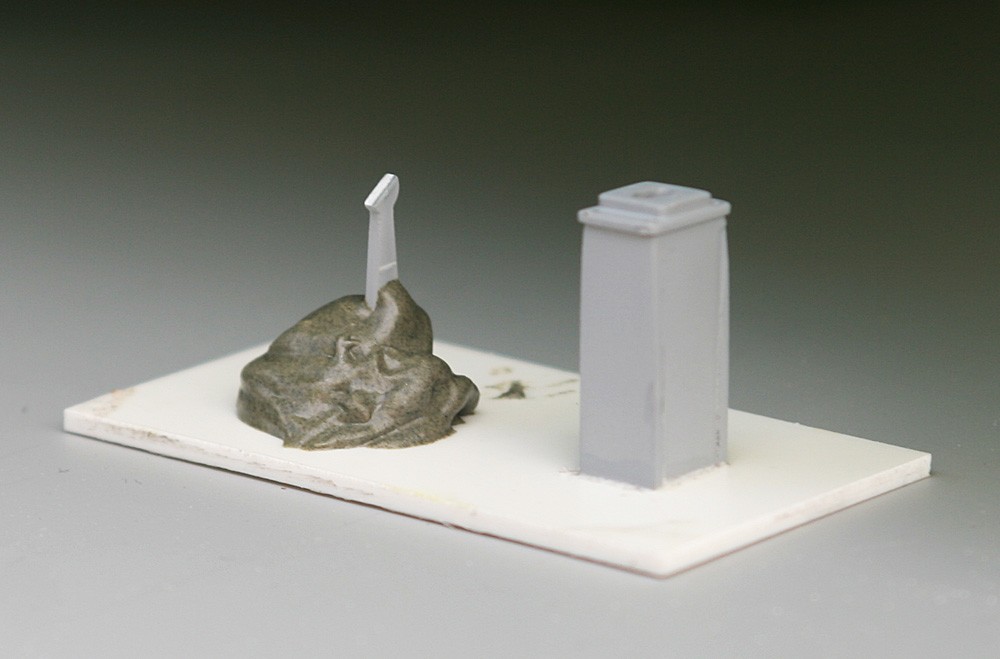 My patterns for casting the two-way switches. 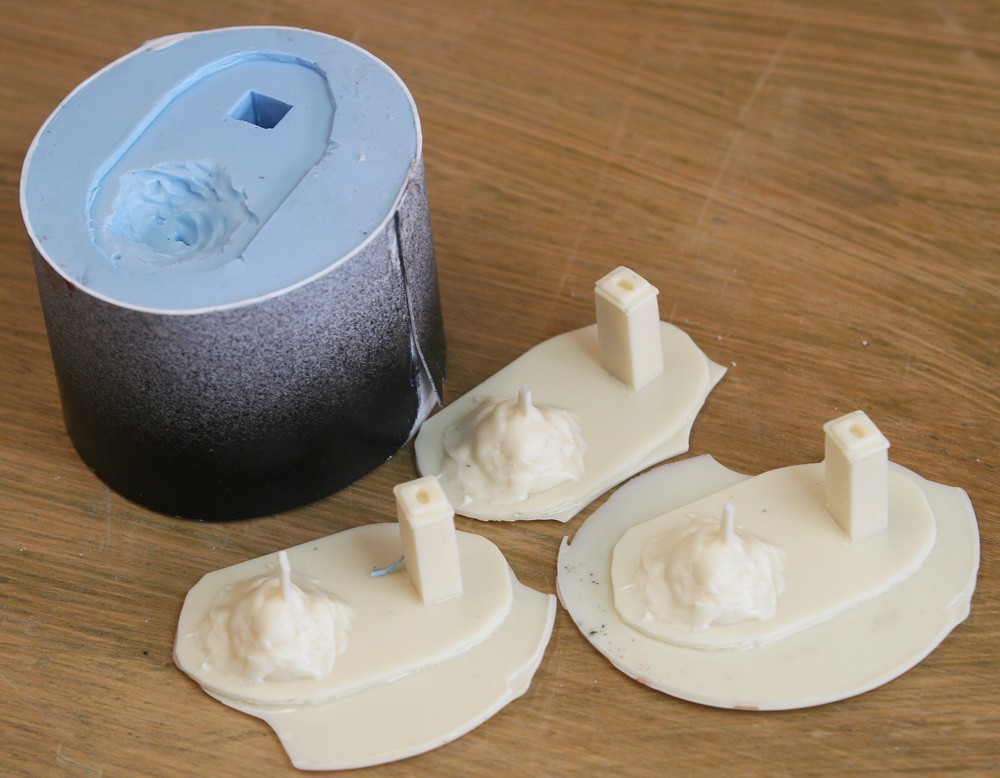 The silicone rubber mould turned out fine, but such tiny castings are prone to ruin caused by trapped air.