I mentioned the Spitfire’s drop tank jettison equipment in my entry of July 9, when I fitted some obscure components of its control mechanism into the belly of the fuselage. By contrast, the controls themselves are highly visible, being mounted onto the starboard side of the beam integral with frame 9.

At first glance, the arrangement is by no means straightforward, and my trepidation when starting was mitigated only by some good photographs, including one downloaded from the matchless Avspecs website (see links) of all the disassembled parts. This image alone, taken almost perfectly square on, is so good that I was able to scale it on my laptop and print it out for use in place of the component drawings.

I began with the big, loop-like tank release handle. But before cutting its shape from aluminium I annealed the piece and created the offset assumed by handle itself. As a further complication, the handle is significantly thicker than the body of the piece, so to represent this I glued on a layer of styrene sheet locally prior to cutting out the shape. I also added styrene bushes at the handle’s pivot point and in the lower corner where a cable and turnbuckle are attached. As my pictures show, the end result, after spraying, is a plausible copy of an alloy casting.

The mounting quadrant consists of two flanged plates, each a mirror image of the other separated by cylindrical spacers and bolts. They were relatively easy to make once I had cut and drilled a tiny brass former around which to bend the flanges. Also by matching the depth of the former to the flange depth it is easy to file the latter evenly and precisely, using the in-situ former as a guide. In the real thing the assembled quadrant is bolted to frame 9 by means of a ‘foot’ formed in the piece by some clever folding of the sheet metal, but I simplified this by folding a separate channel-shaped part from litho plate and gluing it in. My rather blurry photograph, I hope, makes this clear.

I made the fuel cock lever using brass parts and including the turned disc onto which the handle part is soldered. The knob at the top is made from two small discs punched from styrene and glued either side, with the gap between them made good with filler. Finally, I added the little information plate made from a scrap of litho plate and the shackle and extended turnbuckle that form part of the cable linkage.

In the full-sized aircraft a steel cable runs from the turnbuckle to the lever on the fuselage floor (see July 9) via a pulley on the bottom of frame 9. When I made and installed the mainframe I omitted this pulley, but it would be invisible anyway behind the bulky cross-shaft that operates the radiator doors, and that is precisely where the long turnbuckle ends. So while the cable linkage is not complete, it appears as if it is complete, which is more by luck than judgement. 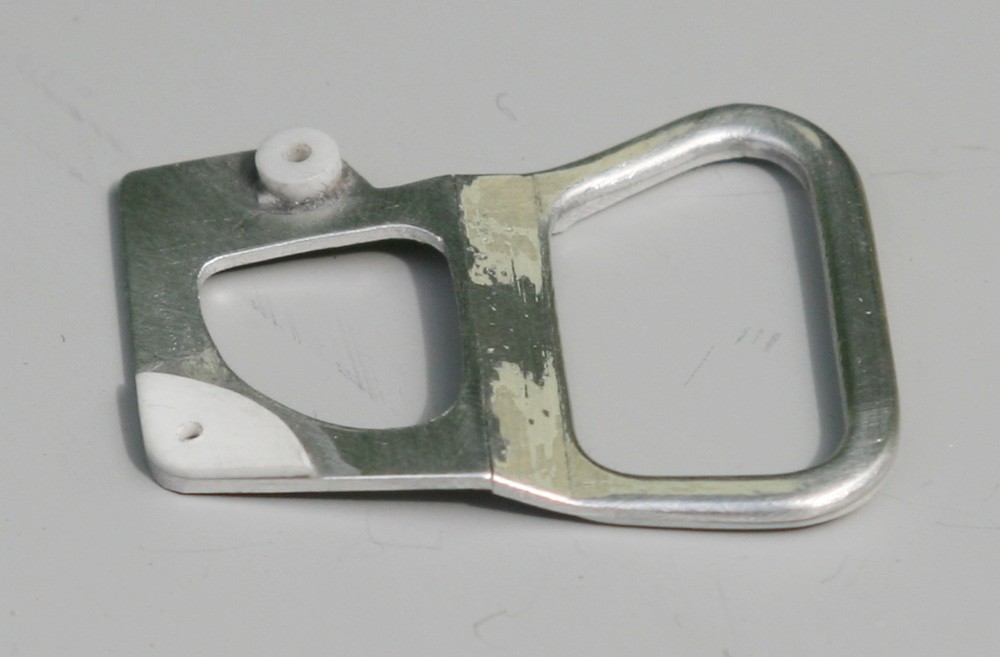 The jettison handle is made from sheet alloy and the styrene detail is attached with superglue. The styrene used to impart thickness to the hand grip is just visible. 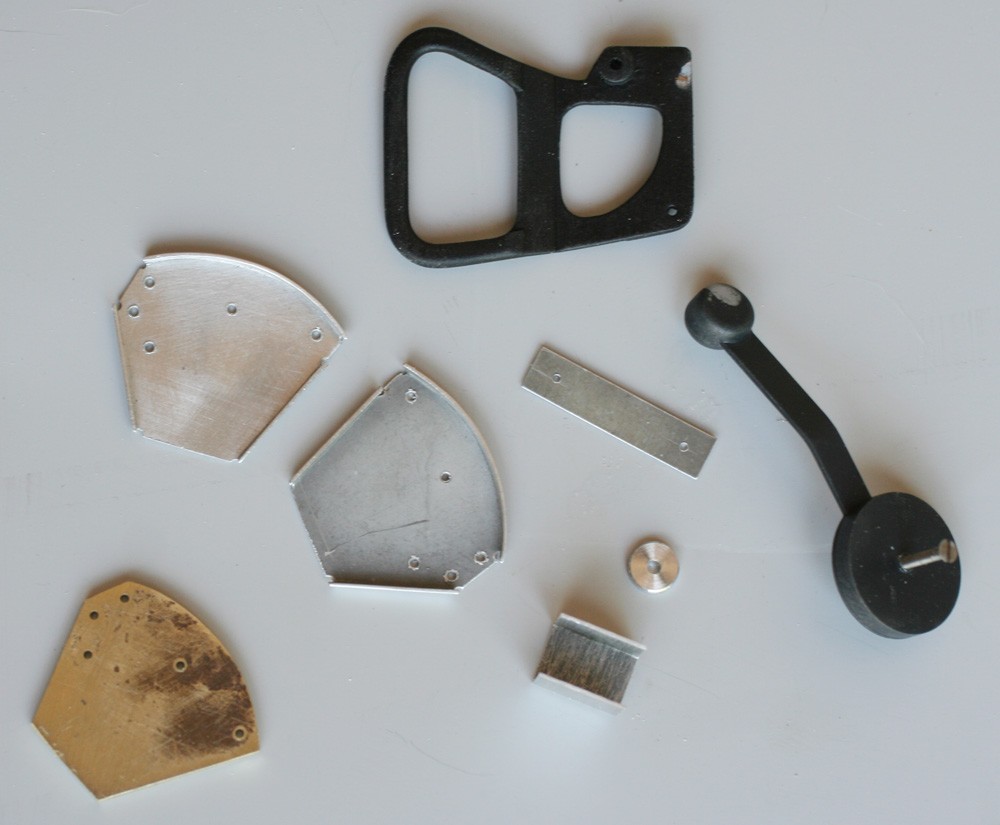 Some component parts of the assembly, including the brass former used to create the two sides of the mounting quadrant. 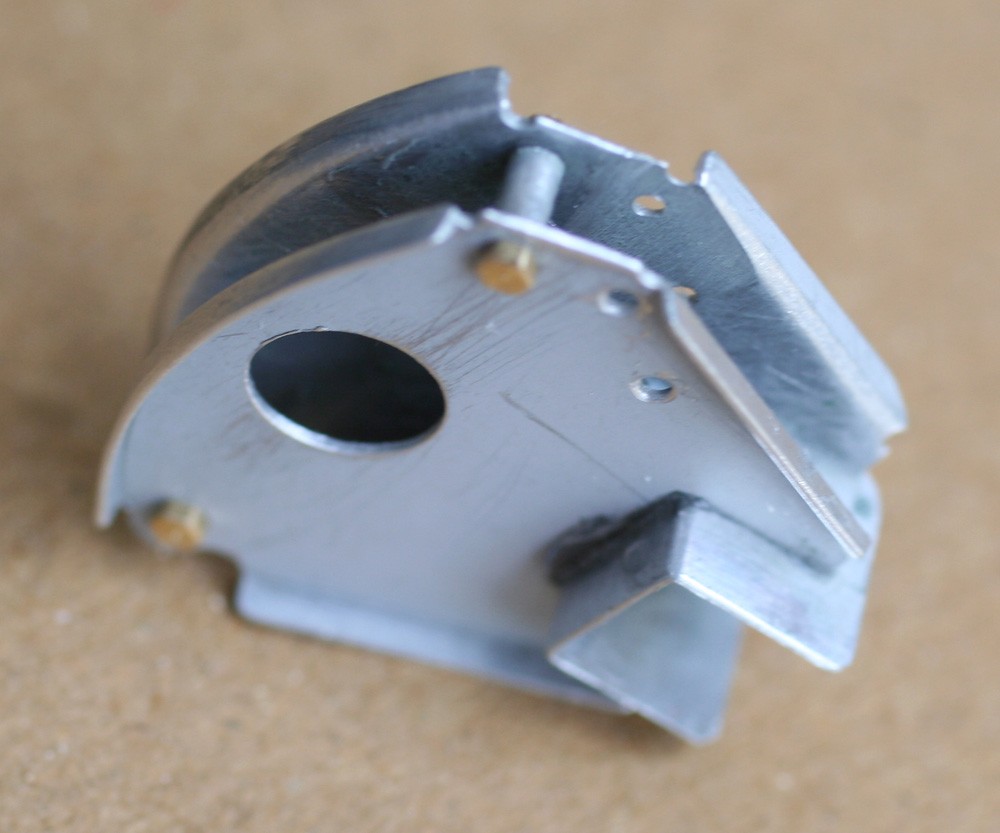 The quadrant assembled temporarily and including the 'foot' used to secure it to the bottom of frame 9. (Apologies for the poor quality of the photograph.)

The completed assembly in-situ. Note the shackle and cable attachment at the bottom as discussed in the text. The fuel shut-off lever has its own flexible control cable, but this has yet to be installed.