Having become preoccupied over the summer with fitting out the cockpit, I have had to remind myself of a more fundamental objective – to complete frame 11 and thereby open the way to building up the fuselage around the fixed canopy. But before the top half of the frame can be installed permanently I need to make and fit to it the head armour and voltage regulator, and to build the challenging seat support frame (which will be the subject of my next blog).

The pilot’s head armour is styrene sheet, with four holes for the attachment bolts and a slot for the shoulder harness straps, a simple job. And it took only minutes to machine the aluminium roller and make threaded holes in both ends. The two brackets are cut and filed by hand from a length of T-section aluminium extrusion of the sort available in home improvement stores for joining work surfaces and the like. They attach to the armour with eight 14BA bolts, while two 12BA bolts secure the roller. I used 12BA studs to fix the armour to the frame and turned the four spacers and four big hand tightening nuts from aluminium, although I omitted to knurl the edges of the latter.

At first glance the voltage regulator is daunting, but like many modelling challenges with scrutiny it can be reverse engineered into relatively simple parts, and, fortunately, I have the Supermarine GA of the item, which helped a lot. As my pictures show, the assembly breaks down into a rectangular basal ‘plinth’ (1) onto which sits two rectilinear boxes (2), a pair of cylindrical forms – easily shaped in the lathe (3) and a cradle on which the latter are seated (4).

The base is made from three layers of sheet styrene, laminated so as to achieve the required thickness and the effect of routed out corners. The two electrical boxes were made much in the same way, and my pictures show the small brass pegs that I used as a simple jig when filing the rounded ends of the larger of the two. Thick superglue is ideal when laminating plastics for its strength and rapidity, and I finish with fine steel wool to lightly soften all corners and edges (hard edges seldom look natural).

I turned the cylindrical parts from a black plastic material, using a small make-shift cutter made from mild steel to create the domed ends. It looks crude, but it slices through plastic beautifully. The cradle started life as a scrap of left over two-part moulding resin, milled to thickness, then drilled to match the diameter of the cylinders before being sectioned up, again a very simple process.

When assembled, sprayed black, mounted on an aluminium back-plate and detailed with small screws self tapped into the soft plastic and with the electrical cables (knicker-elastic painted grey-black), the finished part looks convincing enough.

Most plastic kit builders will be aware of a technique called ‘dry brushing’, which brings out the detail in small parts after painting. I do not use dry brushing for my large-scale models, or at least not often. Instead, on items sprayed dark colours I use an old blusher brush. While there is no paint in the hairs, there is sufficient dirt and contaminants (it’s been knocking around my workshop for years) to highlight edges and raised detail very subtly and effectively indeed, and with little danger of overdoing things. Try it… it really does work!

The final task involved making the simple curved shield that bolts beneath the top arch of the frame, presumably to keep the abovementioned electrical cables free of the harness. The reverse curvatures involved required pinching the litho plate in the vice using a very simple press made from thick plywood. This retains the lateral downward curvature of the piece while the upturned lips are created fore and aft. 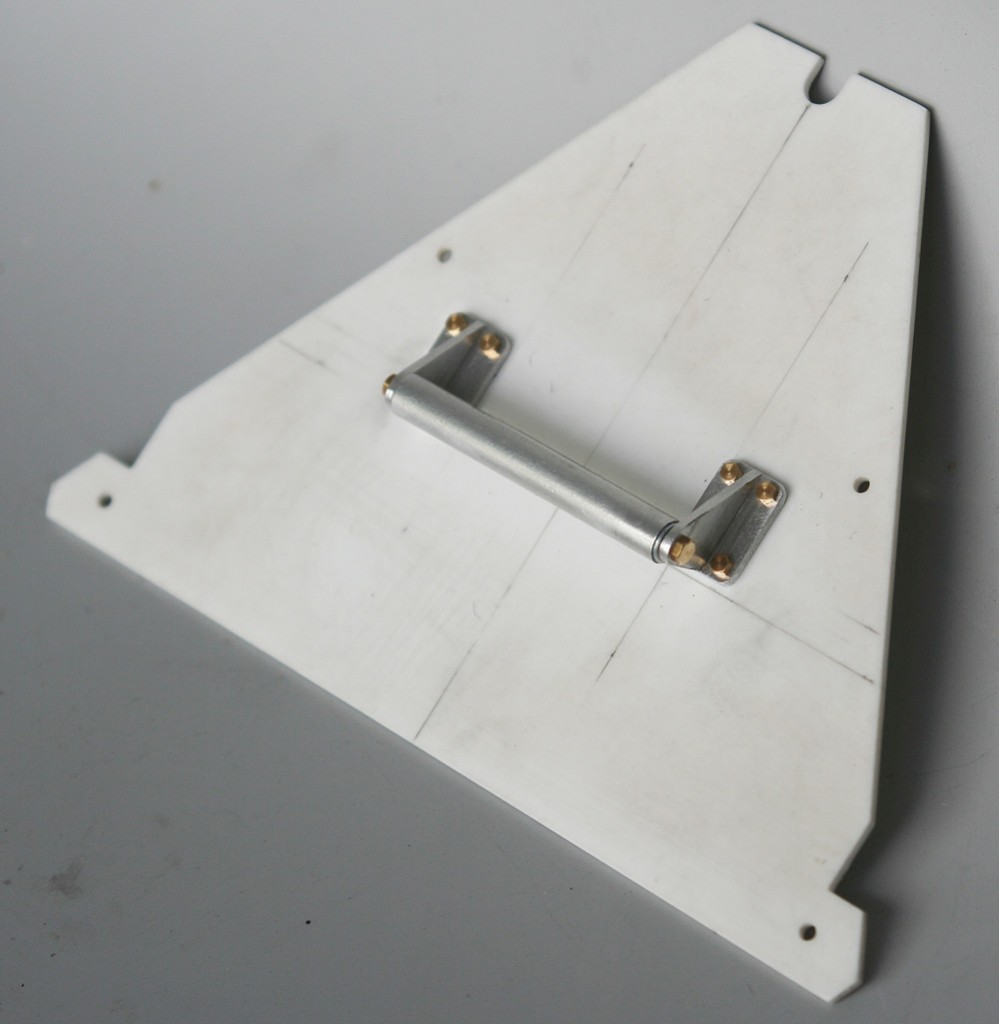 The head armour assembly completed and ready for painting. 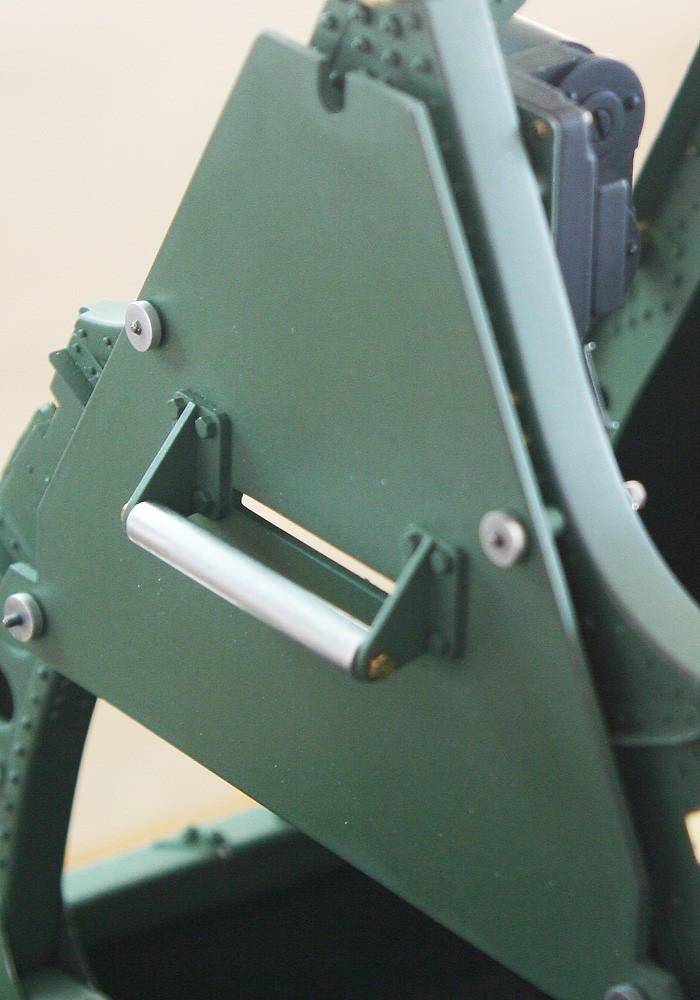 It is bolted to frame 11 with 12BA studding. In the real aircraft the four hand nuts have knurled edges. I omitted the knurling! Note the spacers used behind the armour 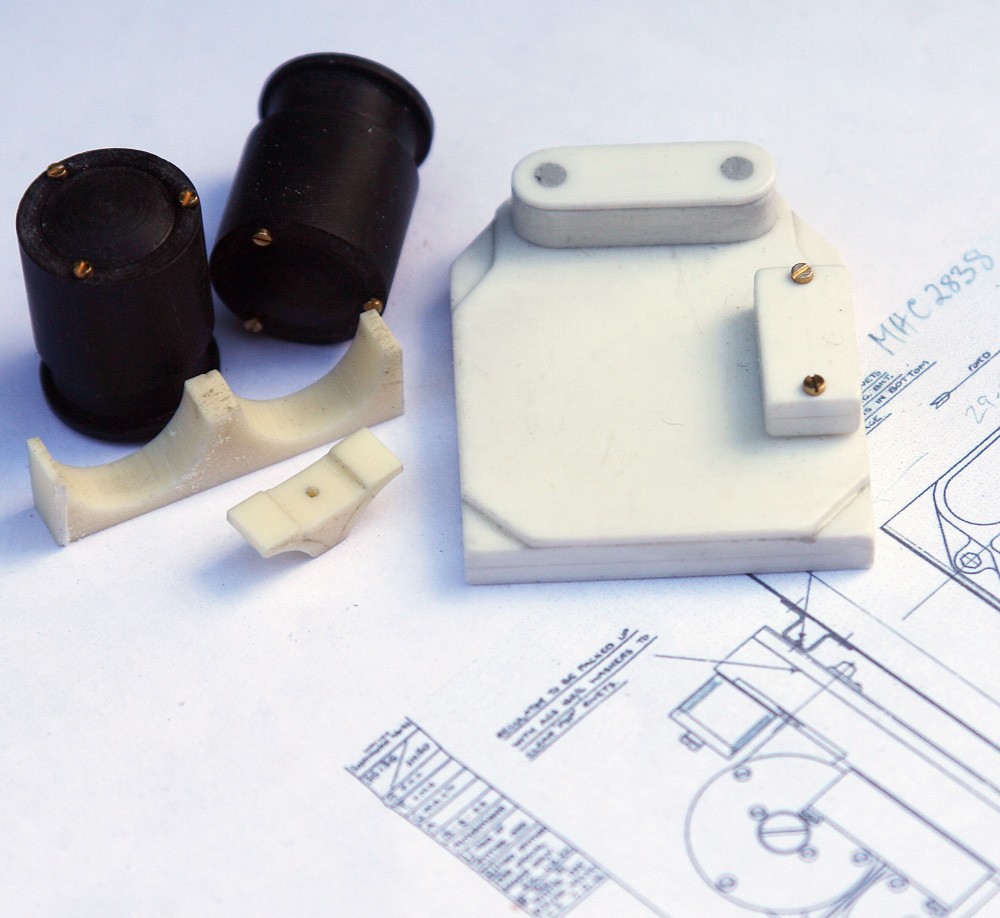 Component parts of the voltage regulator, much of it built up from laminated styrene sheet. 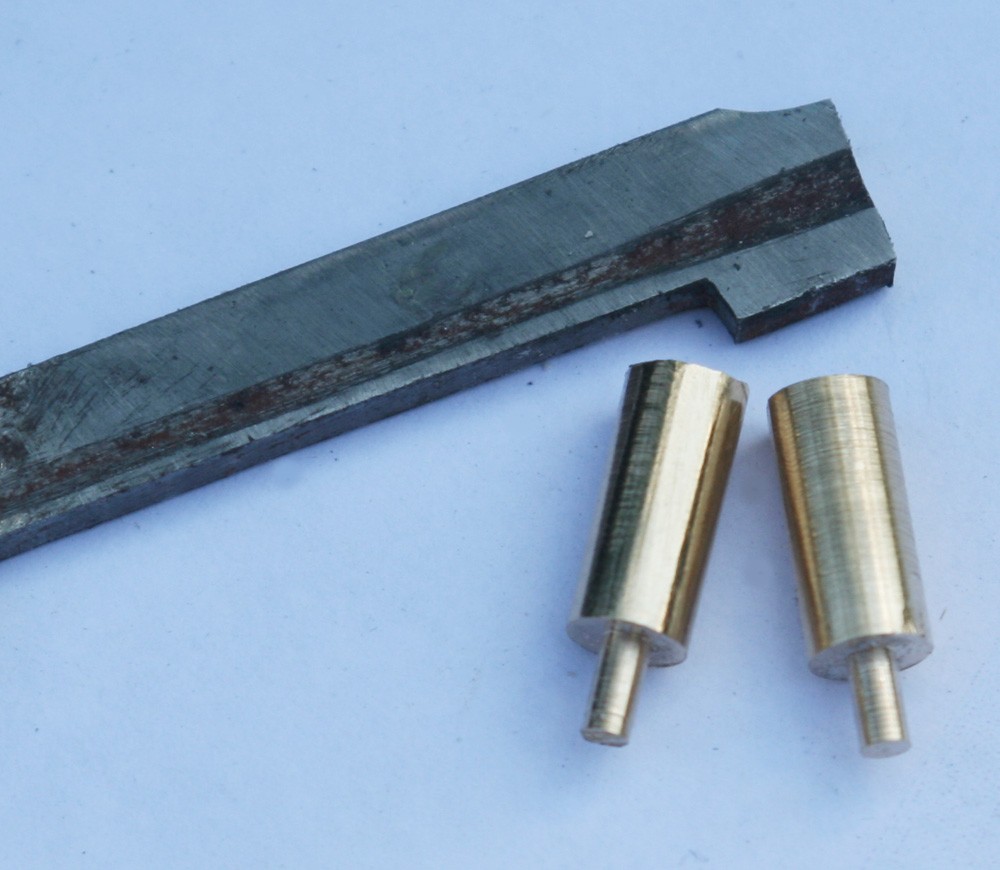 The lathe cutter made from a scrap of mild steel and the two brass jigs used to shape the ends of the electrical box. The two locating holes in the workpiece are simply closed with plastic filler afterwards. 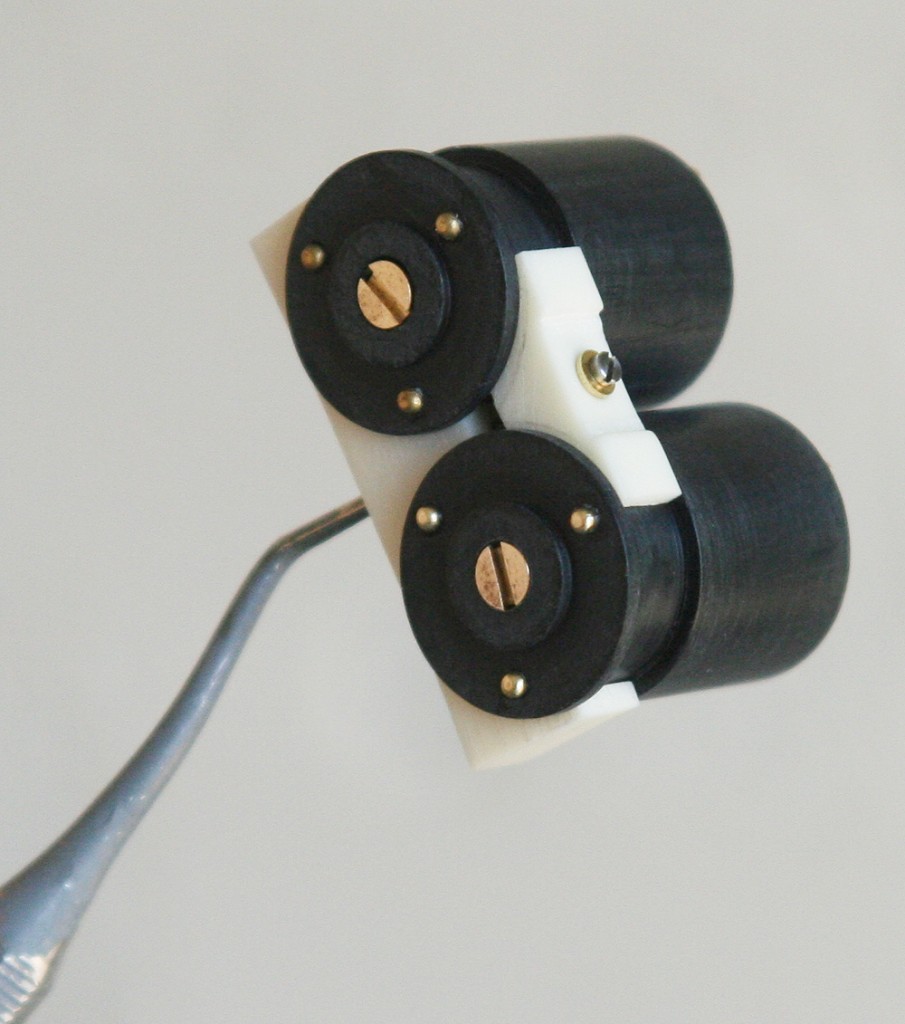 The cylindrical parts are attached to the base using a cradle, which I replicated by machining hardened resin. 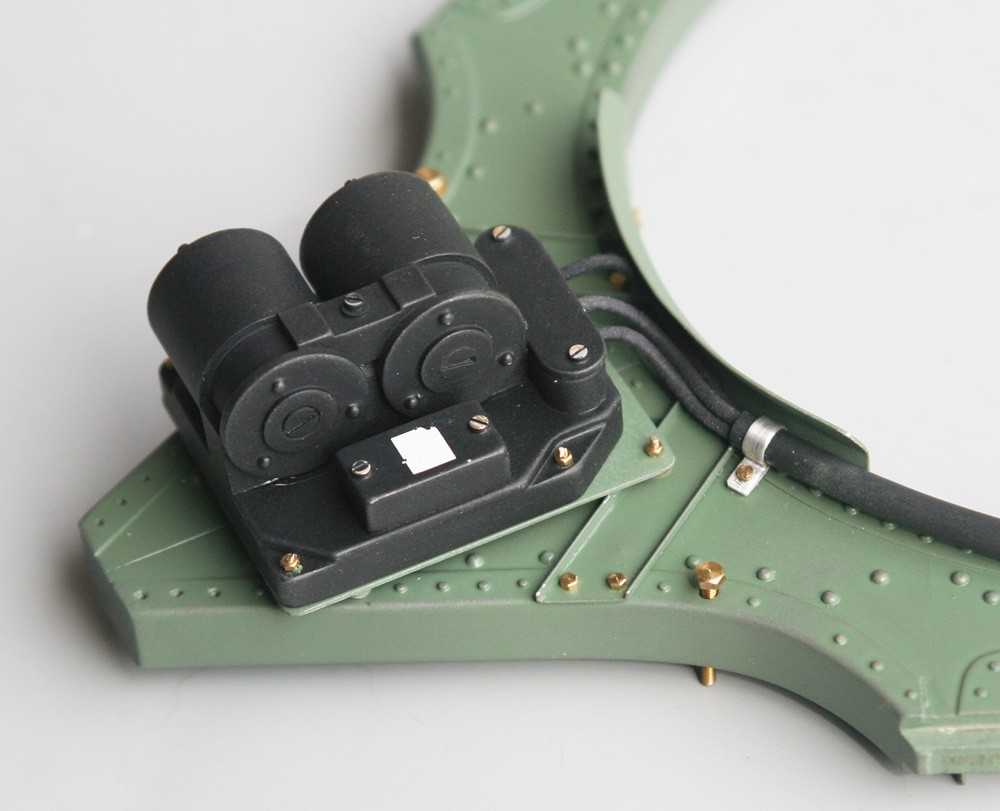 The completed job bolted in position and detailed with the electrical wiring. Note the subtle highlighting that can be achieved just by the used of a 'dirty' blusher brush. 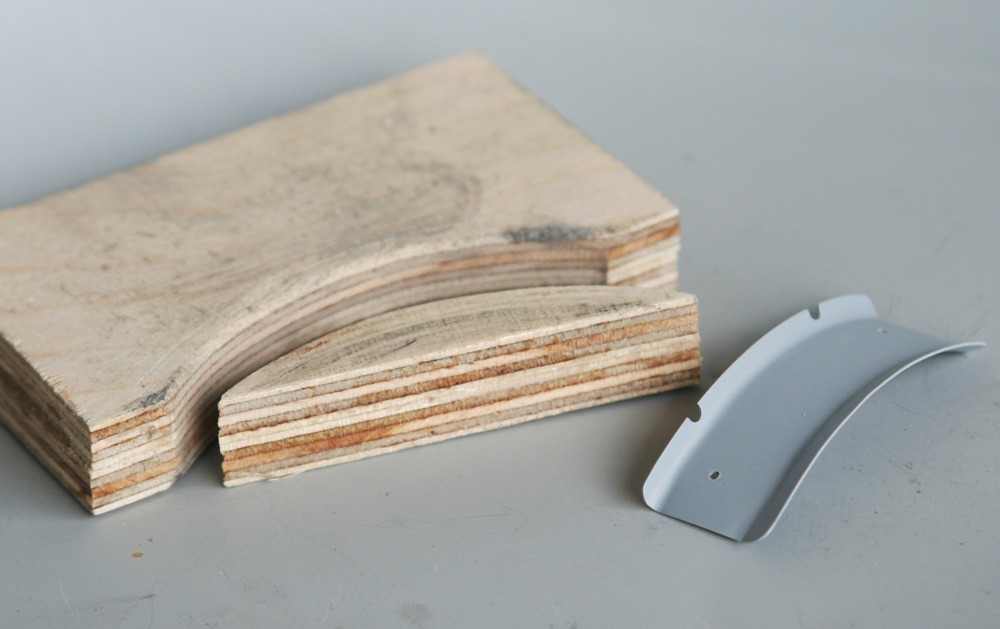 My ad hoc 'press' and the completed part made from litho plate. It may look crude, but it works.