As far as I know, the seat support varied very little through the Spitfire’s evolution, so what I have arrived at for my Mk IX is (hopefully) indistinguishable from that in my first big model, albeit via a slightly different route.

The obvious start point is the two vertical channel-section beams, so I began by making a simple jig from mild steel plate that would guarantee an identical pair. The first picture shows how: The steel, equal in thickness to the beam’s interior dimension, is scribed to mark the front-facing edges and drilled at the location of the lightening holes. This makes manufacture very easy: Two pieces of un-annealed litho plate are cut to exact depth and folded tightly around the jig. Pilot holes are drilled, roughly centred on each hole in the jig, and the full holes reamed to size with a large round file, working alternately from either side. With all the holes completed the excess litho plate is scored to the scribed lines on the jig and broken away.

In the real aircraft, the beams are enclosed by a shallow internal channel-section, which is riveted down their entire length. I fudged this by filling the sandwich with sheet balsa, cut away so as to be invisible through the lightening holes and faced neatly with styrene strip. Superglue is perfect for this, and gives a very sturdy job, and I used the very thin variety to ‘harden’ the balsa at the bottom of each beam before drilling the holes for the two vertical brass spigots that engage in sockets at the bottom of frame 11.

Both beams feature paired reinforcing plates at top and bottom, which I made and attached with superglue before drilling the holes for the cross braces. The time consuming task is the rivet detail, and here I used 3/32-in aluminium snap heads, supplemented, as the drawing dictates, with 14BA brass bolts.

The two beams took about a day and a half to make, and turned out nicely, albeit with the significant omission of flanges around the lightening holes. These are simple enough to do by cutting the final holes just slightly undersized and turning two simple dome headed punches for use while the piece is still on the jig. Yet faced with such an enormity of detail in a model such as this, I am pragmatist enough to accept that – just occasionally – a corner needs to be cut if the thing is ever to get finished!

Almost all of the remaining parts are made on the lathe. Both cross braces are turned from solid brass bar and have spigots where they fix to the beams. In the lower brace these are made in the piece and threaded 10BA; in the upper one they are made as separate pieces, which slide into holes drilled in both ends. The two diagonal braces are turned brass tube with the lower ends plugged by machined brass fittings drilled for 14BA bolts. The arrangement, including the small aluminium fixing plates, is shown clearly in my pictures.

I cut the two slender arms that hold the top of the seat from brass rod with turned brass bushes at either end – one larger in diameter than the other, and to facilitate soldering I turned tiny spigots on the ends to fit into locating holes in the bushes. However, before soldering the starboard link, I chucked a length of brass hexagon, drilled it through and parted off three pieces to represent the adjusting sleeve with its two small locknuts.

A major feature of the seat support frame is the two cylindrical compensators used to raise and lower the seat against the pilot’s weight. I cut them from thin-walled aluminium tube, but used brass from which to turn, mill and slot the attachment lugs that pivot from upper cross-brace. I made plunger rods from lengths of bright mild steel with turned brass fork ends, and they piston back and forth inside thick-walled styrene liners which I used to pack the compensator barrels. Luck lent a hand here, because I had some styrene of exactly the right internal and external diameters.

I plan to make the operating handle and its cross shaft when I tackle the seat itself, which leaves only the two hand operated rapid release plungers that secure the seat mount to frame 11. The challenge is their forward tapering shape and the need to represent the spring-loaded plunger mechanism that is clearly visible inside.

Here, briefly, is my solution: Step 1, mill a channel-section from solid brass; 2, mill a locating groove on the front and solder into it a turned brass tube; 3, pack both flanks of the tube with plastic metal and file the triangular shape; 4, square up the ends and part off two equal lengths; 5, cut strips of litho plate and form them around the work pieces to make covers; 6, drill and file a stepped slot in both covers; 7, drill holes for the attachment bolts; turn the two small internal brass plungers and create their dummy springs from wire.

The problem with the release handles is their spherical knobs, which resulted in several failed attempts. Finally I resorted to 1/2-in. long alloy snap head rivets, and by dunking the heads in quick setting two-part mounding resin, I got the thickening material to accrete into an acceptable spherical shape. After a further dipping into thick aluminium paint I arrived at a pair of handles that look convincing enough cut to length and glued into their pre-drilled holes. 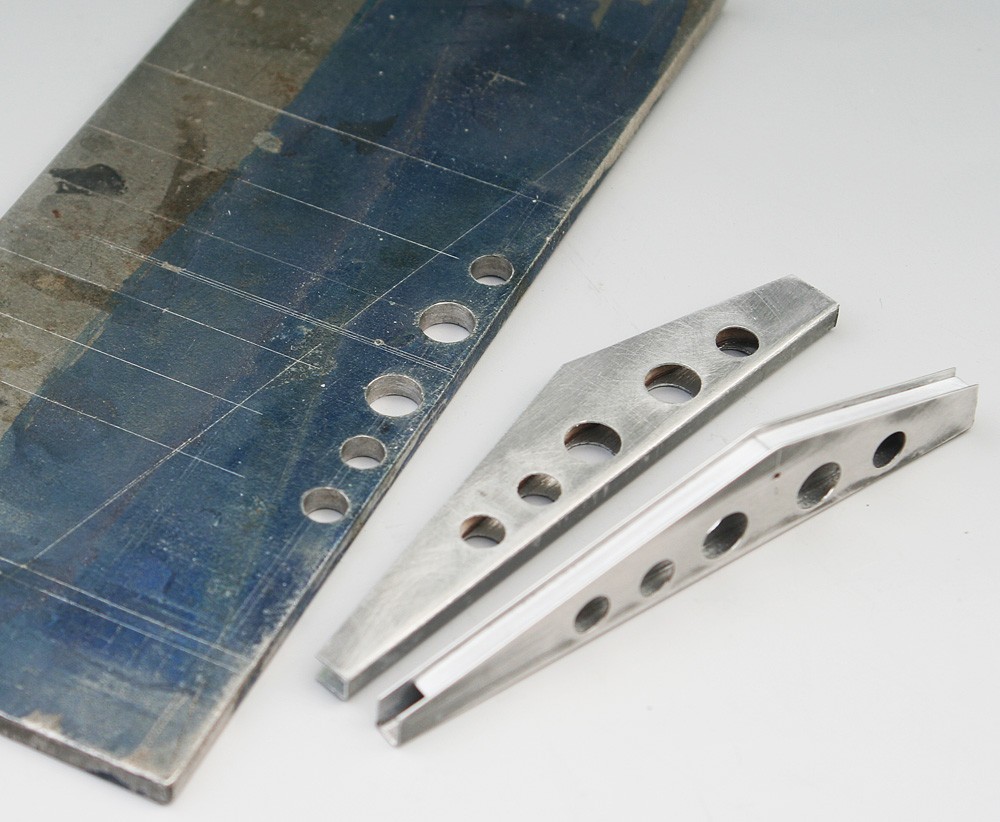 The two channel-section beams and the sheet steel jig on which they were formed. 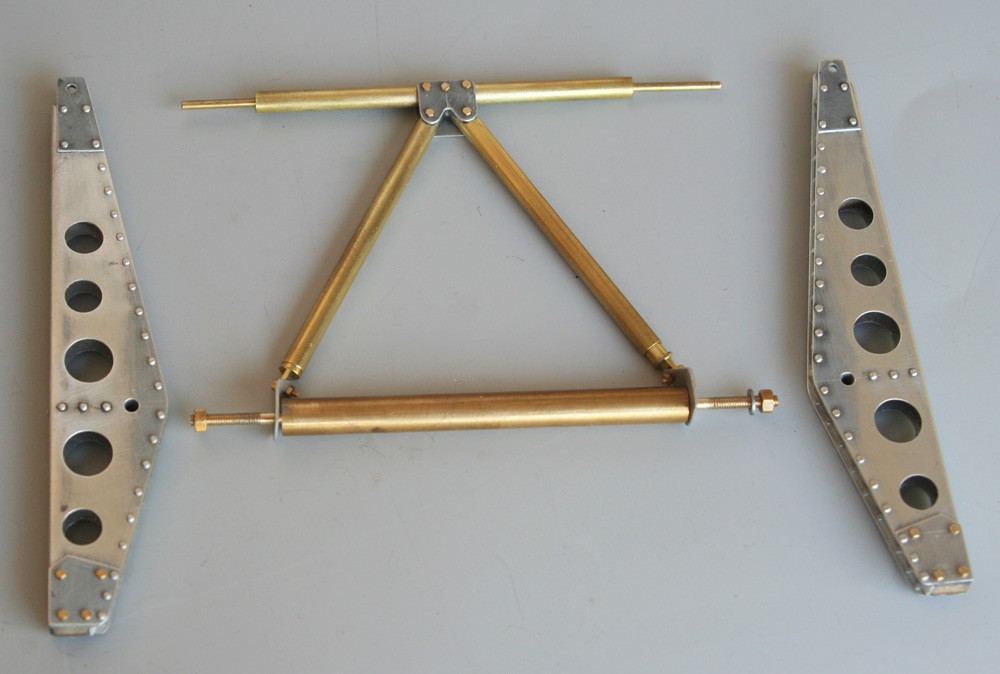 Next came the tubular cross members and their diagonal braces, which I made from brass for convenience. By this stage most of the prominent rivet detail had been completed. 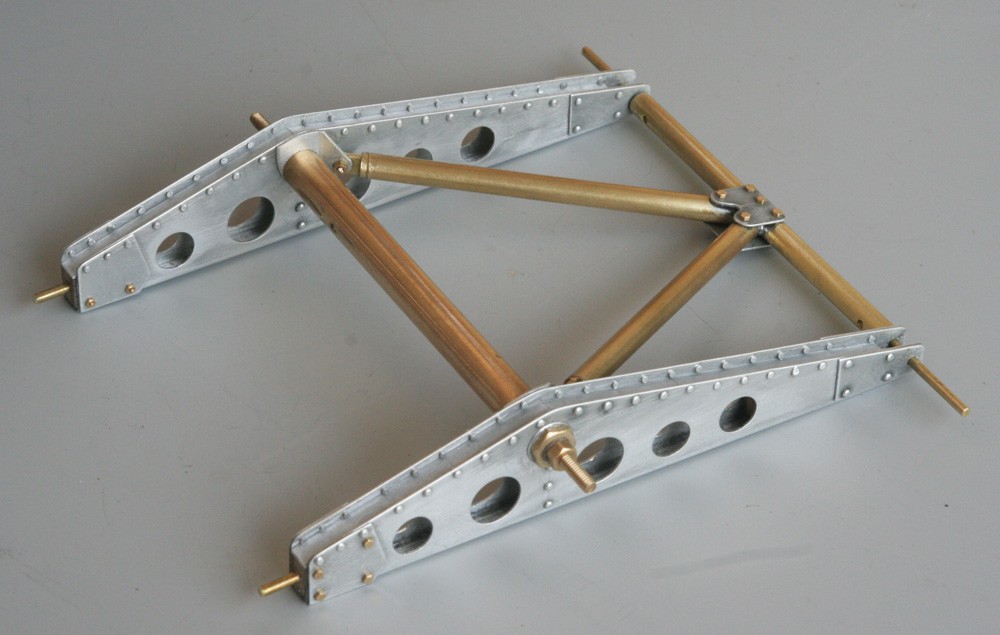 The basic structure assembled. Note the styrene infill enclosing the beams and the two spigots at the bottom which engage into holes in brackets at the bottom of the fuselage frame 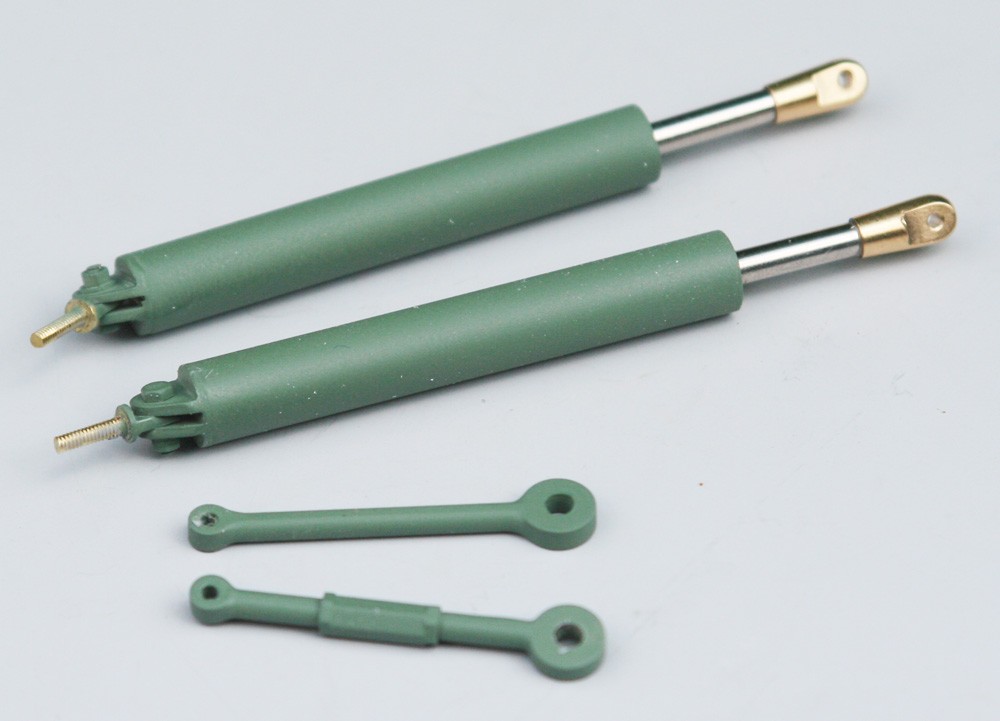 The compensator barrels and their steel plungers, and the two short retaining arms for the top of the seat. 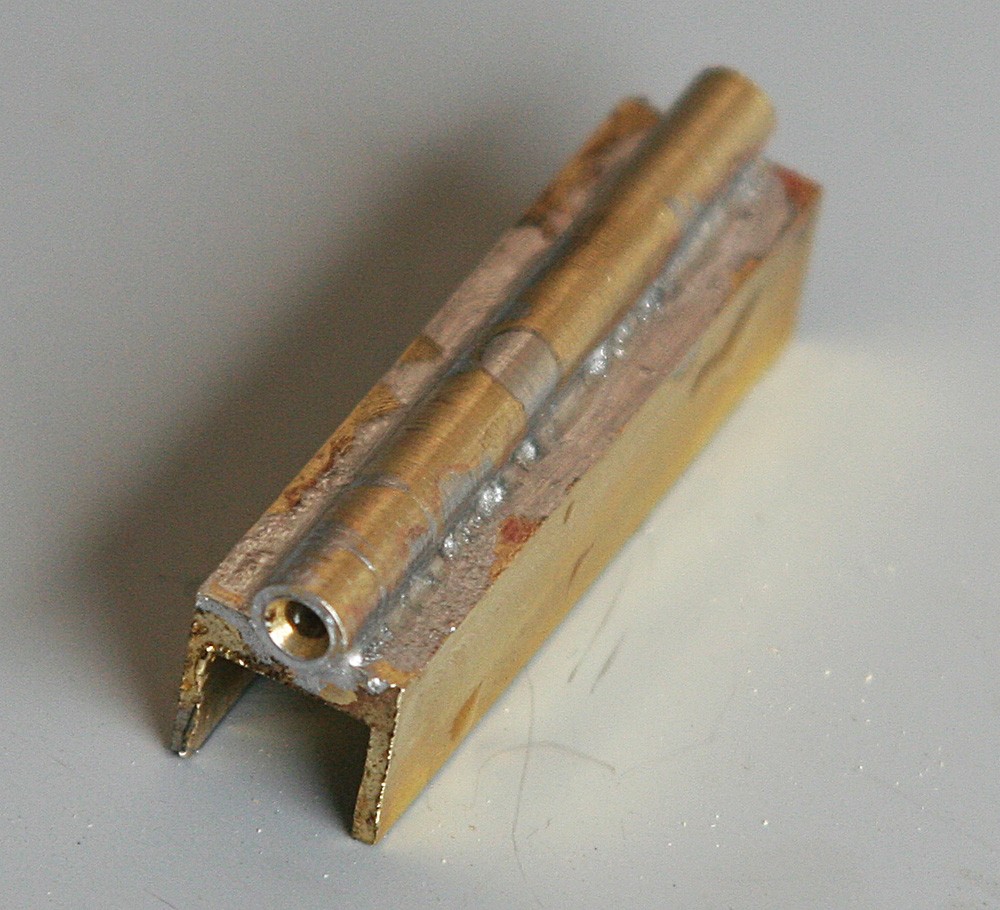 The milled and soldered blank from to cut housings for the pilot's seat quick release plungers. The streamlined shape is achieved by filling the angle between the tube and flat with plastic metal. 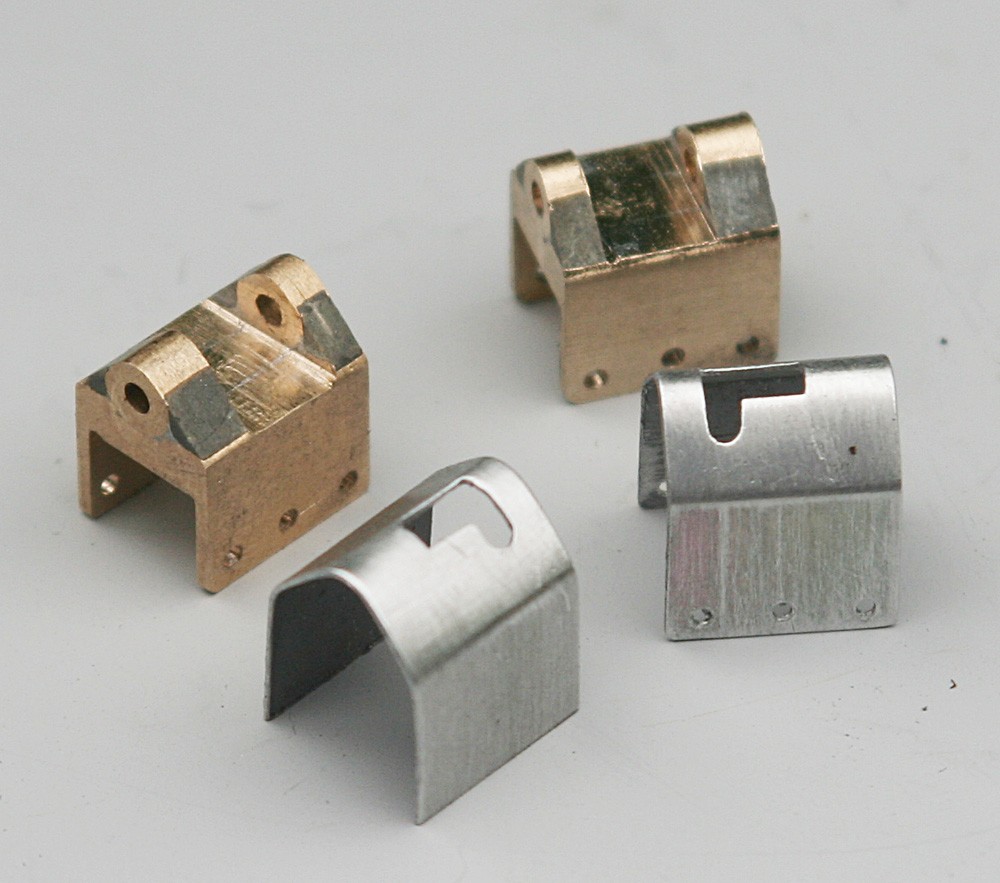 The two pieces are cut to length and each one is slotted to accept its plunger spring. Litho plate covers are shaped using the underlying brass as a former. 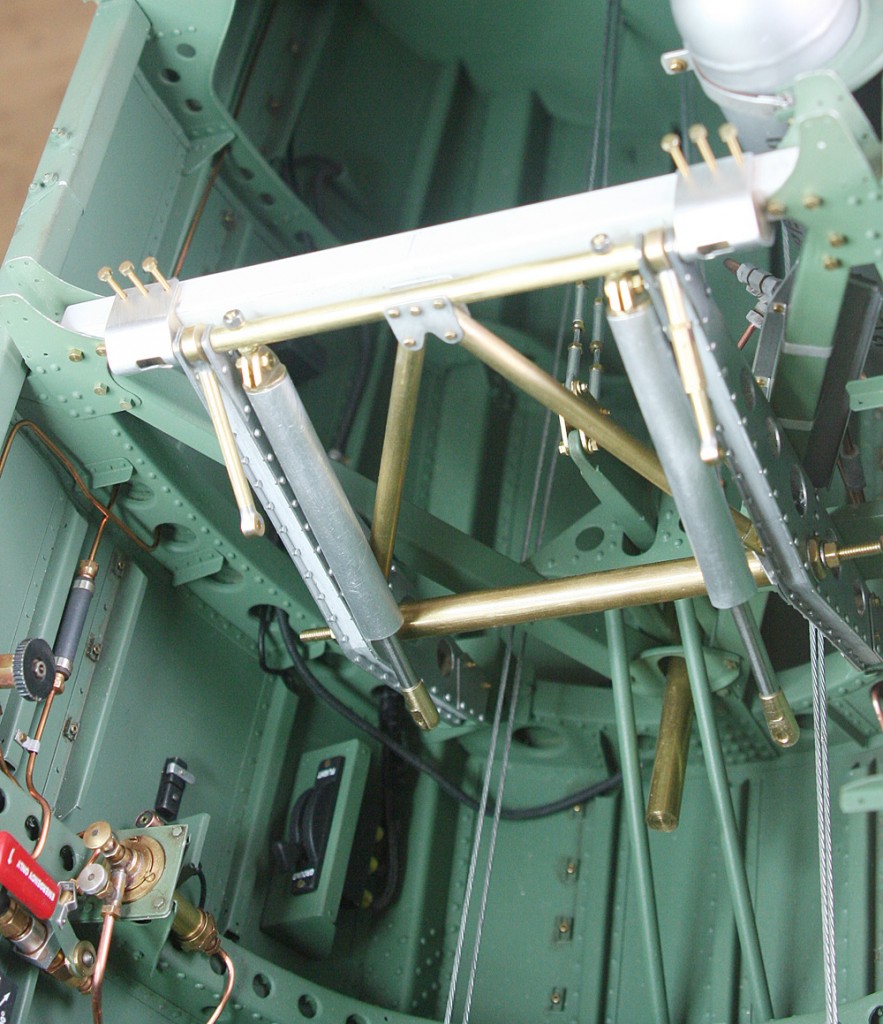 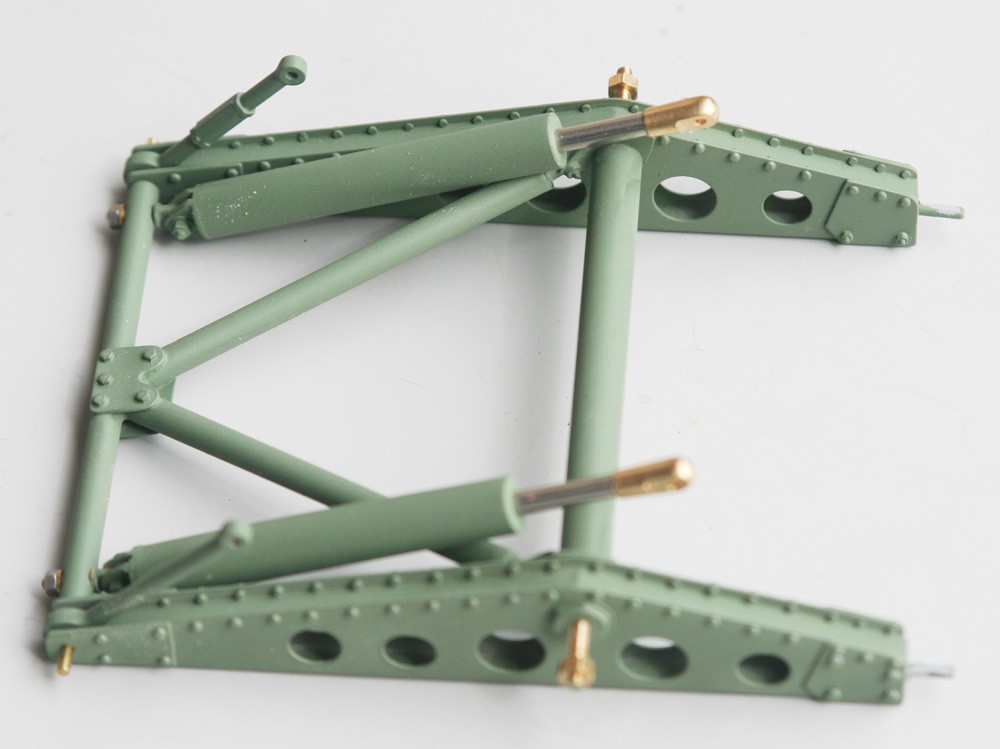 The almost complete seat support frame after spray painting. The seat operating handle and its ratchet mechanism will be added at a later stage.