I referred in my last diary entry to the advantages to be gained from being able to analyse subtle and complex shapes with the help of a ‘reductionist’ eye. The oleo scissor bars serve as illustration, and the exhaust stack provides an even better one.

I decided to fit the late-type stack, primarily because it seemed an easier option than the fish-tail pattern, yet even here the challenges multiplied the more I studied the detail of the individual exhaust pots: Viewed side-on the outlets appear almost straight and angled backwards and downwards; from the front of the aircraft they reveal a subtle, curving upward flip, and rather than being straight, they can be seen to flare slightly. Moreover, and unlike the P-51D, there is no part-concealing external shroud to facilitate short-cuts, so I would have to model the assembly in its entirety.

Each time I visited the problem I found myself closing the file and walking away, yet like so much in scratch building, the solution – once I’d got my eye in – turned out to be far easier than anticipated – a cuboid and a cylinder!  The cuboid is notched (Photo 1) to establish the exact backward rake of the outlet in plan-view; the slight ‘upward flip’ is captured by canting the cylinder over slightly in the perpendicular plane (Photo 2), and the flare emerges naturally during carving from the thickness differential between the two pieces.

So the fundamental shape of the piece is established by the relative positions of two simple geometric forms. The rest is down to fast-setting car body filler and a rasp with which to sculpt the final shape. Modelboard is ideal for pattern making jobs like this because it cuts and sands very easily.

I cut the oval flange from thick styrene sheet, marking the positions of the four bolt holes with a small drill bit, and I represented the adjacent reinforced section with a glued on strip of thin pewter sheet. Weld seams fore and aft of the outlets were added as irregular blobs of thick cyanoacrylate. This can look a little overdone at first, but becomes convincing when flattened with a fine file after the glue has set.

The exhaust pots are obviously ‘handed’ so I needed to produce two patterns and two silicone rubber moulds. Mass production of the resin castings followed, but how to make them look hollow?

Here the reinforcing collars that feature prominently on the originals came to my rescue. I parted off 12 of them from a length of thin-walled copper tube that I had in stock. When turning the two modelboard cylinders I recessed their outer ends to a depth of around 3/16-in. and to the exact internal diameter of the copper ferrule. Once I had produced my castings, I used a large centre drill mounted in the lathe chuck to cut deep cone-shaped holes in the outlet end of each one, then glued the ferrules in place with thick cyanoacrylate. Following a final dressing internally with a rotary bur and a coat of dark grey mat enamel, the deception is almost perfect.

Since the internal manifold shroud is partly visible behind the exhaust pots it has to be represented, at least in part; moreover, it made sense to utilise the back of it as a sturdy mounting plate on which to assemble the pots in linear aray.

The crucial thing here is the angle at which the back of the shroud makes with the vertical, which is predicated by the Merlin engine exhaust outlets. Fortunately this is indicated clearly in Paul Monforton’s drawings, so it was just a matter of incorporating it into three small mahogany supporting blocks per side and gluing these into the underlying wooden structure.

My photograph shows these blocks in place and the back-plate fastened to them by countersunk screws. Note the remainder of the wedge-shaped cavity has been lined with litho-plate, thereby creating the geometry of the shroud.  The back-plate is cut from 2mm thick alloy sheet for rigidity, while the upper plate, which supports the five tubular stays, is made from 0.5mm alloy.

After marking the pot positions accurately (engineer’s blue helps enormously) I drilled the back-plate through with two 6BA clearance holes per pot. Then, with each pot offered up in its precise location, I drilled down into the resin to a depth of 1/2-in. or so to take a pair of 6BA studs, each secured in place with cyanoacrylate. With the process repeated eleven more times I could assemble all twelve pots using twenty-four 6BA nuts.  Thus the pots are bolted to the back-plate, and the back-plate is screwed to the airframe, allowing for rapid and convenient installation and demounting. 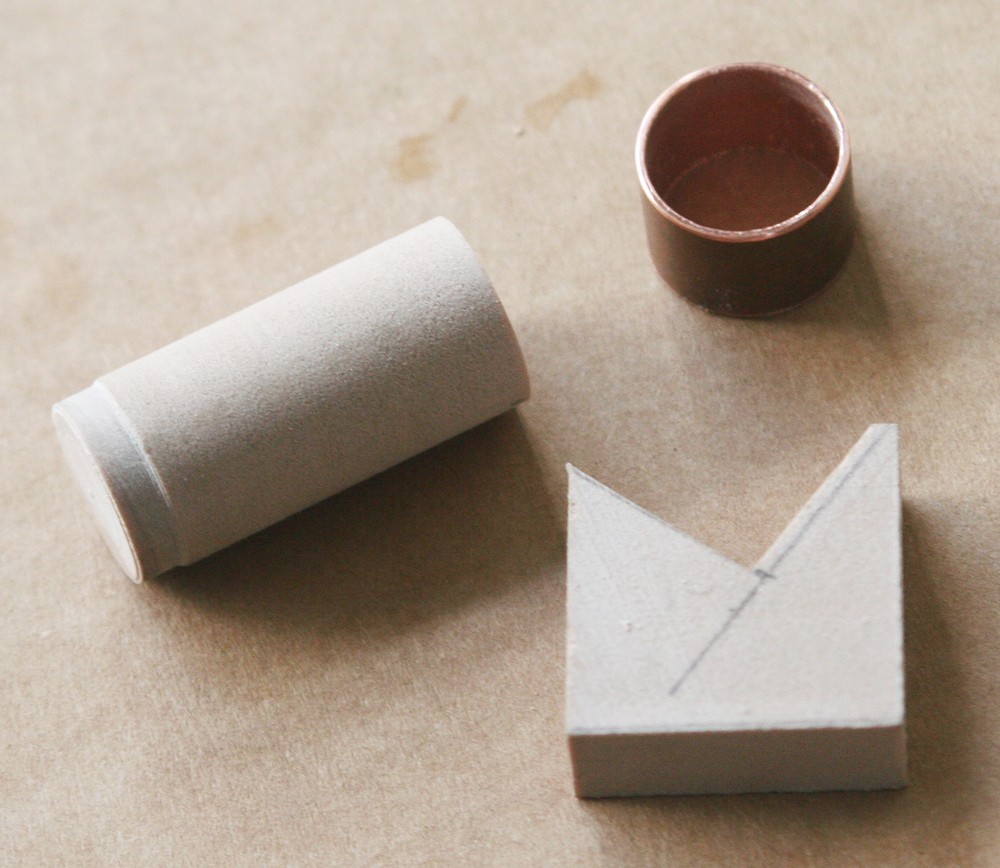 The two basic forms of the pattern and the copper ferrule that will complete the outlet end of the resulting resin casting. 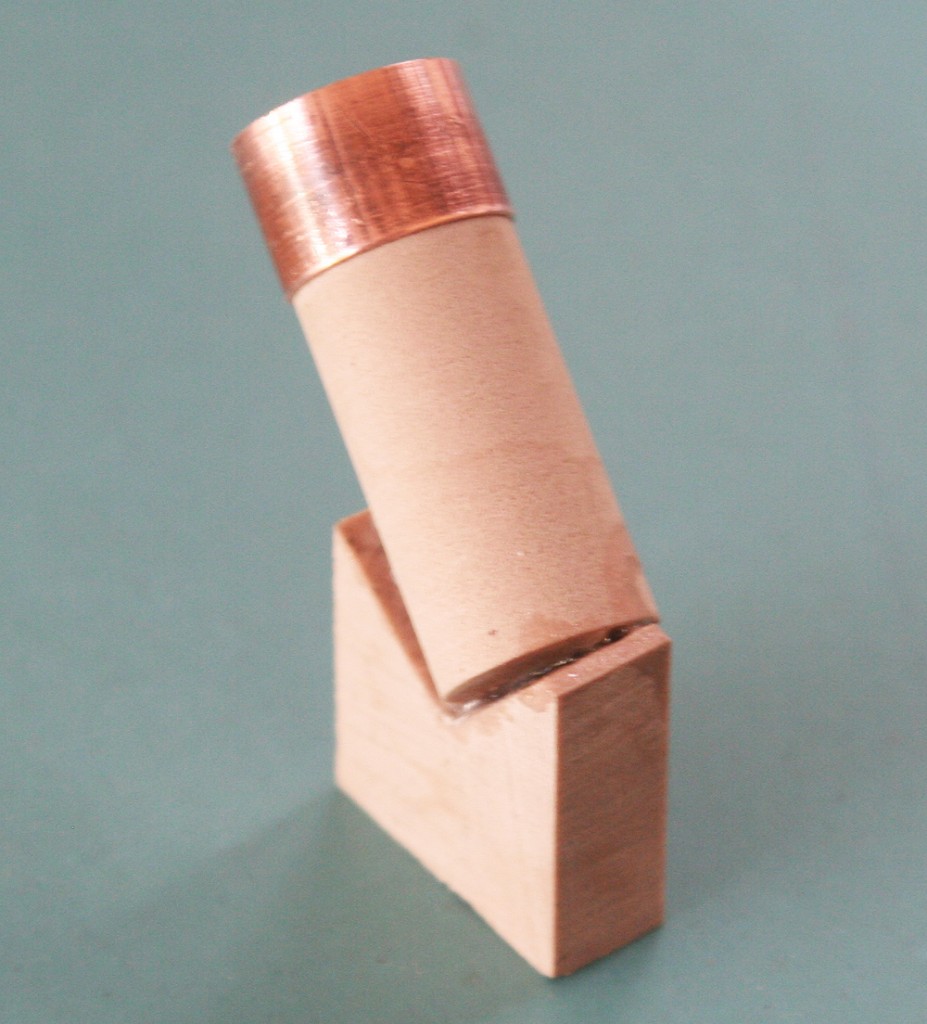 This photo shows how the cylindrical outlet is canted over slightly. The gaps are filled with car body filler prior to carving the shape. 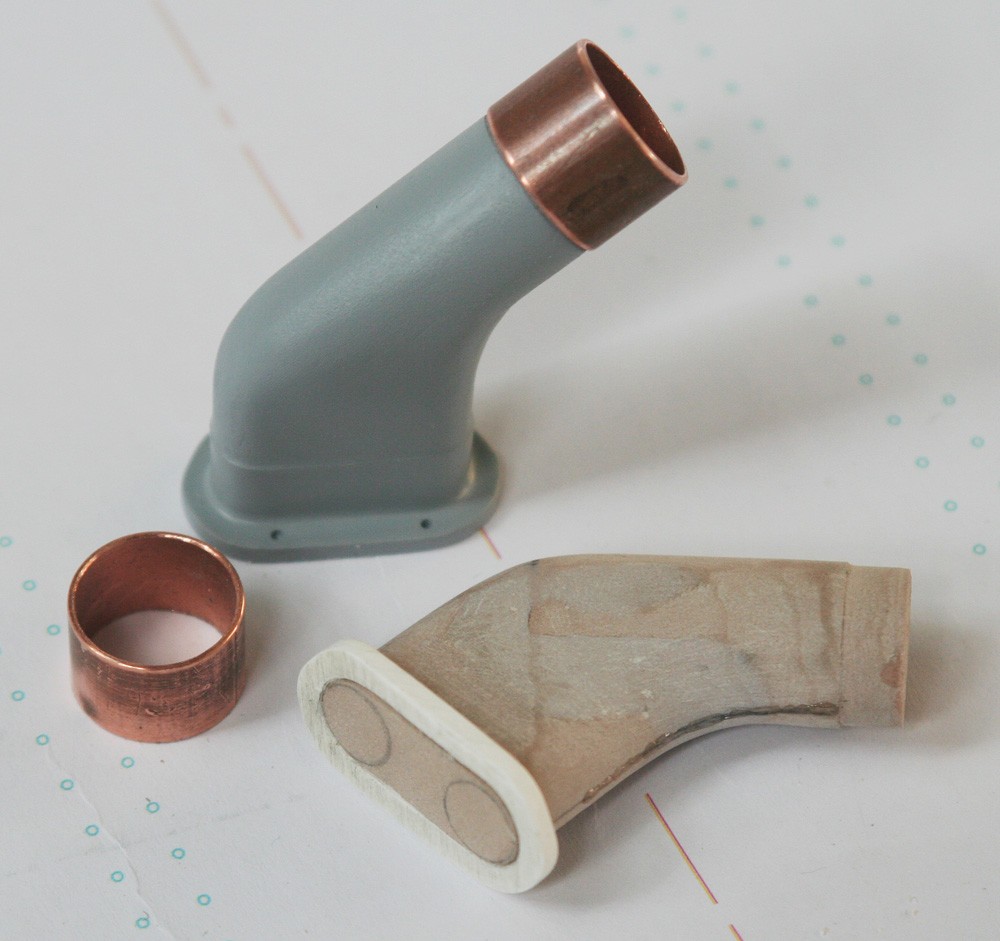 The two patterns are almost complete. Note the flange cut from thick styrene sheet and glued on. 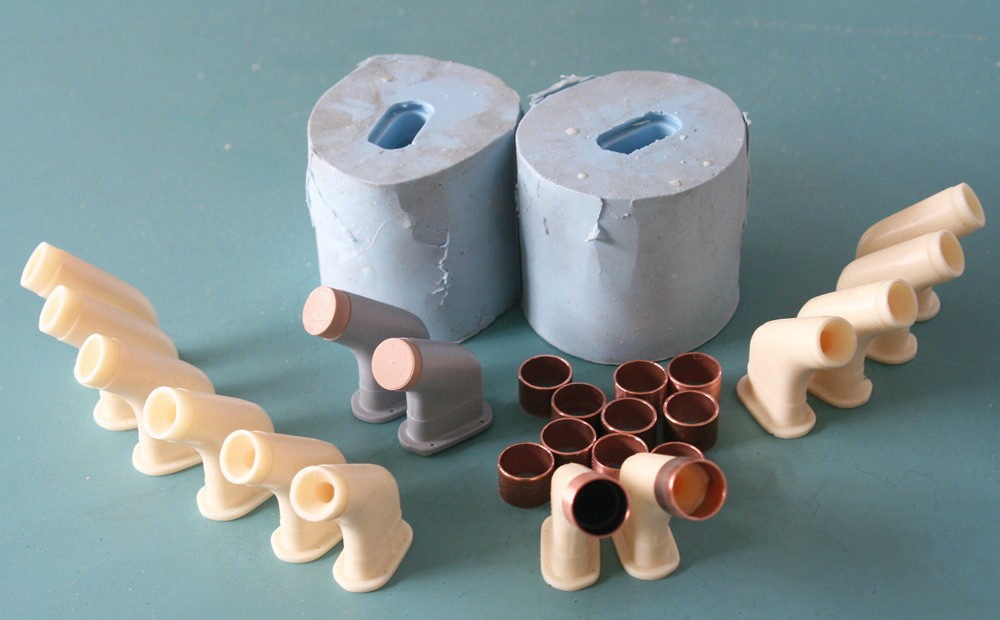 The resin casting stage: two patterns, two silicone rubber moulds, two sets of six castings and 12 copper rings. Note how the ends of the castings have been drilled out into a cone shape. 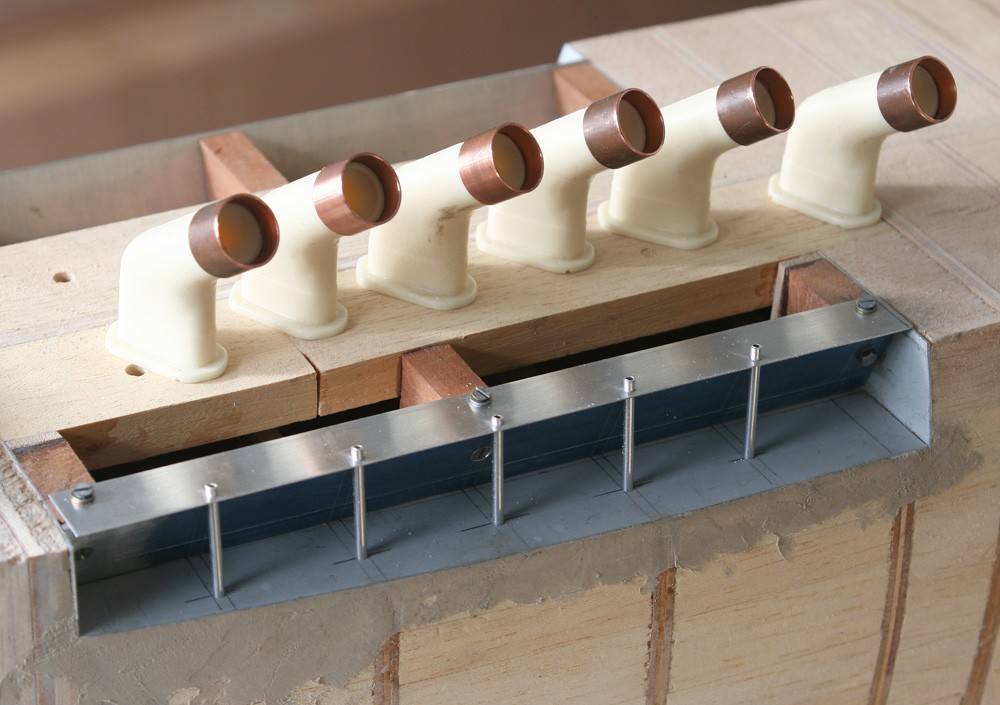 The port side set ready to fit. The back-plate onto which they will be bolted can be seen, along with the small hardwood blocks that establish the downward-facing angle at which they are mounted. 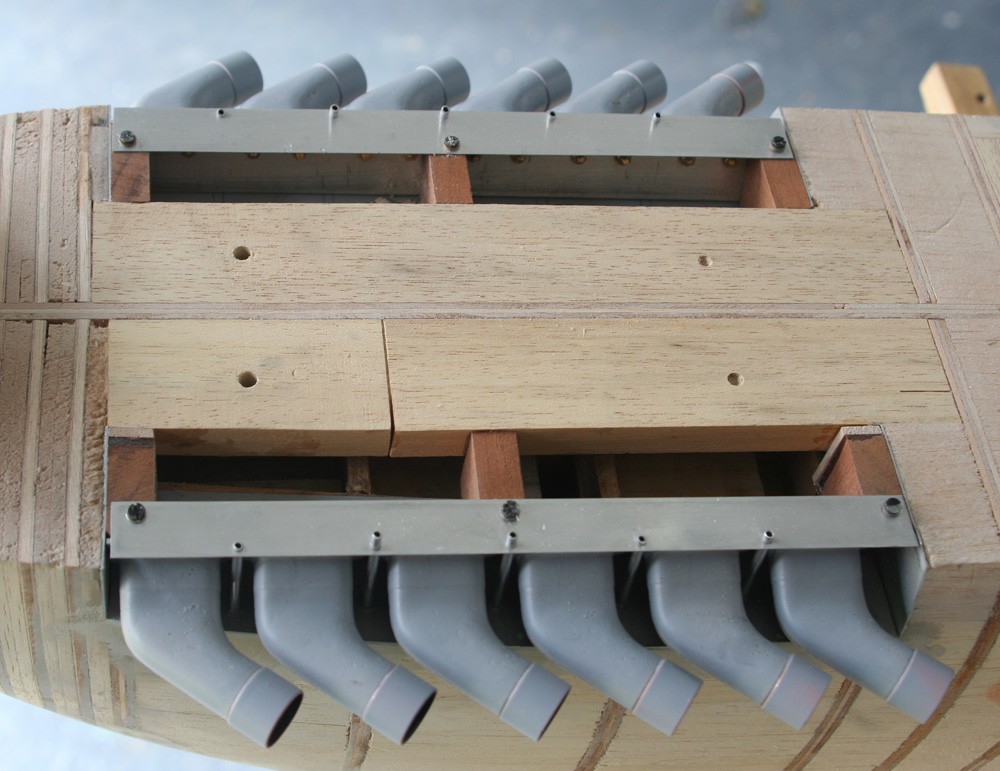 Both sets installed, along with the tubular stays, which in the real aircraft strengthen the internal manifold shroud. 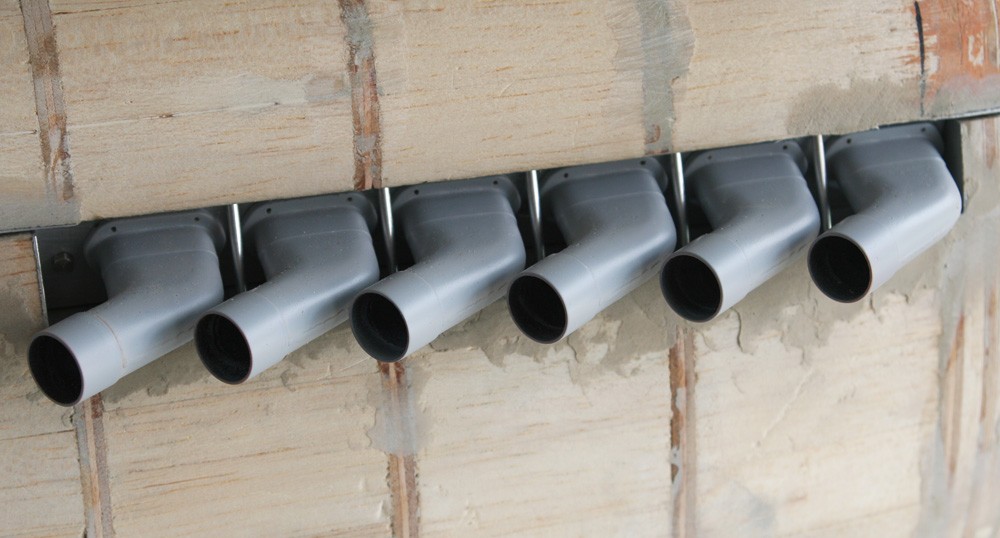 Note the holes drilled through the flanges for dummy studs and nuts. These will be installed after the array has been painted and weathered. 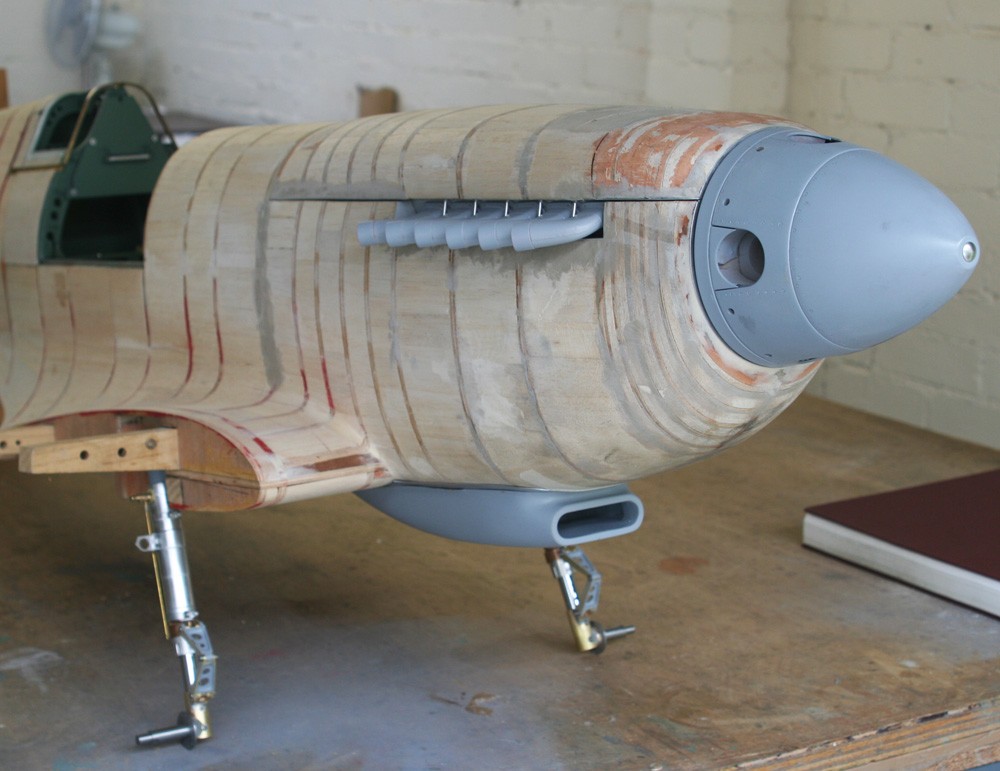 The completed assembly, and rather nice it looks!