My preferred technique for producing aircraft instrument faces (described in my book, Spitfire in my Workshop) relies on a device called a photo mechanical transfer (PMT) camera. Unfortunately, this bulky piece of darkroom kit, widely used in graphics studios during the ‘70s and ‘80s, has been totally superseded by digital technology, and I have been forced to switch to my Apple Mac and a computer-based graphics package in conjunction with commercially sourced dry transfers or ‘rubdowns’. The method has similarities with the original and it works well, although I have yet to persuade myself that it matches the beautiful, crisp result obtained on photographic paper.

There are various software options. I use Adobe Illustrator on my Apple Mac. I have never really mastered the programme, which I personally find cumbersome and counter intuitive, yet it is very powerful and this job barely scratches the surface of its capabilities. With decent references of the original instrument, ‘Illustrator’ enables you to ‘draw’ on your computer screen an accurate copy that can be saved in an appropriate file format and sent via email to a commercial studio for making into rubdowns.

I do not intend to describe here the workings of the graphics package, except to say that some knowledge of ‘layers’ is helpful so that references can be scanned onto the computer and the artwork traced over them. An understanding of how to source and manage large numbers of typefaces on the PC or Mac is also important if the typography of the original designs is to be matched closely.

Production involves two stages: firstly, I create each instrument in ‘Illustrator’ as and save it as a named ‘ai’ file. On completion the entire set is assembled together (like stamps in an album) as part of a separate ‘QuarkXPress’ document, which represents the rubdown sheet. It is important to remember that the final circumference of each dial face must be adjusted to scale to the rebate machined into the bezel and not to the observable circumference.  The computer programme enables you to work large and scale down to finished size on completion. To guard against mishap it is important that three or four duplicated examples of each element are included on the rubdown sheet, but this is no impediment because you can get an awful lot on an A5 sheet!

Clearly, with the numerous computer graphics packages available, there are alternative ways to achieve the same result. This is the pathway that suits me, since it is the one I know.  Suffice it to say that I created two sets of rubdowns for my Spitfire instruments: the dial faces themselves in grey-black and the needles in off-white (technically described as Pantone ‘Cool grey’). I avoid specifying pure black or white, because the effect is far too harsh.

More about instrument faces can be found in my ‘Aired and Shared’ section. 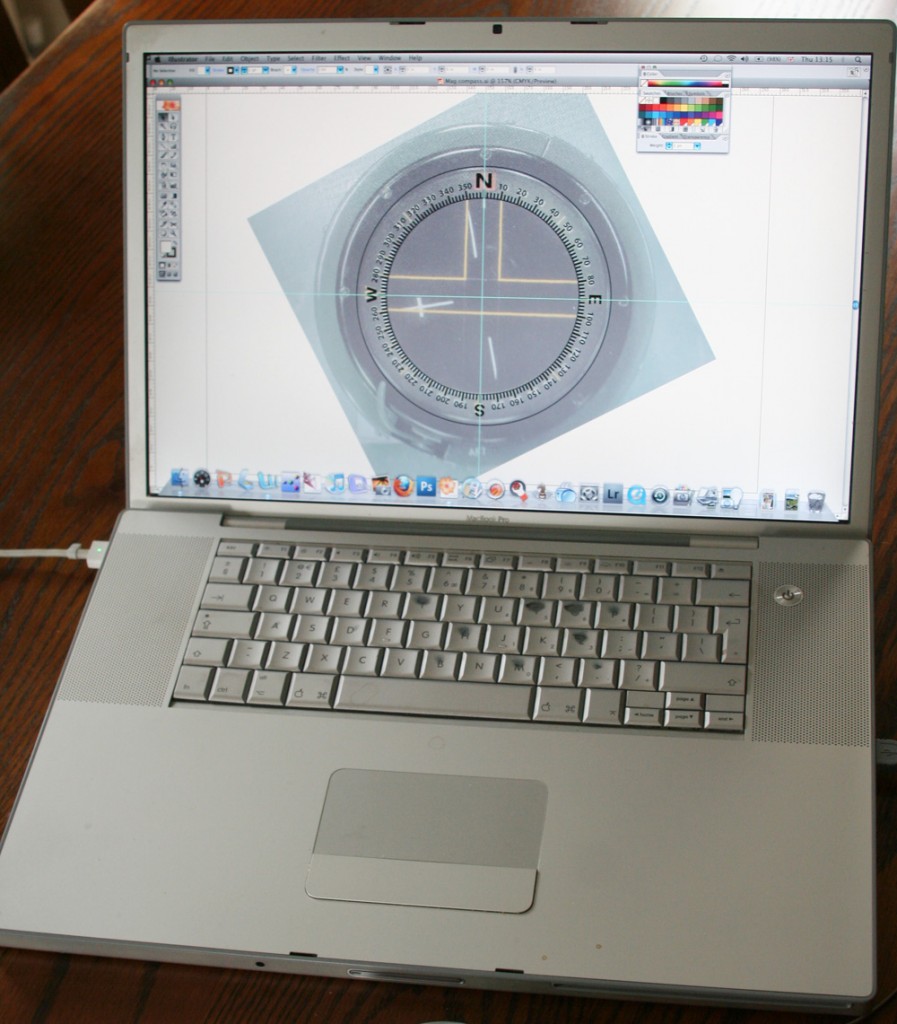 The first step is to scan a good reference and import it as a layer on screen over which to 'trace' the art work using the graphics package. This is not essential but it can be a great aid to accuracy. 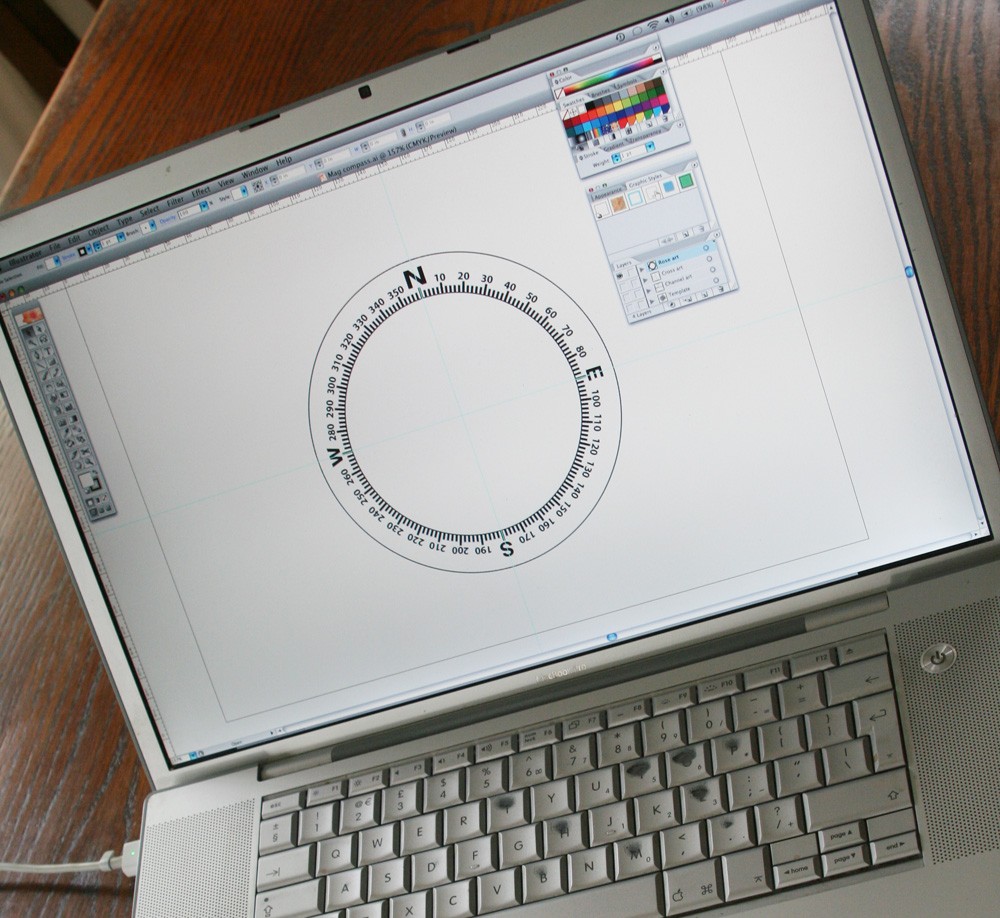 In this example the near-completed graphic is for the magnetic compass. The art work has been drawn at an enlargement of five or ten times and it can be reduced to model size on completion. The software package also allows an image drawn as 'black on white' to be reversed as 'white on black' as needed for the finished piece. 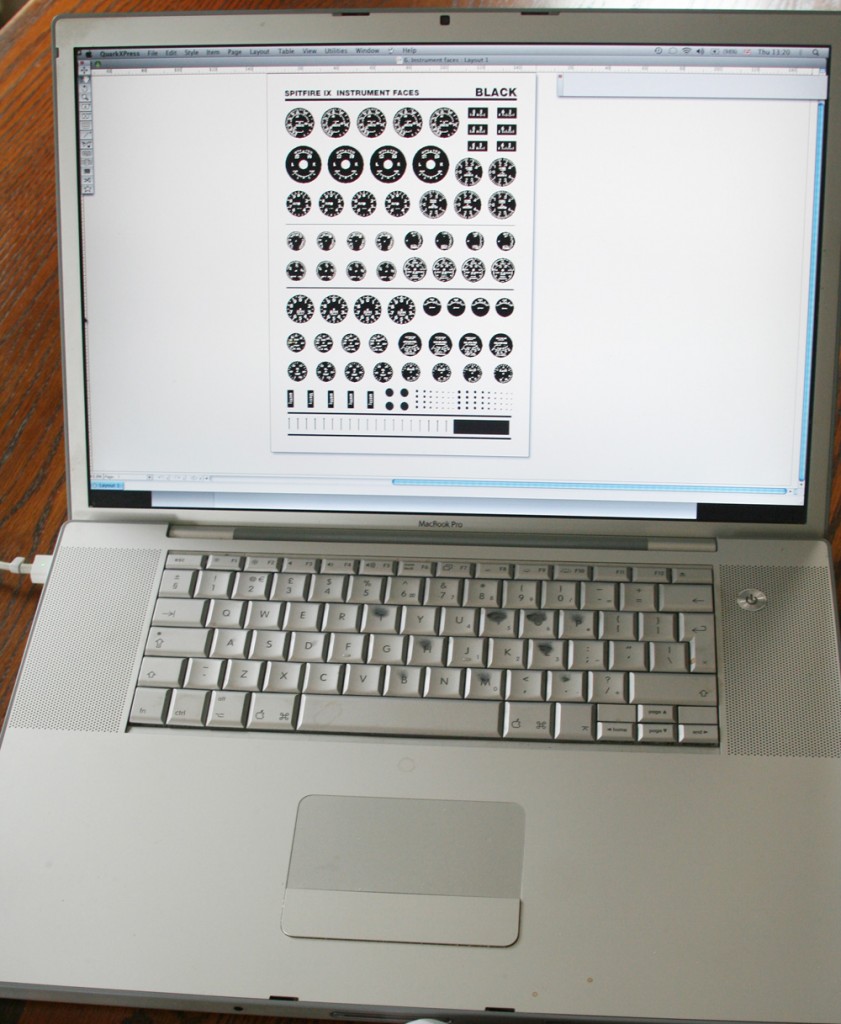 Here the elements of an A5 rubdown sheet have been assembled in a computer design package called QuarkXPress. Once the final workpiece has been proofed and checked the file is converted to a pdf and sent by email to the graphics studio. 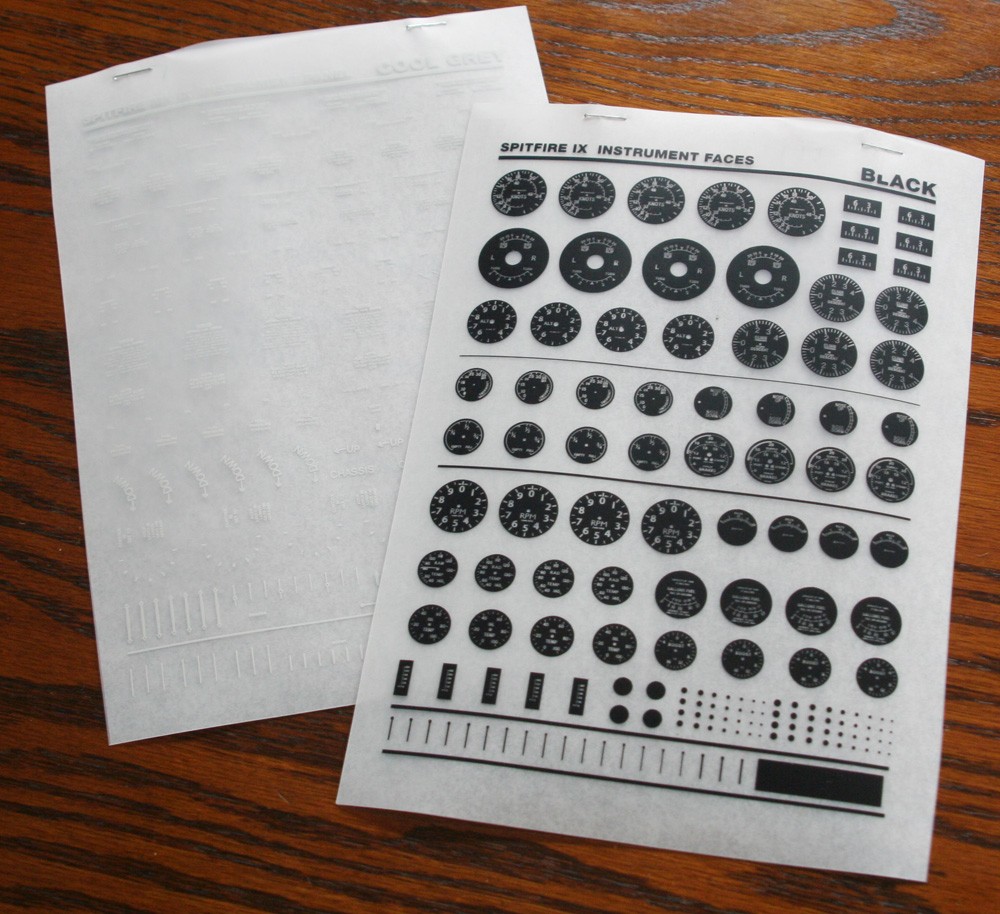 This is what comes back through the letterbox, a sheet of beautiful dial faces and their accompanying needles arranged on a separate sheet. These dry transfers can be produced in an almost limitless range of colours, and it is also possible to have two or more colours rendered on the same sheet, although the cost is greater.