Top cowl and a major setback

Sometime jobs go wrong, and sometimes they go badly wrong!  Ever since finishing the ply-balsa fuselage core in 2013 I had pondered alternative ways to model the cowlings, ways that did not involve litho plate. The problem, of course, is the perennial one of compound curvatures, which in the swelling lines atop the Mk IX’s Merlin engine are particularly pronounced. Consequently I searched for alternative solutions, from GRP to casting the entire top cowl assembly in resin.

But my recent unexpected success in ‘panel beating’ made me reconsider. Could I do the same with the more challenging top cowl? I decided to give it a try and spent a day working away at the short section immediately behind the spinner, which at model scale extends back no further than three to four inches.

The first attempt failed, but by day-two, I had a rather nice piece, which looked and felt snug when emplaced on the model. Even so, I decided on the expedient of using two-part epoxy resin rather than my customary contact adhesive.

The reason for this lies in the profoundly different approach to shaping the metal. Hitherto I had formed litho plate panels by impressing annealed metal directly down onto the wooden airframe, which acts as a pattern. At the end of the process the wood-metal contact is generally good. Now, however, I was working the metal by beating and massaging it from the reverse side, and remotely from the model. The end product might appear spot on yet conceal hidden areas of imperfect contact, and therefore be prone to inadvertent dimpling. Anticipating this, I reasoned that thickly applied epoxy adhesive should provide a ‘ductile’ buffer layer which, when cured, should counter any tendency to dimple. In the event the first gluing operation bore this out.

Next day I began on the main top cowl section, a much more challenging prospect. The panel beating went well, even to cutting out from the softened metal the two small inspection covers and the cigar shaped gash for the air compressor vent.

I took my time and every possible care; if ever there was a job in which I concentrated all my efforts and attention it was this. It took a further two full days of work until I dared believe that I had achieved my sought after result.  Now only the gluing stage remained and I went through the preamble with bated breath. On with the glue, check for exact position (slightly oversize all round for trimming back later) plenty of masking tape to anchor things down, and wait the hour for the resin to harden.  On a scale of 10, I allowed myself 9.5; I was very well pleased.

My troubles began a couple of days later when I spotted a slight dent. I explored it gently and made another, shallow but noticeable, and then another. My fears of unseen gapping between the soft metal and underlying wood had indeed been born out, and I had applied insufficient two-part epoxy to fill them. I slept poorly that night.

Next morning, gripped with a reckless kill or cure resolve, I took up my still beautifully skinned top cowl and probed its surface unrestrainedly. Perhaps 10-15 per cent by area of the soft metal yielded beneath my thumbs, and I photographed the result as perhaps I knew all along it would! An unmitigated disaster!!

What to do? How to save the mess, if only as a master for mould making?  It seemed I had no other option than to attempt to salvage things with car body filler, and I took a picture of the repair.

Yet even now my troubles were not over: I had made the inspection doors too snug and I had abutted the forward and main panels too tightly together. Panel lines that had looked fine in bare metal began to meld together under several coats of grey primer.

As I write, I have gone on to complete most of the fine detail work on the top cowl (see next diary entry) and have it fitted temporarily to the model. I have spent time painstakingly redefining and sharpening its panel lies with a scalpel blade tip and scriber. The result is passable. The fit relative to the side cowling panels is good but not perfect, not least because of the conventional repair strips I felt obliged to ad.

But is the overall job within acceptable limits?  I’m undecided!  Should I revert to plan A, and make a casting in preparation for a second, very different attempt?  The jury is still out! 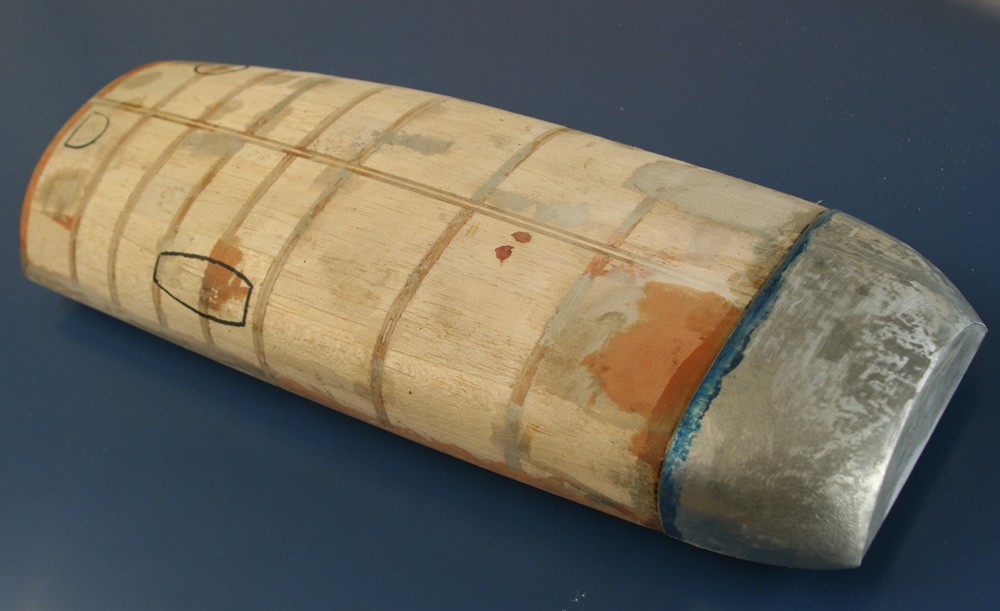 The first stage of skinning to top cowl went well, probably because of the relatively small size of the panel, which made it a lot easier to form and fit. The mottled appearance is nothing to worry about, because so long as the litho plate is glued firmly and evenly to the substrate any minor blemishes can be removed with abrasive paper. 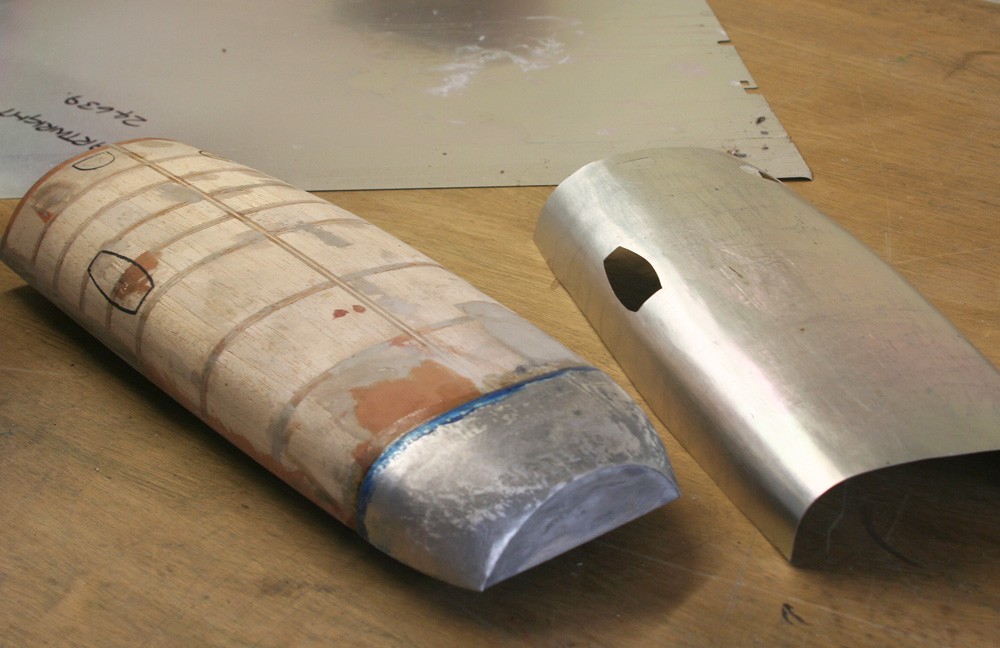 Now the main panel is nearing completion and when offered up to the wooden core it appeared to fit accurately and snugly. 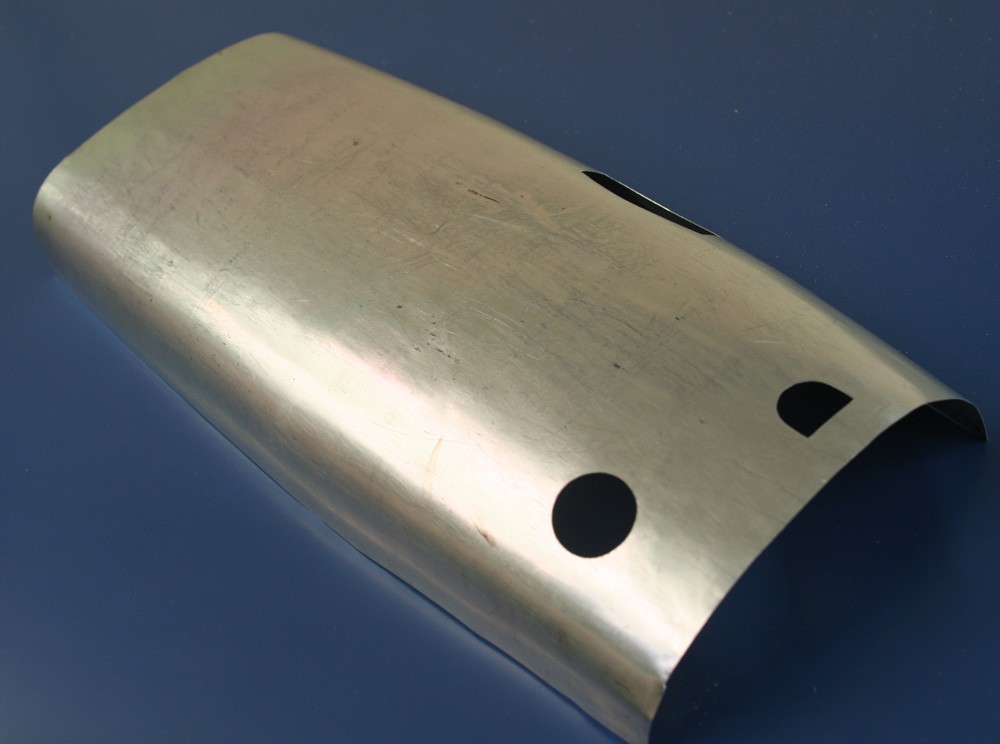 Proof that it is possible with care to cut neat openings into very soft annealed litho plate. 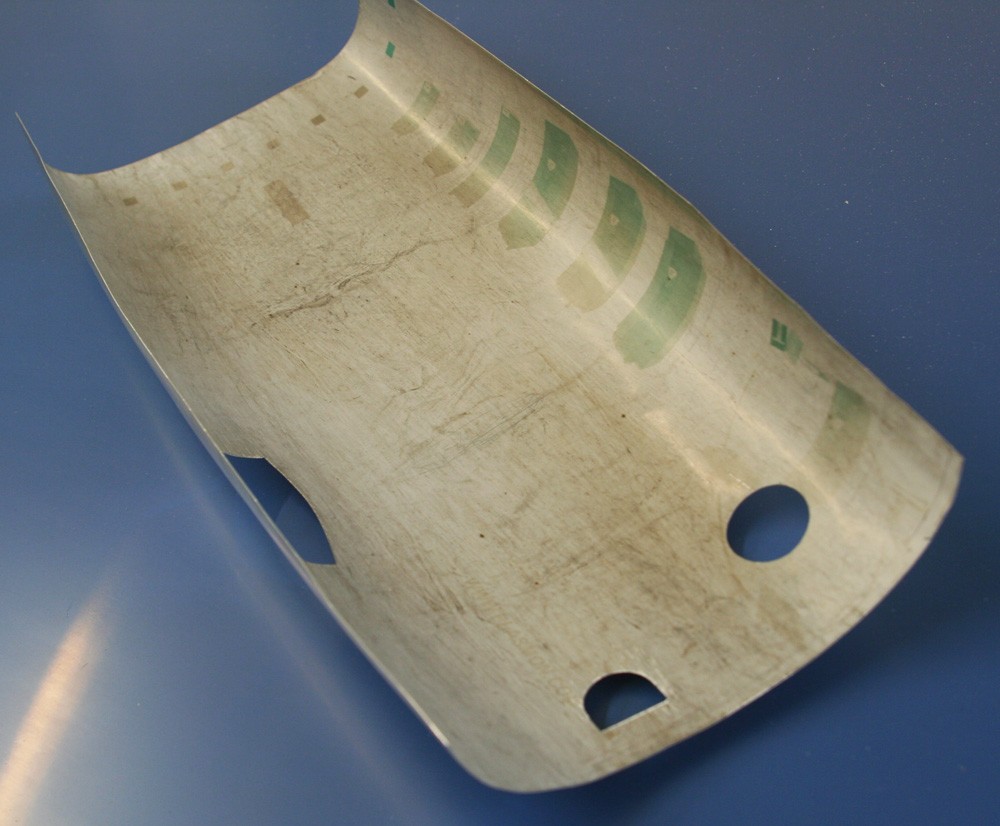 The panel was formed by beating and burnishing the soft metal from the underside, which it why it is hard to judge when and if perfect metal wood contact has been achieved. 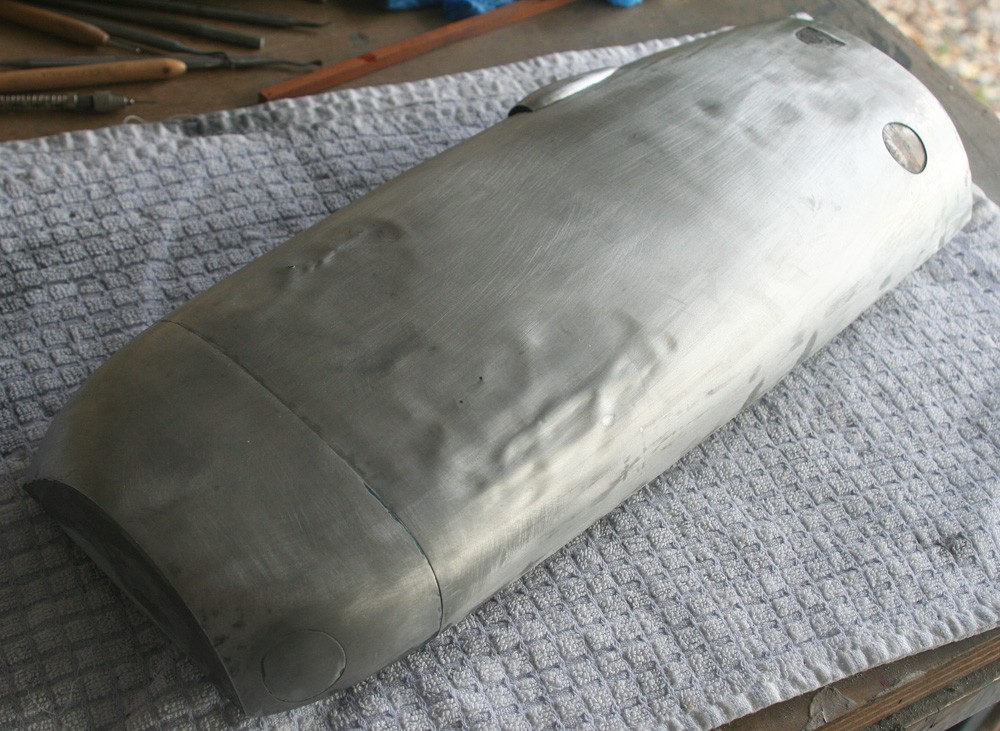 What happened when the integrity of the fit and the glue bond beneath the cowl panel was 'tested to destruction'... an unmitigated disaster! 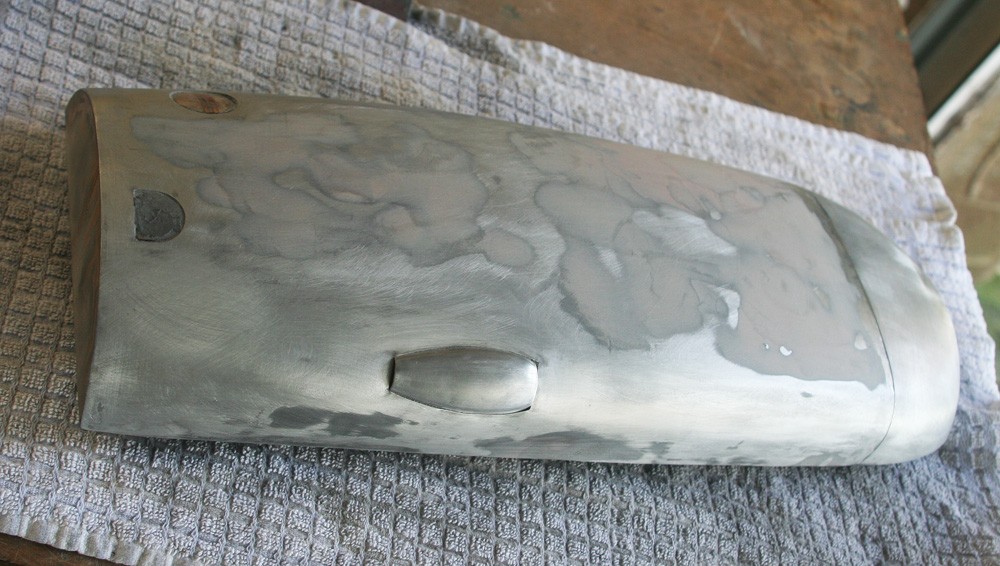 Emergency repairs with car body filler look encouraging. The skin layer is now stable and unlikely to buckle or dimple further. But all hopes of showing it in bare metal have faded: Whatever happens now the top cowl will have to be painted, just as it is in my earlier Mk I Spitfire model. 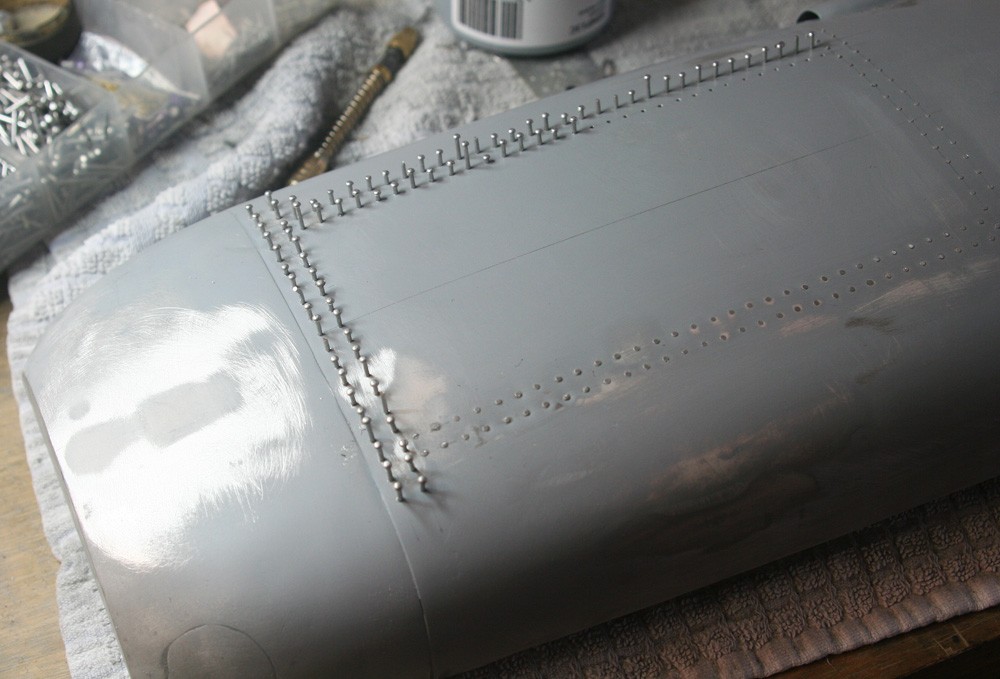 A start on the riveting. I have more to say about the detailing stage of this difficult and challenging part of the model in my next diary entry.