Fuselage Frames 7 to 12 are all prominent within the Spitfire’s cockpit, so they needed to be uncompromisingly accurate. However, they also had to double both as exterior fuselage formers and as landings for composite balsa wood and styrene structural panels that would enclose the cockpit area. The only practicable solution I could think of was to make them from three laminated plywood layers – the middle being cut to full exterior fuselage dimensions and the two flanking layers reduced by a nominal amount (skin thickness) so as to create shoulder rebates either side. Finally, the entire piece would be laminated with styrene sheet and detailed in replication of the original. The trick was choosing materials of a thickness such that the three layers summed together equalled the frame thickness, minus an allowance for the styrene. For the heavier double frames, this solution appeared robust; less so for the narrower frames, particularly Frame 9.

If this sounds confusing, I hope the pictures make things reasonably clear. They show how, until the composite skin could be installed, the entire assembly was held in situ on the upper and lower longerons and by the artifice of a shallow four-ply ‘stringer’ at the bottom of the fuselage, a relic of the longitudinal web of ply over which the entire fuselage structure is built. I chose high quality mahogany square section for the longerons, which, like the frames themselves, were laminated with styrene sheet of sufficient thickness to allow for corner radii where specified and secured fore and aft by small wood screws reinforced by two-part epoxy glue.

The biggest challenge in the detail was the many lightening holes that characterise most of the individual frames. Clearly, these were cut in the styrene skin but the underlying ply also had to be cut out and by a greater diameter to make the piece look convincing.

While all the main features of Frames 8 to 11 are given in the Monforton drawings, I was fortunate enough to have what appears to be the Supermarine GAs, as published in the book, Dutch Spitfires, by Theo Melchers. Used in combination with photographs, these were invaluable when adding the finer detail made up from sundry styrene and litho plate parts. 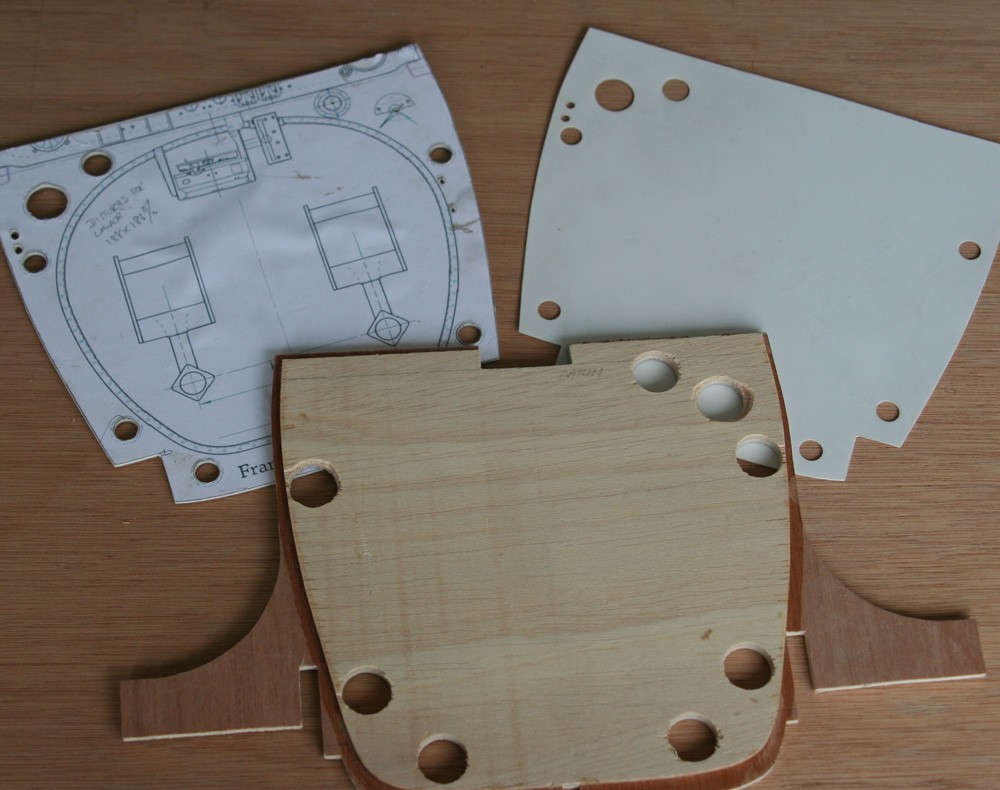 The basic elements of the visible fuselage frame set are exemplified here by Frame 8, photographed during the early stages of construction. The three plywood layers have been glued together and the lightening holes opend out. The styrene top skin is seen ready for laminating. Only then is the centre cut away to waste using a jig saw. 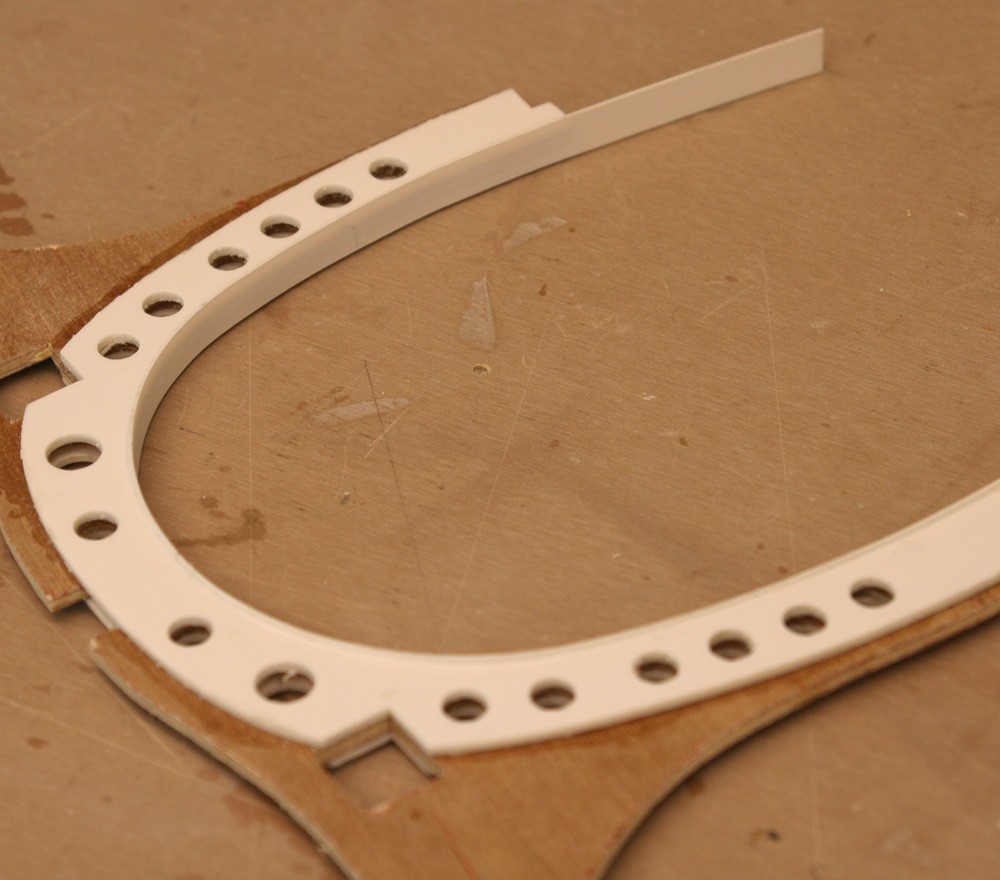 With the centre cut away, an inner lining is applied, as illustrated by this picture of Frame 10 which clearly shows the idea of the rebated landing for the top skin. 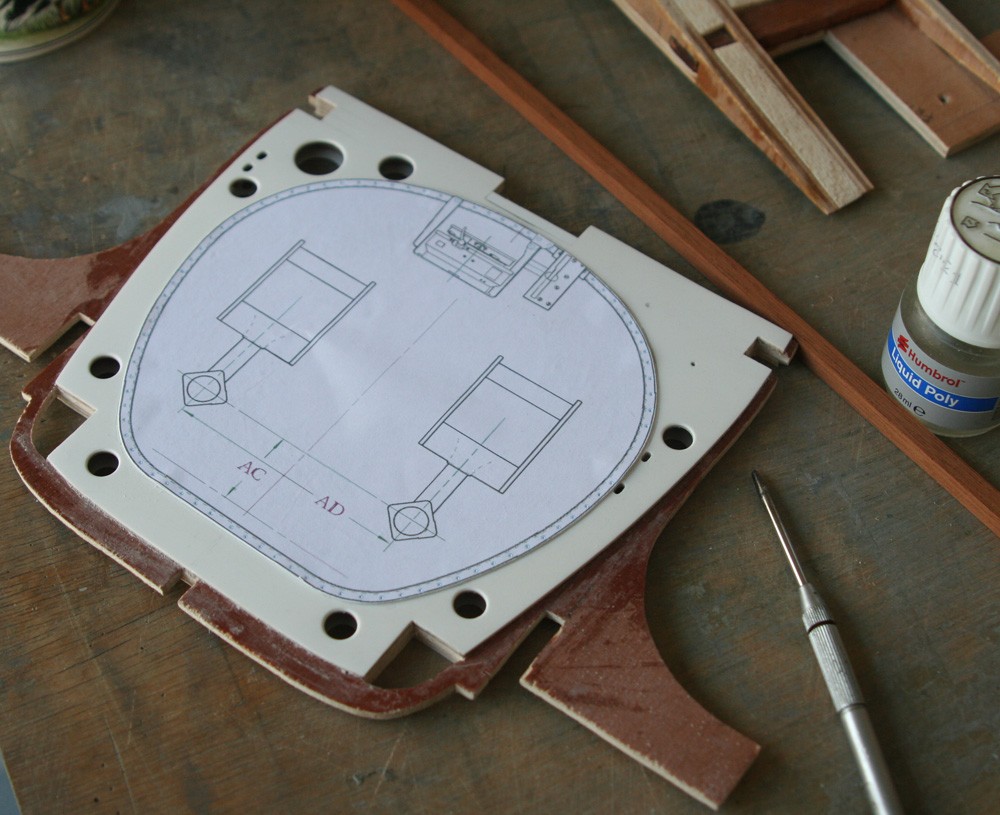 Back to frame 8 and part of the drawing is pasted on in order to mark where the turned lip of the inner skin overlaps. This will be cut and applied as a separate styrene piece. 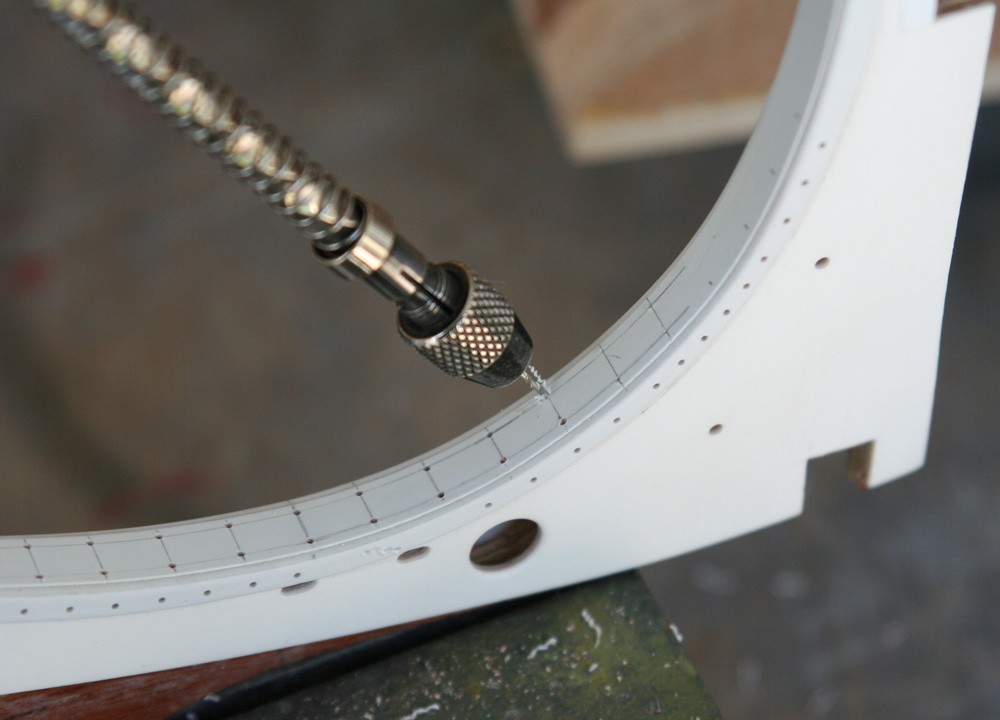 Holes are drilled for the rivet detail... 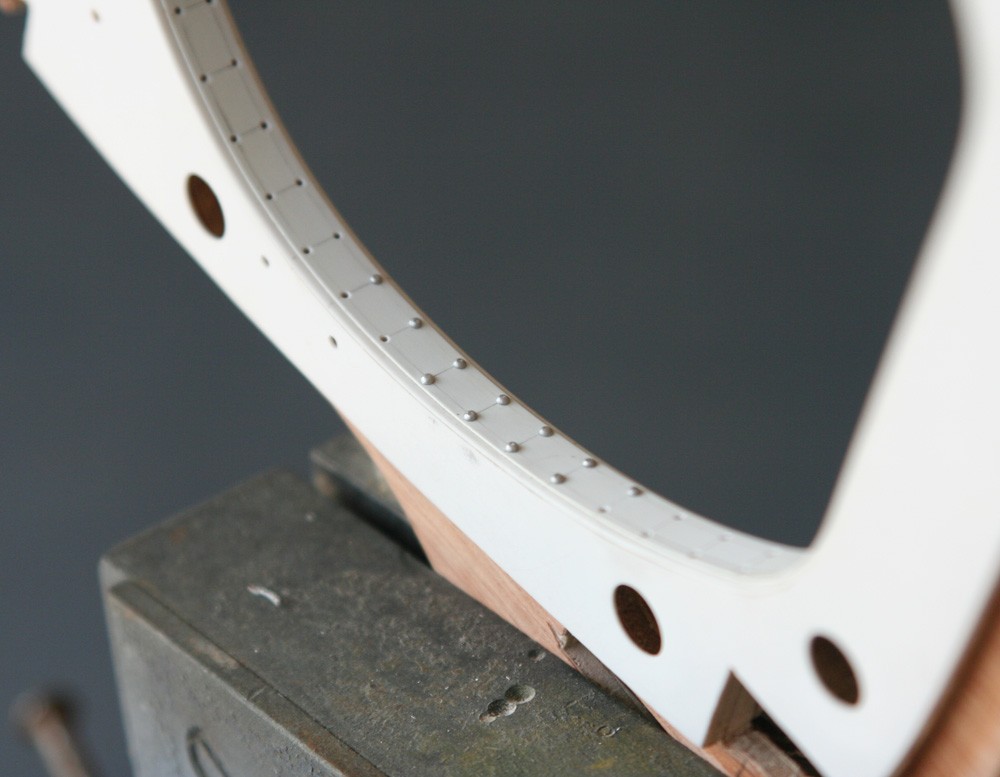 ..and tiny snap-head alloy rivets are emplaced in the push-fit holes. 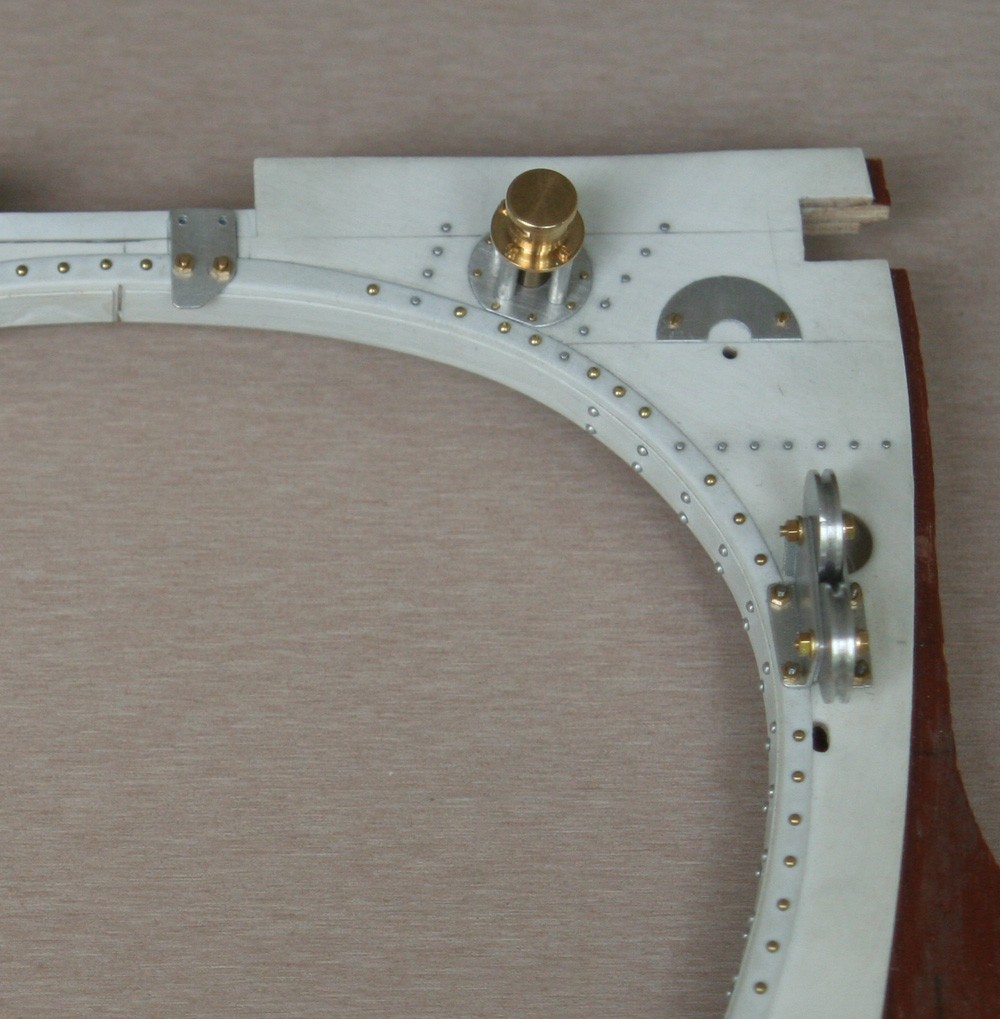 More prominet elements were also made at this stage, when they could be safely dry fitted. 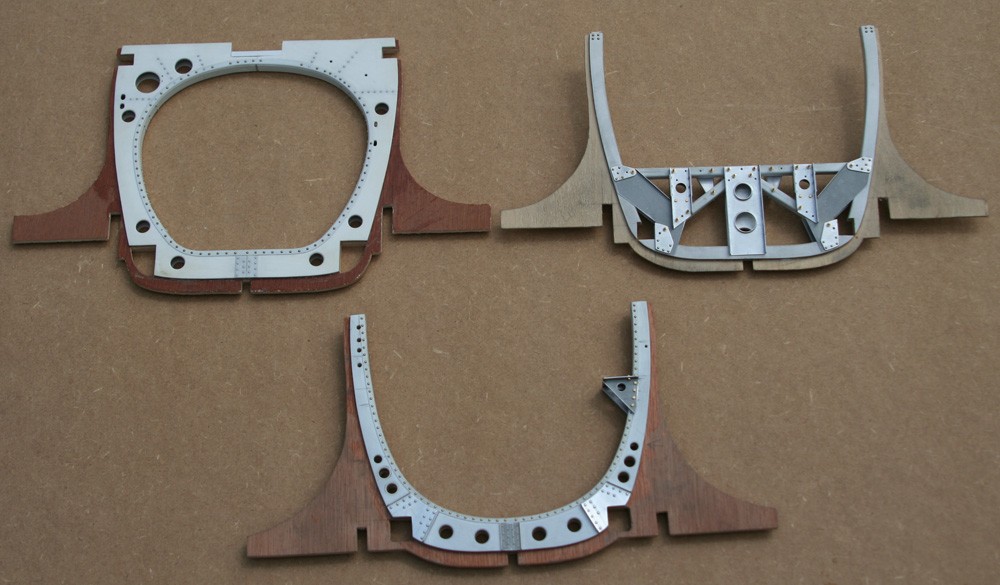 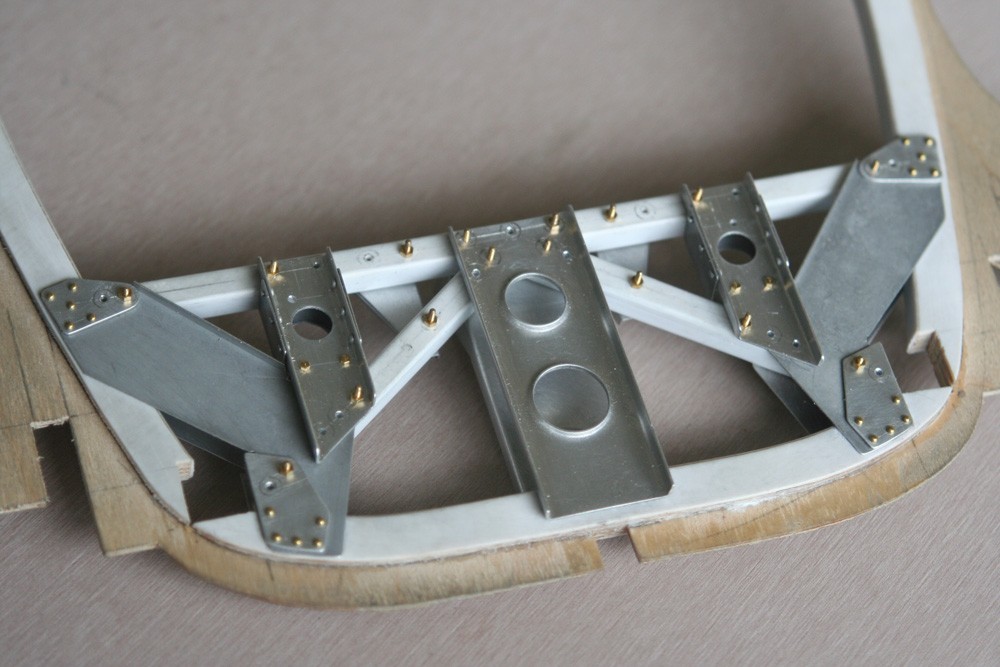 Close up of some of the litho-plate detail added to Frame 9. Note the bolt heads represented by 14 and 16 BA brass hexagon sets. 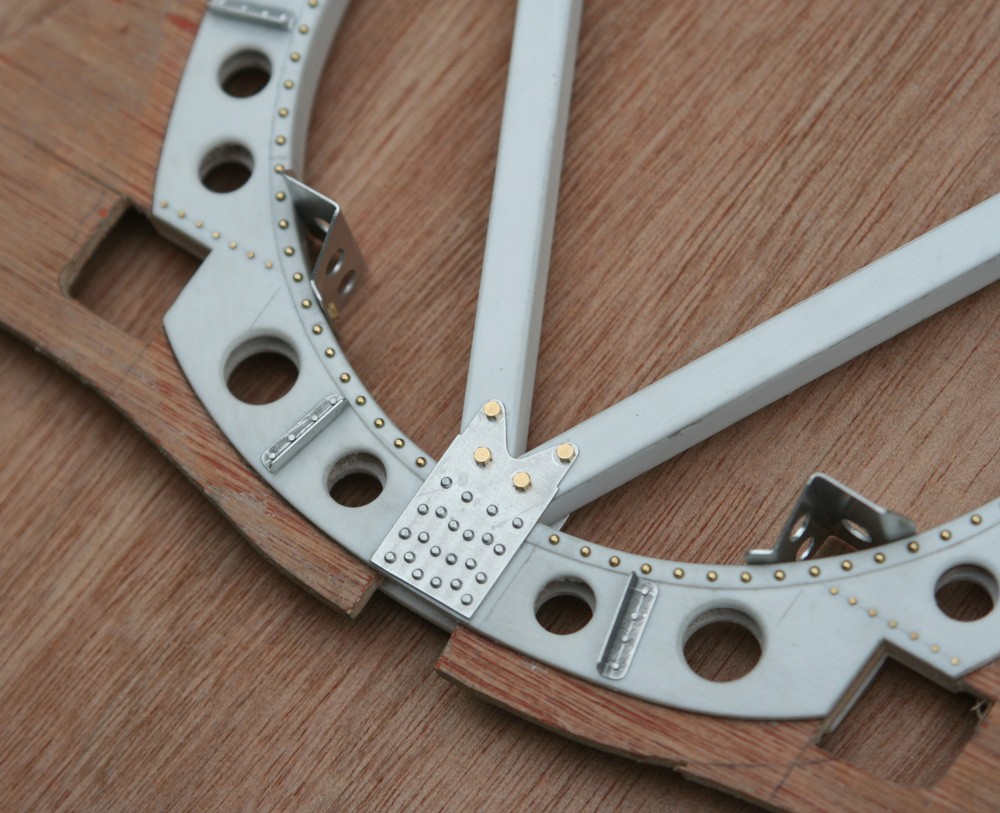 More detail, this time showing part of Frame 11. This is one of only two full frames that are visible, but it was made in two halves, the upper put aside for a later stage. 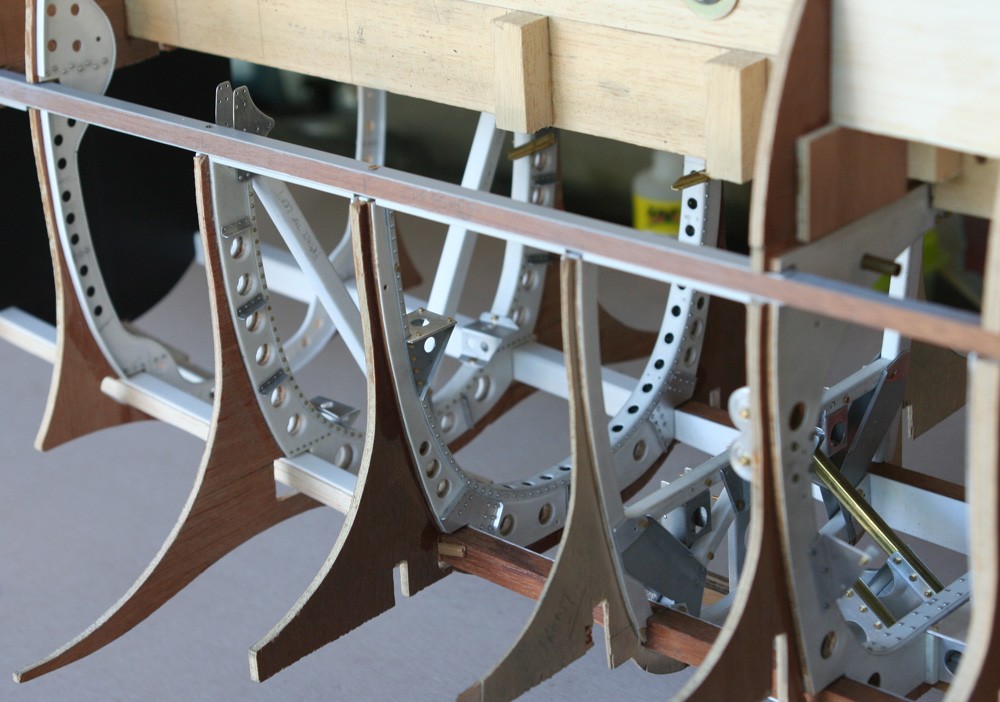 The full set of frames in situ. Not the lower longeron has been only partially laminated at this stage. The belly stringer is only just visible between Frames 7 and 8.