As April rolled on into May, I set about the task of cladding the stern section of my Spitfire. The work took a couple of days and began on the lathe with the turning of the small cup-shaped jacking pad located just forward of the tail wheel strut. I routed out a cavity in the underlying plywood member and glued the fitting it into place with cyanoacrylate.

The combination of small skin panels and access plates that characterises this part of the airframe required little or no annealing to achieve the relatively simple curvatures involved, but considerable care was needed to get a clean and even seam line at that all important canted suture between the stern section and main fuselage. Once again, when forming the more tightly curved panels I made them ‘over-tight’ so that on installation they would spring outwards and assume the exact underlying fuselage shape.

A potential complication in this otherwise straightforward sequence is caused by the rudder actuating rod. I approached this with some trepidation, because not only is there the exterior ‘male’ fairing to make but also a similar but smaller ‘female’ counterpart that is riveted to the reverse of the skin, thereby creating a quasi circular duct that angles back into the fuselage.

I began by making the spear-shaped opening in the skin panel blank as indicated on Paul Montforton’s drawings. From there everything came good, because both the male and female fairings proved almost ridiculously easy to make using a technique that I have described before:

I simply transfer the plan view of the ‘blister’ onto a piece of four-ply and then cut it out with a scroll saw, taking care to extend the length of the aperture by an arbitary 10 mm or so. With this simple ‘tool’ gripped in the vice, and using a suitable dome-ended dowel or dowels, it is easy to impress a piece of heat annealed litho plate down into the opening. The secret is to keep working at it until the desired shape is achieved. Then, with the work-piece removed for the final time, the overly long ‘open end’ can be faced up and the flanges cut to shape and drilled. My photograph shows the three pieces prior to riveting together.

The final task before this particular panel could be finalised and fitted was to rout out a channel in the balsa flank of the stern section, and this required the precautionary installation of the rudder to ensure accurate alignment of the actuating rod with the rudder horn.

Rivets: A variation on a theme

Thee concentric rows of very close-spaced flush-head rivets mark the canted union of the Spitfire’s fuselage with its detachable stern section. Unsurprisingly, these rivets took a considerable time to pitch out on the model, drill and emplace. But more to the point, it was clear that – given their density – my tried and tested procedure of sanding down the closely packed clipped off shanks might prove impractical, or even result in damage to the delicate skin. So I experimented with a modified approach: Rather than emplace each rivet and then cut it flush, I removed the rivet head first, then inserted the shank, cut end downwards, with the customary dab of cyanoacrylate glue. But before the glue had a chance to grab, and with a small flat ended punch, I gently but firmly pushed the factory-finished square end of the rivet down flush with the skin, thereby alleviating any need for sanding. I believe the result to be convincing, as I hope my picture shows. And if anything, the slight irregularity achieved enhances the overall effect. 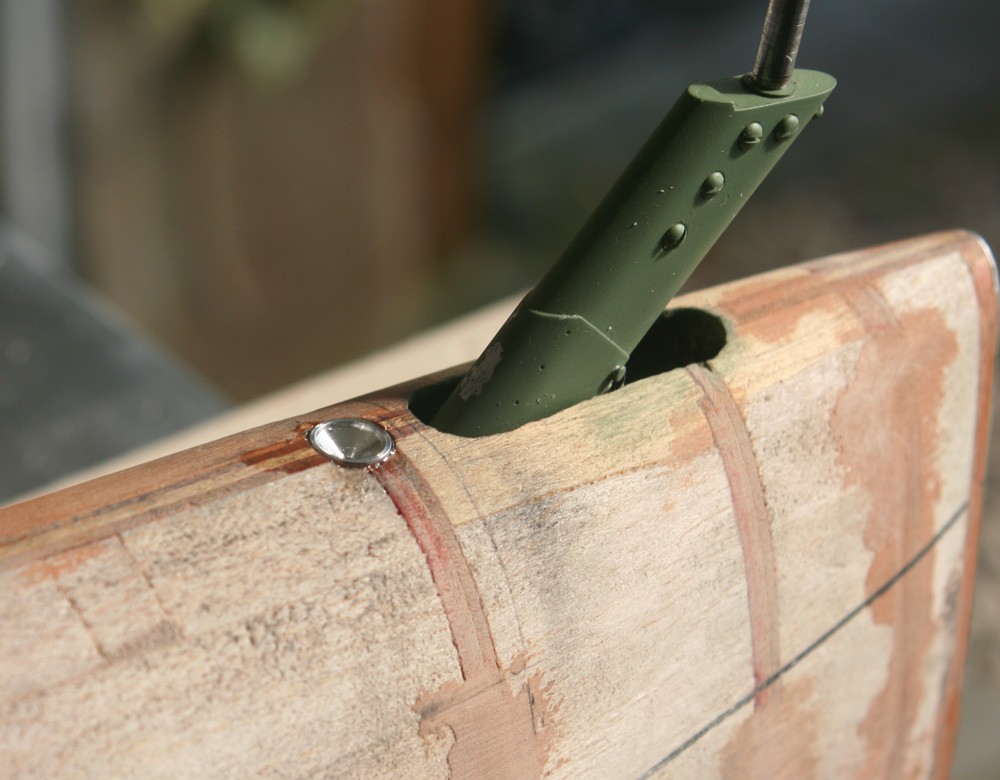 The little jacking pad was turned on the lathe from alloy bar. 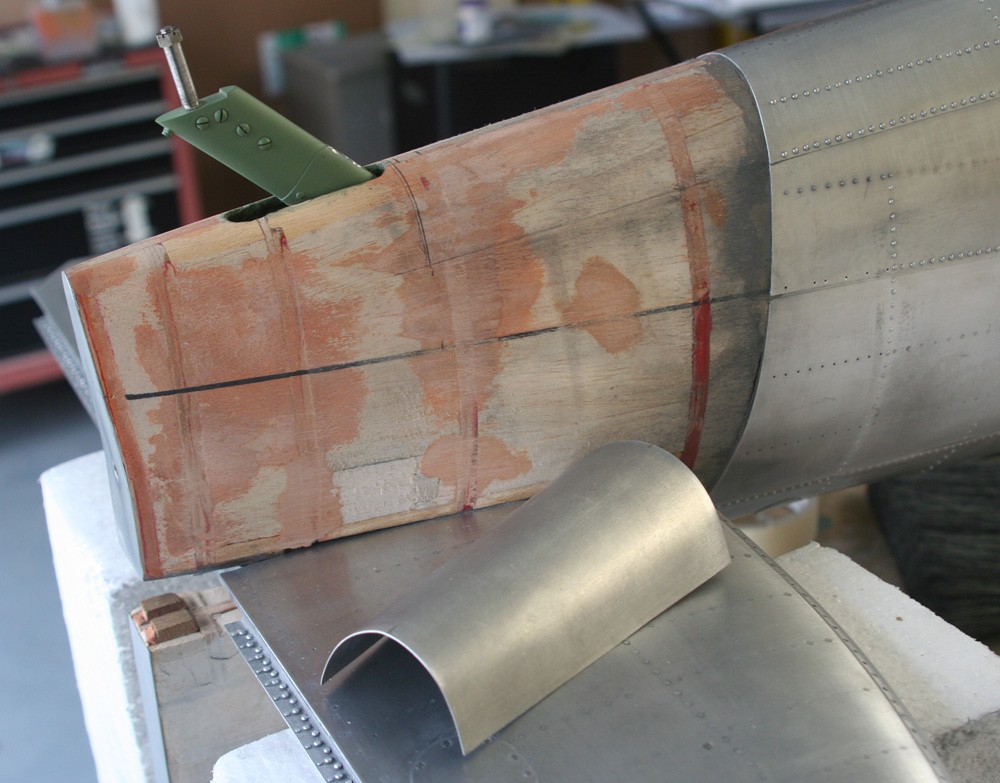 The first skin plate ready to install. As with the rest of the fuselage, a strict sequence had to be followed to achieve the correct overlap pattern. The hole in the pre-formed plate for the jacking point has yet to be made. Note the small balsa plug filling the gap left for the fin bolts. 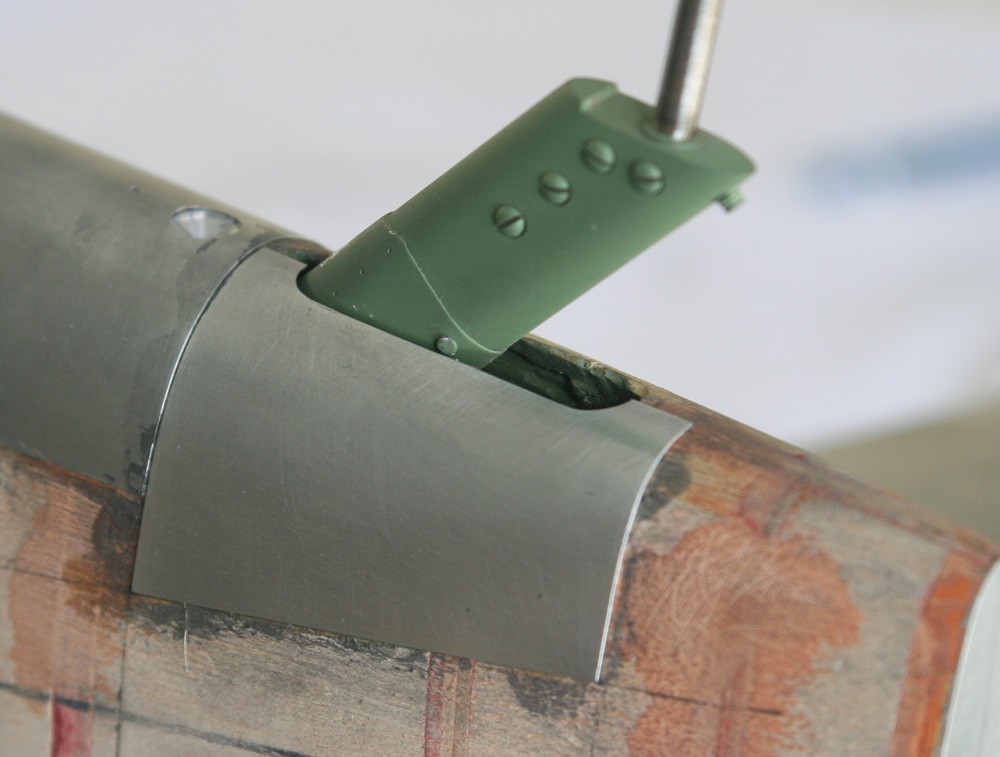 Next come the two detachable covers around the tail wheel strut. They feature prominent screw fasteners which have still to be added. 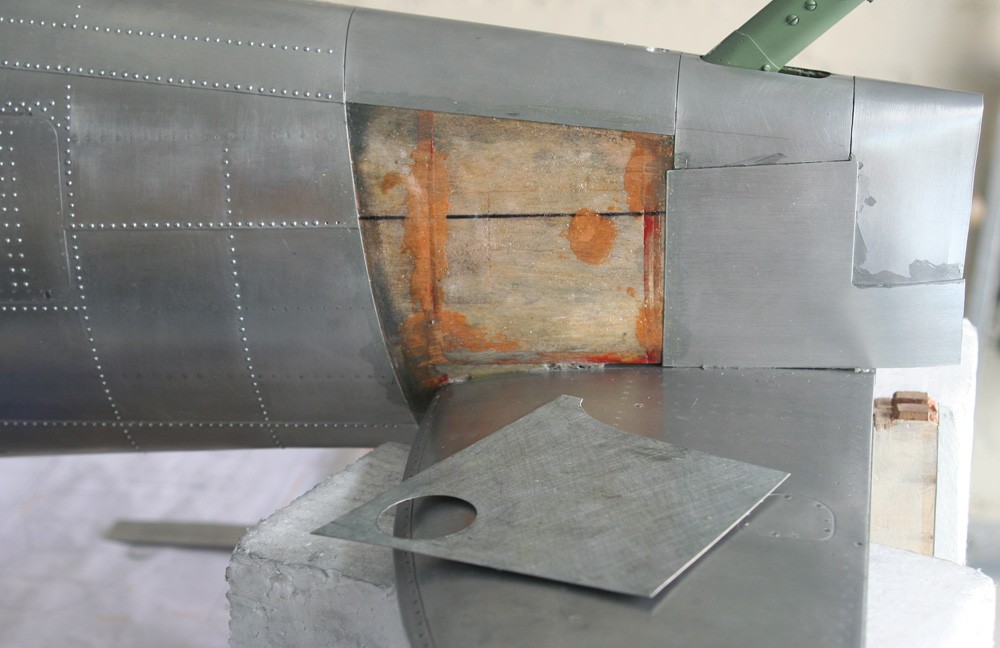 The final panel of the starboard side is ready for gluing in position with Evo-Stik. 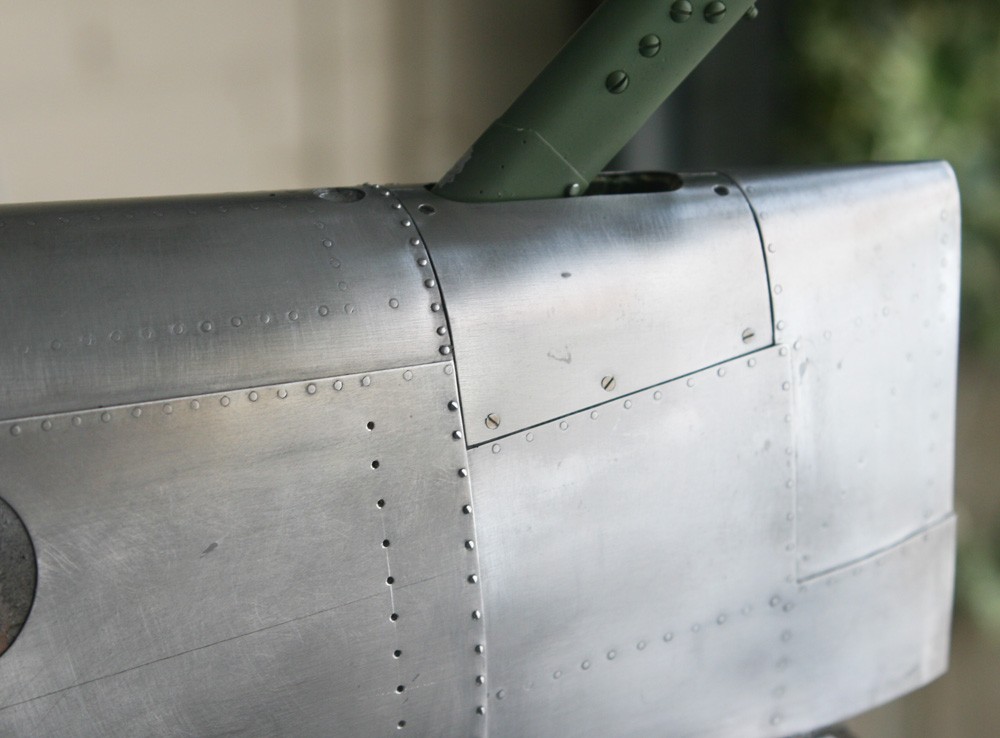 The first screw fasteners are installed. The size of the fasteners used varies considerably from panel to panel. 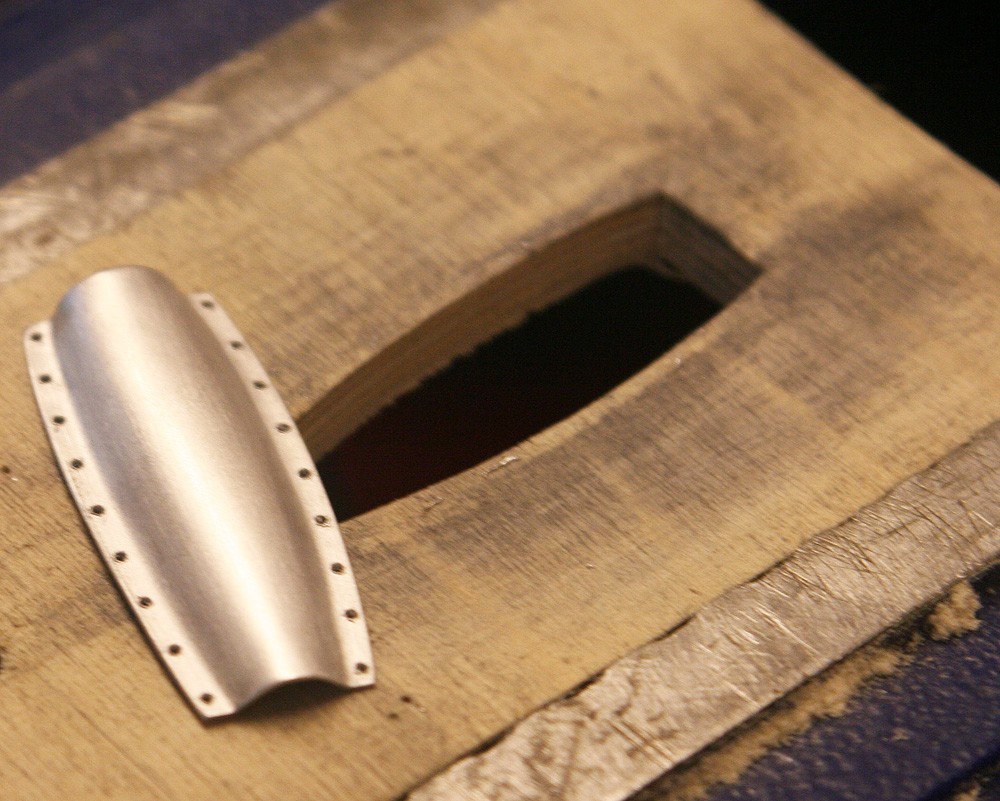 This picture is of a fitting made for one of the engine cowlings, but it illustrates the technique described here to make the parts for the rudder actuator rod fairing and duct. 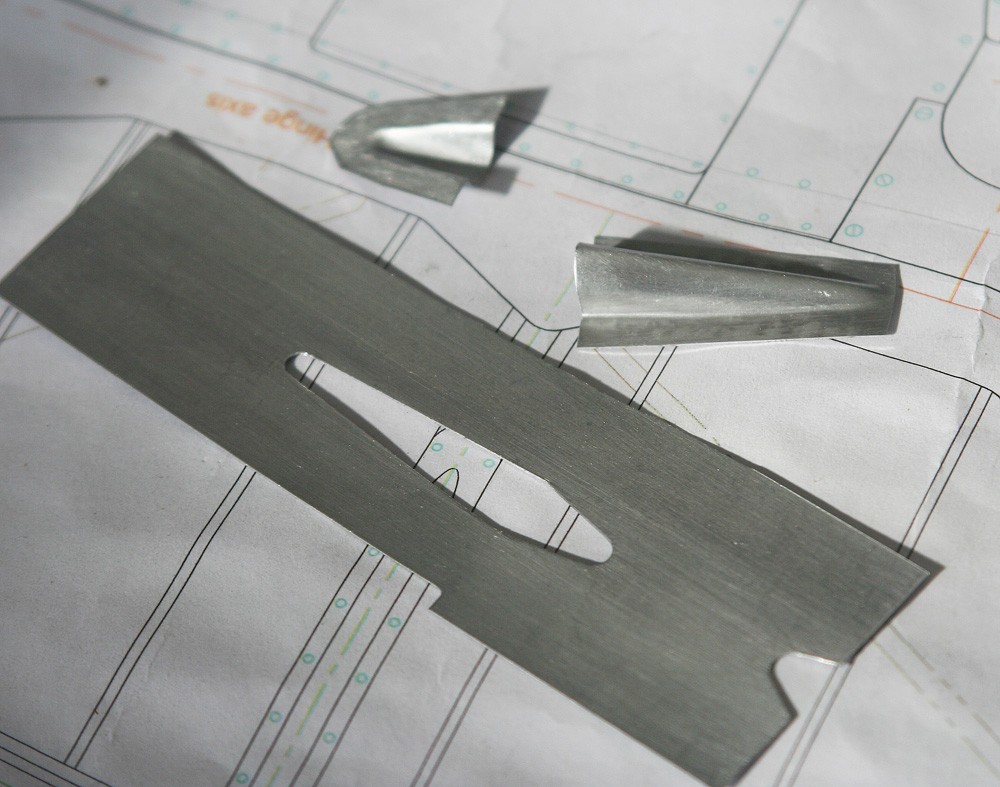 The skin panel prior to assembly... 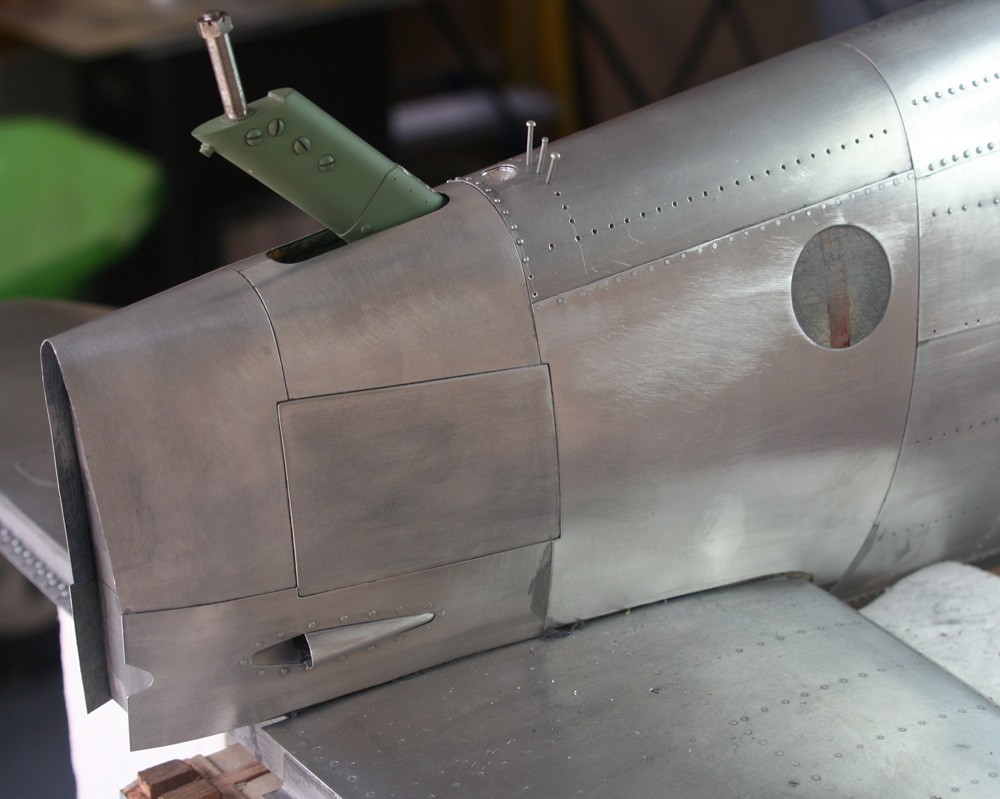 ..and the same panel finished and installed on the model.