A conspicuous feature within the lower fuselage is the substantive sub-assembly supporting rudder pedals, heel boards, control column, aileron cable drum and other less obvious items. Being integral with the main frames, this was the next step since it needed to be completed before either they or the longerons could be finalised in position.

The structure is rooted on two paired beams that run longitudinally about the centreline of the fuselage floor between Fames 7 and 8 and 8 and 9. Various square- or channel-section supports are then added in the vertical horizontal and diagonal planes, effectively creating a raised platform for the heel boards and, notably, the enclosing plate that secures the pintle on which the rudder bars pivot. I built my version as closely as I could to the production drawings, compromising only in minor detail that would be next to invisible in the finished model.

The pictures illustrate the modular approach adopted and materials used, which include sheet styrene in combination with litho plate and various sizes of square- and channel-section brass of the kind available in most model shops. While fabricating the support structure, I also made the heel boards from folded litho plate and machined the various components that make up the rudder bars, including the tricky star-wheels adjusters milled using a three-jaw chuck bolted to the bed of my small rotary table. As the pictures show, the rudder beam is fabricated from litho plate and thicker sheet alloy (0.5 mm) over a core of high-density model board and detailed with snap head rivets.

Even in giant scale, fitting out a model aircraft’s cockpit is a bit like building a ship in a bottle. Only by incorporating (and painting) sub assemblies such as this at a very early stage is it possible to cope in the confined fuselage space, since once the skin goes on it becomes almost impossible to manoeuvre parts onto position, let alone insert and tighten the many tiny nuts and bolts – an example of the ever-present need to think well ahead.

A feature of the lower fuselage support structure is its ubiquitous lightening holes, all of which in the real aircraft have belled-over edges. Where these are barely visible I simply cut holes and left it at that, but for the more conspicuous examples I went the whole way. This is easy in thin gauge aluminium by using a make shift punch and die: The hole is made slightly undersize in the work-piece, and a corresponding hole (oversize by approximately twice the thickness of the material being used) is drilled in a scrap of 1/8 in. or thicker brass or alloy plate. The sharp edges of the die are given a slight chamfer and then, with the work-piece and die aligned and clamped, it takes only a tap with a hammer and tapered punch to create the desired tooled effect. If on the reverse side the impressed edge turns out a little ragged, it can be trued up easily with careful use of a small flat file.

Another detail included at this stage was the Dunlop relay valve, part of the pneumatic system. It is barely visible mounted atop the paired beams just forward of Frame 8, and were it not for its three pipe unions, I may have been tempted to leave it off. Nonetheless, this simple cube-like ancillary was easy to mill out of solid alloy, using photographs as reference, and turning and drilling the triple unions from 10BA hexagon brass took no more than an hour or so. After all, when comes the time to install it, the plumbing will have to start and finish somewhere! 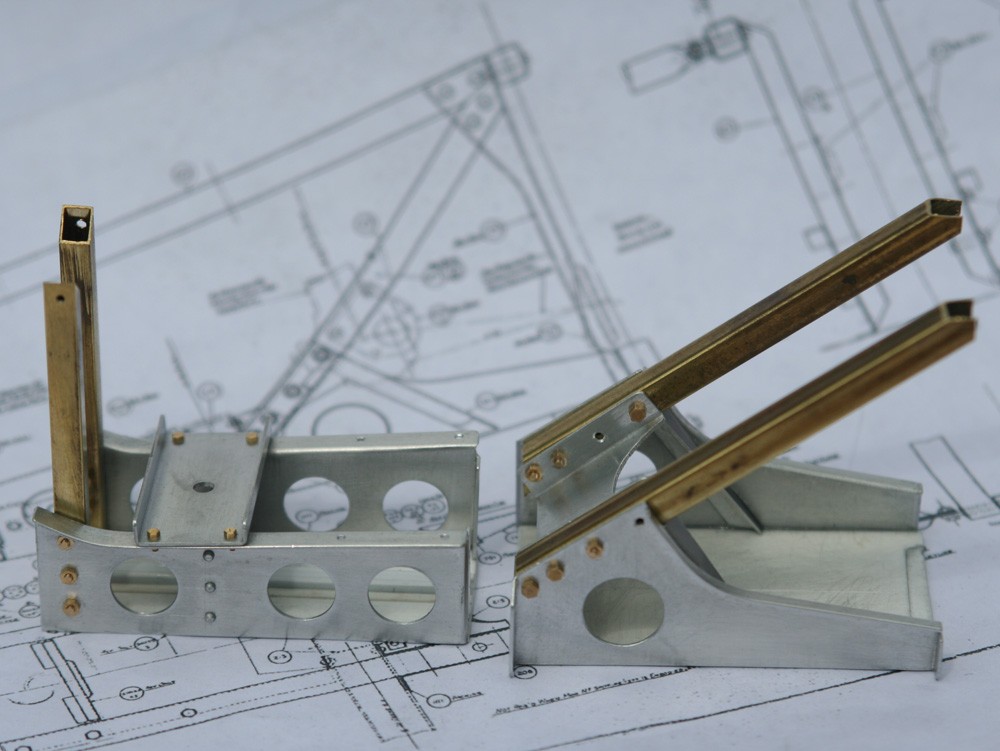 Early stages showing the two paired beams and the drawing from which they were built. 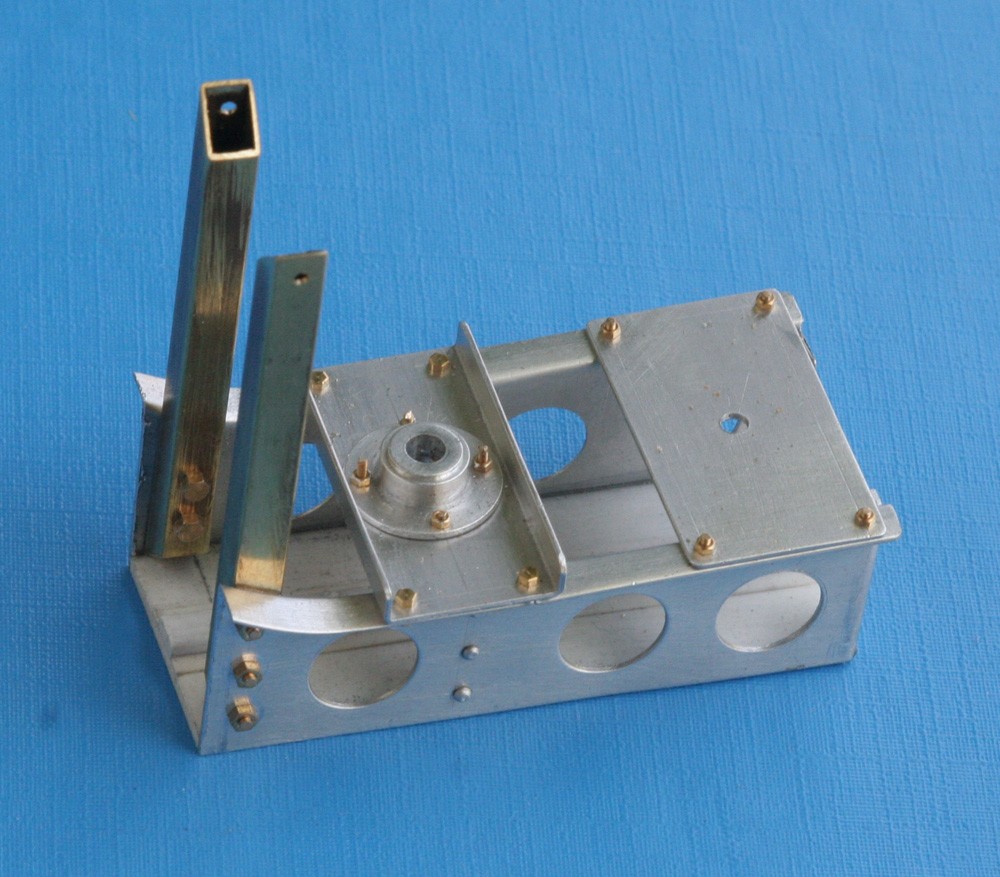 The foremost of the two assemblies at a slightly later stage. The turned boss houses the lower end of the rudder bar pintle. 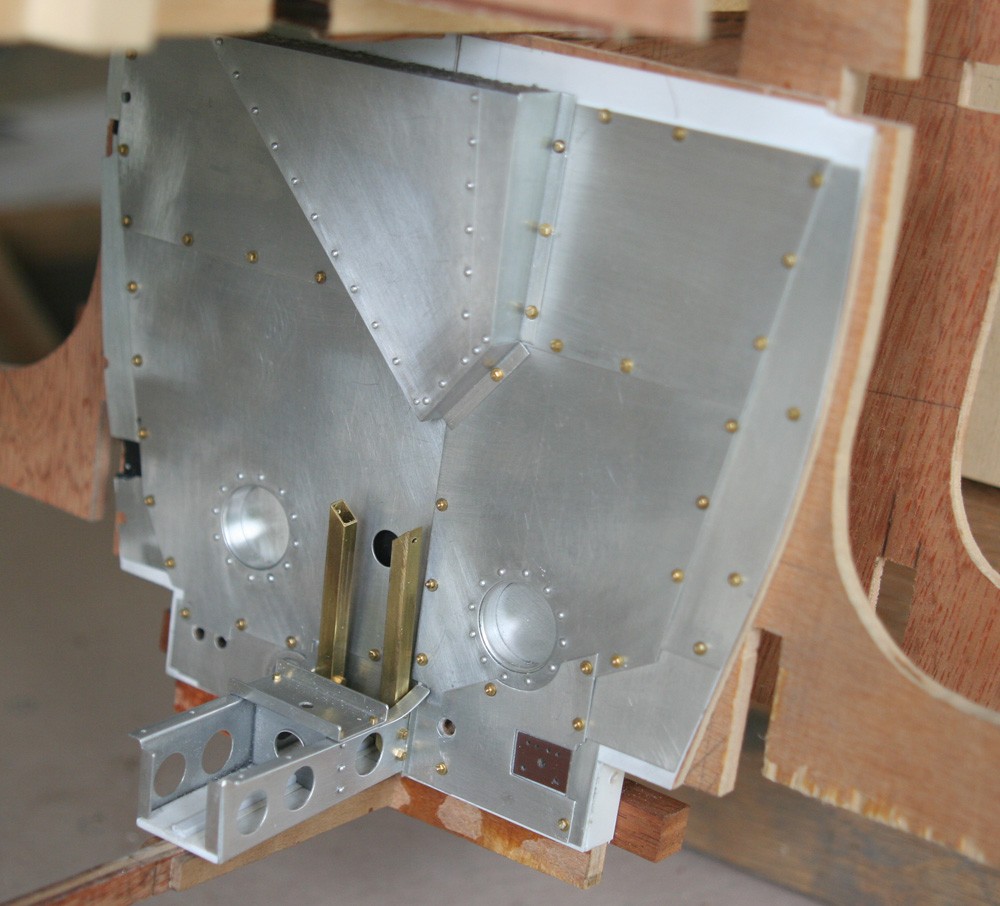 Test fitting against the fire protection bulkhead. In the real aircraft the beams continue just slightly beyond this to where they bolt to Frame 7. 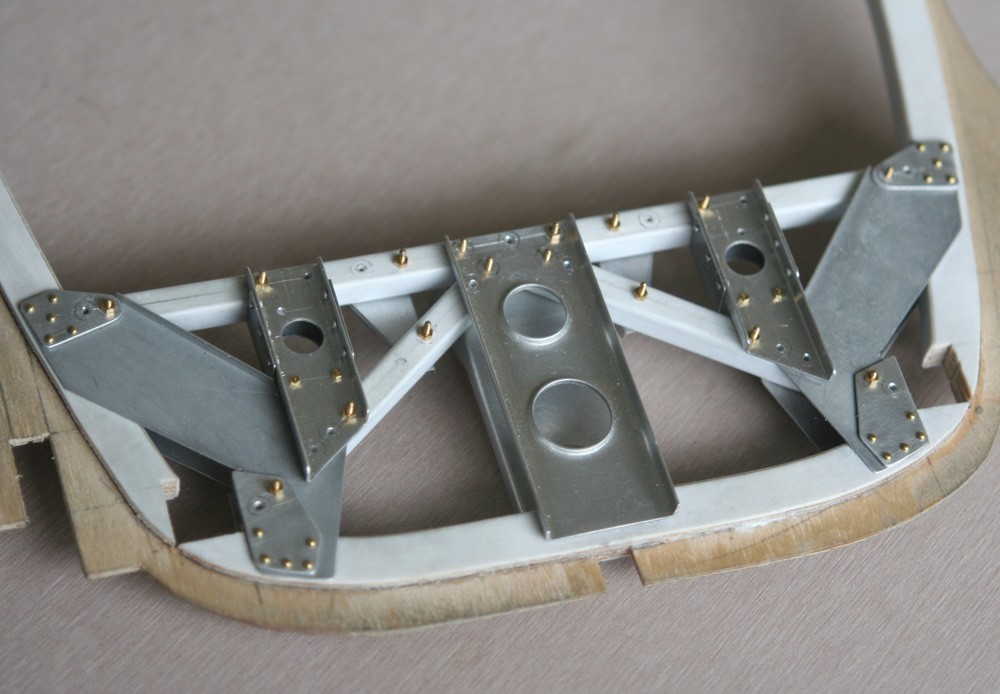 Associated detail being added to Frame 9. Note again the combination of different materials. 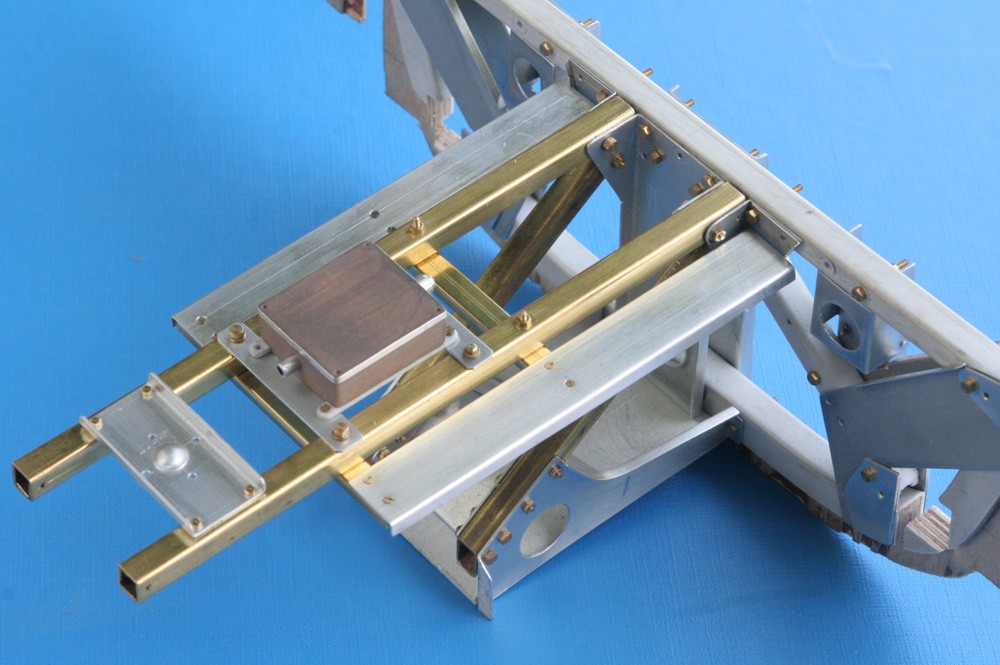 The heelboard assembly is test fitted to Frame 9. 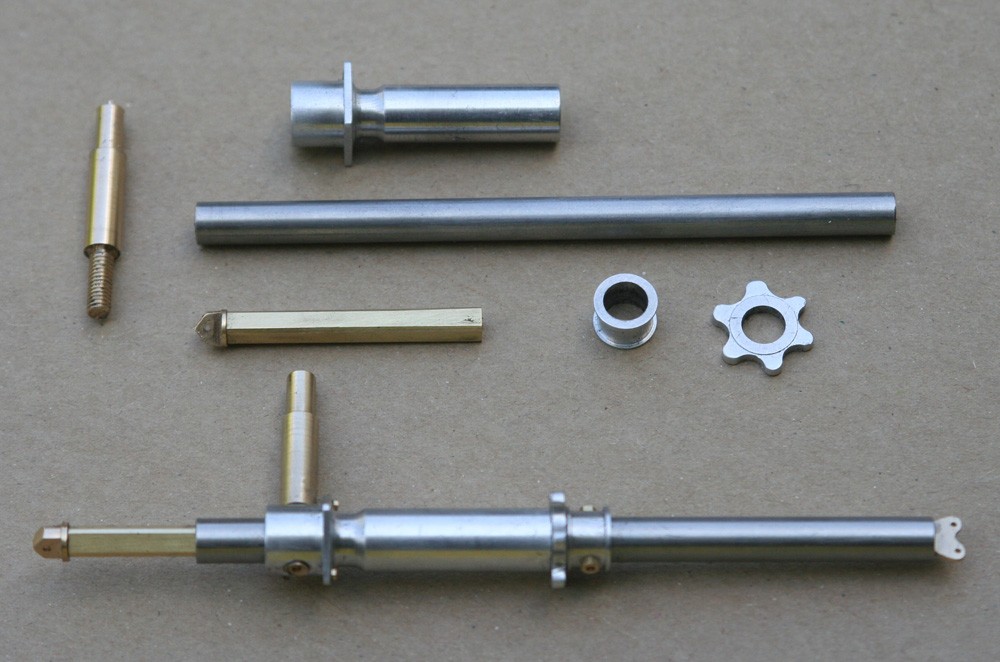 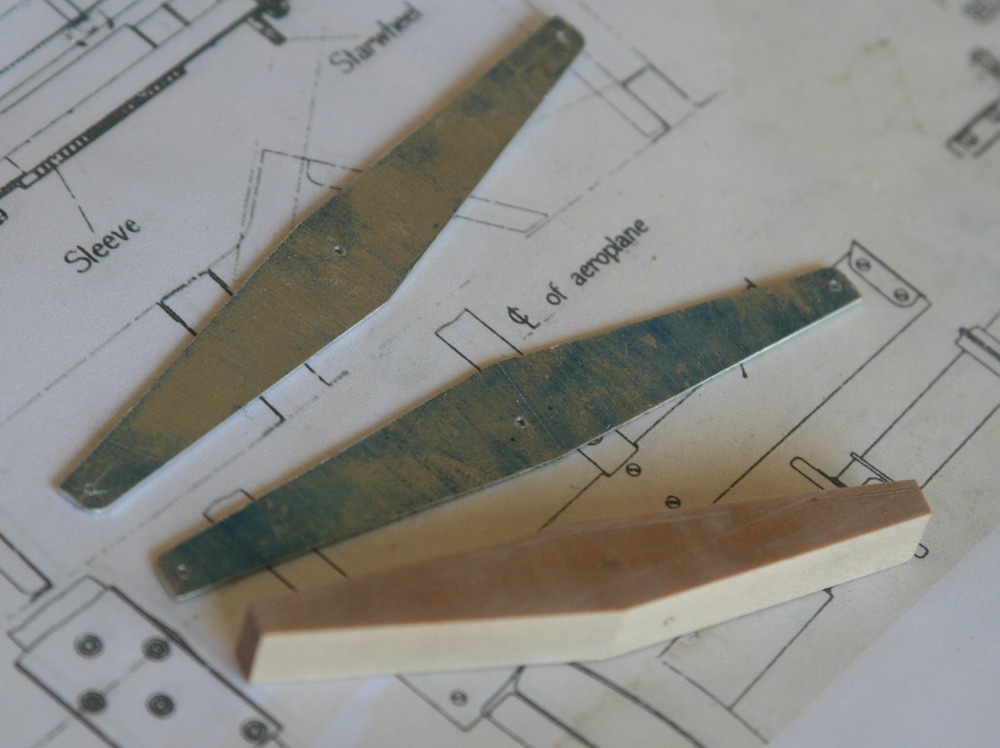 The rudder bar beam starts life as a blank milled from high-density model board. 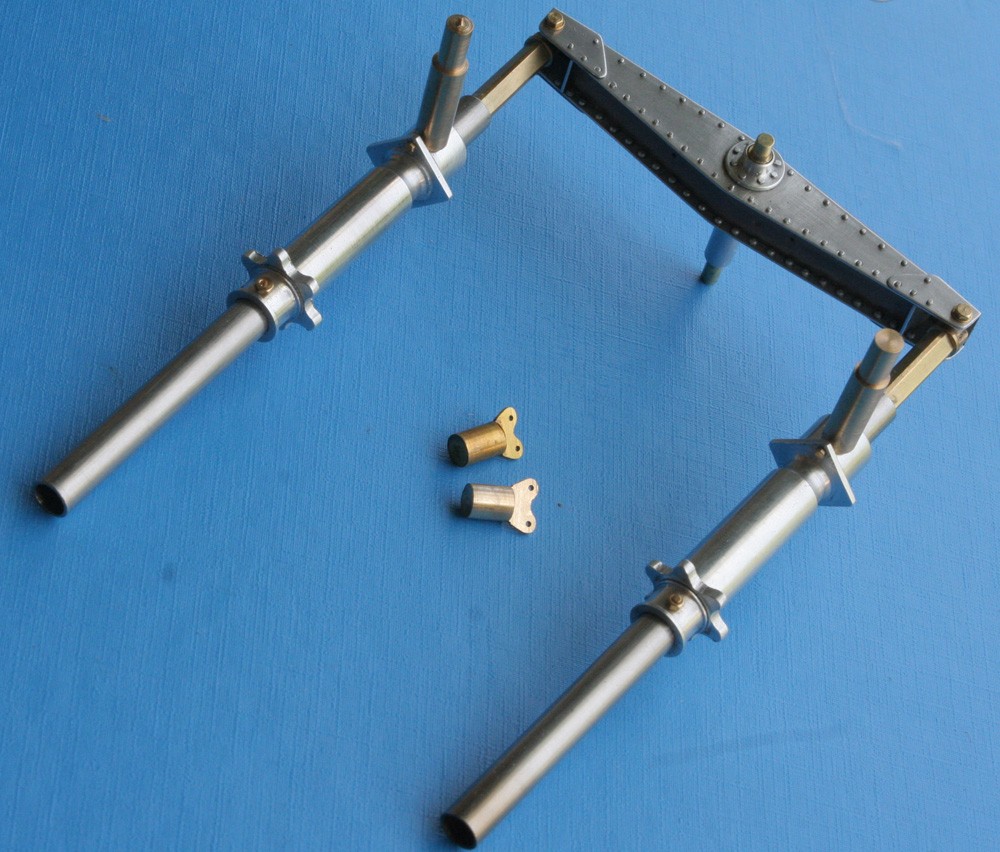 The almost completed rudder bar assembly with attachments for the control cables. 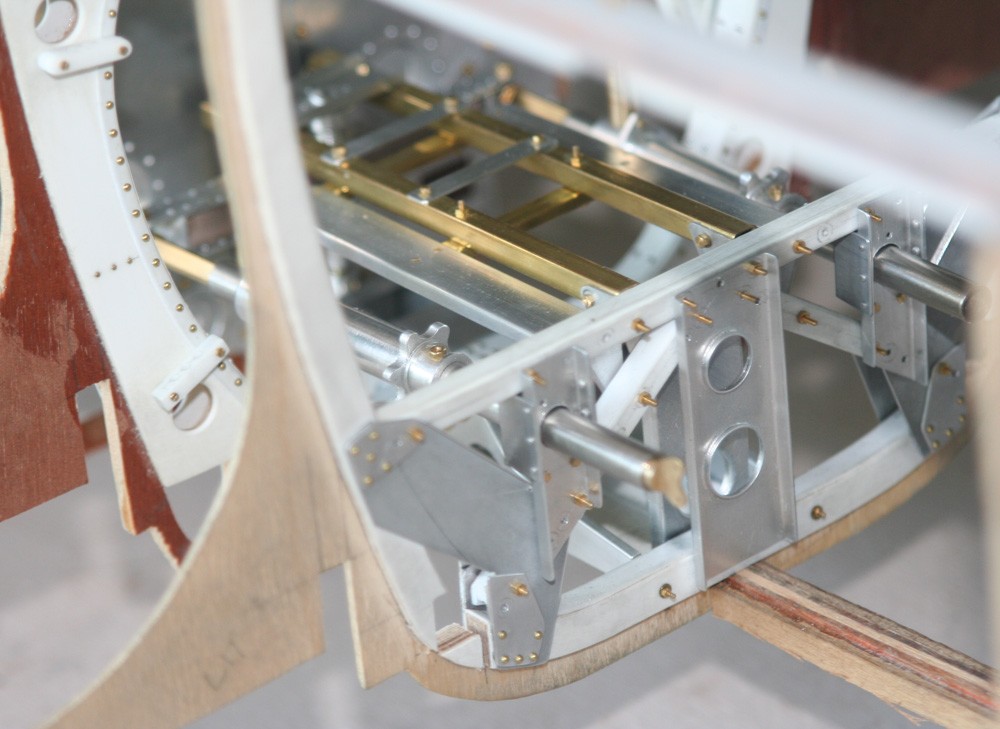 The complete assembly is dry fitted prior to painting. 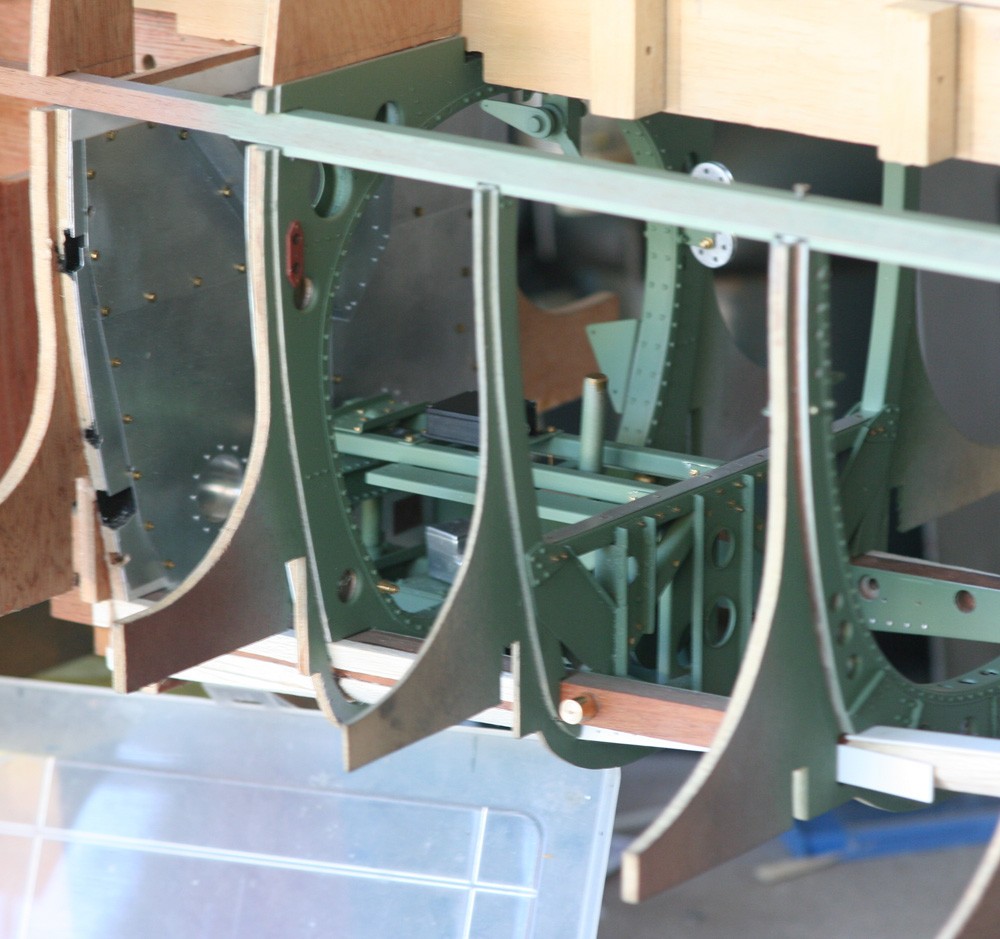 First stage in painting the interior of the fuselage. The process must be done in stages, since it would be impossible to airbrush hard to access regions of the cockpit once the skin is in place. Note the Dunlop relay valve is just visible in this picture.