Compared with the fuselage, the Spitfire’s wings are straightforward to cover over with litho plate. Across most of their undersides they are very nearly flat and on the topsides the gentle curvature is generally in one plane only, which obviates the need to anneal the metal. The major exceptions are the leading edge panels, two port and two starboard. These are not only the largest single skin items over the entire aircraft but they also embody some tricky compound curvature. The requirement where the two meet to achieve a crisp and accurate seam line along very nearly the entire length of the leading edge is a challenge. And if that were not enough, the lower panels are both pierced by no fewer that nine circular inspection plates.

In planning the sequence of the cladding process, it is immediately clear that the leading edge skin acts as the baseline perpendicular to which everything else is orientated, so it follows that, taking each wing surface in turn, the most challenging task comes first!

I have described this operation in detail in my book, Spitfire in my Workshop, and there is very little that I did differently here, save in one small but significant respect.  In developing the shape and curvature of a tricky skin section such as this, the work-piece has to be removed and offered up to the model many times, and each time in the exactly the same position. This is not as easy as it might seem, and it is even more critical when it comes to applying the contact adhesive: even a minor misplacement now can spell disaster because Evo-Stik ‘grabs’ and is totally unforgiving.

So this time round I improvised a very simple in situ jig in the form of three ‘ locator pegs’ made from 1/16-in. alloy rivets with their heads clipped off.  The litho plate is cut roughly to shape as usual, allowing a margin along the curved leading edge and a perfectly straight rearward or trailing edge. With this true edge taped precisely in position on the wing, I drilled three 1/16-in. holes along its length, one at each end and one roughly in the centre. The exact position of the holes is unimportant, save that they must pass through the metal sheet near its rearward edge and target one of the hard plywood wing sections. With my rivet ‘pegs’ driven gently down into the ply to within 1/8-in. or so of their tops, I could use them over and over again, to locate the work-piece with total precision while I trimmed and moulded it to shape.

The leading edge sections cannot be formed without annealing the litho plate.  But annealing makes the thin metal very soft (which is its purpose) and this softness can cause problems later, not least when marking and emplacing the rivet runs. Up to a point, dimples in the skin enhance the realism of the riveting, but they can also be disfiguring and soft metal is prone to accidental damage!  Thus I try to keep annealing to the very minimum necessary, which in this case means only along the forward facing edge where the compound curvature is most pronounced.

With the panel located on the pins (and taped if necessary), its surface is worked with a block of soft balsa wood, massaging the metal gently down onto the curved surface below. Further annealing sessions are usually necessary, but gradually and with patience, the metal assumes the underlying three-dimensional shape.

The crucial leading edge seam line must, of course, be cut after the panel has been shaped and this is not easy in the softened litho plate. So I take pains at the marking out stage to leave as little margin of overhang as possible, which also facilitates the forming process.  As can be seen in the photographs, I pre-cut rough ‘notches’ into the work piece at the positions of the machine gun and cannon ports. This also helps in the metal forming, but more importantly it provides access to valuable local reference points over which to align a straight edge when marking the line of cut along the leading edge. Engineer’s blue dye helps a lot here.

The only way that I know to make this extremely awkward final cut in the soft and curved over metal is to use sharp scissors, followed where necessary by some delicate work with an fine abrasive pad. Only when the panel has been bonded into position do I attempt to trim the excess metal within the armament ports.  A combination of small curved scissors, a sharp scalpel and abrasive paper wrapped around a dowel usually does the trick. But it is a delicate operation and it relies on a firm adhesive bond or the metal can become locally distorted. So I always contrive to inject some very thin superglue around the armament port rims. It gets sucked up by capillary action and makes for a very solid bond indeed.

A final word about finishing: As I have pointed out in previous accounts, an annealed skin panel, particularly the sort described here, can look alarming ‘lumpy’ immediately after gluing in place. Do not despair, for it is remarkable how this lumpiness disappears under progressively fining grades of abrasive paper. It can be hard and time-consuming work but the finished job is worth it.

I will have more on the lower leading edge panel in due course. 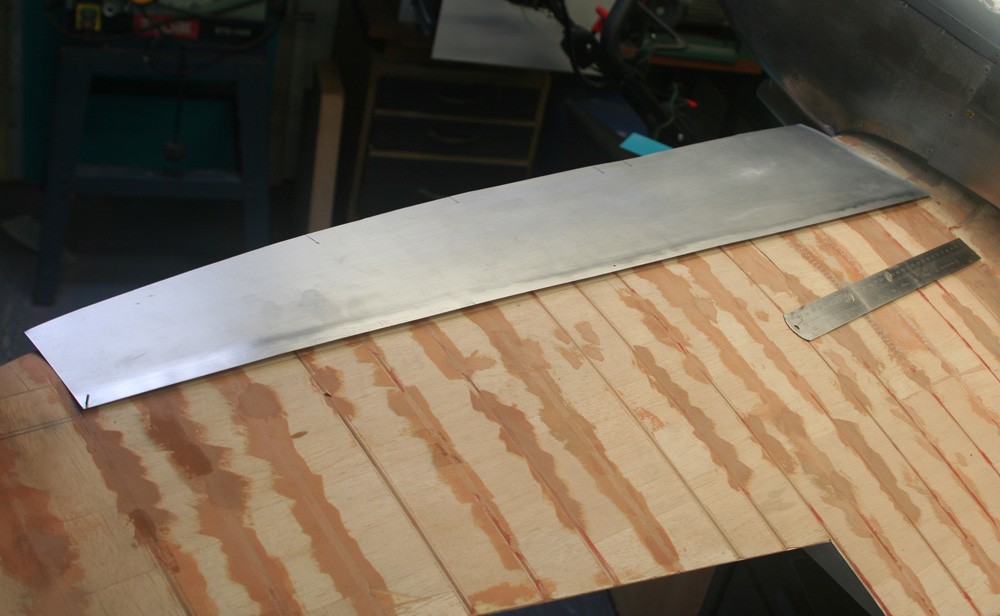 The skin blank in position on the port wing. One of the three locator pins has been emplaced and the holes drilled for the other two. Note the marks indicating the positions of the armament ports. 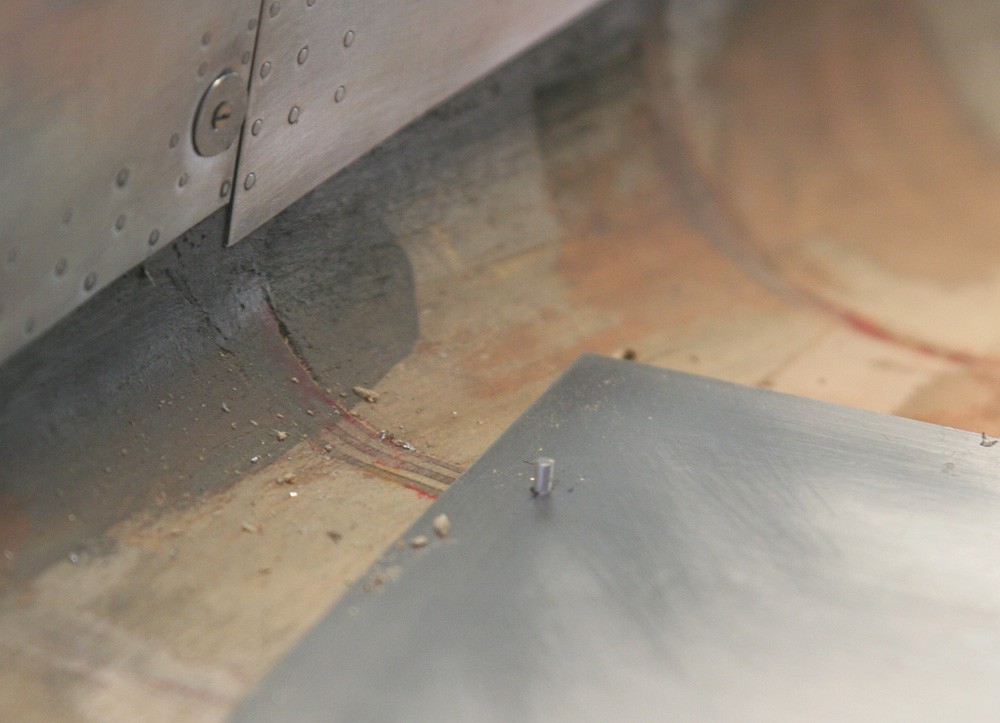 Close up of the innermost locator pin. 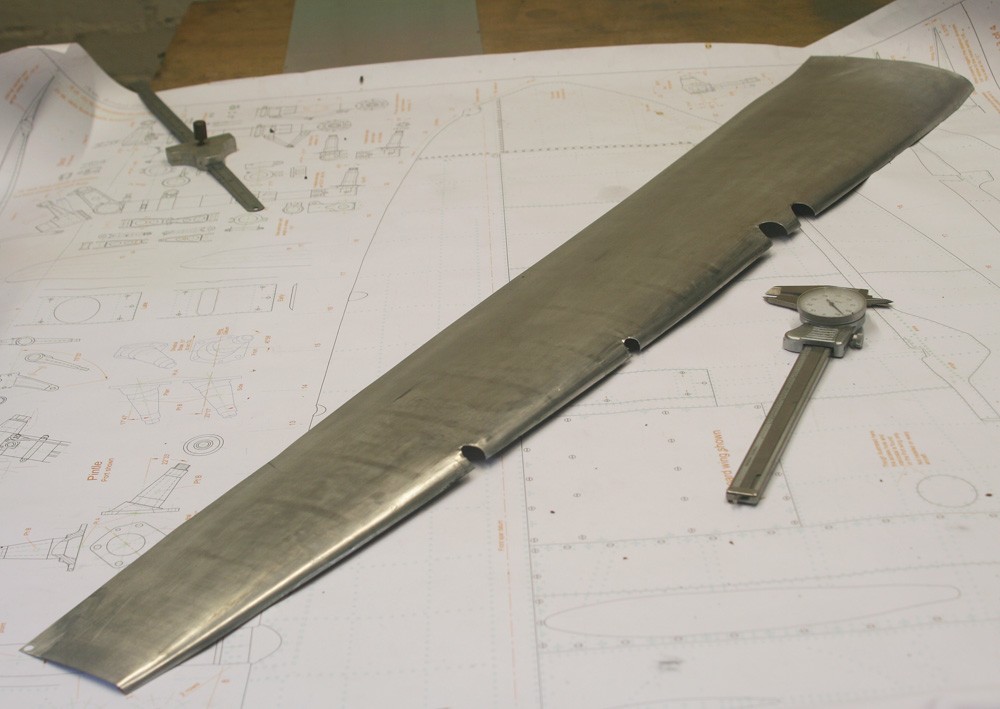 The workpiece after it has been annealed and worked to shape as described in the text. 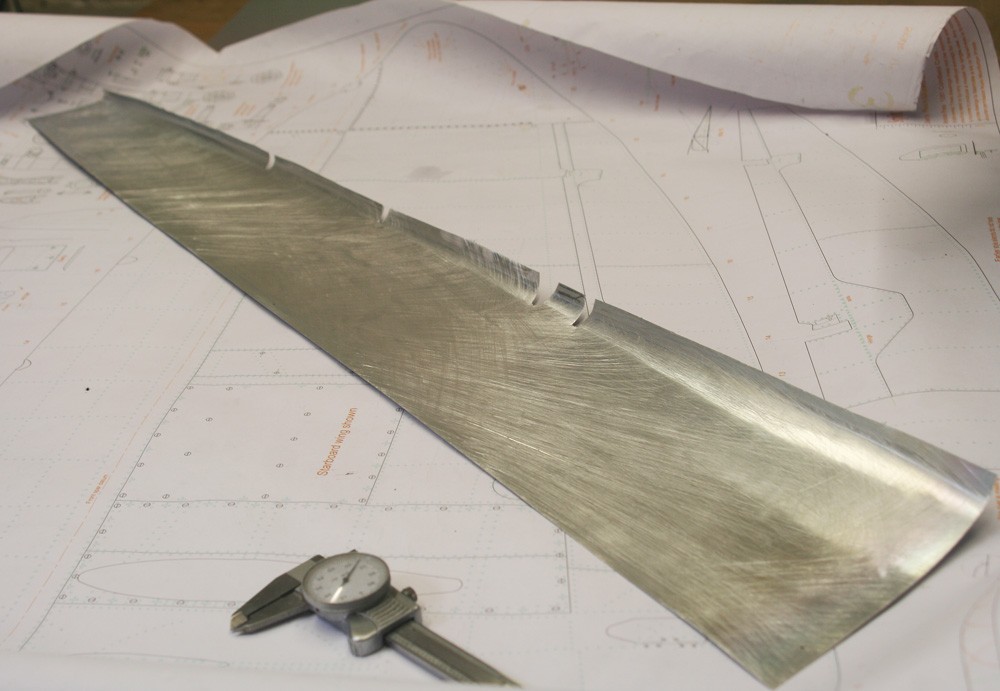 The underside is 'keyed' with coarse abrasive paper to enhance adhesion. 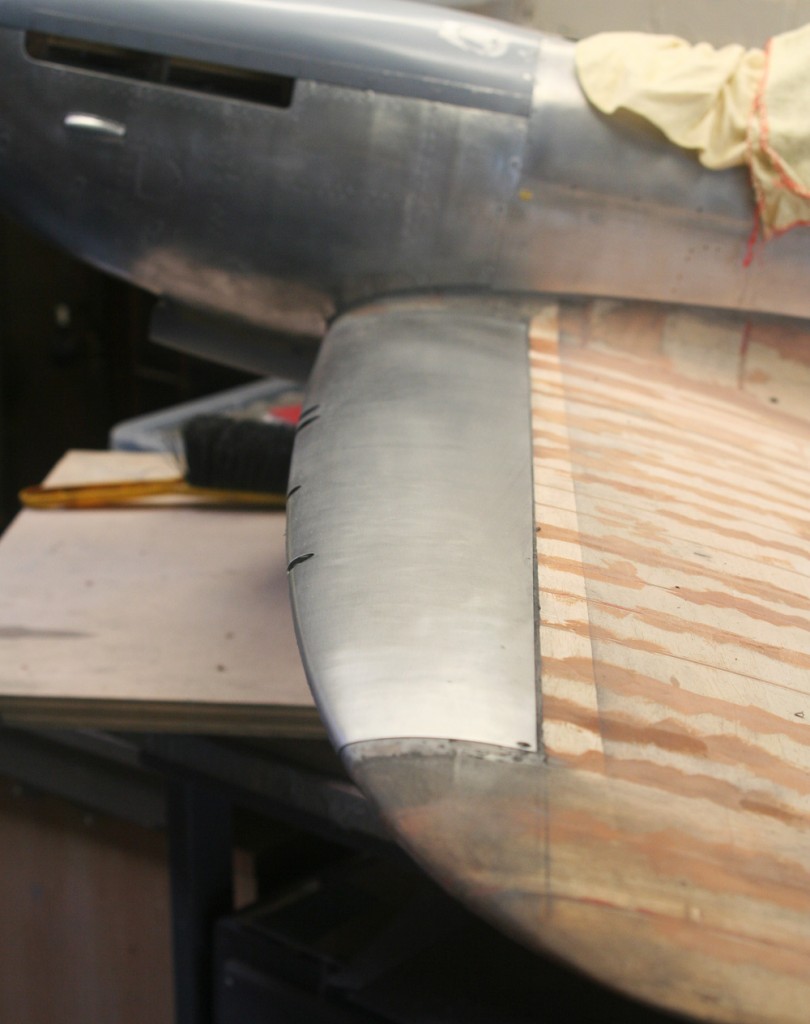 The skin panel has been glued in position and the locator pins removed. Plugged with fresh rivets and rubbed down, the three holes become almost invisible. 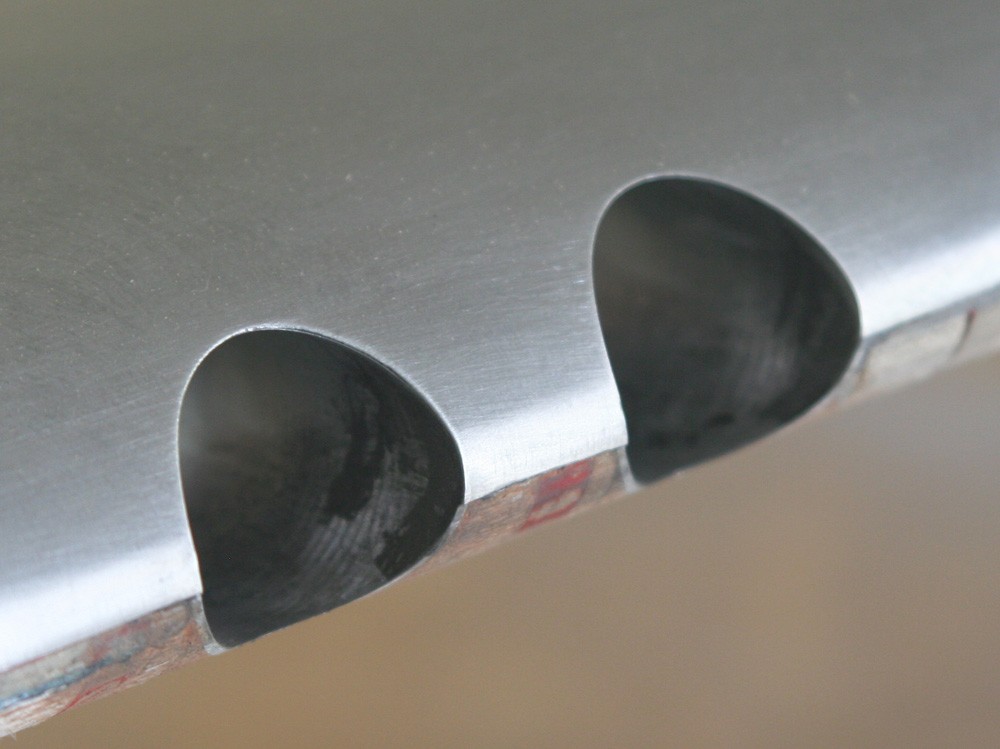 The cannon ports after cleaning up: A neat job. 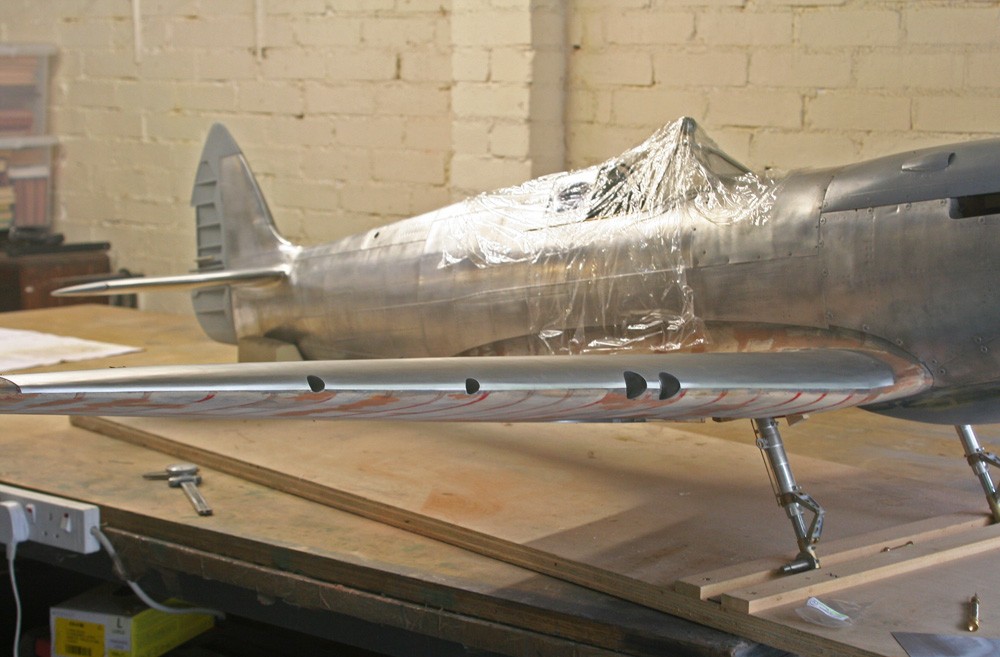 A clean and perfectly straight cut along the leading edge takes considerable care to achieve. 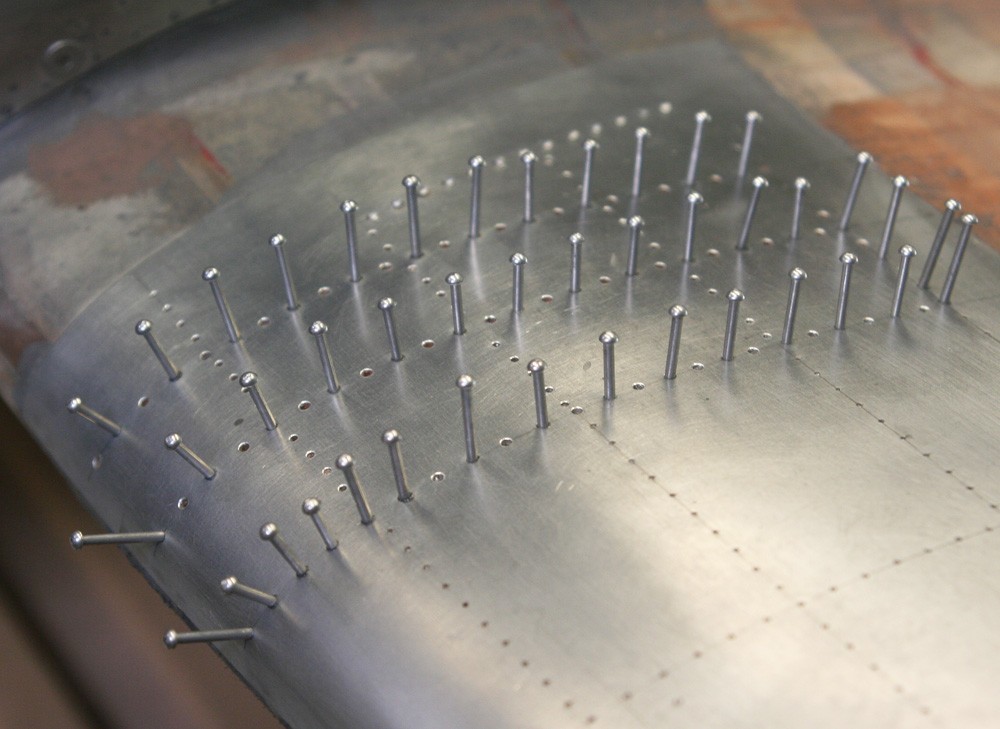 The riveting stage under way. I have described this process many times, so I do not need to repeat it here.