I have described how, when building the wooden wing cores, I neglected to provide for the flaps – an oversight that required some tricky remedial surgery (see diary entry ‘Forgotten flaps’). Now with the wings fitted permanently I could get on with completing the job. This involved:

- Extending the routing-out of channels in the balsa and ply across the dihedral break, so as to delineate the short inner section of the split flap

As my pictures reveal, I was not too fussy about the routing-out. The objective here is to create channels in the underlying balsa and ply to give the impression of a three dimensional structure and the ‘illusion’ of an internal wing void visible around the sides and particularly at the forward edges of the flaps.  The ‘precision’ comes in the ‘rebuilding’, including the grafting in of such internal structural members that can be seen.

As previously explained the outer spar tubes are basically lengths of deal quadrant over which the flap lower skin is shaped. Only the visible extremities of the alloy spar tubes and their conical end-spar sockets are machined in metal and grafted into position in the routed out channels, taking great care to ensure alignment. Again, my pictures show how this was done.

Close inspection of the Spitfire’s flaps in the closed position will show that they do not shut to the top wing like two leaves in a book, but rather the wing trailing edge is recessed to accommodate the flap at its extremity by means of a delicate wedge-shaped mounding which scales to less than 1/8 in. deep and some 18 in. long! This posed a significant problem, because to machine such a delicate and extended section in brass or alloy was so far beyond my means or abilities as to preclude even the briefest consideration.

As so often in such situations I was forced to compromise, and in the end I used commercially available brass angle section. Yes, this falls hopelessly short of the real thing, but it proved well suited to gluing in position along the knife-like trailing edge, and with the exposed sharp outer corner rounded off, it serves well enough. Most importantly, it ‘finishes’ the trailing edge in the region of the flaps, and it gives the impression of a neat and tidy recess to accommodate the flap trailing edge, and that is what I set out to achieve.

The biggest, in fact only, problem with alloy-skinning the flap came with the short inner section, and this because it was extremely difficult to reconcile the precise fore-aft curvature of the metal skin round the short spar tube with the conflicting gull-wing geometry so obviously manifest in this region of the wing root. This proved so challenging that I resorted to taking a resin cast of the entire inner flap surface so as to provide a hard and resilient mould over which to pre-form the annealed litho plate. 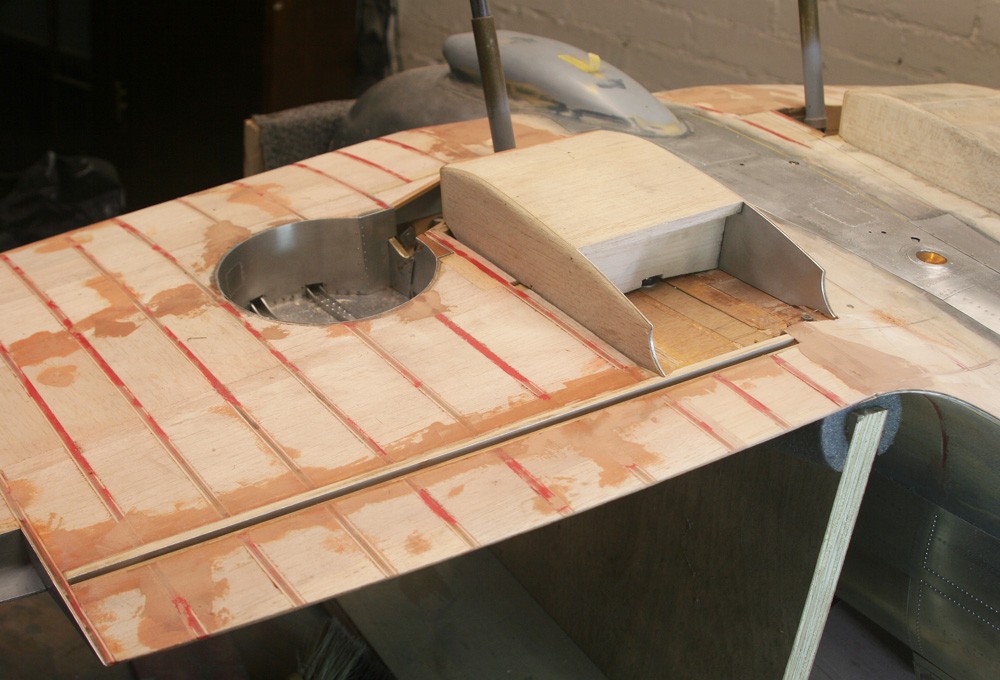 With the wings fitted permanently work could begin on completing the split flap assembly. In this picture the radiator and oil cooler fairing is being test fitted. 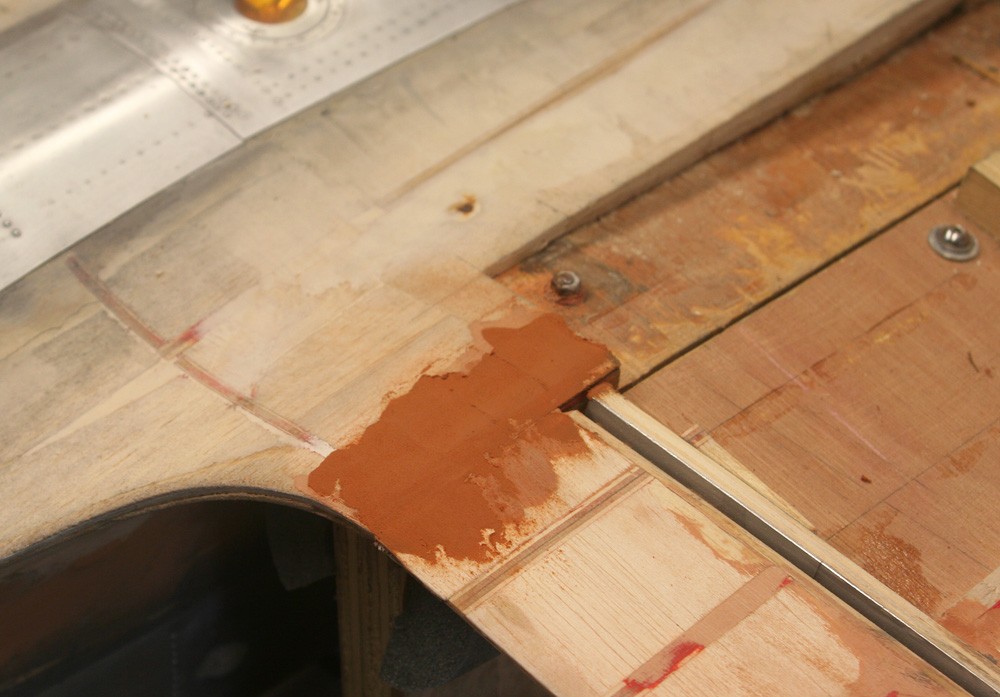 First some wood filler to make good the join between main plane and fuselage at the spot where inner and outer flaps meet. 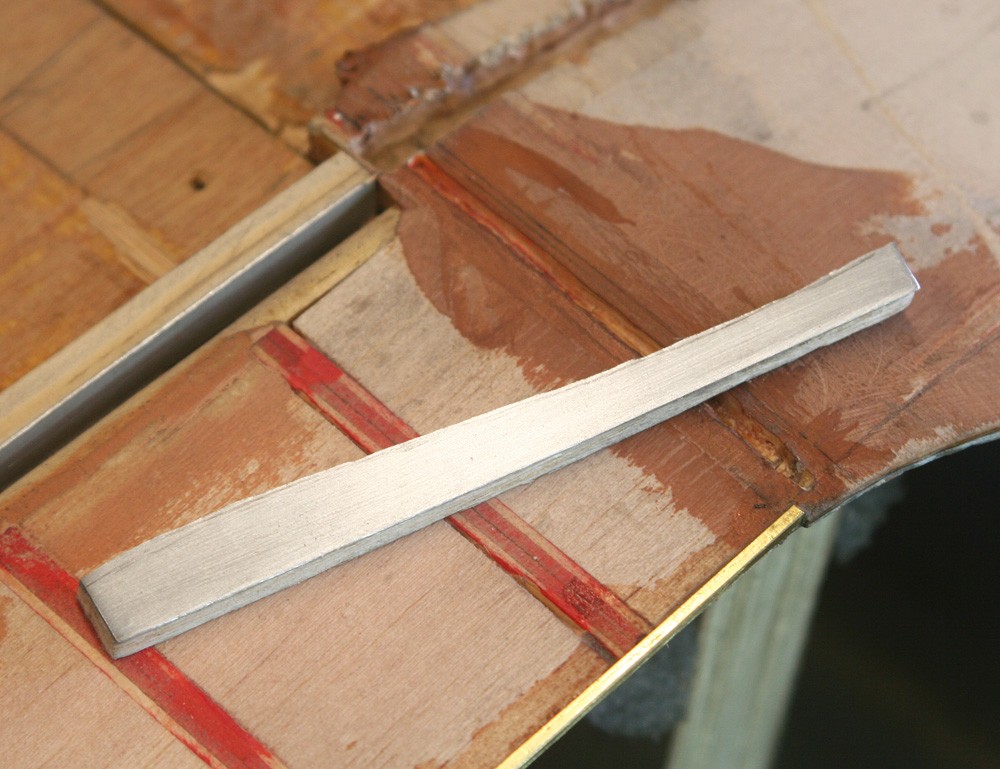 Here much of the routing out around the inner flap has been done, and a scrap of aluminium-faced balsa to represent the continuation of the rear auxiliary spar is ready for installation. 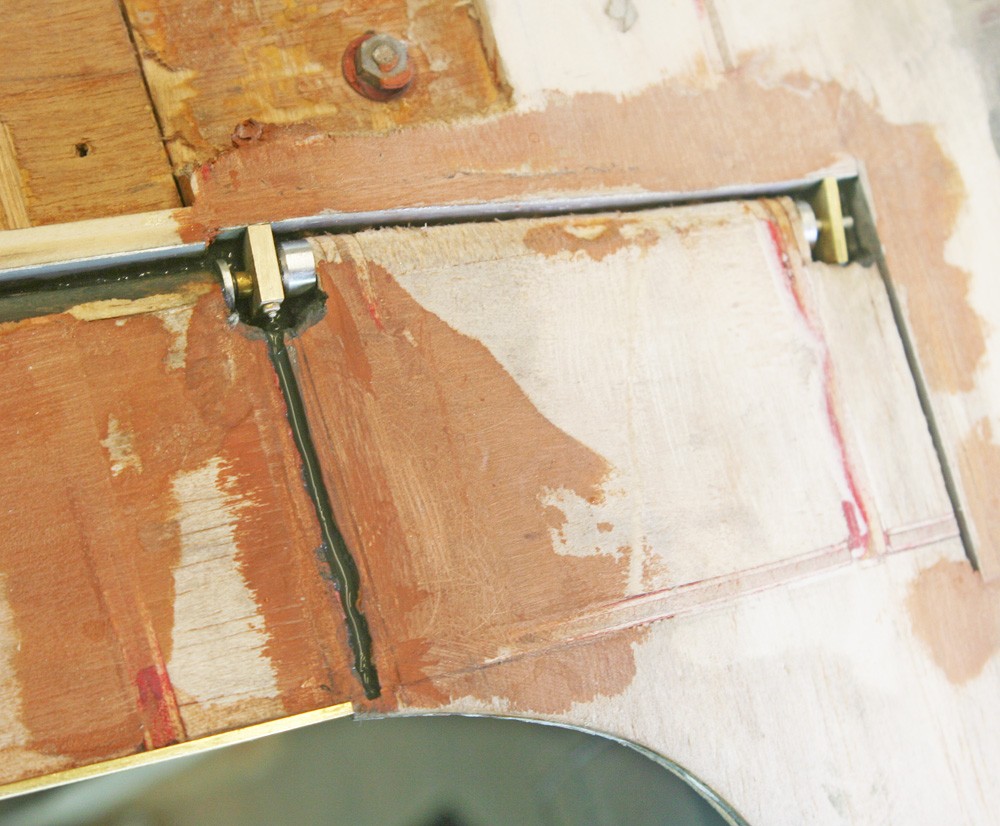 Detail representing the visible parts of the spar tube, end spar sockets and bearings have been machined and grafted into place, using superglue. Some dark grey paint has been run into the channels around the flaps to improve the final effect. 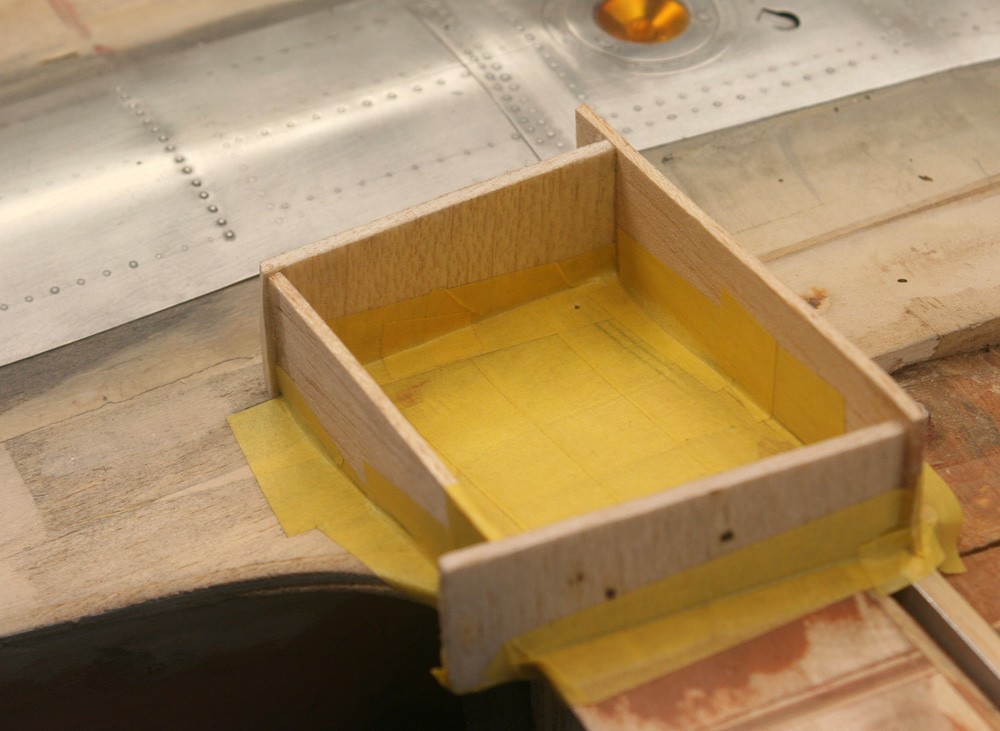 A makeshift box for the resin cast as described in the text. The yellow tape is to stop the resin from sticking to the wood. 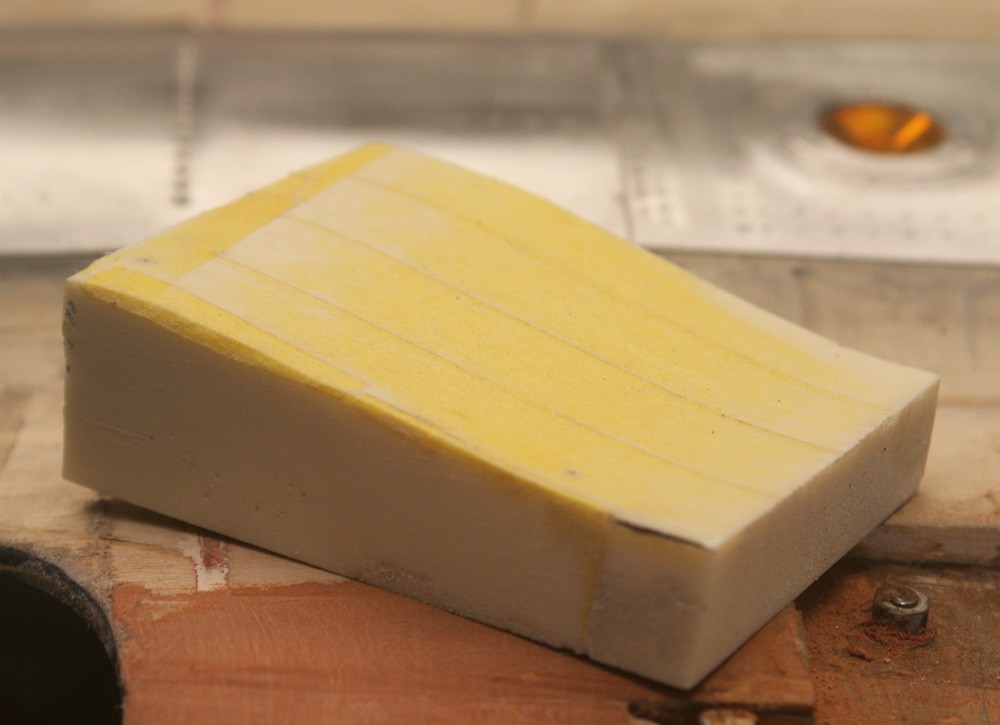 The resulting resin casting as used to form the lithoplate inner flap skin. 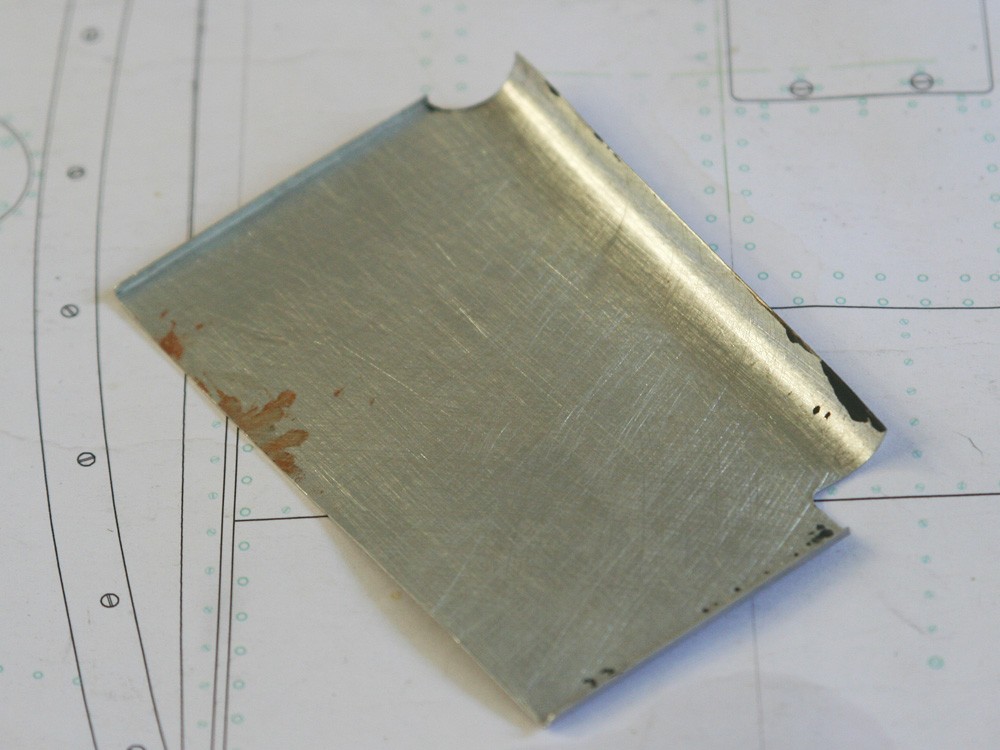 Once formed the curvature of the skin panel can be fine-tuned on the model itself. Here it is ready for installation with EvoStik contact adhesive. Note the turned over edges, that both stiffen and finish the piece. 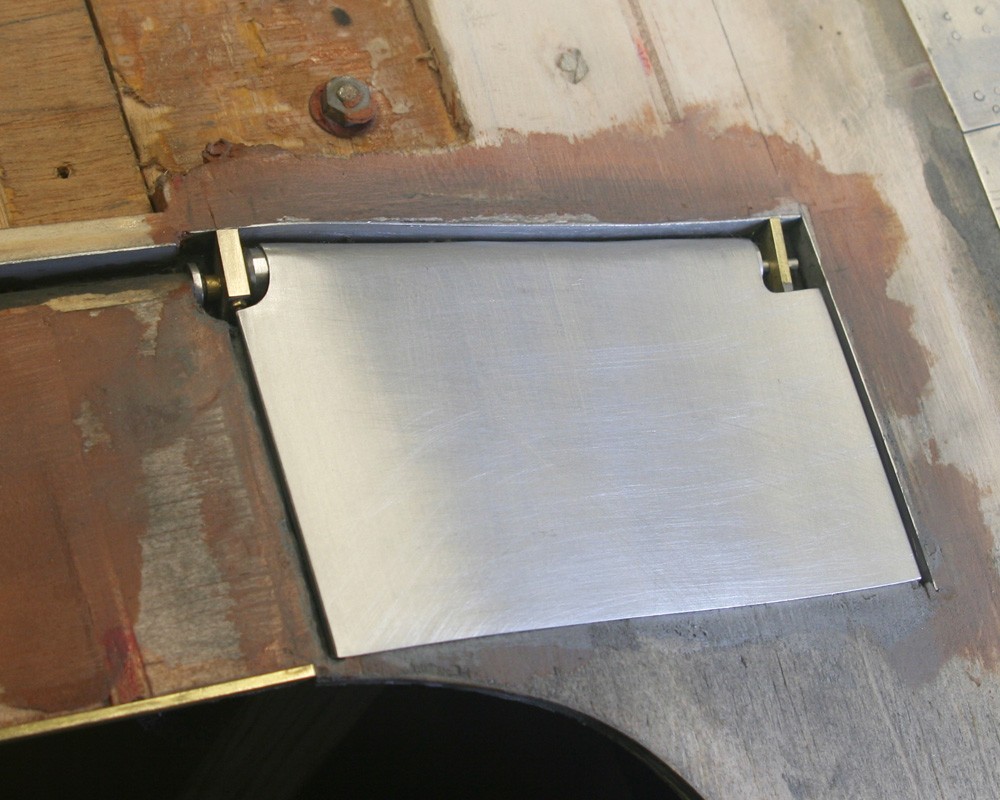 With the skin panel in place and the surrounding substrate made good with filler, what was previously a rough-looking job begins to take on the look of 'precision engineering'. The brass angle section described in the text can be clearly seen. 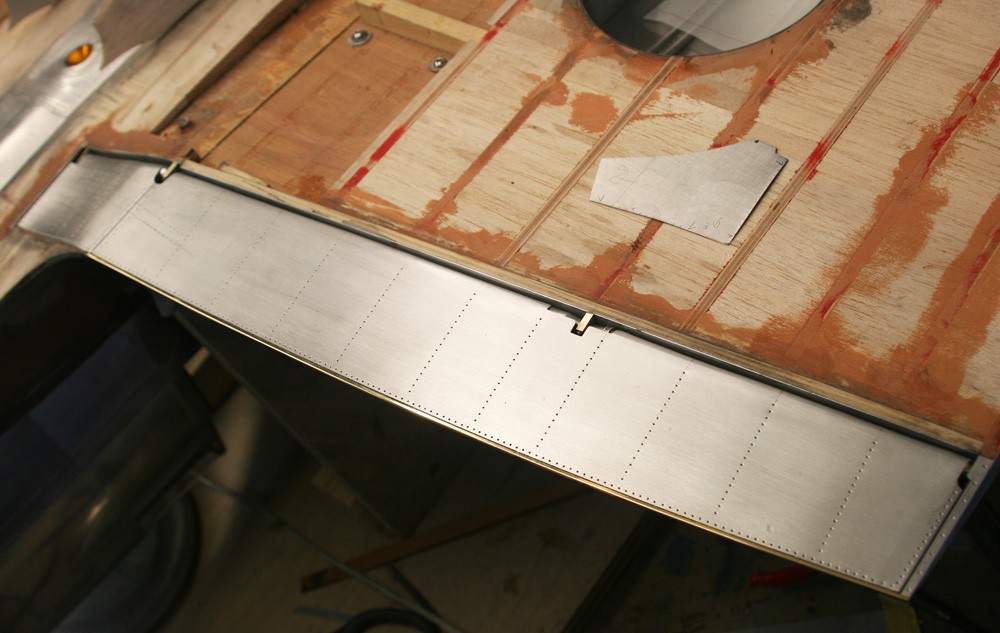 Now the rest of the flap can be covered with lithoplate (in this case it is the port wing). Unlike the inner flap, this part required no annealing. The recessed nature of the flap relative the wing can be appreciated in this picture. 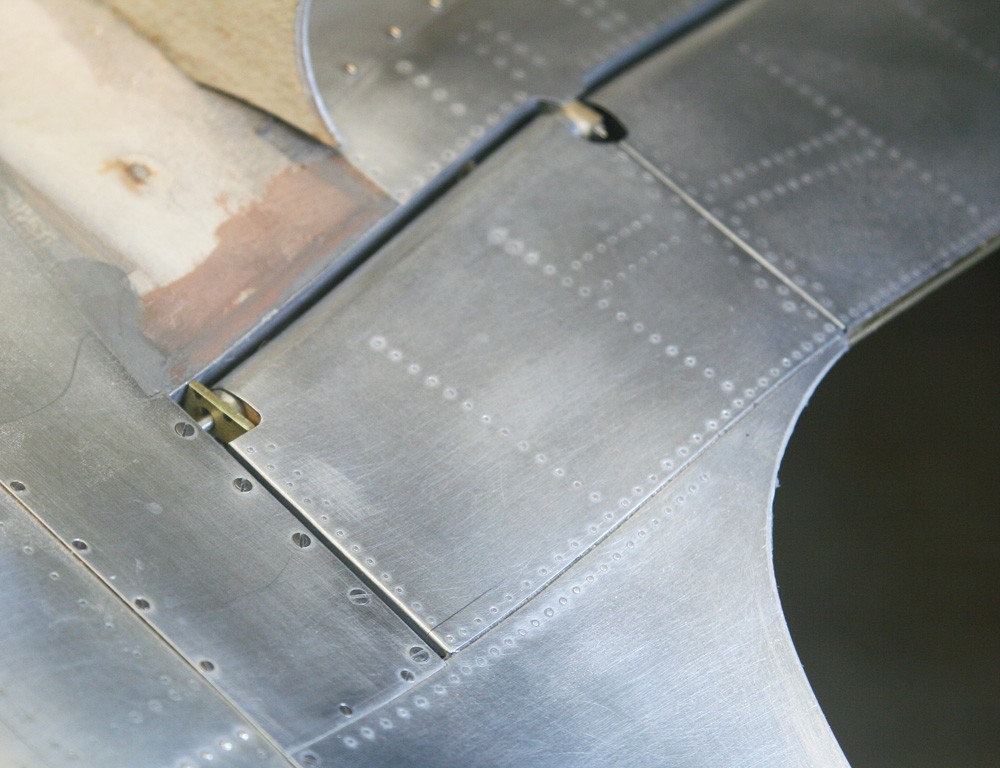 The addition of rivet detail brings the job to life. 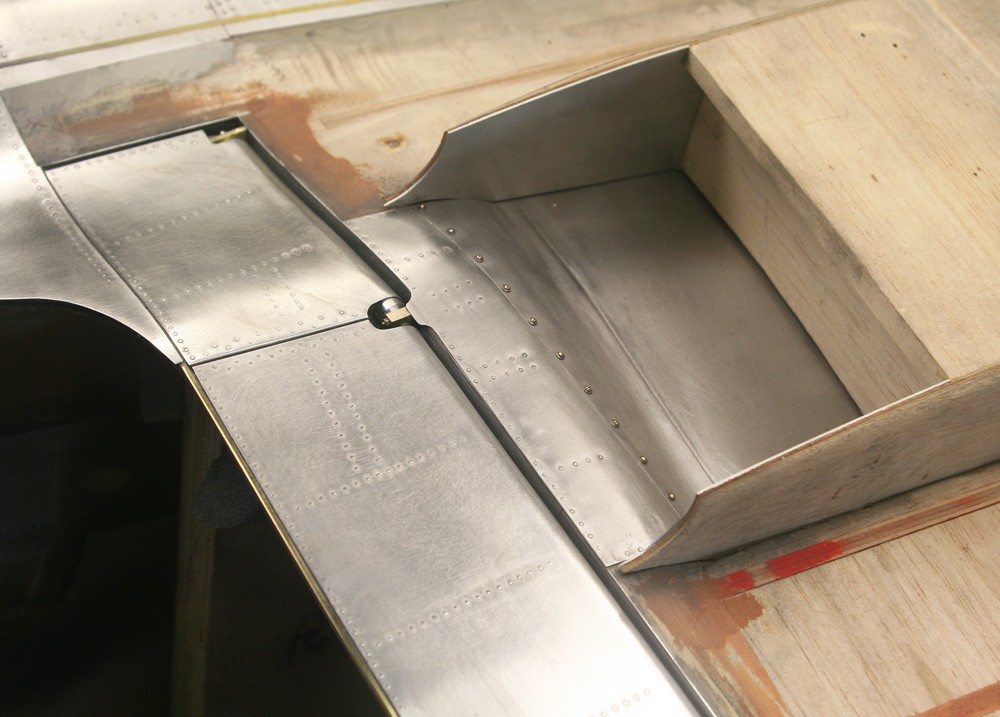 The finished flap assembly, including the inter-wing ducting aft of the radiator and oil cooler. In the full-sized aircraft this slopes much deeper into the wing, but the omission will not be visible in the finished model. Even so, a significant amount of material had to be removed from the under-wing and the shape re-sculpted with the help of scraps of soft balsa grafted in and carved to achieve the required contours.