The big, elongated tear-shaped blisters above the cannons help define the C-wing of a Spitfire, and they present a challenge for the model maker. Their maximum scale depth of 13 mm and axial asymmetry demanded a more sophisticated tool than the simple two-dimensional jig described in my previous blog. I reasoned that my best chance to achieve the correct shape and, crucially, a clean, crisp baseline crease was to make a three-dimensional female mould into which to impress well annealed litho plate.

Carve a basswood pattern for the blister
Glue it to a flat baseboard
Seal with automotive primer
Wall-around the baseboard with scrap balsa
Pour in two-part epoxy resin to create the female mould.

Advised by specialist UK supplier Alchemy Ltd (see links pages), I used their EP 4905 epoxy resin to make the mould, an exceptionally dense, hard and durable product capable of withstanding considerable physical stress, and for these advantages the 24-hour cure time was a small price to pay. However, when came the time to de-mould, my plan went seriously awry.  Having experimented unsuccessfully with a proprietary release agent, I reasoned (inexplicably) that a thin coat of Humbrol masking fluid would make a foolproof substitute. So confident was I in this bizarre assumption that I failed even to test it. Suffice it to say that it took a full morning and most of the afternoon to separate the heavy casting undamaged from the pattern and its half-inch thick baseboard. I imaging that I know now what it means to chip a fossil out of solid rock!

From then on the job came good: I achieved acceptable alloy pressings on the second and third try. My pictures show the process, which is very simple. The annealed litho plate blank is clamped to the mould using the bench vice, and the thin, softened metal is ‘rubbed’ down into the underlying cavity with round-ended hardwood tool handles of various diameters. The key to success is to ensure the metal does not move relative to the mould during the process, which may require repeated annealing. For the finishing touches I switched to a flat hardwood tool to dress the face of the mould and thereby develop the sharp crease-line mentioned above.

It will be obvious that up to this stage the metal panel is developed in the flat without consideration for the upper wing camber. However this is easily remedied since the workpiece, after marking and trimming to shape, is malleable enough to be coaxed to the upper wing curvature, prior to the vital step of backfilling the blister cavity with resin. As before, I used quick curing model makers’ two-part resin for this process, finishing with a thin skim of automotive filler to conform to the now slightly curved undersurface. 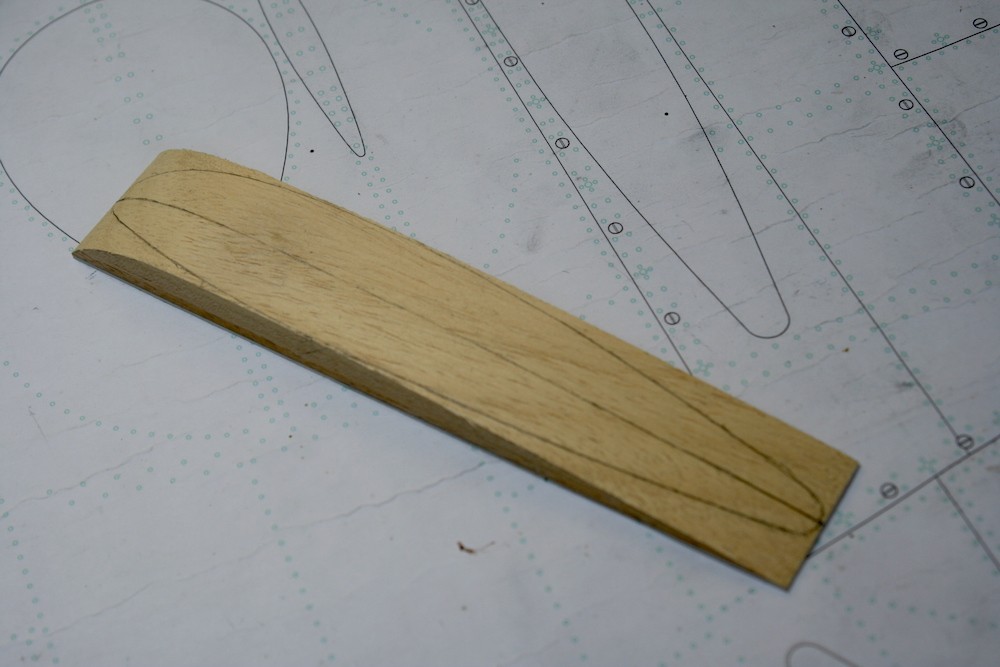 An intermediate stage in the carving of the pattern. 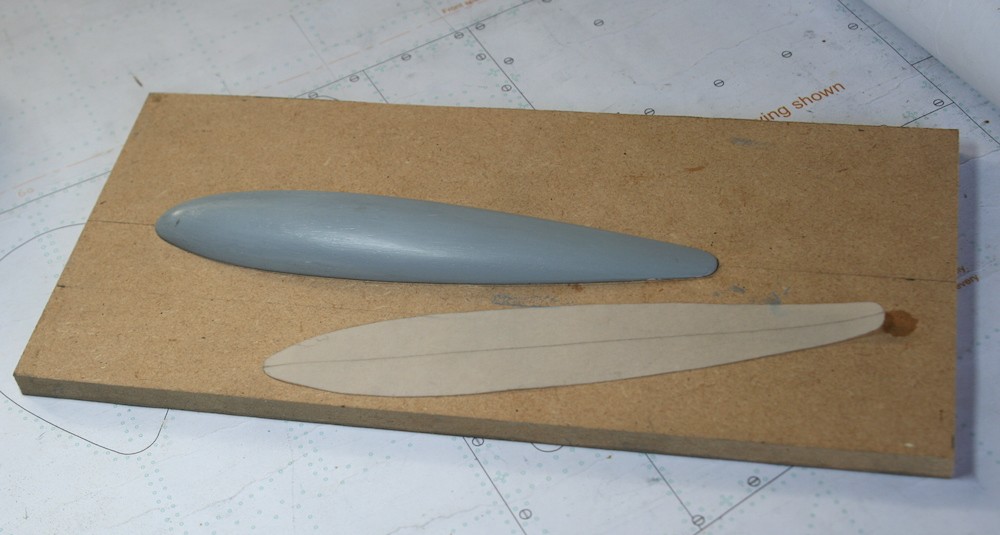 The pattern is glued to a baseboard 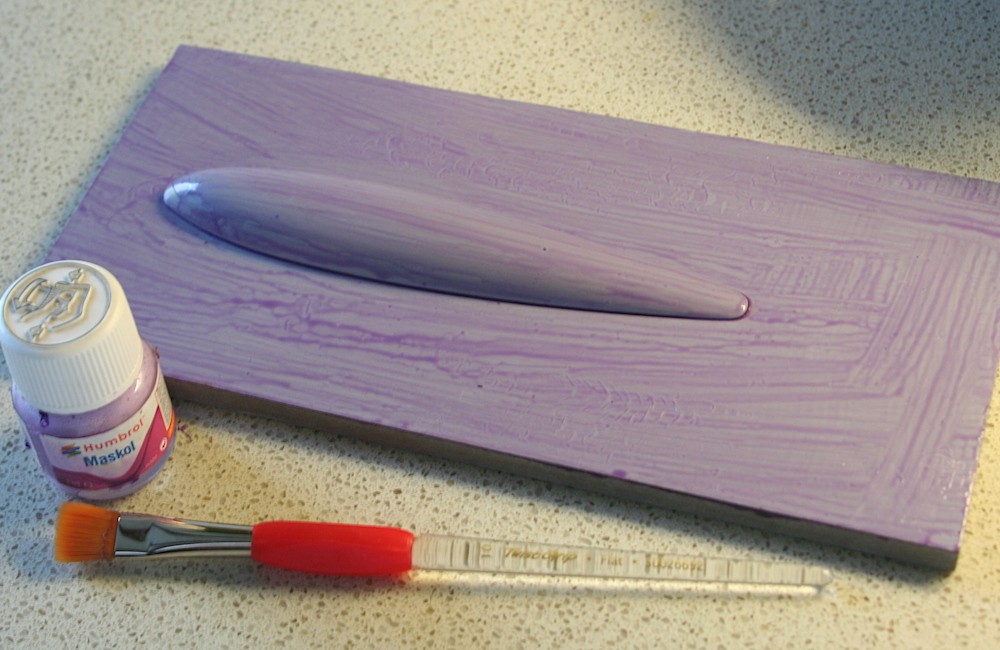 After sealing with primer I improvised with Humbrol masking fluid as a 'release agent'... A huge mistake! 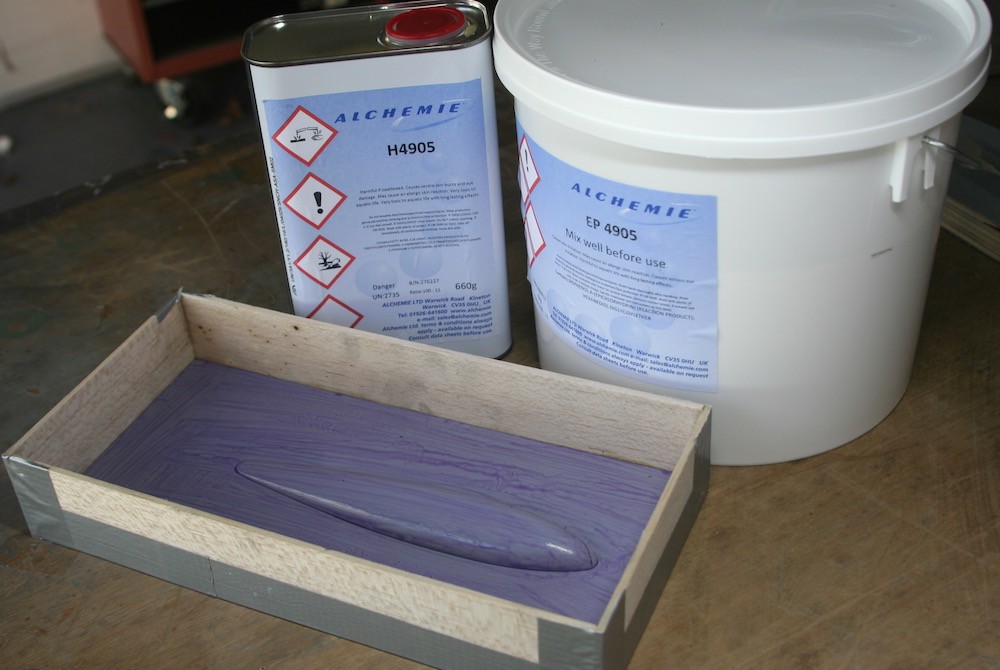 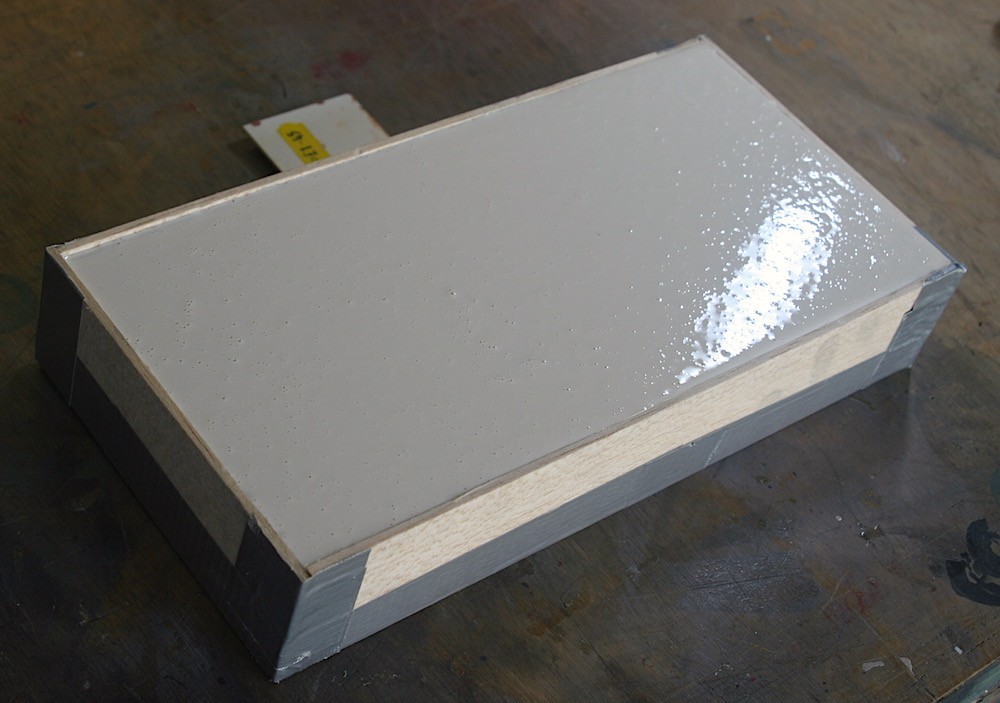 Curing time is 24 hours, but I allowed longer. 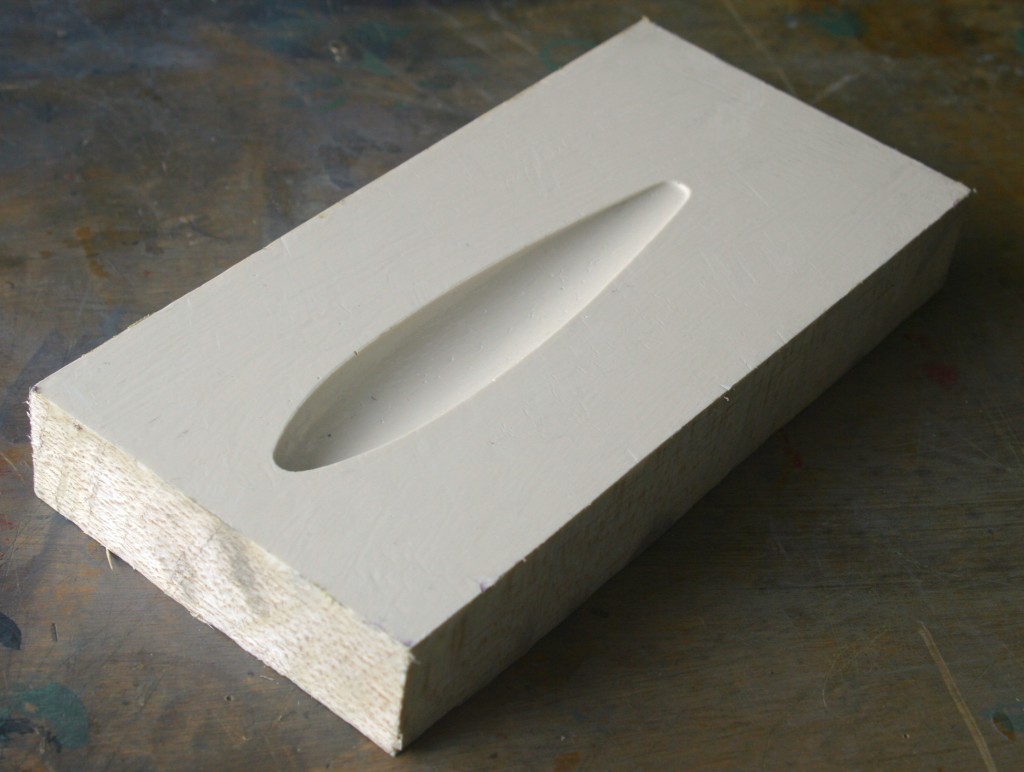 The EP mould after its painstaking removal. 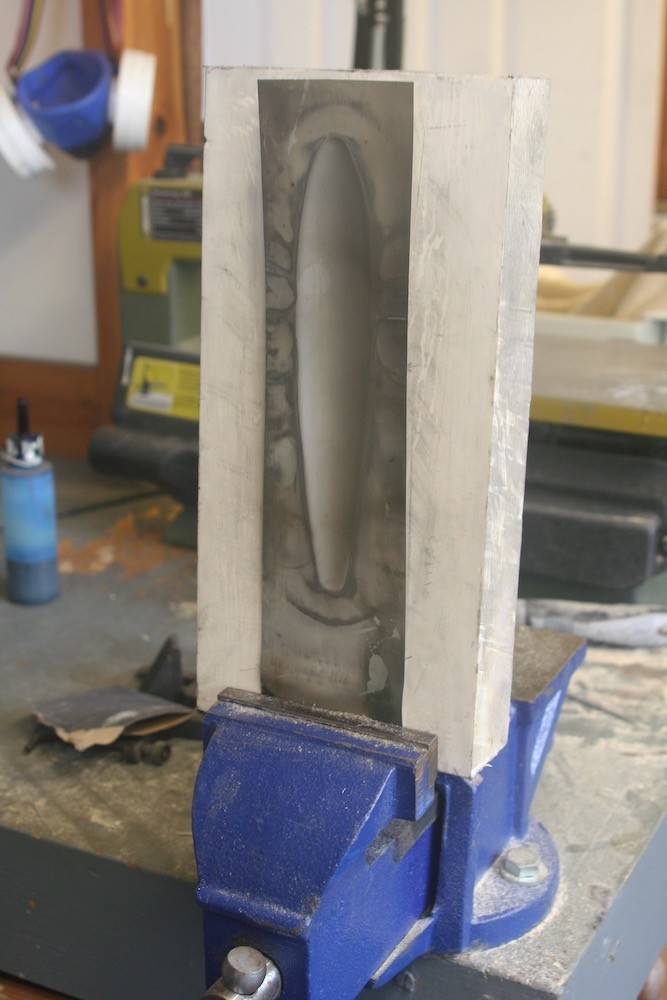 The workpiece during formation of the first blister. 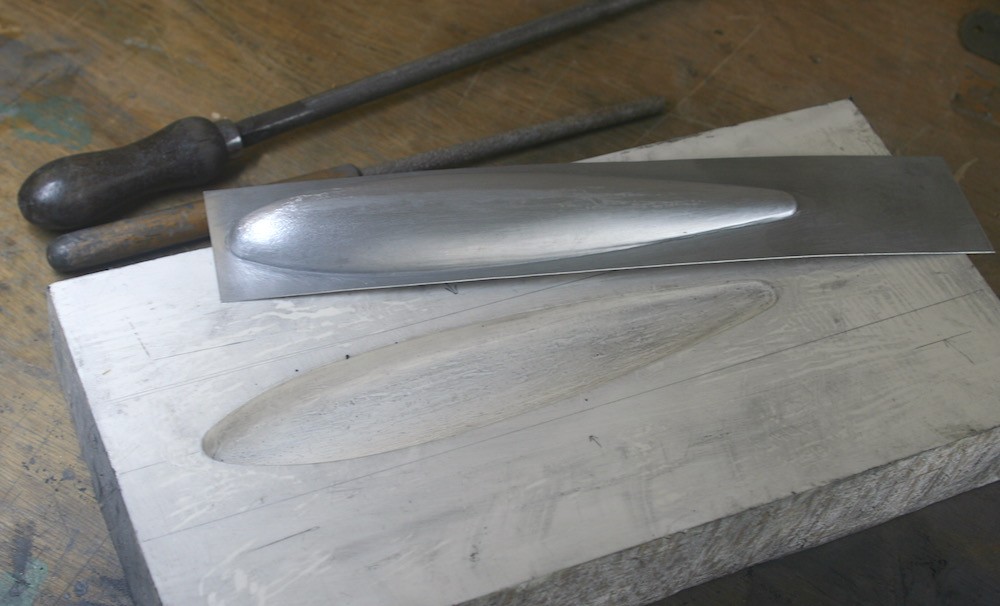 The hardwoo handles of two files were the only tools necessary. 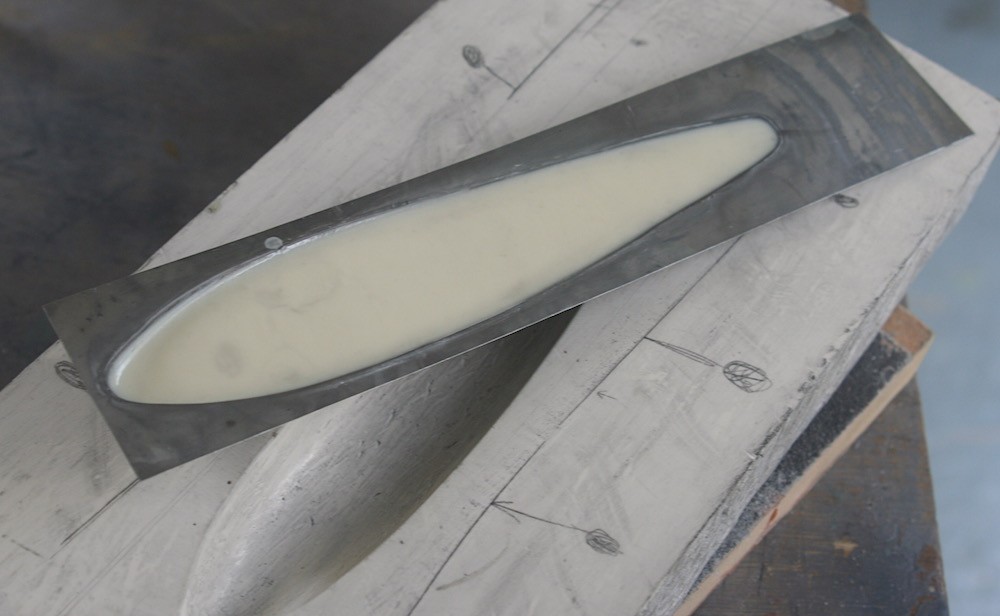 Backfilling with resin is vital for strength and durability. The resin was followed by a skim coat of car body filler to conform precisely to the underside curvature of the piece. 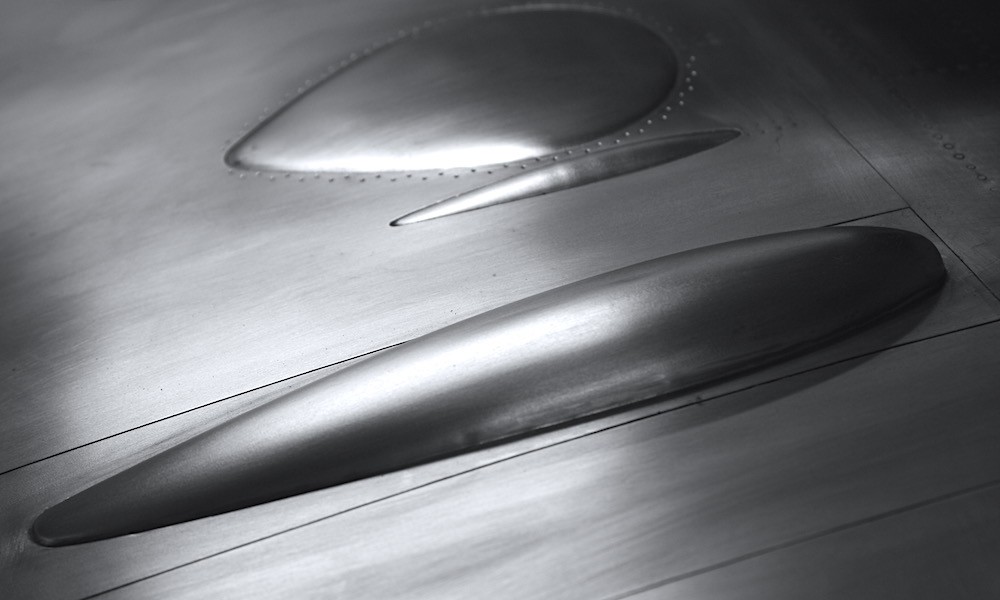 The blister glued in place on the top wing surface. 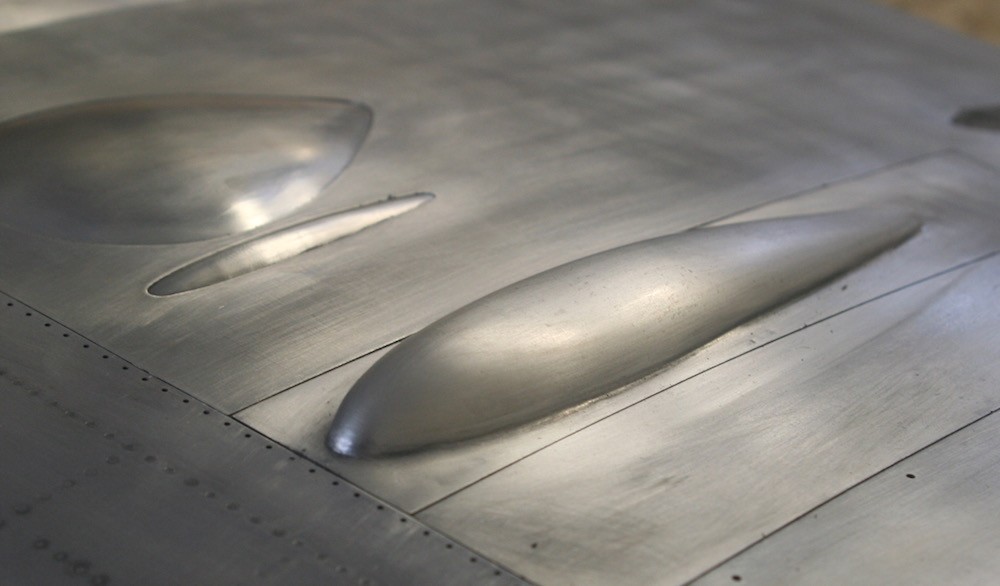 Rivets and screw fasteners have yet to be added.