By the latter part of March I had skinned with litho plate very nearly all of upper surfaces of both wings. At long last I could install the graceful wing root fillets, closing the yawning gap between mainplanes and fuselage. From a visual standpoint, this is a landmark stage in the model, and one that began back in October 2016 as an accompaniment to work on the flaps and fuselage underbelly.

The fillet is installed as a sequence of separate litho plate panels and its piecemeal nature facilitates the job enormously. However, it also makes it crucial to have accurate templates precisely delineating the fillet’s overall shape and location as it arcs from the wing leading edge along both  the flank and belly of the fuselage to the trailing edge where it wedges out to a point. So my first task was to take a set of templates direct from the drawing onto heavy-duty tracing paper thick enough to withstand re-use. It is vital to accuracy and repositioning that these templates are keyed with unambiguous horizontal and vertical datum lines, notably seam lines in the underlying fuselage skin plates.

A little preparatory work with ‘easy-sand’ filler pays dividends at this stage. This is because most of the fillet panels require annealing during their formation, which means – as I have found to my cost – that there is a high probability that the softened metal will become imprinted by the raw, truncated edges of the underlying fuselage plates, with significant and irremediable damage to the aesthetics of the job.  Indeed, as a general rule I always strive to keep annealing to the bare minimum: Un-annealed litho plate gives the best surface finish, and especially where there is a risk of excessive distortion and dimpling in the vicinity of screw fasteners and/or carelessly applied rivets.

The only item common to both the dorsal and ventral sides of the wing root fillet is the small triangular shaped plate at the trailing edge, and this is the natural start point. It is cut oversized, dressed in situ to assume the underlying contours then marked and cut to outline using the templates. This, in a nutshell, is the sequence followed throughout, and it requires accurate positioning and lots of masking tape to secure each of the individual parts and the relevant template while the marking out is done.

The next panel along is larger and more challenging. A blank cut from litho-plate is abutted to the piece just installed and taped down tight to the curved undersurface. Its line along the belly of the aircraft is marked off from the template and the squared forward end scribed, taking special care to achieve precise conformity and scale clearance with the flap trailing edge. The outboard geometry of the panel is controlled by the rather sharp curve that the fillet trailing edge makes as it fairs into the fuselage, and this, it will be recalled, was in-built into the fuselage core structure, which thus acts as a convenient guide to marking out. By leaving this line full by a millimetre or so, the piece can be filed to shape after it has been glued in place (with contact adhesive) and suitably reinforced along its curved periphery with thin and penetrating superglue.

When doing this sort of work – be it for wing fillets, fuselage panels or anything else on the surface of an airframe – it is very important to appreciate that in a technical drawing a straight line represented on a curved surface is not necessarily straight when the surface is projected in the flat. Even on my third big model, I am still at a loss as to how to cope with this ‘scientifically’; instead I tend to ’fiddle it out’, with an adjustment here and there until the line looks right to the eye. To date, I have avoided disaster, but perhaps someone can advise me of a better way! For this reason, the remaining panels in the sequence become easier since they are not only rectangular but also very nearly flat, as shown in my pictures.

Finally come the inevitable rows of rivets and screw fasteners, which are emplaced as described in previous blogs. Despite the endless repetition, this detail work invariably comes as welcome relief. It may be mind numbing, but care and concentration are easier to sustain than any given high-stakes skill! 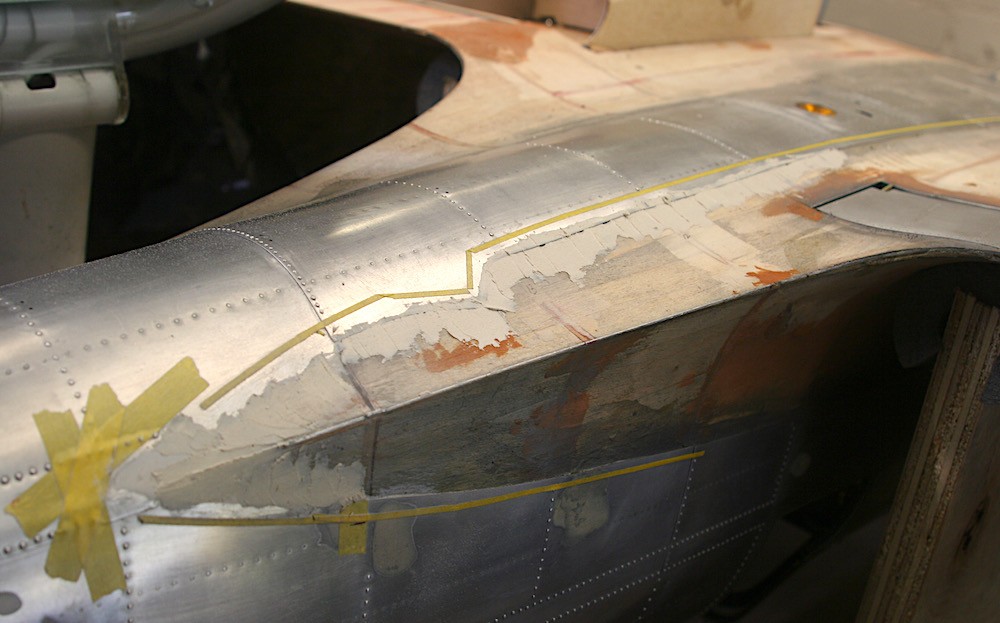 Filler applied (although yet to be sanded down) to 'soften' the sharp edges of the fuselage panels, which could easily show through annealed litho plate. The run of masking tape has been applied as part of a 'gross error check'. 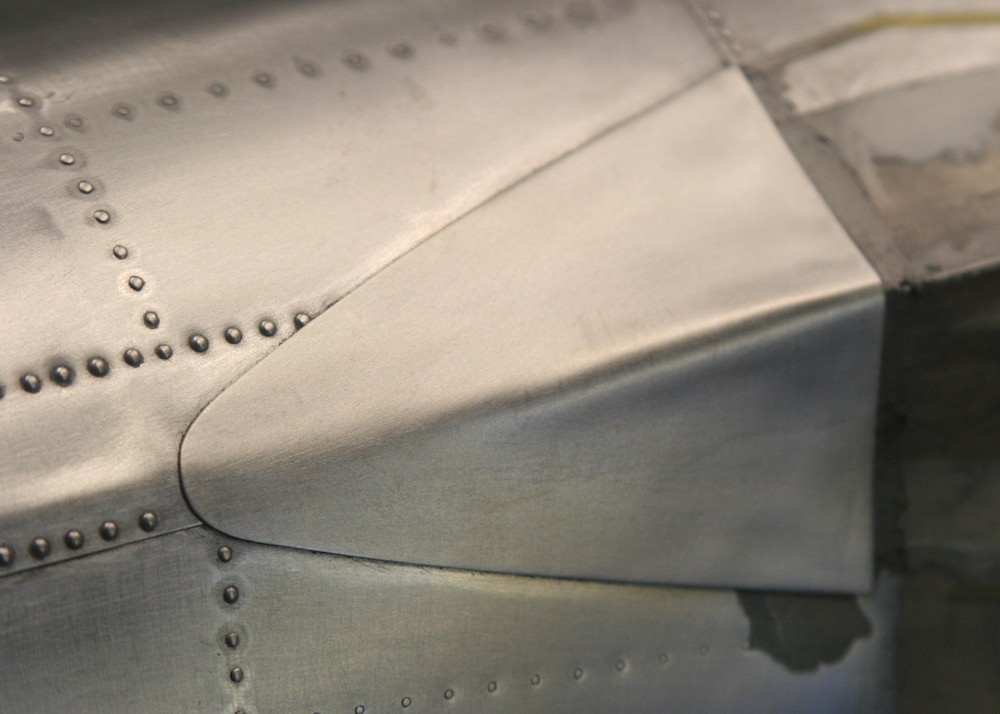 The first fillet panel to be applied forms the apex of the trailing edge and is the natural starting point. 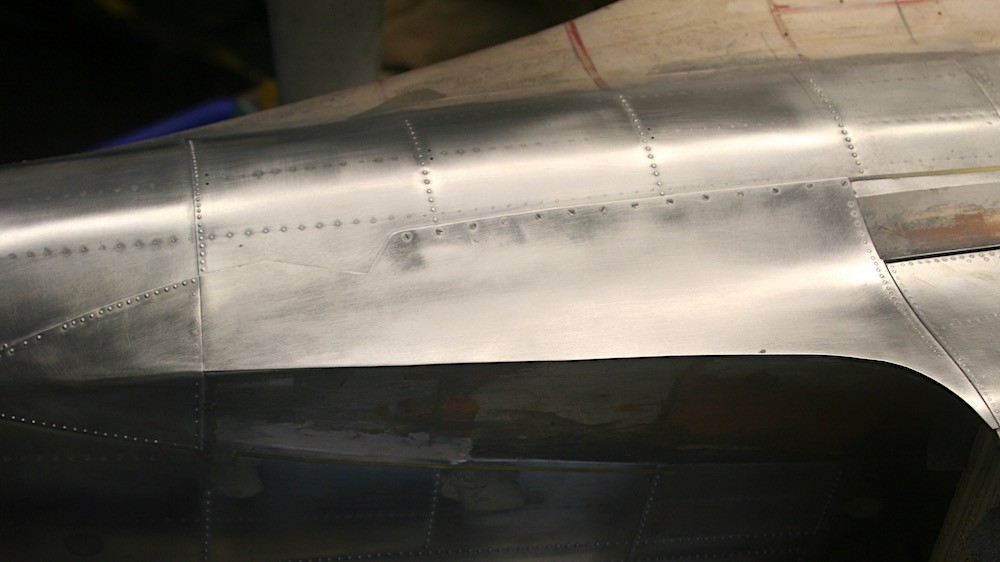 The completed second panel moving forward. It is especially important that it conforms accuratly to the line made by the flap trailing edge. 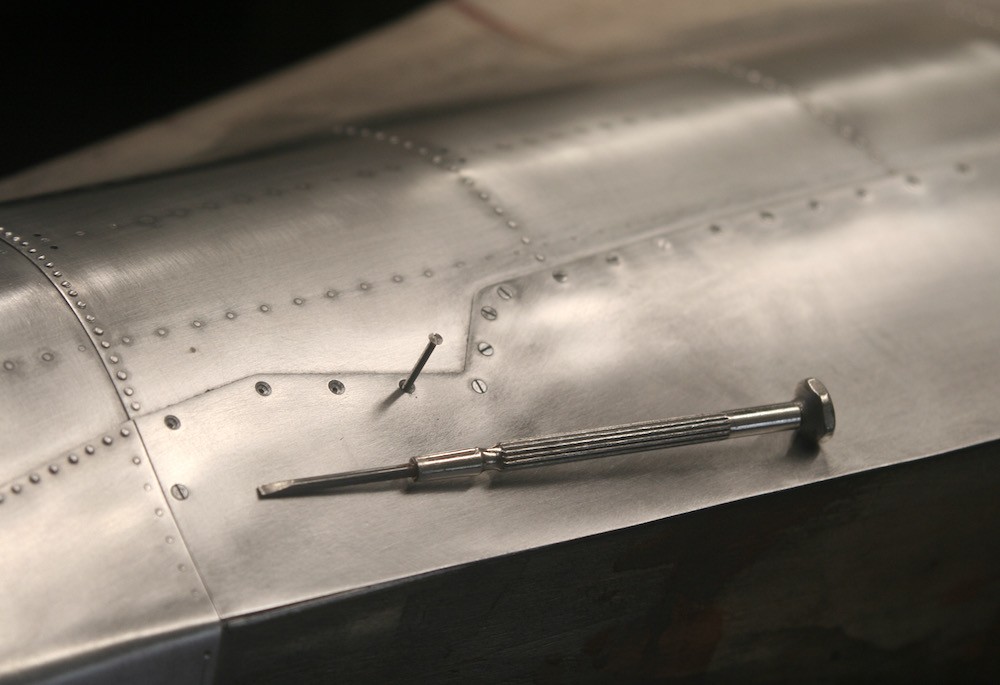 Rivets and fasteners bring the piece to life. The deep notch in the inboard side of the panel presents a trap for the unwary since it appears only on the port side. 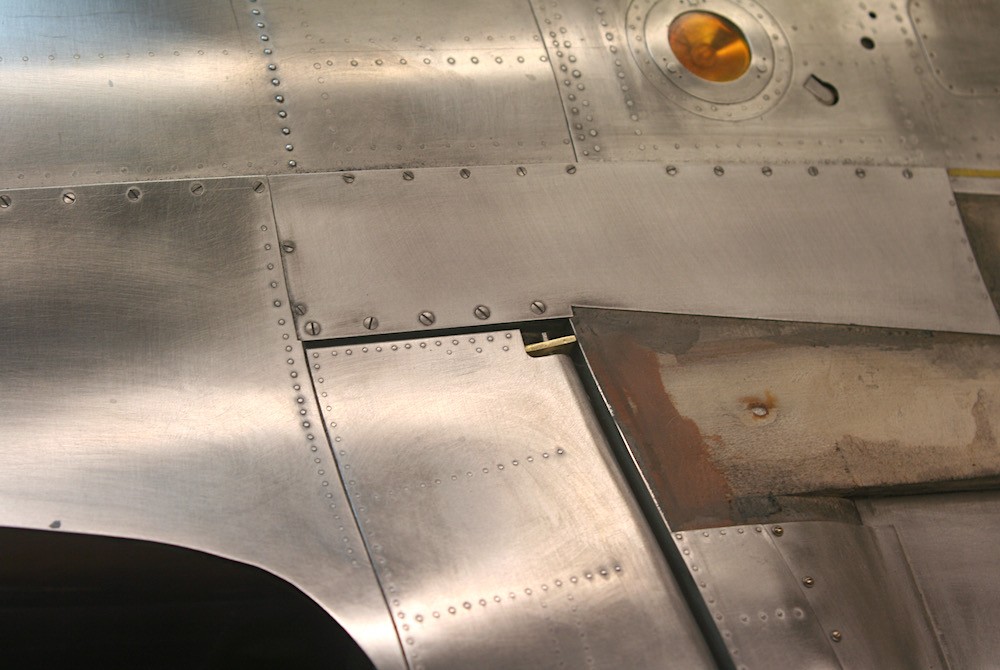 The fillet continues forward to the wing leading edge, but the shapes of the panels become easier along the underbelly.