The remainder of the wing skinning process is a pleasure to do. The panels are all strictly rectilinear and arrayed chord wise, perpendicular to the main spar – about as simple as it can get. And since the surface is close to being flat there is no annealing to worry about. Were it not for the three gun port covers with their various blisters and ejector ports, the entire job could be completed in a day or two! But nothing is ever that simple.

There are three blisters on the undersurface per wing, one for each gun, and while they vary in shape and size, they are all made separately from the panel in which they feature. I descried the similar operation required for the upper wing in my blog back in January this year, and the process for the underwing is no different; it just required three new formers (see photo). Indeed, it took longer to cut the formers in scraps of  3/16-in. alloy plate than to make the parts. I estimate that each blister took about twenty minutes to produce, which involves annealing the metal, pressing the blister through the mould, backfilling the cavity with rapid hardening car body filler, and then trimming to shape the narrow peripheral flange once the filler had set.

I used the moulds themselves to mark out the the openings in the respective panels, so as to be sure of a snug fit. The panels then serve to position the blisters, which are tacked to the balsa surface with a run of superglue. I took the further precaution to impress the narrow flanges down into the soft balsa substrate so as to avoid any slight bulge in the surface of the plate. With the panels glued down around them and the subsequent ring of rivets through the flanges, there is no change those blisters are going to move!

It is also worth noting that I made the machine gun covers both atop and below the wing of a slightly thicker aluminium sheet (0.5 mm), so as to achieve a subtle surface relief for the removable elements.

Before the covers can be installed, however, there are the shell casing ejector ports to worry about. In my first Spitfire model, I built the liners integral with the covers themselves, which took a lot of time and effort.  But since the current wing is made of solid balsa rather than expanded styrene as in the former case, I could take the easier course of cutting away the balsa to the required rectangular shape of the openings then lining the sides with scraps of litho plate. My photos show this clearly.  There is a small air flow baffle to be added forward of each shell port, but this will have to wait until all the ‘riveting’ has been completed.

The arrangement for the Hispano cannon is rather different in that the plate is much larger and fixed rather than being removable and secured by fasteners. The openings in this plate are also more numerous and varied, as my photo shows. But it was a very interesting and rewarding task, with each of the two plates taking about a day to build.

While on the subject of the gun bay doors, I should mention the pitot tube and its access plate which feature on the port side underwing.  I included a hardwood pad for the pitot way back in the spring of 2014 when I built the wooden substructure of the wing. Now it was a matter of locating the spot and drilling a 1/8-in perpendicular hole for a sturdy brass support rod. I cut a matching telescoping brass tube which will be embedded into the pitot stem when I eventually come to build it. 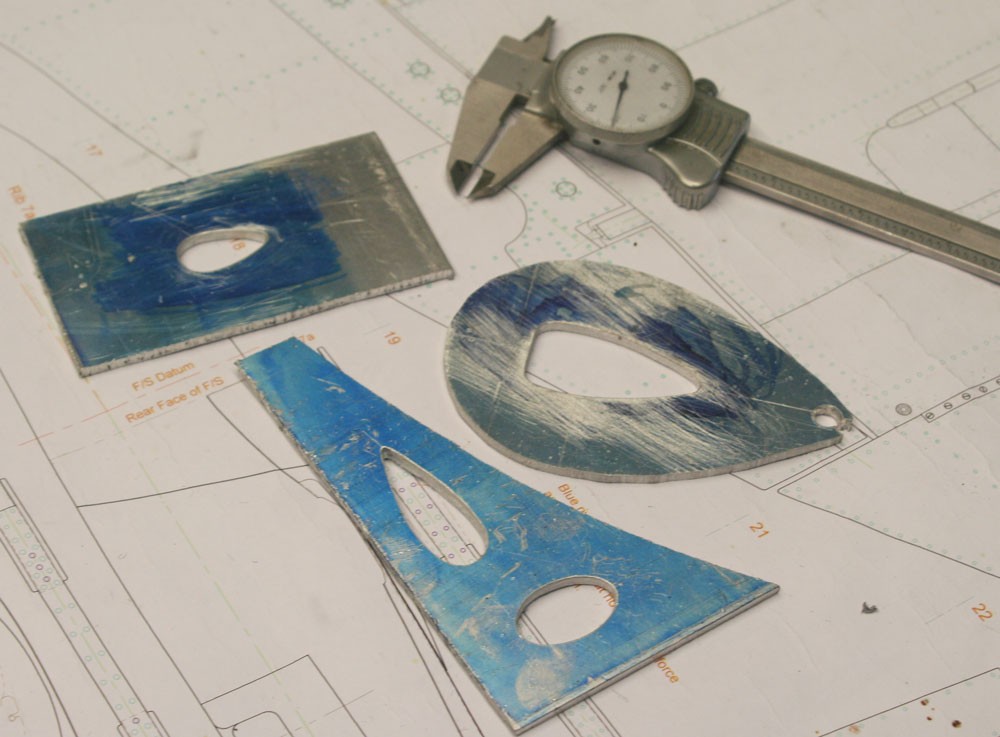 Blisters in the gun bay covers are varied in shape and size, but they are all formed by forcing softened litho plate down through these simple moulds. 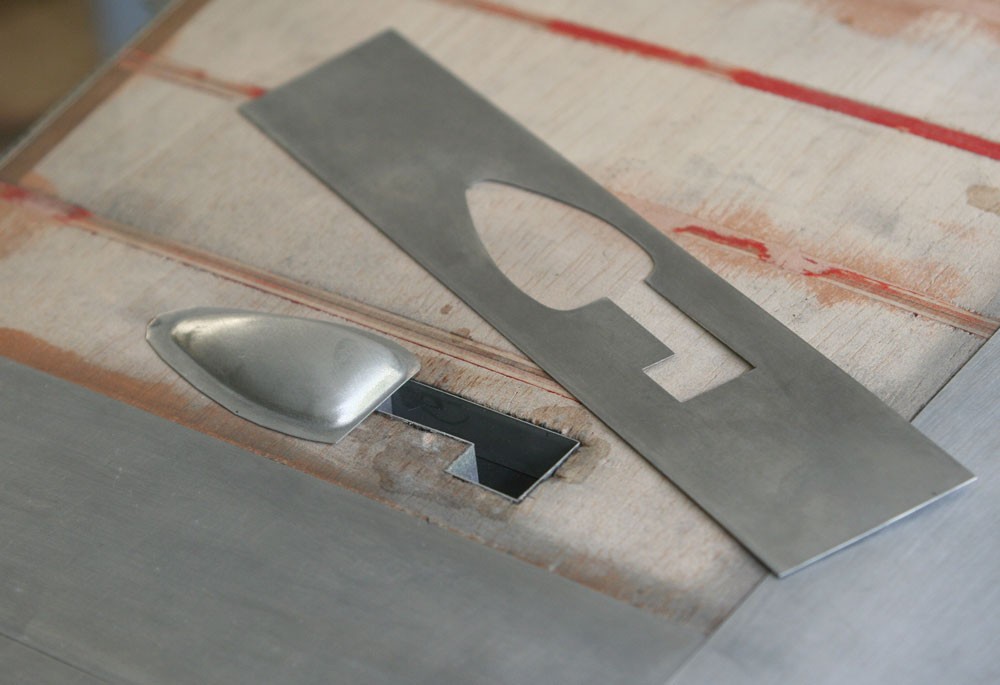 The gun bay covers as depicted in the model comprise of three elements: the blister the rectangular cover plate and the lined shell ejector port. 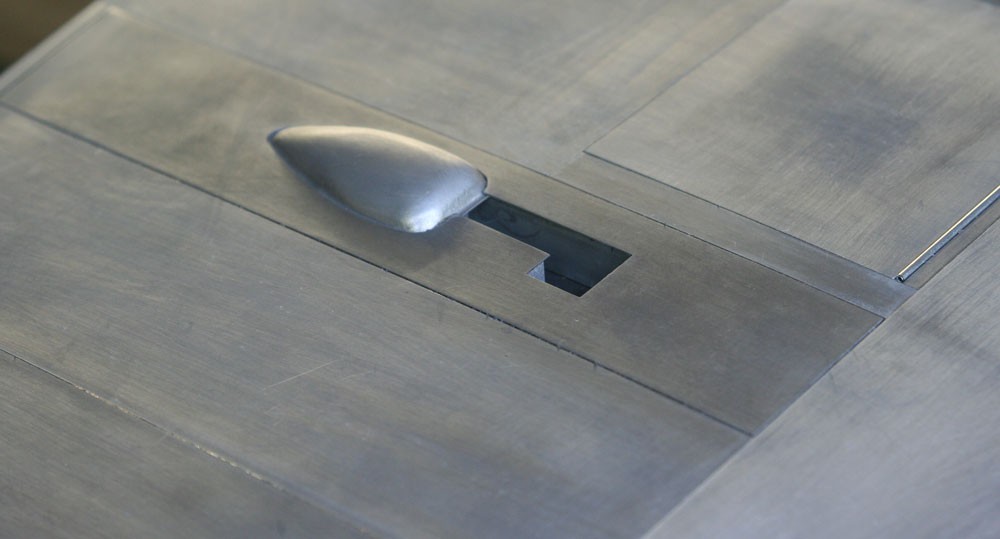 The port outer machine gun cover completed and waiting its rivet and screw fastener detail. This picture shows the slight difference in thickness between the removable cover and the rest of the skin. 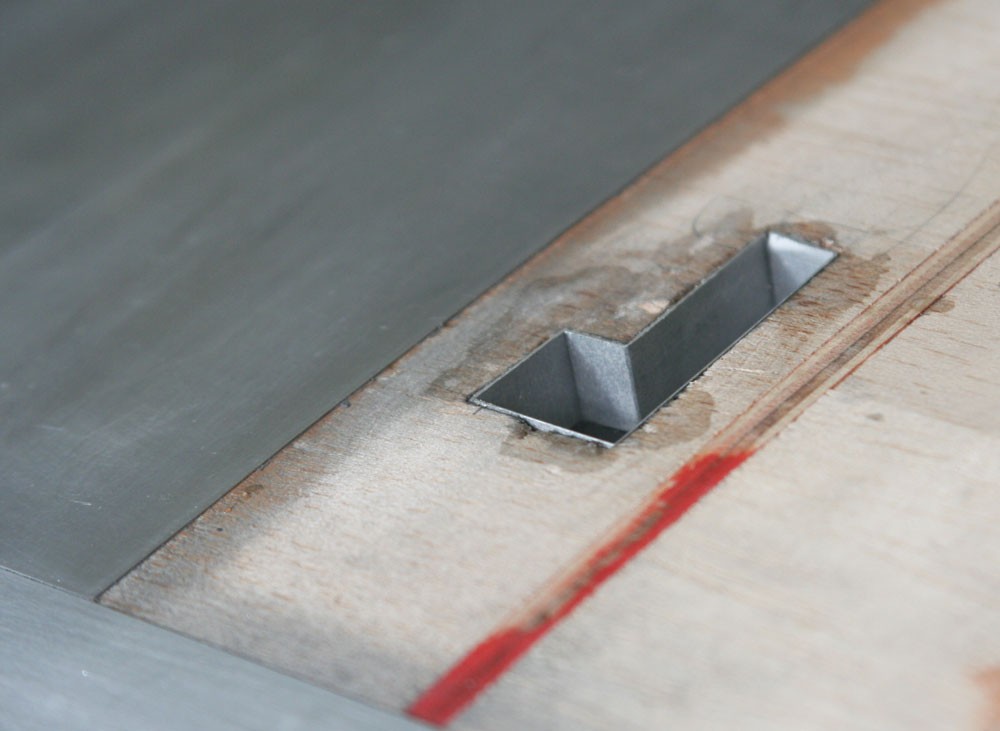 Close up of one of the ejector ports. The shape is cut out of the solid balsa wood and lined with L-shaped strips of litho plate. 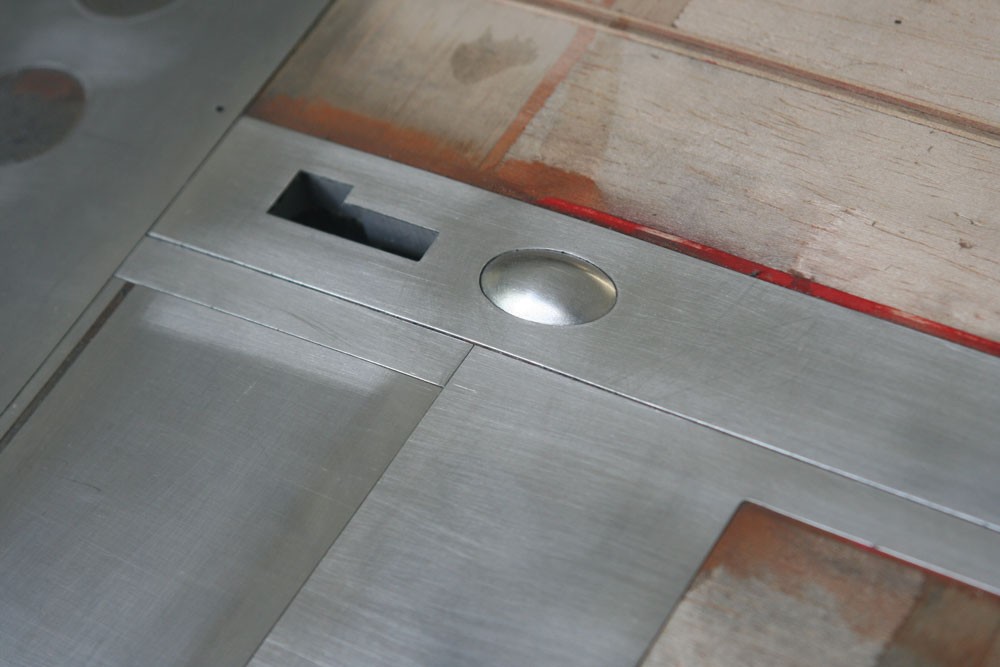 A smaller oval blister characterises the two inboard machine gun bay covers in the underside of the wing. 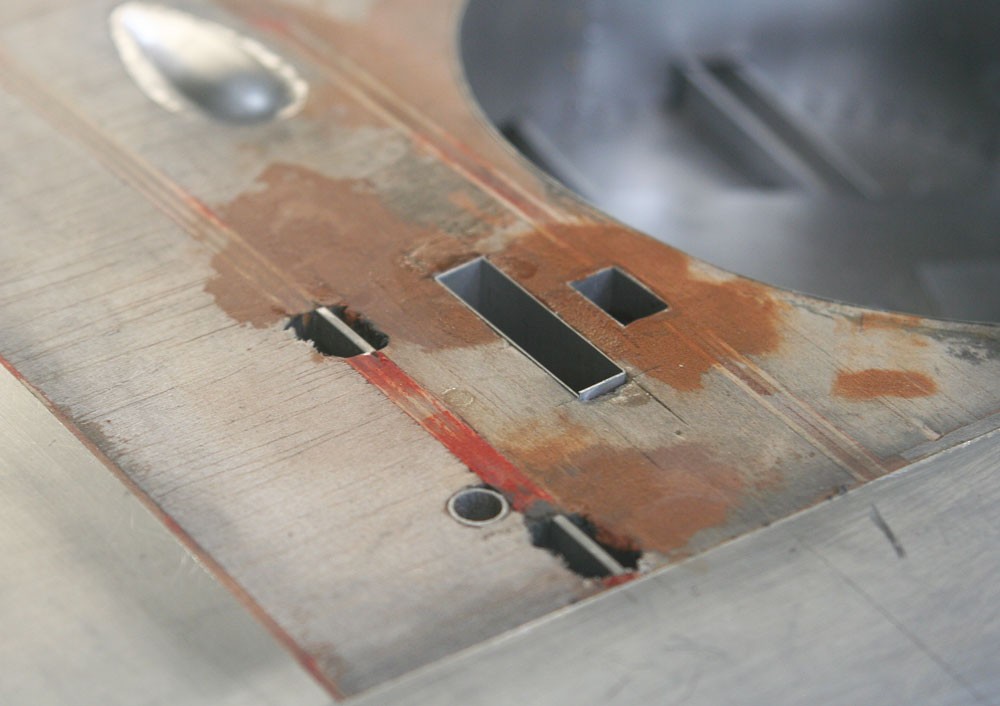 The skin beneath the Hispano cannon is pierced by more numerous openings.

The skin here is not removable except for the small round cornered plate which will have to be drilled for a set of small screw fasteners. 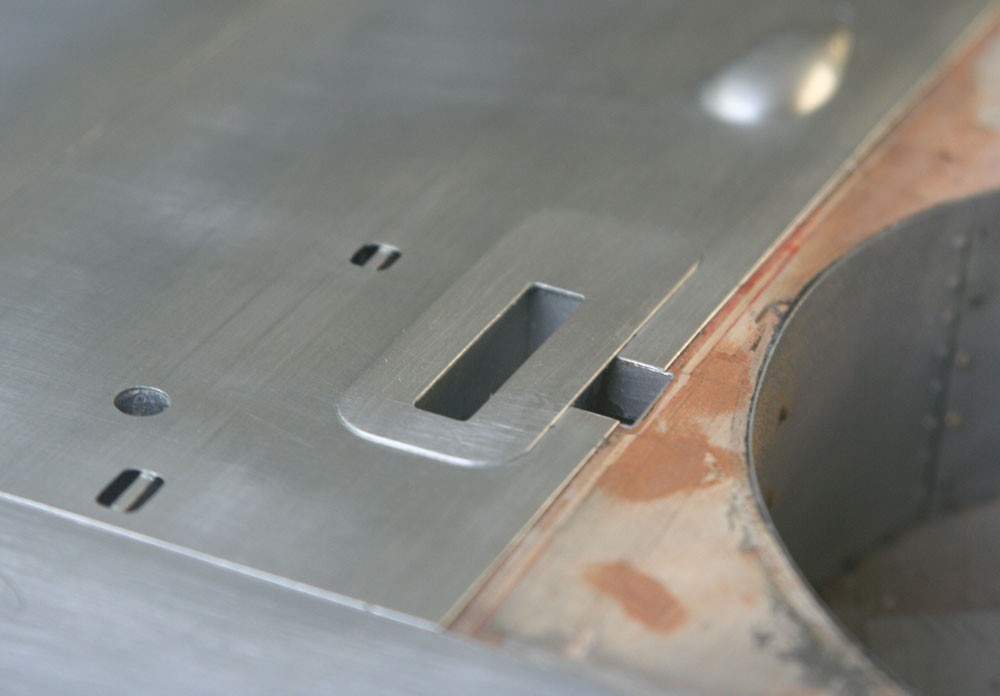 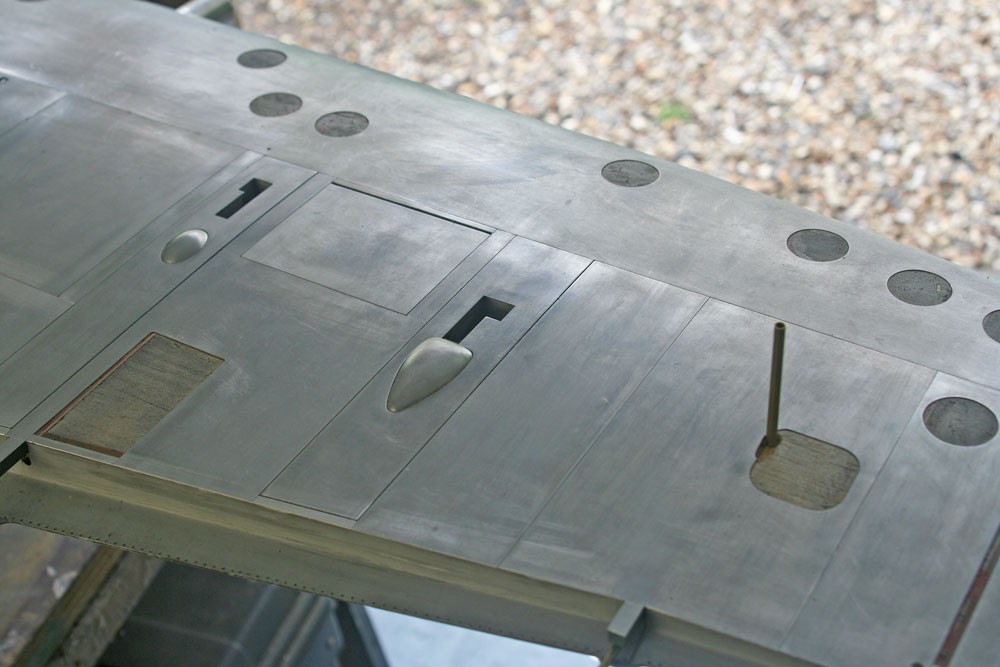 The outer half of the port underwing with the skinning almost complete excep for some inspection panels. The vertical brass rod is there to support the pitot tube assembly. 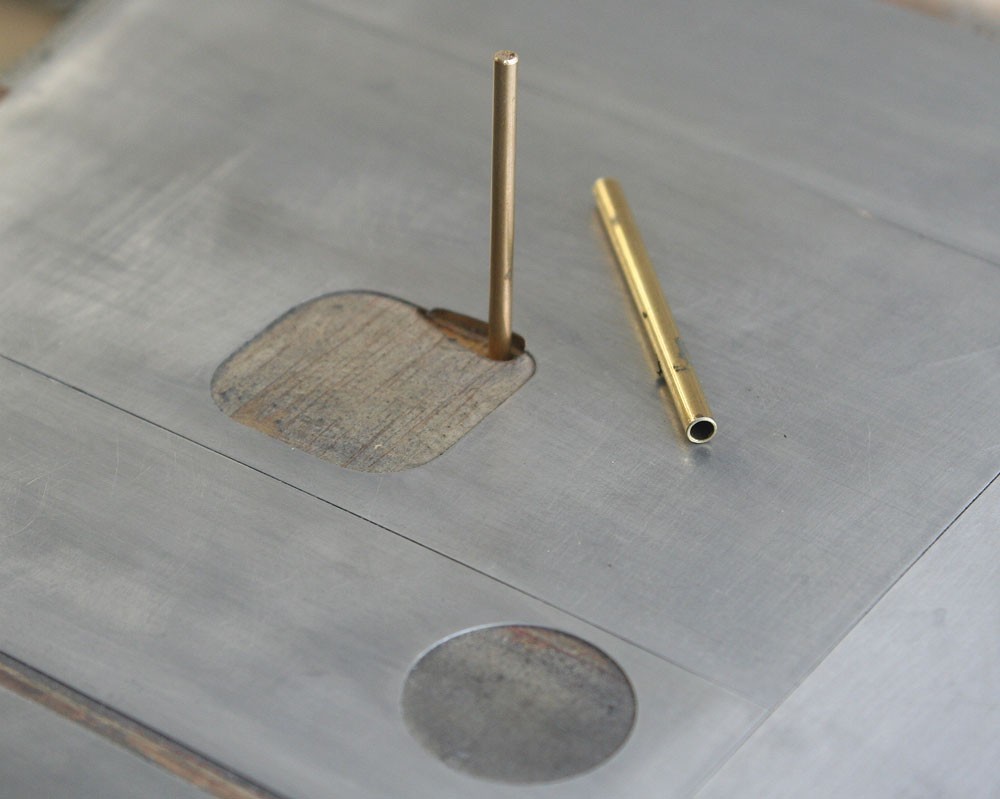 Close up of the telescoping pitot head support, showing the small tear-shaped recess created for it and the adjacent space left in the skin for the access door.