For those fortunate enough to have a computer and sophisticated drawing software, artwork for aircraft instrument faces can be done with mathematical precision. When I built my Spitfire, however, I had no such luxuries, yet the method I used works equally well, and arguably better.

The first requirement is good references, and in this case I photographed a full sized Spitfire panel that I stumbled upon at an air show. It was clearly a mock up, but the instruments themselves were genuine enough and I was able to capture them square on with negligible distortion.

From my photographs, I made photocopies, enlarging the image of each instrument in turn to up to four to six inches in diameter. The results were blurred but good enough to trace over using architect’s paper (which takes ink beautifully) and a Rotoring pen set with compass attachment. I found that the calibrations on the dial faces were best done with Letraset, notably those sheets containing lots of little dashes of differing weights and length. It is surprising how rapidly you can work around a calibrated scale, even the compass rose!

I also used Letraset for some of the lettering and numerals and with their huge range (at that time), it was easy to find a reasonable if not exact typeface match. However, part way through the job I found that it was just as easy to have the material I needed typeset at a bureau and use the old fashioned cut and past technique, as illustrated in the accompanying pictures. There’s no need to be ultra fussy, because when the artwork is scaled down, inaccuracies all but disappear.

Next I photographed the artwork using a Photo Mechanical Transfer (PMT) camera. This enabled me to reduce each piece of artwork to exact scale and simultaneously to reverse the image from ‘black-on-white’ to ‘white-on-black’. Before the digital age, practically every graphics studio in the land had a PMT camera, yet they are all but extinct today.

I turned the bezels from off-cuts of brass and alloy tube, but before assembly can begin, I need to add some colour. Reds and greens, of course, are commonly used on aircraft instruments; and returning to my references, I coloured in the white areas of the prints using fine-tipped marker pens. Because these inks are transparent, they are all but invisible if you get any over the black. As with the cockpit placards, a little muting down is beneficial at this stage: I gently dusted each instrument face in turn with dark grey pastel applied with a flat sable brush, repeating as necessary. This tones down the blacks and makes the whites just a little less strident. Also, not all instrument finishes are the same, so a little more toning on some than others, or a change of pastel shade ads subtlety to the finished job.

By this stage I had completed most of the painting. Aluminium and brass bits were primed with automotive cellulose before airbrushing with enamels. Again I varied the shades of grey to make the blind flight panel subtly different from its surround. Bezel shades were also varied, and some more than slightly: The oil pressure and temperature gauges have bezels of red and orange, respectively, and the tyre pressure gauge is green. I left the ‘Bakelite’ bits unpainted — very realistic fetched up with polish. Everything else got a sealant coat of semi-gloss varnish.

Now for assembly: I located each bezel into the corresponding hole in the panel, and dropped in the ‘glass’ cut from thin acetate. I created the instrument needles using white Letraset applied a second acetate disc, improvising arrowheads, centre-bosses etc., and touching up where necessary with white paint. The point of doing this is that I wanted the needles to appear raised up from the dial faces. Finally, I cut the instrument face itself from its sheet, trimmed it around and dropped it into place. Tiny blobs of masking fluid are a convenient way to tack everything together while checking that the respective layers are correct relative to each other and to the panel. Once satisfied, I carefully encased the whole thing from the back with five-minute epoxy, bonding contents to bezels and bezels to panel and sealing them in perpetuity! 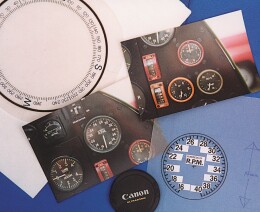 One of my reference photographs shown alongside a photocopy enlargement and two of the final pieces of 'artwork'. Note the lense cap for scale. 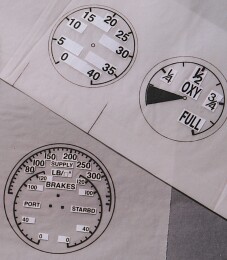 Some complex and straightforward examples, showing a combination of ink drawing, Letraset and 'cut and stick' used to create the instrument faces. The oxygen regulator (shown left) can be seen in its completed state in the picture second from bottom. 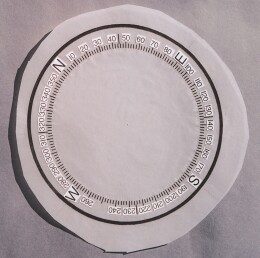 The compass rose, a job for a quiet evening requiring some patience. The 'artwork' is photographed and printed in negative, so that black areas become white. 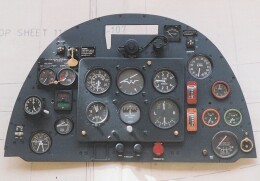 The completed panel just prior to installation. 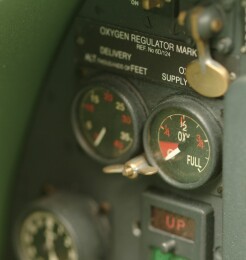 The results of a relatively simple method stand up to close scrutiny. Note the colour infill on the oxygen regulator as described in the text. The needles are laid onto a second acetate sheet to give added reality. 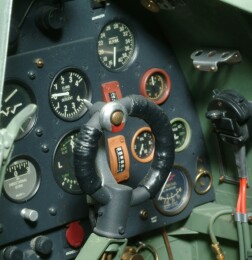 The subtle changes in tone achieved with pastels can be made out in this picture of the blind flying panel.