While building big has its advantages, it cuts down the options to ‘fudge’ the effects, and when it came to replicating the radiator of my 1/5 scale Spitfire, there was not a lot available ‘off the shelf’. The more I cast around for look-alikes for the mesh, the more perplexing the problem became. I never thought of trying to create the effect for myself until one afternoon senior management wandered into my workshop to find me labouring on the radiator faring.

“What are you going to use for the mesh bit?” she enquired mildly.

“Dunno”, I replied, reaching for a photograph to demonstrate to her the enormity of the problem. “It’s not even a simple hexagon honeycomb… more like chewed up pages in a book. I can’t find anything that even starts to look like it!” I gazed at the picture, despondently.

Eva left me to it, but as she turned to go a tiny light flickered on. I rummaged amongst my stock for some 0.004 in. black styrene card, and there and then on my bench began to score close spaced lines deep into the surface of the plastic. Stopping at around the ninth or tenth furrow, I turned the rule through 90 degrees and roughly scribed in some widely spaced vertical lines.

Held against the photograph, the altered surface of the plastic was crude, yet it bore an undeniable resemblance to the intended effect, and that after only a minute or so of work. What’s more, I could immediately see a way of take things a stage further: With just the tiniest dusting of aluminium buffing powder on a battered toothbrush, I scrubbed away vigorously at the scribed surface. Behold, the mesh effect intensified before my eyes, and with a pleasing hint of the metallic about it.

The proof of the pudding came a day or two later when I tried the technique for real. Starting with a sheet of card big enough to do mesh for the both sides of the radiator, plus a margin for mistakes, I began the tedious process of scoring. I started by using a Rollarule – a clever gadget that theoretically maintains parallel lines – almost but not quite on the slippery plastic surface.

As always in modelling cutting corners sometimes makes work: A better result was obtained the old way by taping the piece on my drawing board and using a set square against a fixed guide. I make a point of this because considerable care is needed to get the scribed lines equi-spaced (and believe me, it shows when they’re not). Yet with a little care and practise a passable result was fairly easily achieved. Next I marked the positions of the 30 vertical stiffeners, which were easy to scribe in.

The scribing leaves an almost imperceptible saw tooth effect that is actually beneficial. It also leaves some whiskers, so it’s necessary to gently clean things up with the finest gauge steel wool. This further lightens the already grey colour of the scarred plastic to good effect and helps bring out the detail – but, as always, don’t overdo it! The brutal multiple scoring also causes the plastic sheet to curl quite badly, but that is easily rectified by laminating the styrene onto some litho plate or thin ply with a smear of Evostick.

So far so good, but the ‘metalizing’ stage would prove the outcome one way or another. Wonder of wonders, the end result was more than encouraging: The texture became subtle and convincing; the greyed plastic took on just the right colour all of its own. A hint of metal made the lines jump out and gave extra depth. Yet somehow the overall effect remained a trifle flat.

The reason became clear from further comparison with photographs. In the real thing, the vertical stiffeners stand slightly proud from the rest of the mesh. Fortunately an easy solution was to hand. I happened to have some black plastic ‘Microstrip’ of just about the correct thickness. With a deep scored seating already made, it was easy to secure the strips in place with a sparing application of liquid cement.

When the whole lot had set, I carefully ‘faced-off’ the strips with fine grade wet and dry spread on a gauge plate. The Liquid Poly had completely wrecked the colour effect by leaving an unhealthy glaze wherever it occurred, so I used the toothbrush again to reapply more alloy powder.

The result was all I could have hoped for. It’s just not possible to get quite enough horizontal lines per inch, but the ‘effect’ was about right, and that’s what matters.

And when the outer framework was added from strips of litho plate tacked on with thick cyno, things got even better. A hint of foxy red pastel here and there, and I called it a day…

In all, about six hours’ work to simulate both sides of the radiator matrix, and not even the need to reach for the airbrush. A job I’d though impossible turned out to be reasonably easily accomplished with materials readily to hand.

Slight of hand? Maybe – but it adds up to a whole heap of satisfaction. And isn’t that what model making is all about? 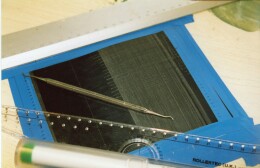 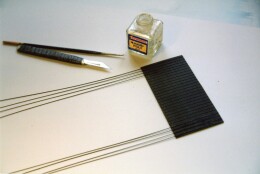 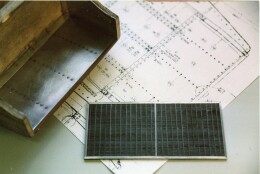 The frame has been created from litho plate. 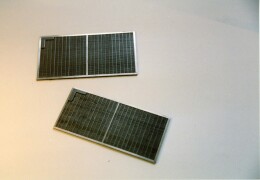 A second panel for the back of the radiator 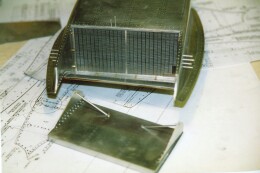 The assembly installed inside the Spitfire's radiator fairing 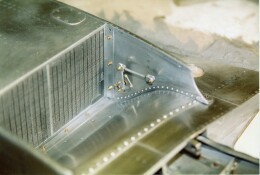 I seems to look good from any angle 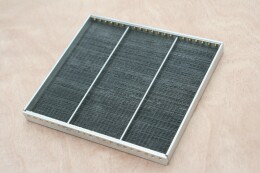 Same technique, different model: This is for a P51D 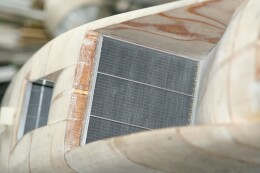 The finished panel installed in the Mustang's 'doghouse' prior to skinning the fuselage.