Like numerous WW2 aircraft, the Spitfire’s rudder and elevator are fabric covered, and the stringing used to secure the linen stands out like veins on an old man’s hand.  In large-scale models, this can hardly be ignored. Even the crimp-edged fabric strips that are doped over the top of the stitches need to be considered, so there are two separate challenges here.

Let’s take the stringing first: In building my Spitfire I briefly entertained the idea of attempting to replicate full-size practise. I had been shown the technique by Derek Pope at the Aircraft Restoration Company at Duxford who kindly gave me a copy of the official MOD notes on fabric repairs (AP 119A-0501-16, Chapter 8). Yet the more I studied the complexities of the knot, the more I concluded that this was at best unnecessary and at worst a mistake. Sometimes, less is more, so I decided on a compromise involving a bit of honest model making deception.

First I fashioned a simple jig from a six-inch long off-cut of 1/8 in. styrene sheet. I made three or four deep notches top and bottom and about twenty down each side, the latter to the scale pitch of the knots.

Rib stringing used to be, and as far as I know still is, done with waxed string, wonderful stuff that combines strength with pliability and durability. My father was in the aircraft industry for most of his working life, and the wax string that found its way home was put to many uses. I’ve even got a few vestiges left to this day, so there was no problem in gauging the scale thickness of thread to use.

I started by fastening a length of double-sided tape, sticky side upwards, to the face of the jig. Then, with the notches as guides, I wound my thread thrice length-wise, then cross-wise down its length until I had a sort of elongated noughts and crosses grid of thread over sticky tape.  At this stage it pays to impress the whole lot down firmly into the tape using the flat of a steel rule. Now for the crucial part: I carefully marked 1 mm either side of the longitudinal threads and, with steel rule and fresh scalpel blade, made six firm cuts, using pressure on the rule to prevent the tiny cross threads, which represent the stitches, from going awry. The result is three ready-made stringing runs.

It is now possible to measure off and cut a length of the double-sided tape, complete with embedded thread, lift it carefully from its backing with the point of the scalpel and transfer it to a pre-marked line on the model. It’s easy for the little ‘stitches’ to get a bit askew, but they can be teased back into position with the knife-point or a needle.

The next stage is to apply the rib tapes, which opens the second chapter in the saga: The challenge here is that these fabric strips were invariably crimped to prevent fraying. Since nothing I tried came near to producing an acceptable job, and I quickly realised that I would have to go hi-tec, but where? During a search that spanned most of the early summer of 2003, I investigated vinyl-cutting services across London and East Anglia, yet none could guarantee the fine detail I needed. Finally, in my local Yellow Pages, I came up with a company in Cambridge who produced, among other things, laser cut ceramics for the local ‘Silicon Valley’, and I went to see them.

“I’m a model maker, and I need rib tapes cut for a large scale model Spitfire,” I explained to the receptionist, trying to not to sound cranky. Fortunately, I had with me a CD containing a pdf of my ‘art work’– essentially two jagged lines representing the edges of the tape at the correct distance apart – but it was enough. These people could not have been more helpful. They downloaded my pattern, and after some scrutiny concluded that the detail would not be a problem. The stumbling block was the material I wanted to cut. I was insistent on using Tamiya masking tape, knowing from experience that being thin and flexible it would snug down effectively over the stitches. But the stuff was simply too flimsy to cut without some form of support. After some teeth sucking, someone suggested a substrate of thin acetate, and there and then we put together a trail run using some tape I had brought with me.  It took about 20 minutes to set up the machine, but the laser cutting of a test piece took only a minute or so. When I peeled the finished article from its backing I was more than pleased with the result.

I got home clutching a sheaf of A4 clear acetate sheets and immediately enlisted the help of my wife, Eva, to adorn them with abutted strips of 18mm width Tamiya tape. We got through three reels of tape, but I ended up with enough perfect little rib tapes for two Spitfires. I was more than happy.

Inevitably, the caveat to all this is that it is costly. It also requires access to a computer and appropriate software. I used Adobe Illustrator create my art-work, working directly from a scanned image of a piece of crimped fabric given to me by Derek Pope, so I have the satisfaction of knowing that the result is accurate. Not all model makers will have this type of kit, but many will, and so I hope these notes prove useful. 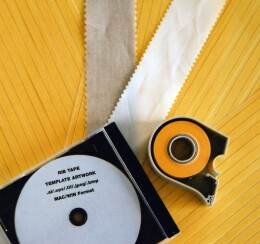 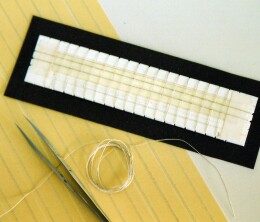 Rib stringing made easy: Thread is wound around a simple gig onto double sided tape. 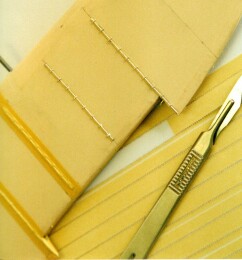 The stringing runs are cut out with a sharp scalpel and transferred to the model. The crimped rib tapes are then applied over the top. 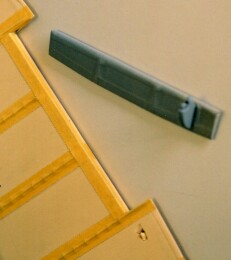 Detailed in the same way, the elevator trim tab has been sprayed with grey primer. 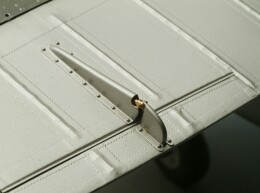 The finished result after painting to simulate the silver dope used on RAF aircraft. 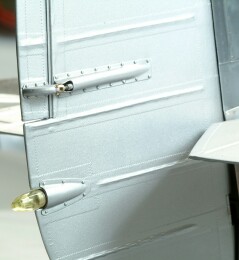