A question frequently asked by those who have seen my model during its construction is: “where do you buy all the little bits?” - an assumption doubtless rooted in the success of the model kit market over the last 50 years. Yet in truth, the only components of the model that I have so far needed to ‘outsource’ are the bubble canopy and the spinner, since both require expertise beyond my means.

Metal spinning is a skill, and one that requires heavy kit rarely found in the model engineer’s workshop. It may be possible to achieve some sort of result using a home lathe, but I know of no one who has done it, and have no intension of experimenting. Even the briefest search of the Internet reveals a plethora of companies offering industrial-scale metal spinning, but few likely entertain the one-off needs of a model maker.  I was slightly daunted until it occurred to me in May this year that a good place to start would be DB Sport & Scale. I knew from experience that the splendid flying model aircraft kits sold by Eddie and Judy Stocker featured finely proportioned aluminium alloy spinners because I had adapted one of them for my big Spitfire model. Within days of my email asking if they could recommend a supplier back came the response: “We use Nick Bainbridge of Janus Metal Spinning… He is a very obliging chap.”

How right they were. Nick could not have been more helpful. A telephone call was all it took before I was on my way to the Warwickshire town of Leamington Spa with my scaled NAA drawings of the pointed end of the P51-D.  The workshop tucked away under blackened Victorian railway arches was just what I was looking for. What it might have lacked in conventional modernity, it made up for in the quality and variety of work, including full-sized spinners for flying aircraft. Nick agreed to turn a former from my drawings and produce two aluminium alloy shells to a basal tolerance of +/- 0.5mm. As it turned out, the spare proved an extremely wise precaution!

A month or so later I was back in Leamington Spa to collect the finished parts, which were worth every penny I paid for them. Once back home I devised a mandrel for my lathe and turned an inch-thick MDF blank on which to mount the shell for what I anticipated would be a simple machining operation – to part off the boss section of the spinner from the demountable cone.  Perhaps I misjudged the machining qualities of the metal; perhaps I had the spindle speed and/or tool set wrongly, or it was insufficiently sharp, for part-way through the cut the tool dug in with predictable consequences. Unbelievably, take-two fared no better, and thus within thirty minutes I had reduced both my beautiful shells to a buckled mess. At first glance it all looked like an irredeemable disaster, but not quite. By sheer luck, where the damage during the first attempt had gone to the skirt, the second attempt had ruined the cone. It is testimony to Nick Bainbridge’s skill that the base of one matched the top of the other, and I was saved by a hair’s breadth from my own folly.

The pictures illustrate the rest of the story: I had to mark out and cut four openings to accommodate the propeller blades, create an access door (using a matching part from the discarded shell) and there was a certain amount of rivet detail to include. I left the MDF blank in situ within the saved bosses section and added a further turned tier of MDF to act as an internal seating for the nose cone, which is fastened to the base by sixteen, 12BA brass countersunk screws. This departure from the original - which employs four internally accessed studs –was dictated by the need to be able to easily de-mount the prop for crating and transport once the model is finished. It is one of the very few occasions where I have consciously compromised surface detail. 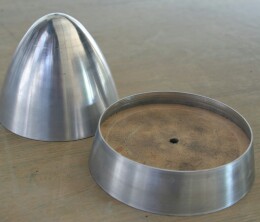 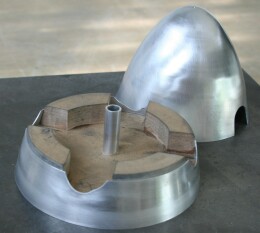 Four airscrew ports have been cut and further pieces of MDF added. These will be drilled to take the screw fasteners holding the two spinner assemblies together. This was a deliberate and rare departure from the original. 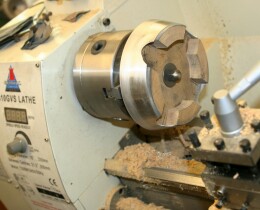 The assembly re-chucked to true up the trailing edge. 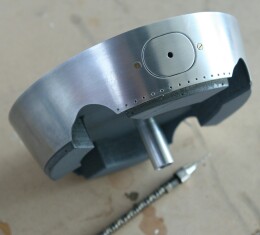 Further detail in the form of an access door. The discarded part was used to make this. 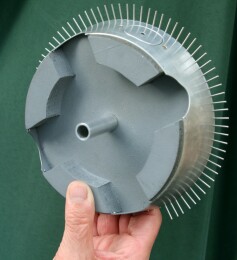 A fringe of alloy rivets, prior to their being clipped and sanded flush. 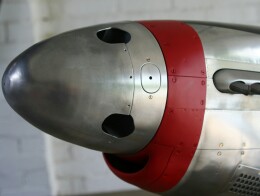 The completed sub assembly in place prior to painting.