Around mid-July I finally managed to permanently install the left hand control consol into the cockpit, a job that for many months had been awaiting dry transfers for two prominent information placards for ram-air and undercarriage retraction control. Among other things, the console houses controls for the flaps, undercarriage, rudder, elevator and aileron trim tabs and bomb release. I made the entire thing as a sub assembly that locates onto threaded studs on the left hand fuselage side. These fastenings are conveniently concealed under the two dome shaped inspection plates. Several control rods are visible emerging from under the consol and they were easily made from aluminium tube.

I estimate that 90% of the work in the cockpit is now done, the major component outstanding being the pilot’s seat. I also have to make the K-14 gun-sight, radio range control and a few other minor items, including a pair of cockpit interior lights, which are mounted on the shroud flanking the instrument panel.  I have no drawing of this last feature, but thanks to Joe Kennedy, engineer at the old Flying Machine Company at Duxford Airfield, I have been able to measure and photograph the real thing. Thanks, Joe – another hurdle overcome!

My photographs here show the state of the cockpit as of August 2011. The hours spent on creating and applying the many labels and stencills are not recorded but can well be imagined. 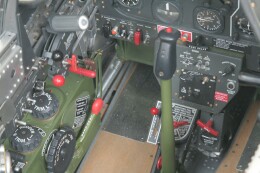 These two images show the left hand side of the cockpit with the control console newly installed, hopefully permanently! 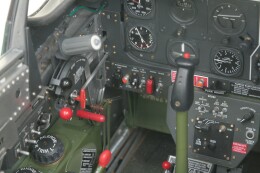 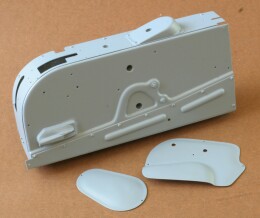 The console as it was two or three years ago. The two inspection covers are made of softened litho-plate dished over simple hard wood formers. They now serve the practical purpose of concealing the studs used to fasten the sub assembly to the cockpuit side wall. 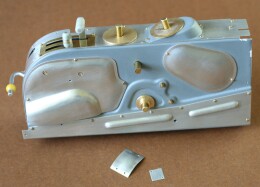 A start has been made to add some of the detail, including boost and ram air controls.

The console shortly before installation. Note the articulated undercarriage selector lever located beneath the large trim tab wheel. It is made out of several pieces of brass. 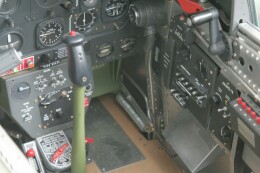