The serial numbers, codes and national insignia for my P51-D all required accurate masks, and I struck lucky in finding a supplier on the Internet willing to cut them for me. Mal Mayfield is an aircraft model maker who, unable to find the spray painting masks he needed, decided to try making his own. From this tentative beginning he learned by trial and error, and has developed a cottage business with his own marketing website and a first-class product.

I spent time drawing up the stars and bars on my AppleMac from official NAA data, but need not have bothered. Mal had already done the exercise and had only to enlarge his files to 1/5th scale. I supplied him with clear square-on digital images of the aircraft’s codes and serial numbers that I had taken myself at Hendon, and he reproduced them very well too.

Like me, Mal was pushing the envelope. Accustomed to supplying plastic modellers, he had never made masks for giant-scale aircraft before, but he was keen to give it a go. We agreed to start with some tests and Mal despatched an assortment of old masks in various sizes for me to experiment with. He also provided detailed instructions. I did the tests and we discussed the results on the telephone. We were both confident that the system would work with minor modifications to cater for the large scale.

The letters and numerals were straightforward. Mal cuts his masks using a state-of-the-art plotter and high quality self-adhesive material, which is peeled from a backing sheet.  Even though the masks are just 8 microns thick, and my largest letters were over four inches deep, they were relatively easily transferred to the model. I took special pains to burnish the edges down onto the metal skin, and was rewarded by virtually no paint creep, even on the rudder where fabric fasters and tapes leave numerous lumps and bumps.

The insignia were less easy because of the two colours involved. I decided on the following sequence: 1. transfer the entire mask composite to the model using a tacky transfer sheet provided with the kit; 2. remove (weed-out in Mal’s parlance) all internal elements, leaving just the outline; 3. spray-paint the primer coat; 4. spray the white coat; 5. replace the combined internal elements; 6 remove the blue component; 7. spray the blue coat; 8, remove all remaining masks.

While easily listed, some of these tasks needed extreme care. The superannuated scale of the job made things more difficult, not least in devising a way to control a large sheet of flimsy, sticky material sufficiently well to guarantee accurate positioning. I found the use of spare backing sheet taped to the job helped considerably with this. A lapse of concentration is heavily punished. Once, when the time came for me to reinsert the star and bar elements over the top of the white coat, I discovered they refused to fit. This floored me completely, until after considerable head scratching I realised that I had got the original mask on upside down! The bar on the US insignia does not pass through the centre of the circle! I paid for the error by having to paint-strip and re-polish a large part of the fuselage starboard side.

It is not immediately obvious that the insignia on the wing of a P51 is larger than that on the fuselage, and this tended to compound the added difficulty of controlling and positioning the masks over a horizontal surface. There was also the difficulty posed by the small fairings covering the aileron linkages, which interrupt the line of circle. Again I need not have worried: with a little trimming away of excess material, the masks snugged-down over these nicely.

As with the black spray painting (described previously), I judiciously cut back and polished the paint surface with T-Cut and was rewarded with an improvement to the finish that is as much tactile as visual. Overall, I’m satisfied and relived with the result so far. Mal Mayfield’s masks gave everything I expected of them; if I have a minor regret it is that I believe my attempt to match USAF insignia Blue with a home-mix based on Precision Paint’s Prussian Blue, is a tad on the dark side.  Notwithstanding that, the aircraft in its war-paint looks very handsome indeed. 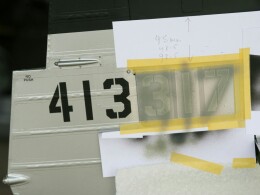 The masks performed beautifully, even on the uneven fabric surface of the rudder. The fin serials are about to be sprayed on top of the etch coat. 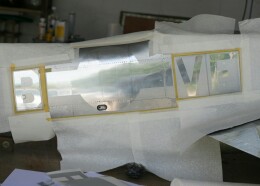 The fuselage masked for the codes and national insignia (stage 2). Spot the deliberate mistake! 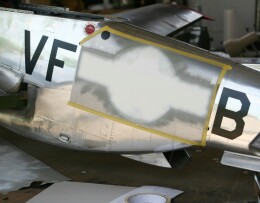 With the black code letters done, work on the port side has progressed on the national insignia to Stage 4, the application of the white coat. 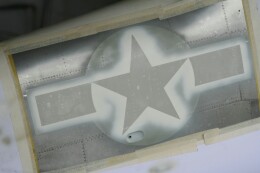 The error on the starboard side of the fuselage has been corrected, and work has progressed to Stage 6, ready for the blue. Note by now I had learned to avoid spraying white to the edges of the masked area to prevent white 'hairlining' beneath the blue. 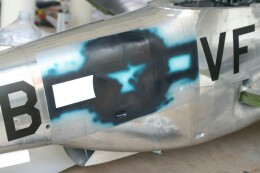 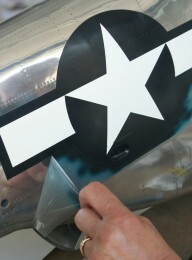 Above and below: The final stage is always the most rewarding: Eva peels off the remaing masking to reveal the finished insignia. 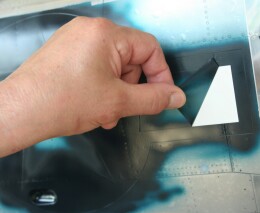 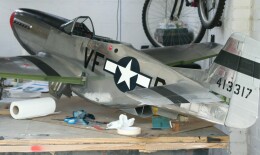 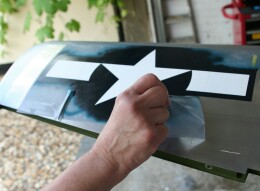 The same operation on the port wing. Note the protruding fairing that cuts the circle of blue. A clean job thanks to the flexibility and good adhesion of the masking material. 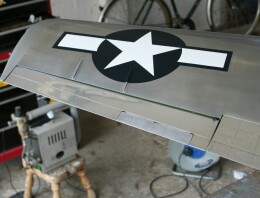