Welcome to my P-51 diary

I began work on my 1/5 scale P-51D in March 2005, and it has occupied the greater part of my leisure time since. For that I must thank Eva, my wife, who has shown the tolerance of a Saint throughout. I only hope that in the end the model proves worthwhile, for the countless hours I have invested in add up to time together lost for the two of us.

While much has been achieved, there is much still to do, some of which I hope to record within these pages. The act of writing down my progress, however sketchily, will have its recompense, for I hope to produce a book in due course, and I am a poor note taker when it comes to model making. Even should my Internet diary amount to little more than a string of captioned images, it may at least serve to fix the landmarks for me to navigate by later; and if it happens to offer pleasure and interest to those who stumble upon it, then the effort will have been worthwhile.

I take up the story with two big pieces of model on my bench – the main plane and the fuselage – both by now unmistakeably Mustang! I estimate there’s probably a year, perhaps two, before the two are united, for while the wing is mostly complete, bar upper surface rivet detail, and much of the fuselage internal fixtures and fittings have been made, dry fitted and stripped out again, there are countless other tasks yet to do before the marriage can happen.

I was humbled recently to stumble on www.cebudanderson.com/quaterscale.htm. Dana Muelot’s 1/4 scale ‘Old Crow’ is little short of a revelation. It’s not so much what you can see that inspires, and that is truly remarkable, but the method adopted to get there, which from the photographs is a step away from full size practise. Dana, I take my hat off to you!

My approach is fundamentally different, for while I hope my model in its completed state will stand scrutiny, its beauty is only skin deep. My skill, if I am judged to have any, comes in slight of hand… What you see looks like a Mustang; what you can’t see doesn’t… the trick is in hiding the join!

I’m not going to recap on my progress over the last five or more years. My pictures will have to speak for themselves. Suffice it to start the narative in June 2009 when I finally grasped a nettle that I’d been dreading, because that gives me a chance to pay tribute to a fellow model maker, and a very fine one at that.

Anyone familiar with the P-51D will know that the instrument panel is surrounded by a tent shaped shroud. I have the NAA drawing. There’s a lot going on in the shape and it has stiffening flutes on both sides, which are visible from underneath as well as above. It must fit snugly around the panel and conform to the slope of the windshield and curvature of the fuselage skin – a challenge!

Making the thing from aluminium sheet was beyond me, which left the vacform option. But I do not have a vacforming machine, nor any experience with the technique.

Enter Bill Bosworth, truly a ‘Master Scratch Builder’*: In a couple of relatively short ‘how to do it’ emails from his home in the USA, he convinced me to climb Mount Improbable! I not only knocked up my own vacforming box in about four hours and for less than £30, but in the same weekend – and after a few abortive attempts – produced a creditable vac formed shroud from a piece of 30 thou plastic card!

I think Bill was a chuffed as me. He commented afterwards that I was the first disciple he had converted. Bill’s method is about as basic as you can get, requiring only a simple wooden box, airtight except for the perforated top, a simple matching timber frame on which to tape the plastic sheet, a domestic vacuum cleaner and the kitchen stove! The photographs should clarify at least some of this.

The tough bit is making the pattern. There's no way round that, and it took me days of painstaking work, mainly to ensure accuracy of fit.

There’s a lot written about vacforming. Commercially purchased machines are expensive, particularly if you use them only rarely. Even the DIY kit I’ve seen described is relatively elaborate. Bill’s message is that it doesn’t have to be so, and I hope I can help him prove it, albeit on the basis of one job completed successfully by a beginner!

If anyone wants more detail of building the box I can help, because I’m sure Bill won’t mind me promulgating his methodology. But essentially all you do is to place the pattern onto the box (propping it up by an inch or two to give an undercut) and hook the vacuum cleaner up to the box. Then tape 0.040 in. styrene sheet (I risked 0.030 in. to get a sharper definition around the stiffening flutes) onto the timber frame and put that into the oven at 250 degrees F. After a minute or so the plastic starts to droop and get wobbly like a blancmange. At that point you switch the vacuum cleaner on and smartly drop the frame down over the pattern to engage with an air seal around the box. There’s an almighty sucking noise and in a trice the plastic, like magic, is drawn skin-tight over the pattern, hopefully replicating its every contour and detail.

Well, it took four of five goes (just as Bill said) but the result was worth the effort, which on the scale of things was relatively minimal after all. It can help to drill a few holes through the pattern to assist the evacuation of air. I tried it with and without, and the holes did make a difference.

The pictures show some of the stages I’ve attempted to describe. The fun came in embellishing the finished piece with its air and demister ducts, rubber moulding, and sundry structural items including furnishing for the K14 gun sight and spare cockpit light bulbs, both of which I made from thin aluminium sheet, using the appropriate NAA component drawings to guide me.

*Bill Bosworth’s work along with that of a distinguished company of talented model makers can be savoured in the book Master Scratch Builders, edited by John Alcorn and published by Schiffer Military History. 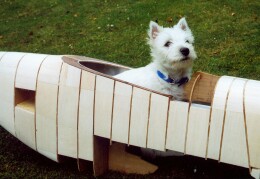 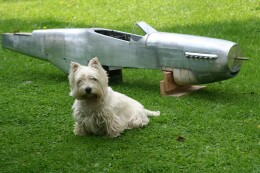 Meet Bonnie, my young test pilot. She has aged a little by the time the alloy skin had been applied! 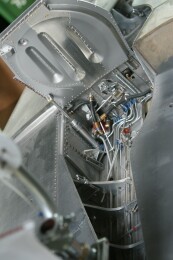 I'm now in my fifth year with the model, and I estimate that work on the wheel bays has taken at least two of them! Here I'm test fitting the main gear doors. There are still odds and ends to finish off in this area, but this summer I've been concentrating instead on completing the instrument panel and – by way of variety – on the riveting of the upper surface of the mainplane. 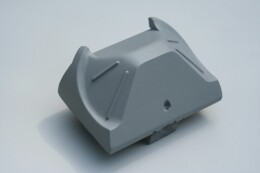 Vacforming turned out to be the only way to create these rather complex contours. But first the pattern, which I carved out of a block of mahogany. 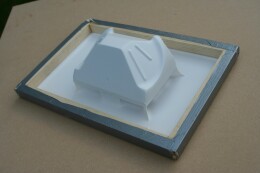 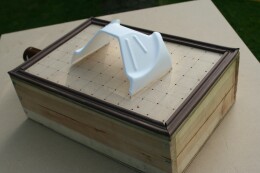 The vacform box could hardly be more simple. Note the airtight seal which is made from domestic draught excluder. The styrene sheet is taped to a matching frame, and a passable result was obtained within a few attempts. 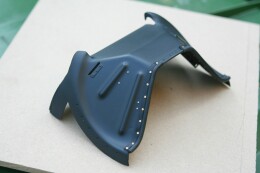 The same piece a few days later after spraying and some added detail.