It’s a curious happenstance that I embark on these jottings just as I reach a major landmark in life. In five days’ time I retire – a little early at the age of 62. The juxtaposition wasn’t planned, it just happened, but hopefully now that I can really get to grips with the model I will be able to achieve in a year what before took me three or four. Let’s hope it works out that way!

As to progress, I sense I’ve reached a tipping point: The instrument panel is almost complete, except for the instrument faces themselves, which I’ve stumbled over badly. If I can crack that, I can install the panel, opening a log-jam of other completed sub assemblies in the cockpit and enabling me relatively quickly to reach the crucial stage when I can seriously consider joining wings and fuselage.

Paradoxically, when I built my Spitfire, I had no computer to generate the art-work for the instrument faces, yet everything went swimmingly: I used Rotring pens, a set of compasses, a protractor, Letraset and my company’s PMT (Photo Mechanical Transfer) camera to produce beautiful white out of black bromides to exact scale and sharp as a razor. Now I have the sophistication of Adobe Illustrator software to create perfect vector art on my Apple Mac, yet the digital printing process creates a whole new set of problems. Even with state-of-the-art commercial kit you still get detectable pixelation, which was never an issue with the photographic process.  We threw the PMT camera out years ago with the advent of desktop technology, and so did everyone else in the graphics industry, for despite my hours of searching I can’t find a studio with one of these ancient monsters still extant.  In the meantime, I’m exploring alternative avenues, tantalisingly close but not quite yet at the tipping point!

So in the meantime this summer, in between struggling with the first year of an MSc degree with the Open University, I’ve been completing the rivet detail on the upper surfaces of the mainplanes. I was speaking to Arthur Bentley the other day, and I asked that doyen of aviation draftsmanship how many rivets he though there might be in the skin of a P-51. His spontaneous estimate of about 100,000 may be wild of the mark. Yet however many there are, that’s how many I’m putting in, for I’m building the model rivet for rivet from the NAA factory drawings, all of which for the P-51D I am lucky enough to have on DVD.

So to accompany this diary entry, I’ve penned a brief description of my technique for ‘riveting’ in 1/5th scale. If you’re interested you can find it on the ‘Techniques’ pages of this website. 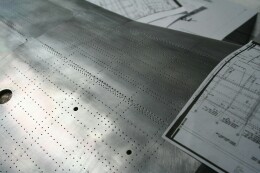 The upper wing skin drilled and awaiting insertion of the rivets. 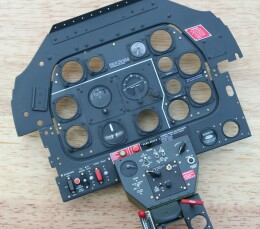