As any P-51D fan knows, the AN 3150 battery and the bulky SCR-522 VHF radio are prominent features within the streamlined, tear-shaped cockpit canopy. Both were a joy to make, but only after I had overcome the problem of finding reference material. Here I am indebted to the Internet, and particularly to Taigh Ramey of Twin Beech at Stockton, California, who kindly sent me a pdf of the AN specification sheet with full dimensions, and to 'Mustanger' who emailed a Zip-file full of photographs of the battery as installed in Curt Arseneau's restored aircraft.

The SCR-522 was trickier, but once I had found a document giving the overall dimensions of the case, I was able to scale-off the detail from the dozen or so good images of the set that I amassed from various sources during an hour or so of searching the net. (What would we do without Google?)  Interestingly, the complete handbook for the SCR-552, and umpteen other military radio installations, is available for free download (see my links page), but I was never able to fathom the complexities of password registration, so there lies an Aladdin’s cave unopened!

(If anyone reading this has legible photographs of the data labels attached to the SCR-522 case and to the battery pack, I would be most grateful for copies.)

As to the construction, the accompanying photographs mostly speak for themselves. The battery is a balsa wood cube laminated on all sides with styrene sheet of sufficient thickness to accommodate the corner radius. More styrene scraps, of various thicknesses, were used to make the top. The trickiest part was the terminal block (I guess that’s what it’s called).  Most references show a large and heavily scalloped wheel to fasten the lid, but I also found some with the two wing nuts, and I chose this version for simplicity.

The SCR started life as a cube of high-density model board milled undersize by the thickness of the skin (This material machines beautifully, but produces dust, making it advisable to wear a mask). The case has several rectangular recessed panels stamped into it, and I milled these out, using a tool to match the corner diameters. This, of course, left sharp edges but these are easily taken off with steel wool. I also milled out the recesses for the hand-grips and fasteners and drilled the rows of what I assume are ventilation holes. The rest of the structure was built up using styrene sheet and strip carefully applied with Superglue.  This includes the two detachable covers on the case top, which have raised rather than recessed panels, easily made from sheet styrene and again 'blended' with steel wool. The various electrical fittings were fabricated or turned in the lathe, and tiny screws added where needed after the whole lot had been primed and painted satin black.

As an aside to this little chapter, fitting the AN-3150 brought an unexpected reward.  It sits atop the fuselage fuel tank on an open framework shelf fabricated from various formed aluminium alloy beams. I made and permanently fitted this four or five years ago, using the NAA drawings. The aperture left for the battery clearly has to match, but I had forgotten this and made my battery from the AN 3150 spec. in isolation. Yet when I came to fit it, it dropped in like a hand in a glove. It was only later that I realised how I might have been made to pay for this lack of circumspection. 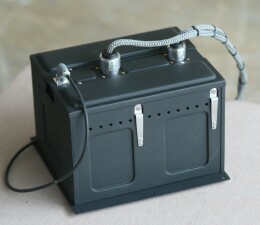 The completed SCR VHF radio set on its mounting plate and ready for installation. The data labels have still to be added (References required!). 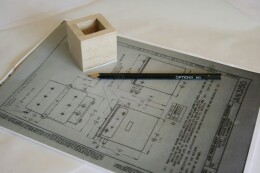 The battery starts life as a balsa wood cube. Note the specification sheet with the full sized dimensions. 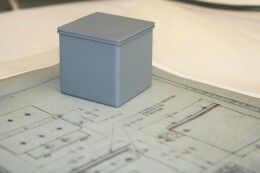 The job following lamination with sheet styrene and a coat of primer. 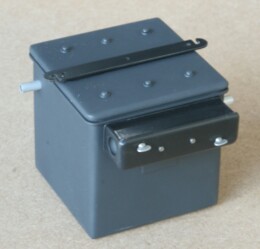 Added detail, including the metal strip over the top used to secure the battery in position. In later aircraft this was superceeded by a neater device. The rubber elbows have yet to be added. 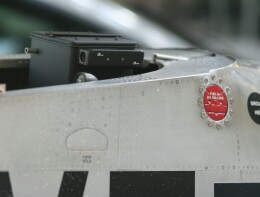 The battery in position on the model. 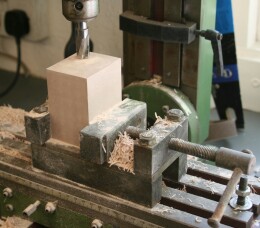 End milling a block of modelling board to achieve the basic shape for the VHF radio casing. 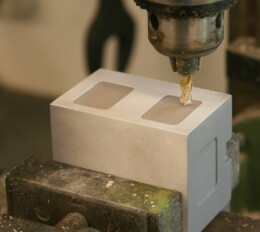 A smaller tool used to create the stiffening panels. 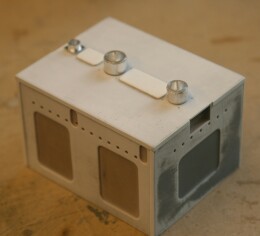 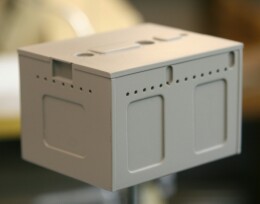 A coat of primer to check for flaws. 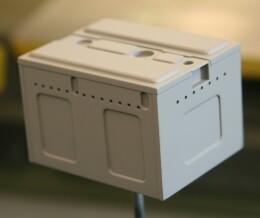 Finally, the two detachable covers are added. These are made up from styrene sheet.