An end in sight

With the fitting of the dummy tyres in February 2013, my model is almost complete. There remain minor finishing touches, including a few additional stencils and labels, and the alloy surfaces call for a spring clean and polish, not least to remove tiny but conspicuous fly dirts accumulated since last summer. I have a seemingly insuperable problem with the finishing and decaling of the Hamilton Standard propeller blades, such that a ‘second’ paint-stripping now looks highly likely. I have also yet to produce the K-14 gun sight, not for the lack of good photographs and many excellent sketches from the manuals, but because I do not have accurate basic dimensions from which to scale the detail. I would be grateful for any assistance with dimensions or drawings. There are also omissions in the sliding canopy operating mechanism, most noticeably that of very prominent pulley bracket arrangement that is mounted on the fuselage deck behind the battery pack. Tantalisingly, the drawing is indexed but missing from the surviving NAA archive that I have.

But these are all relatively trivial things. After very nearly eight years of work (I began in March 2005), my priority now is to get the model professionally photographed, either here or in my photographer’s huge studio. The latter is my preferred option, although it will entail the rather worrying prospect of safe transportation of a very large and bulky item on a 140-mile round trip. The model now takes three people to handle safely. I like to quip that it is not far from scale weight, and perhaps that is true.

I have finished the airframe in the simple but striking colours of Captain Donald Emerson’s P-51D – the chosen scheme of Robert Tullius’s beautiful restoration now preserved and displayed so effectively at the Royal Air Force Museum at Hendon in North London. Yes, I have deliberately left off the Donald Duck nose art, and on the basis that it is best to leave out something that is beyond my capabilities. Graphics art technologies exist to achieve this, and I have used them. Yet I have no guarantee that at such a large scale even the best-executed transfers or dry-rubdowns would snug down realistically over the panel lines and numerous rivets and fasteners. And even if they did, would they then stand the test of time? However, my unashamed eschewal of the under-body invasion stripes and silver-gray paint on the main planes is for an altogether different reason ¬ - a strong reluctance to cover large areas of agonisingly executed metal work with paint! Doubtless my choices will attract their critics, as did the decision to leave the Spitfire unpainted. On the other hand, it may well be that the Emerson aircraft existed for at least a brief period of its history in the guise I have given it. Perhaps there is research out there to support or refute such a hypothesis.

One final note about the painting: I have sprayed the anti-glare panel black to be broadly consistent with the machine as it is exhibited at Hendon. However, here’s a conundrum: On close inspection the ‘black’ used by Mr Tullius on the anti-glare panel and sliding canopy frame is in reality a very deep black-red, which is accentuated on camera. I very much doubt that such a colour ever saw service. Indeed, according to my own communication with Dana Bell, formerly of the Smithsonian and a recognised US authority on the P-51D, the anti-glare panel was invariably either olive drab or dull dark green. His view is that Emerson’s machine would have conformed. Sadly, the few black and white images of the aircraft I have seen are inconclusive in this respect. I intend no criticism to Bob Tullius - it would be churlish indeed to carp at such a magnificent restoration - but only to explain my reasons for the choice of colour.

Hopefully, I will be able to post some nice, formal pictures of my model on this site shortly. But in the meantime here are a few of my own images taken in the less that ideal conditions of my workshop. Some of them may be recognised from previous blogs, but I hope that together they provide an impression of the model. I fully intend to supplement the material I have posted over the last three years by revisiting in no particular order some landmarks in the early of the stages of the build that predate this blog. I hope they prove of interest. 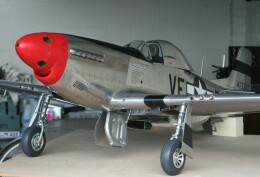 Almost complete... My tribute to Donald Emerson and the thousands of operational pilots who flew the beautiful P-51D.

I have deliberately omitted the underbelly invasion stripes to avoid having to paint over detail in the polished aluminium skin. 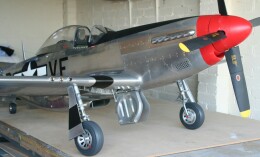 The Donald Duck nose art is also left off for the reasons described in the text. But at least I won't face a law suit from Disney 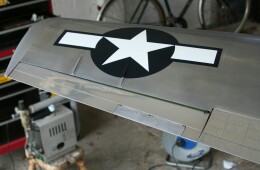 The port wing, taken last summer when the painting was in full swing. 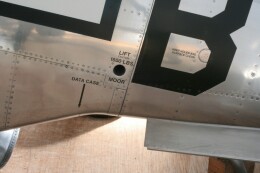 An example of scale detail, a combination of metalwork, spray painting and graphics for the stencils. 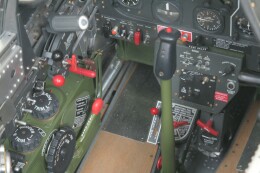 The cockpit interior in a shot taken before the installation of the pilot's seat. 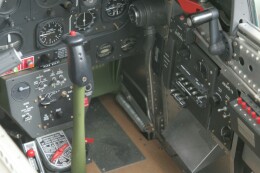 Cockpit and part of the starboard side wall. 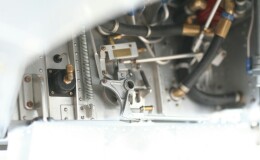 Peek-a-boo from under the wing up into the wheel bay. 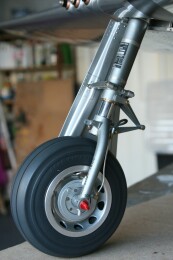 The main landing gear on the starboard side. 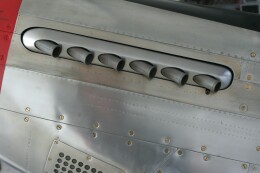 The exhaust stack and its fairing. 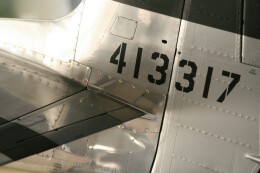 Tailplane detail, including part of the fabric covered rudder. 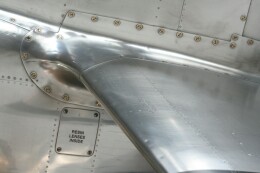 A nice close-uo of the fairing at the root of the horizontal stabiliser.