I designed the landing gear of my P-51D to be strong, a wise precaution given the model’s inexorable increase in weight as it progressed through the years. At its most basic, each main leg comprises a length of sturdy brass tube silver soldered to a T-shaped bracket fabricated from two pieces of 3/32in. thick mild steel. A simple job that requires care to ensure a precise and equal forward angle of rake. Each steel flange is drilled to take four 1/4in. bolts, which secure the undercarriage to a 1 in. thick hardwood pad glued tightly between ribs at wing stations 61.5 and 75. Only after the rudimentary undercarriage had been installed and thoroughly checked for true in both planes was that part of the top wing permanently in-filled with balsa.

The chrome-bright oleo was made from an internally telescoping section of plated curtail rail purchased from the local DIY store. Fortunately such items come in numerous diameters. The visible upper part of each main leg or strut assembly was then bored and turned from thick-walled machine grade aluminium tube, so as to telescope sleeve-like over the brass inner core and its contained oleo. Aluminium blanks for the paired lugs that separately retain the torsion links and ultimately the wheel door fairing assembly were roughed out of solid and inset at right angles into milled slots at the lower end of the leg and alloy welded, prior to final drilling and shaping on my small milling machine. Finally, a separate aluminium collar was bored and turned to simulate the short thickened upper extremity of the leg (although the pivot shaft, which is all but invisible, was omitted). This was machined a push fit and secured in pace with ultra-thin cyanoacrylate. The bond is strong, and with the entire leg cleaned up and polished it is not at all apparent that it is a separate grafted-on component. In the model this exterior aluminium sleeve assembly carries no load, so it is attached to the load-bearing brass core with only a single countersunk screw passing through its lower end into a tapped hole.

The lower sections of the strut assembly are made entirely of brass, and fabricating them was a trickier job. As I hope my photographs illustrate, the main components comprise of a ferule that fits snugly over the oleo, lugs for the lower torsion link and the arched fork assembly which includes a sturdy boss tapped to accept a turned mild steel axle Again, much of the machining was performed after the main components had been silver soldered together. The gently curved stem of the fork assembly is characterised by a fining downward taper and this was imparted by the addition of plastic metal padding applied at a late stage, the leg itself starting life as parallel solid brass bar which I repeatedly annealed and shaped in the vice using brute force and a template cut from the scaled drawing. Various small items of detail, including towing rings, were added at the end, using soft solder. The ferrule is closely machined to give a snug push fit onto the chrome olio and held in place by a single 8BA bolt passing through the entire assembly.

Probably the most taxing element of the job was in fabricating the four articulating torsion link elements, each one of which is in reality a casting, but in the model made up of six individual brass parts, excluding detail such as the lubrication nipples that were added after. The main parts were either turned in the lathe or cut from the flat, and all soft soldered together – a job where solders of varying melting points come in very handy.

In all principal and visible respects, the Bendix main landing gear of the model conforms very closely to the original as depicted in the NAA drawings and in the lavishly illustrated P-51D Parts Manual, and this extends to the mechanical fixings constraining the moving parts. That in reality both upper and lower sections of the strut were sprayed silver grey is fortunate, since the colour is easily matched in automotive paints, thereby obviating any embarrassment arising from the practicality-driven brass-aluminium combination used in construction.

For those interested, an account of the machining of the main wheels was posted on this blog in Novemver 2011. 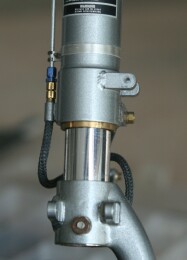 Part of the completed landing gear showing the oleo under compression and the flexible section of the hydraulic brake line. 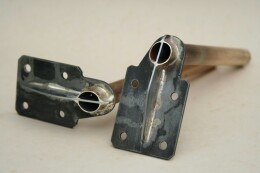 Early stages. The load bearing inner core of each leg starts life as a brass tube silver soldered to a steel plate for fixing to the wing. 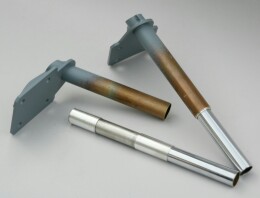 The chrome plated oleo leg telescope inside the brass and is cushioned by thin alumimuium sleeves. 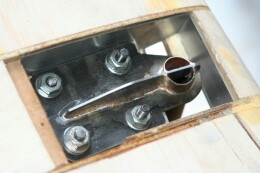 The leg in situ. It is not designed to move! 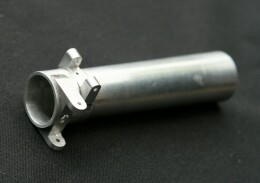 The almost complete upper part of the strutt assembly prior to fitting. Note the single countersunk screw hole by which is is fastened. 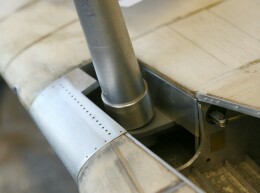 I omitted the rotation shaft on the grounds that in the completed model it would be virtually invisible. 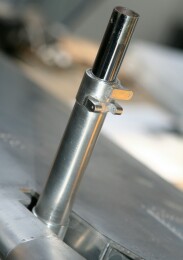 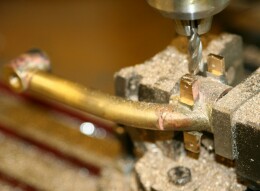 The fork assembly is made of brass silver soldered together. Here the lugs for the torsion links are being machined. 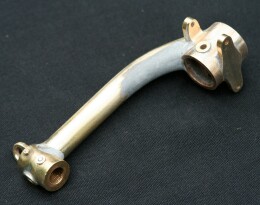 Metal padding was used to add thickness at the top the fork. where it fairs into the ferrule of the casting. 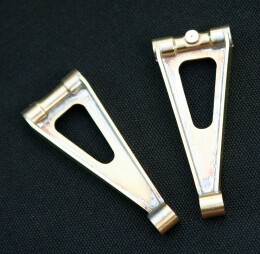 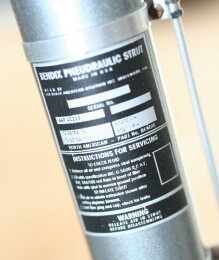 Close up of the data panel. This was created on my AppleMac and applied as a custom dry rubdown. 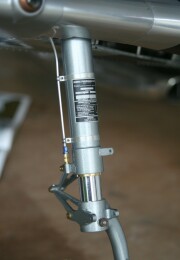 The completed strut after painting. Part of the hydraulic line and its various clips and couplings have been made and installed.