The P-51’s tail wheel assembly, which incorporates the aircraft’s steering mechanism, is a complex item to model. Most of it is hidden deep within the rear fuselage, yet I made a fist at representing at least some of what is not visible, albeit with compromise, primarily to make provision for a firm and dependable mode of attachment to the rear fuselage structure.

The entire affair devolves into two principal assemblies, the shock strut, which is well hidden away, and the combined steering mechanism and tail wheel knuckle assembly, some of which is visible. The start point was to rationalise out of complexity some achievable form for those fundamental components, which once fabricated would support the finer detail. In comparison with the real thing, my shock strut is vestigial and extensively modified to support a heavy mounting bracket that in the real aircraft does not exist. In its truncated form it houses the upper ends of the shock strut piston and oleo torque tube, which are the bright polished steel items in the picture. The tail wheel spindle housing incorporates two horn-like extensions onto which are bolted much of the steering cable array. I fabricated my version of this (and the shock strut) from various bits of brass, both sheet and machine-turned. I also used plastic metal as a post-soldering aid to ‘sculpting’ the rather beautiful shape of the ‘casting’, and this shows as the light grey material against the un-primed brass in the picture. The only really visible element of the entire job is the post and knuckle assembly, a relatively simple affair comprising in the model three pieces of brass: the spindle, the post and the knuckle (or axle), all soft soldered together.

When everything I have outlined above is put together, what remains is fine detail, which I tackled component-by-component using the appropriate NAA drawings. I included sufficient detail to make the finished assembly appear complete, but there are small details omitted, not least the several steel steering cables for which the six large pulleys and their guards are a very obvious feature. I could have added the cables without too much trouble, and perhaps I should; as to the rest, my corner cutting was on the grounds of practicality, given that much would remain forever unseen by all but me!

The pictures show the axially aligned web and its plate with holes for captive bolts pre-embedded in the fuselage substrate (a similar arrangement to that used for the main landing gear). When it came time to install the tail wheel it would be a matter of starting and tightening four washers and nuts. It proved a close run thing. Such was accessibility, or lack of it, in the tiny tail wheel bay that many months later those four nuts took the best part of a day to tighten, and then not without considerable improvisation and repeated expletives! 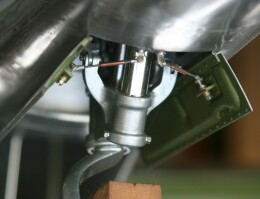 The tail wheel strut and steering assemblies leave little to view after installation in the fuselage. But their construction was the stuff of a model in itself. 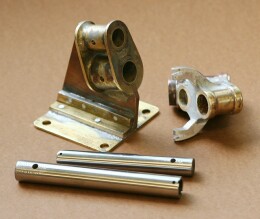 Back to basics. Top left, the tail wheel strut assembly features in name only. It is primarily a means for bolting to the fuselage. Right, the spindle housing and (foreground) the shock strut piston and oleo torque tube. 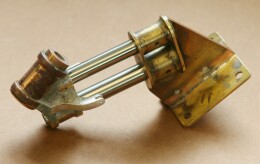 Put the pieces together and something begins to emerge. 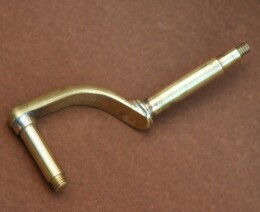 The tail wheel casters on the spindle and knuckle assembly which is photographed here nearing readiness for painting. 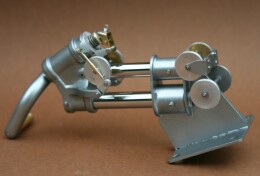 The completed installation carries a considerable amount of detail that will never be seen on the model. 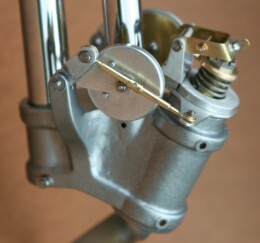 The housing for the tail wheel spindle, showing that with the help of a little plastic metal padding a convincing casting can be fabricated from pieces of brass. The prominent disc is the guard over one of the six steering cable pulleys. 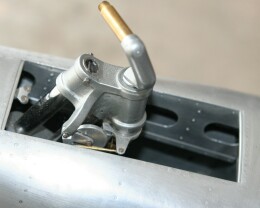 A tight fit inside the rear fuselage. 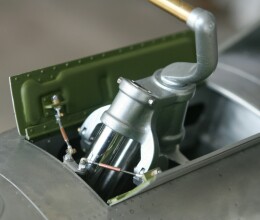 The completed installation awaiting its wheel and tyre. Note the doors have been fitted.