I described how I dressed the Mustang’s rudder with fabric in my diary entry dated May 2011, but because I began the model more than six years before starting this blog, I have said nothing so far about how I built it (or any of the control surfaces, for than matter) so I will try to rectify the omission now.

Anyone reading my brief sketch back in April 2011 will know that the model’s airframe, including wings and empennage, is built as a plywood frame, whose sections are in-filled with solid balsa, over which the metal skin is applied. Unsurprisingly, the control surfaces are much the same, except that in the case of the rudder the arrangement of the ply ribs and peripheral structure, simulate an open-frame construction over which fabric is stretched.

At this early stage I relied exclusively on Arthur Bentley’s impeccable profiles and sections, which gave me a sound basis on which to graft all subsequent detail taken directly from the ultimate primary source – the NAA manufacturing drawings.

The first picture shows the rudder framework pinned to my baseboard. It is crucial that all the control surfaces (and their trimmer tabs) are built and contoured in situ with their respective fin, tail-plane or wing. Only then is it guaranteed that when complete and reassembled, they will fair smoothly and truly, one to the other.

Just as in the fuselage of wings, card templates taken from the drawings are used to mark out the ply half-sections, which are cut so as to allow for the thickness of the basal sheet (the profile) onto which they are glued. My Proxxon bench-top fretsaw is invaluable for this kind of close tolerance work, which would take forever to do accurately by hand.

Two key features to be noted from photos 1 and 2 are the hardwood ‘spars’ used to stiffen the structure in the vertical plane, and the embedded lengths of tubing (brass and/or aluminium) and their telescoping brass rods – my favoured method for attaching control surfaces and trim tabs.

Once one side of the rudder has been completed, and fleshed out with balsa blocks at the top, bottom and along the leading edge, it can be removed from its baseboard and the process repeated on the reverse side without risk of warping. Excess balsa is carved away and the surfaces, including the semi-circular leading edge, are sanded to shape.

This stage is represented by photo 3 in which the fin and rudder have been assembled temporarily to check for alignment and fit. An obvious feature in photo 4 is the heavy counterbalance weight near the top. This is shaped from a block of basswood, which is glued into a shallow rebate cut into the leading edge, and later skinned on all sides with litho plate. Making it requires repeated reference to the neighbouring fin sections since its width tapers back slightly from the leading edge, and any mistakes in any dimension would be very obvious on assembly.

The rudder trimmer tab is metal skinned, and I used .006-in. thick litho plate (c.f. ten or eleven thou for the rest of the airframe). The skin is pre-folded and applied in one piece over the balsa substrate with the seam invisible down the leading edge. The thin material helps ensure a crisp, sharp trailing edge, but the downside is that it leaves the part more prone to damage and inadvertent dimpling during the riveting and finishing processes. I suspect I will stick to the thicker stuff in the future.

The skin is applied using Evo-Stik reinforced along the seam with superglue, and the 1/16-in. alloy snap head rivets are emplaced individually into drilled holes and held with a tiny blob of cyanoacrylate. The little openings around the hinge positions are cut out afterwards.

The graceful tapering tail light fairing was carved from basswood, hollowed out and glued into a V-shaped slot cut into the rudder trailing edge. The metal parts, including the lamp-holder and fixing pate were turned and filed from alloy bar and the two little fixing screws complete the detail. The cover was turned and polished from clear plastic.

Finally, I made the trim tab control linkage and its fairing, which is shown in photos 6 and 7. The sheet metal parts are cut and formed from litho plate (I describe the fluted fairings elsewhere on this website). Close study of the picture shows that the linkage itself comprises of a chain of five separate parts, including the two small adjustor nuts, threaded and glued onto a single 14BA steel stud. As I recall, the tiny cheese head steel screws are 16 BA. 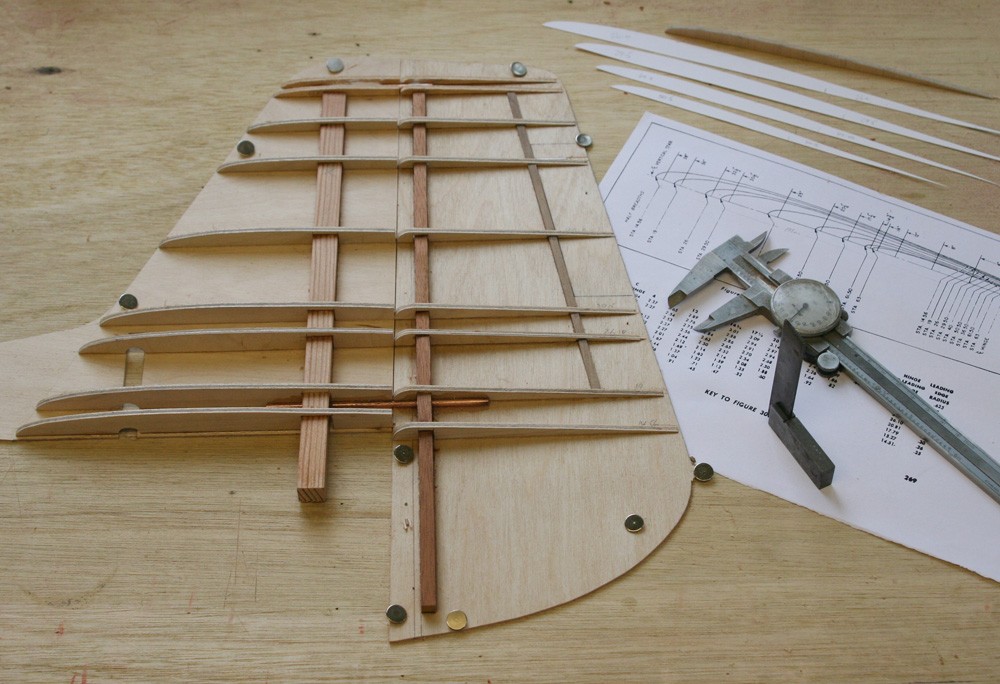 Photo 1: The fin and rudder profiles are pinned to a baseboard and the half-sections built-up as a single integral piece. The ply base of the rudder is thinner than that of the fin to facilitate accuracy at the trailing edge. This is allowed for by inserting a packing layer between it and the baseboard. 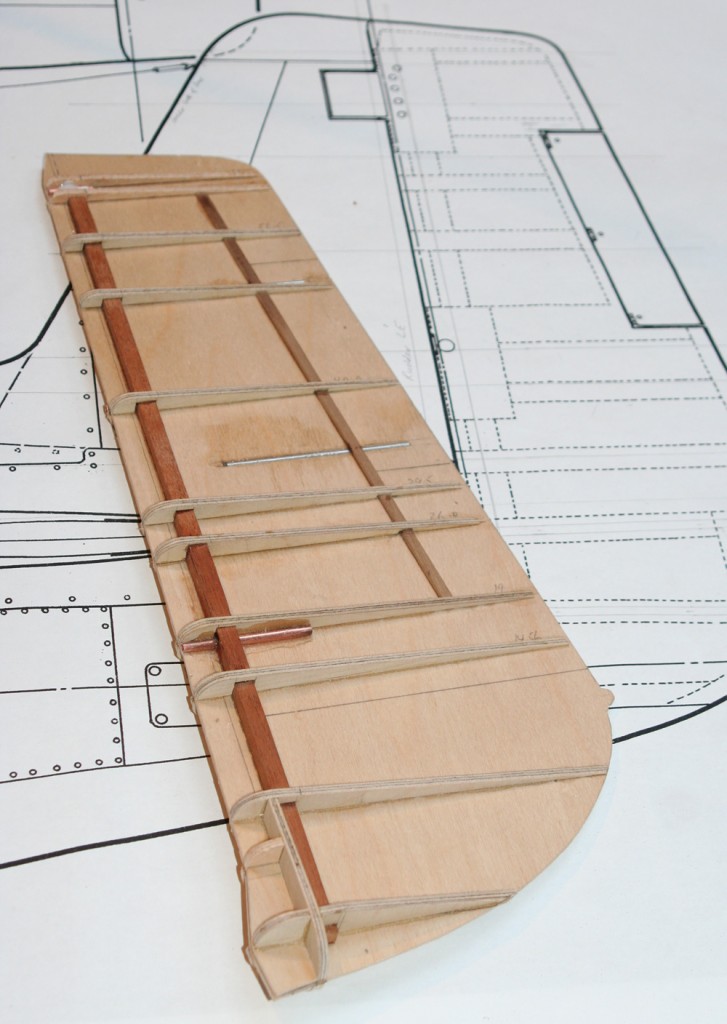 Photo 2: The open frame structure on the port side is now almost complete. Additional strips of hardwood are required immediately aft of the trim tab trailing edge to bring the level flush with the ribs. 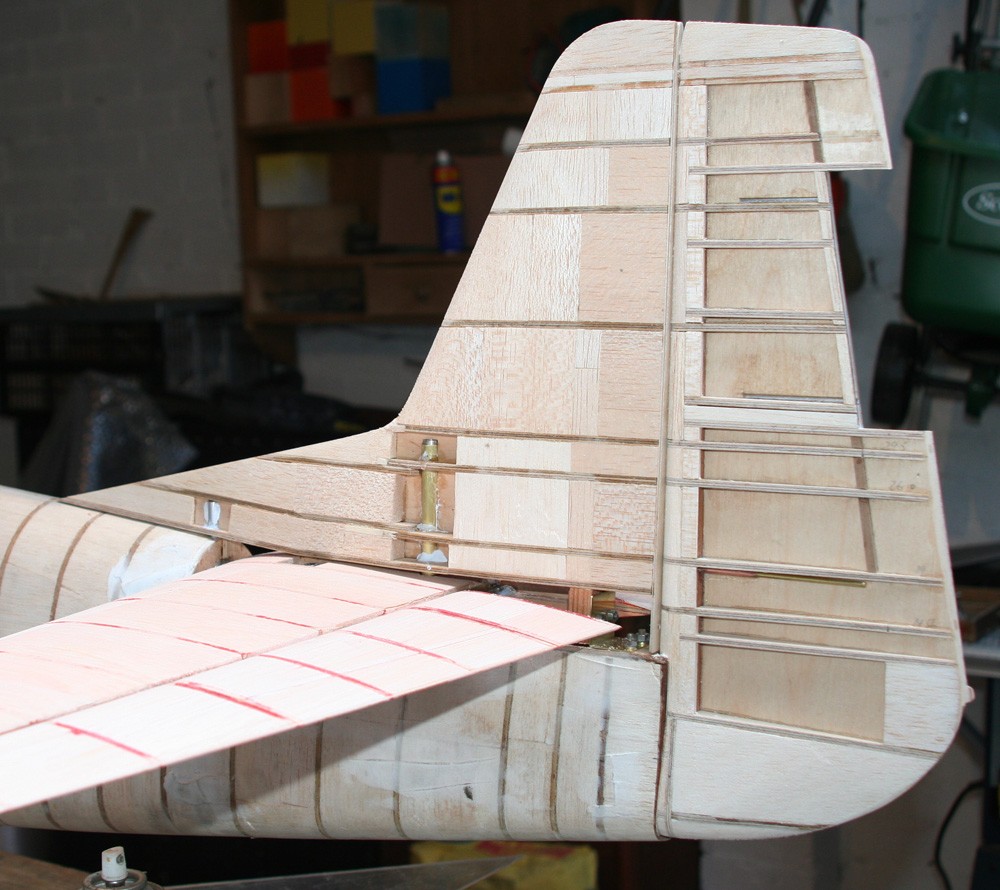 Photo 3: The balsa wood parts have been added and sanded to shape on both sides of the rudder and the entire assembly is test fitted. 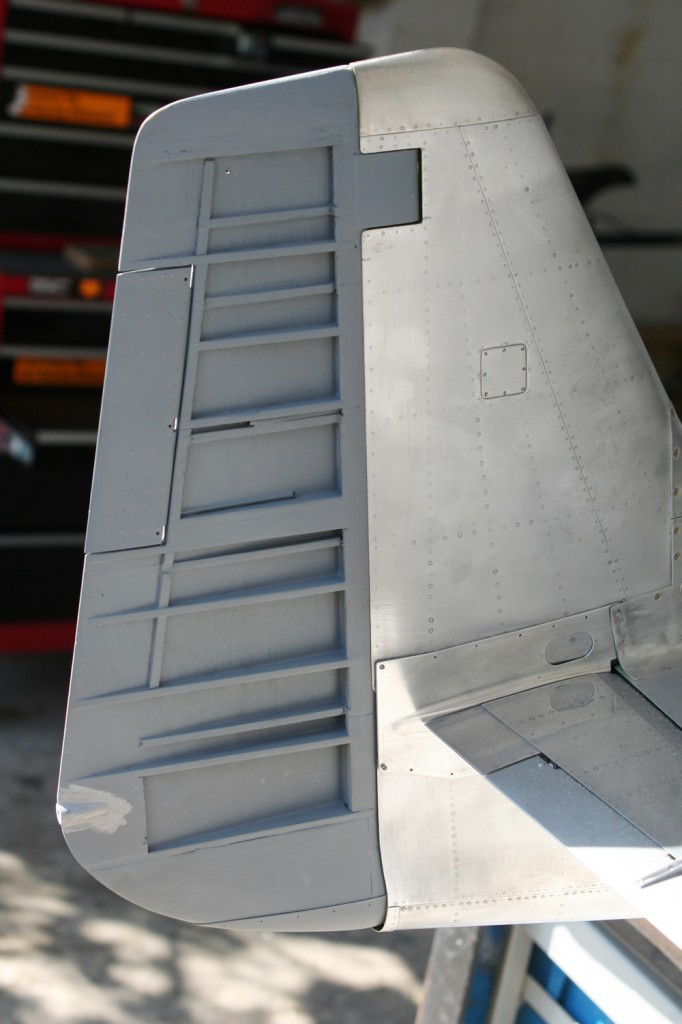 Photo 4: The rudder framework in primer and almost ready for its fabric. Note the counterbalance weight and the tail light housing with some unfinished filler 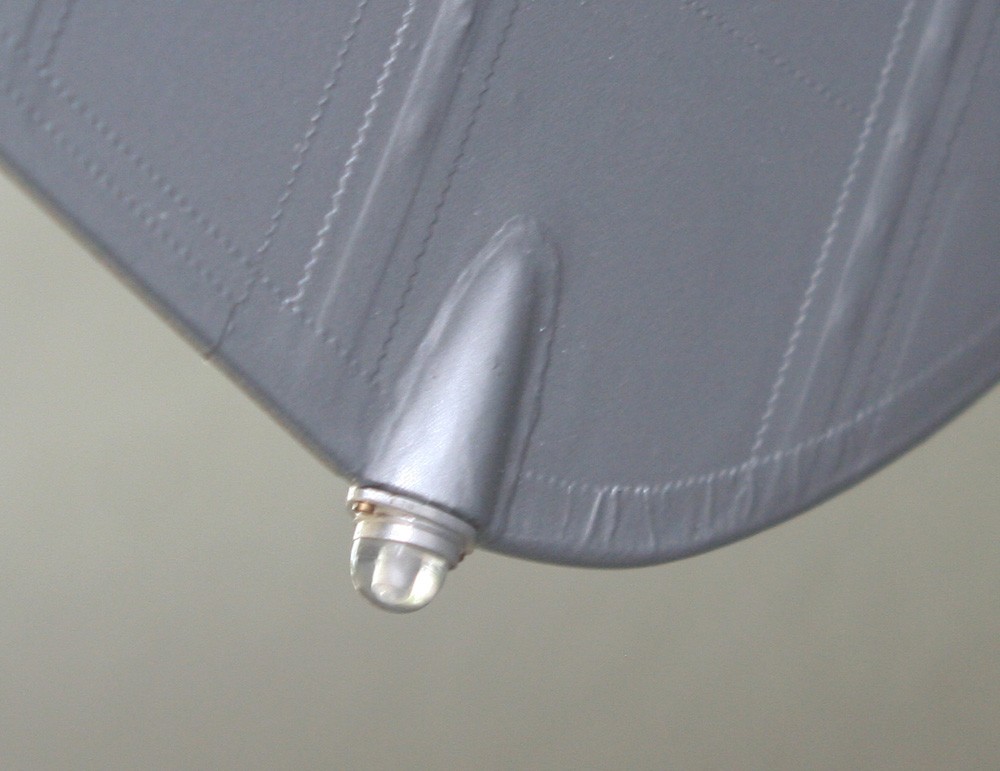 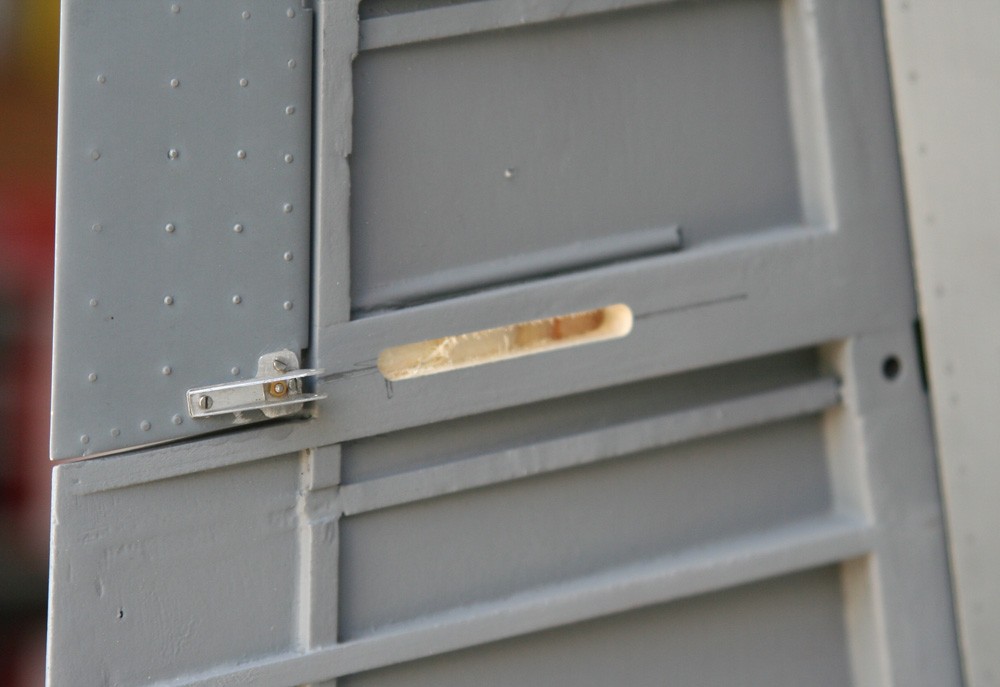 Photos 6 and 7: Two stages in the fabrication of the trim tab actuator linkage and its fairing. Note the rivet detail on the trim tab. 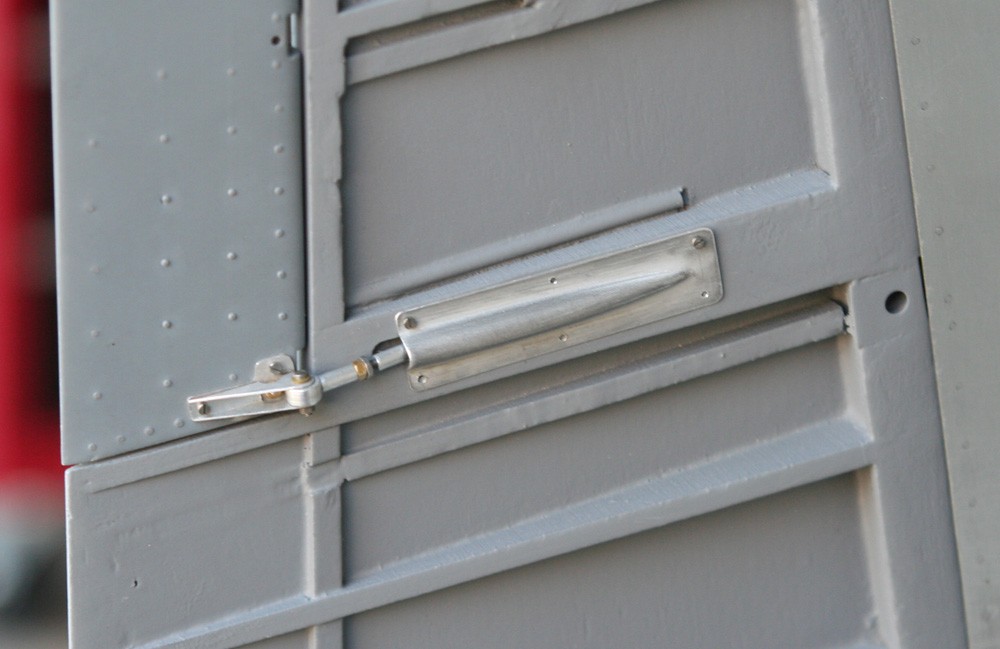 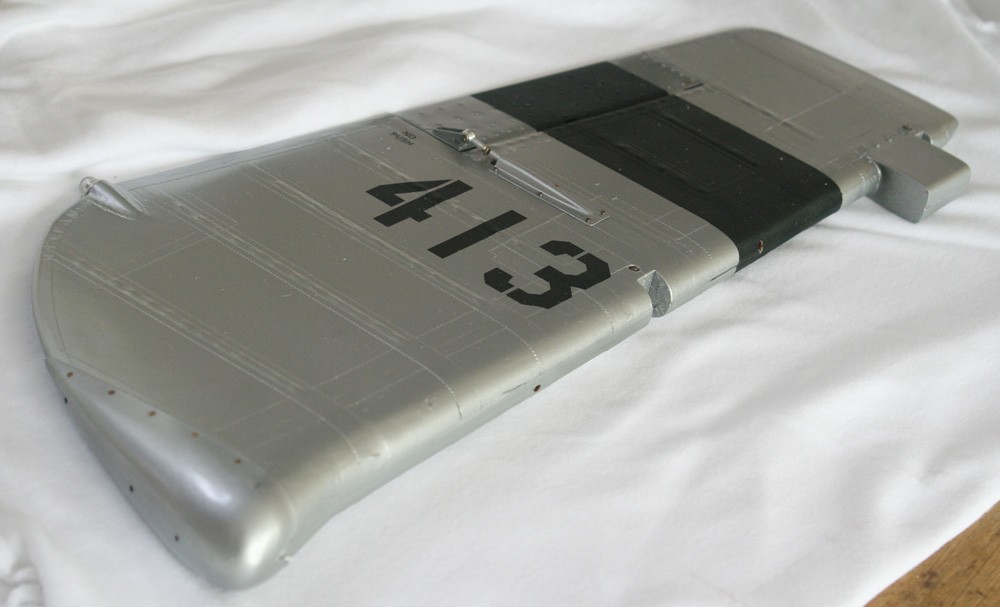 The completed rudder. The vac formed cover over the heel of the rudder is described in my blog dealing with the fabric covering.