During the gloom of a seemingly endless winter I turned to a task I’d been putting off for many months… the completion of the instrument panel. As noted previously, I’d been hampered since my preferred method for creating instrument faces is to use a PMT camera (Photo Mechanical Transfer), but try as I might to find one still operable, these ancient pieces of kit, once the mainstay of all reprographics houses, seem to have disappeared from the face of the Earth (If anyone knows of such a device still in service, I would be most grateful for its whereabouts.).

I created the artwork on my Apple Mac using Adobe Illustrator, a struggle since I’m not at all familiar with the programme, but I got there in the end. A friend of a friend offered to make negative film from hard copy printouts, thereby achieving the white on black effect. It worked, yet somehow the fine detail was lacking. So I resorted to having rubdowns made, an expensive and marginally better option, yet alas still not up to the superb result I got with my old studio rostrum camera.

My photos show some of my custom ‘rubdowns’ and the completed panel. It’s worth noting that the needles are put on individually on separate tiny discs of clear acetate, so they have the appearance of standing just proud of the instrument faces.

This marks a landmark stage in the model, since with the panel fitted, the way is open to install other cockpit sub assemblies while there is still access from below. Only then can I finally fit the main-planes to the fuselage.

I’ve also included a picture of some of the many cockpit placards (and the two info. plates that are prominent features of the main landing gear). The dry transfers are applied directly to thin aluminium (obtained from dog food trays!!), and it is prudent to seal and protect them. However, I learned to my cost that varnish based on white spirit or cellulose thinners causes the delicate rubdowns to wrinkle; acrylic seems the safer option. 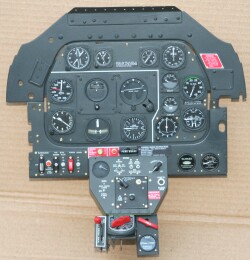 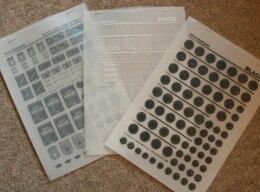 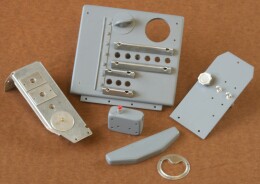 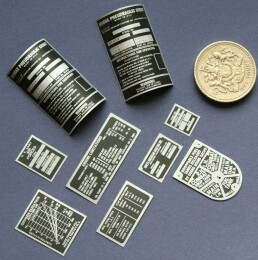