The start of winter marks the completion of the P-51’s main-planes. I spent the last few days laboriously polishing the control surfaces stored away since in 2007, and they are now temporarily fitted… a landmark stage in the model, but one finally reached with a job that I had been dreading: the gun port blisters.

In the real aircraft these are aluminium alloy pressings, yet there was no way my skills would extend to that; somehow I would have to cheat. Yet how? With the blisters arrayed side-by-side in close order, the slightest deviation would stick out like a sore thumb!

For several years I had been toying with an idea, a sort of thought experiment that at times I was convinced would work while at others I almost discarded. This autumn I decided to give it a go.  The result is not perfect. For example, I am aware that the blisters project forward of the leading edge slightly more than they should, which was a necessary compromise to provide the mechanical strength I considered necessary in the machining process, for my solution was to turn each blister from a resin block casting in the lathe.

The ten images that accompany this diary entry will, hopefully, convey the methodology without too much commentary from me. Essentially to get the blisters to conform accurately both to the taper and contour of the wing, I poured resign over the leading edge. Then to provide the internal support that would be essential during the machining process, I poured a second lot of resin to fill the void.

With the resultant solid lump sectioned into three, the machining could begin using an alloy mandrel I had left embedded by way of the gun ports. By the way, the reason I dyed the second lot of resin was so that I would be able to see the emergent shape of the blister during turning.

It sounds relatively easy, but it wasn’t. The machining was a nightmare, and on more than one occasion the tool bit in at the last moment, sending a part of the delicate work-piece flying off into space and necessitating a touch-and-go repair. A further hurdle was to make the finished job look like an alloy pressing and not three pieces stuck on! My solution was careful masking and lots and lots of coats of automotive spray primer, such that the sutures in-filled and smoothed out.

The ‘eyeballs’, which allow gun alignment to be adjusted, I made from separate resign castings out of a pattern turned on the lathe. The gun muzzles themselves were turned and milled from brass and alloy bar and thinned walled alloy tube. That was the fun bit!

Looking back, this is probably the toughest model making callenge I've ever undertaken. All in all, I'm pleased with the outcome. As I said, it was touch-and-go... a small detail with big potential to wreck the entire model. I think I've got away with it! 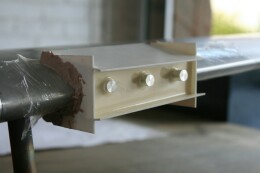 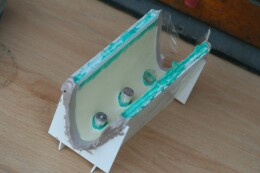 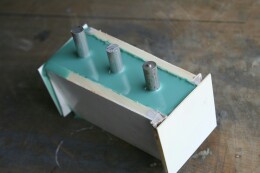 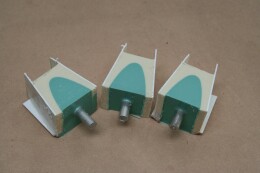 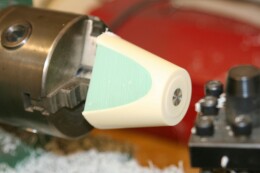 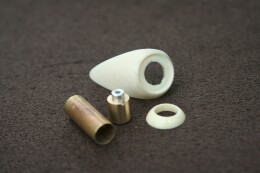 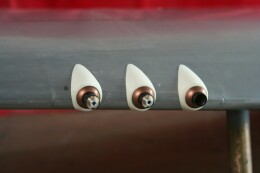 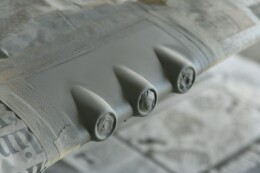 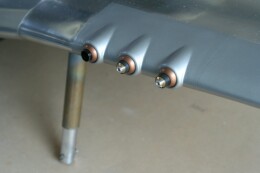 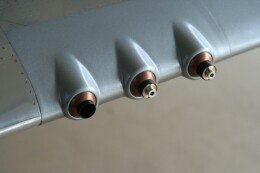