I turned to the wing root fairings during the second half of March. These comprise of four separate pieces per side. In the real aircraft they are alloy pressings, the most complex being at the trailing edge, which is where I started. The pictures speak for themselves of my method. I cut 0.5 mm alloy sheet to achieve the profiles (taken off the NAA drawings) in two planes, screwed these respectively to the wing and fuselage to obtain the underlying contour, built up the space between with scraps of soft balsa wood and, with the piece still in-situ on the model, carved and sanded the concave fillet shape. I used cyanoacrylate glues throughout, and the resulting structure is surprisingly strong and rigid.

The outer skinning was done with 0.011 in. annealed litho plate, secured with a mix of contact adhesive and Superglue, again with the piece fixed temporarily in place to provide sufficient rigidity on which to work the metal. Once fixed in place, excess top-skin can be trimmed back to the underlying profiles quite easily.

Overall, this was a fairly simple operation, although the leading edge fairings proved trickier due to their tight counter curvature, which forced me to make each of these in two pieces and adopt a weld line that does not exist on the real thing. Even with this subterfuge, repeated annealing operations and considerable burnishing were required to coax the metal into shape.

Due to the method of construction, my leading edge fairings are permanent fixtures on the airframe, secured there by strong contact adhesive, but the rest are removable. Indeed, the trailing edge fairing must be removed to install the flap. To imitate the many fasteners I used 12BA brass screws in little collars punched from pewter sheet. To get a realistic effect, I discovered that each hole in the airframe needed to be countersunk, which meant that the screws when driven home caused cupping of the pewter. However, once bedded down using soft plastic tube and cleaned up with the finest grade steel wool, these past muster reasonably well. The screws self tap into the soft aluminium skin and balsa substrate below, and the fairings once affixed, must ad considerable strength the wing-fuselage union. 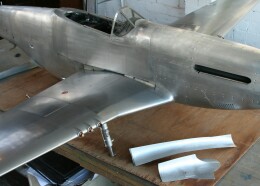 Almost completed fairings ready to fit to the airframe. 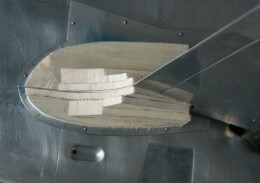 Work in progress: Blocks of balsa wood glued in place to build the shape of the starboard trailing edge fairing. The flap is installed temporarily in order to ensure a snug fit. 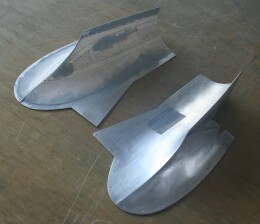 Skin has been added to the starboard fairing. Note the cut out for a small inspection cover. The top skin was put on in two pieces and the join down the trailing edge is practically invisible. In the real aircraft these items are one pressing which is reinforced internally. 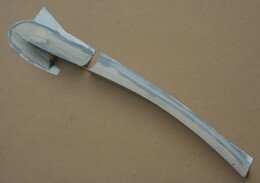 The fairings prior to skinning. Already the structure is strong and rigid. 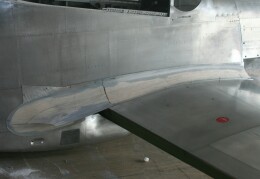 Test fitting. My longer centre wing fairing comprises of two pieces in the real aircraft. I made it look that way by using two pieces of top skin. 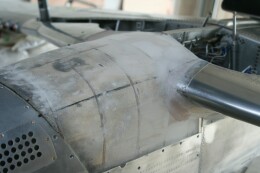 The forward fuselage has been built up around the wing and contoured in balsa and automotive body filler. Thus the airframe itself becomes the former around which the thin alloy plate is worked. 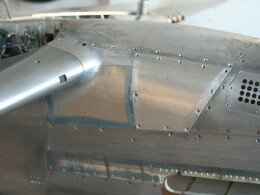 The completed forward fairing showing the false seam along the leading edge line needed to achieve the tight counter curvature. The engineers' blue is to aid accurate cutting.