With the completion of the main landing wheels last October, my P-51 project has come to a standstill. Over the last few months I have been occupied, to the exclusion of almost all else, with preparation for my Masters dissertation in Earth Systems Science, which I write this year and submit in September. But at least I plan to use the interlude away from my workshop to reflect on at least some of the many stages of the model tackled prior to starting this diary.

The auxiliary fuel tank is one of the few elements of the model that I took on without recourse to dimensioned drawings, an omission justified on the grounds that all but the upper surface is totally invisible on installation. Mostly, I worked from excellent sketches in the P-51 D Parts and Maintenance manuals and from photographs of the tank in situ in the Imperial War Museum’s partly stripped down Mustang “Big Beautiful Doll”, which I took myself when the aircraft was under renovation at Duxford.

Since the tank is by design extremely close fitting, I was able to derive the overall dimensions by simply measuring the space available in the appropriate compartment of my by now almost completed fuselage, and on that basis to build a simple structure from balsa wood. The manuals show that the tank has vertical channels incorporated into to its flanks to accommodate the fuselage frames, and I created these out of split down plastic tube of a roughly appropriate internal diameter, which I grafted into the balsa structure. In reality, these flutes narrow towards to top, but I ignored this detail on the grounds that they would never be seen.

By this stage it had become clear that it would be impossible to manoeuvre the bulky, and rigid, tank into the limited space reserved for it – testimony, if such was needed, as to why the tanks in the full sized aircraft are collapsible! The only option was to cut away a significant portion of the tank’s volume, a minor annoyance but of no major consequence, since, like the flutes in the sides, it would be invisible.

The next stage was fun: To simulate the surface texture of the heavy rubberised canvas material used for these tanks, I hit on the idea of covering the wood with a fine, open weave material, and I had an ideal source – the sling that had only recently supported my left arm following some minor surgery! It took no time at all to cut the material into panels, one for the top and four for the sides, and to paste these over the balsa surface using repeated coats of white glue. Not unlike the glass reinforced plastic ‘lay-up’ process, the whole lot dried to a nice hard, glassy finish, but with just enough texture to look interesting. This was followed up by the addition of masking tape cut into strips and circles to replicate reinforcing applied to the tank’s corners and by way of the fixtures and fittings. Two diagonal lines of 1mm graphic arts tape cutting across the upper surface nicely mimicked seams in the material that showed clearly in my reference photographs. A couple more all-over sealant coats of thinned white glue completed this stage of the job.

I hope my images speak for themselves of the metal work that followed: The only real problem was making the fuel contents gauge housing that (inexplicably to me) sits ‘behind’ the pilot’s head! Apart from the prominent flange half way up, its shape is not unlike a ship’s ventilator – not an easy thing to machine. In the end I compromised by turning the tubular ‘neck’ in brass and grafting on a cup-shaped top, which I scavenged from some component or other that had long been lurking in my bottomless plastic kit ‘spares box’. It’s not exactly right, but neither is it obviously wrong, and it answers my wife’s oft-repeated charge that I never throw anything away!

As to the rest, there’s not much to add: I used a combination of litho-plate and various sized steel hexagon bolts for the removable cover plates and other small detail, all of which was enjoyable and easy work, with just one exception – the big swan neck fuel filler tube. I spent several fruitless hours trying to bend brass and alloy bar and tube without distortion – something I had thought would be a very easy. Repeatedly when using tube I got compression, and with solid bar I was unable to achieve the desired curvature. Finally in disgust, I resorted to two-part modelling putty. When rolled to the correct diameter it took the curvature quite nicely: Not engineering, but by the time I had added a weld seam, the finished product more than fitted the bill.

As to the colour of the tank, my photographs offered little help, both because of ambient low light in the Duxford hangar and layers of colour-concealing grime. Instead I was guided by some rather poor 1940s photography published in a reference book, and settled on a black-grey base colour, tinged with red-brown, which I mixed from Humbrol colours and sprayed. I followed this by dusting over various shades of grey and brown pastel, finishing off with a sealer coat of satin varnish. If it’s wrong, I’m sure someone will let me know. 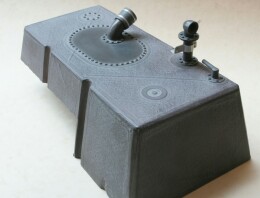 The completed tank ready for installation. 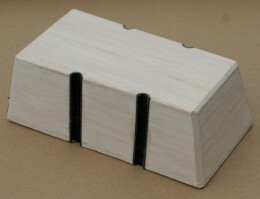 The basic structure made from sheet balsa wood. The flutes are to accommodate the fuselage frames. 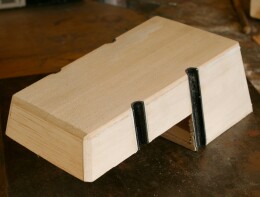 Woops! A big chunk has to be cut away to get the tank into the confined space behind the pilot's seat. But the surgery will never be seen.

Fabric cut to size and ready for 'lay-up'. A simple way to reproduce the surface texture of the fabric based tank. 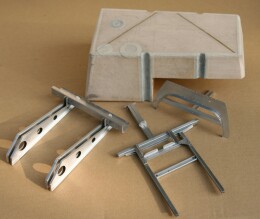 The tank is now ready for exterior detail. Also shown are some structural components that can only be fitted once the tank is in place, including the pilot seat support and the rack for the raddio transmitter receiver 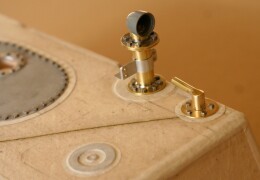 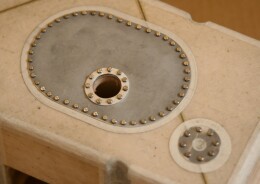 Inspection covers are made of litho plate and from aluminium lathe-turned components. Steel hexagon bolts in various sizes finish the job. 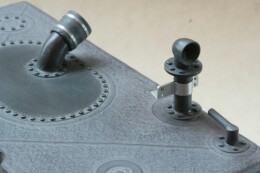 Only the fuel indicator dial face is yet to be fitted.