In this series of retrospectives, I look back at some elements of the model that were either omitted from this diary or undertaken before it was started. I make no apology for the totally random sequence of events, which bear no relation to the sequence of build. I include them now simply because the problems and challenges encountered and methods used may be of help or interest to other model makers.

One such is acid etch, and I used it on just one occasion... in the making of the rudder pedals. As might be inferred, I am no expert in this particular application of the model maker’s art, but the results I achieved after some experimentation made the attempt worthwhile.

The demands of heavy flying boots on the P-51’s pedals, quickly wear away the paint, with the result that the embossed NAA eagle and the block capital instructions for the pilot to ‘DEPRESS PEDAL TO RELEASE PARKING BRAKE’ become eye catching features in photographs of the lower cockpit of all but factory fresh aircraft. I wanted to capture this. The easy way, of course, would be to make customised aluminium coloured rubdowns, but how much better if a real embossed effect could be achieved.

But this posed a problem: The practicalities of the job dictated that I make the body of the pedals in brass, simply because this would enable me to solder the various components with relative ease; but the etching had to be out of aluminium. Would it be possible, I wondered, to combine the two in the form of an aluminium laminate over the face of both pedals?

I began by experimenting with 40% ferric chloride solution, litho plate and some old sheets of Letraset dry transfers. The technique is simply to apply the Letraset to one side of the sheet and to paint the other. The FeCl3, which is not an acid but a corrosive salt, then fizzes away at the unpainted surface, except where it is masked by the Letraset. The results were encouraging, and after several attempts with varied timings I got some nice crisp impressions.

The next stage was to create the art work, and I scanned the NAA logo and traced it in Adobe Illustrator on my Apple Mac. Adding the park brake instruction took a matter of moments, and I emailed the scaled-to-size result to a graphics studio to have custom rubdowns made.

In the meantime, I had been busy on the metalwork: My pedals are fabricated from brass, either cut from the sheet or turned in my lathe. They pivot on a bar which is supported by fixings on either side of the fuselage. As my photographs show, and in order to make installation possible, I was forced to make this in two halves joined by a split sleeve - a cumbersome and strictly ‘un-scale’ modification which fortunately is not visible. The pedals themselves also pivot on brass pins locating into the lower ends of the side supports, but these are not shown in my pictures; neither are the various springs and other fine detail associated with the cable runs.

Prudently, I ordered sufficient rubdowns for several attempts at both the etching and laminating stages, where I anticipated some attrition. In the event both went smoothly: I was able to etch five or six usable pieces using 11-thou thick litho plate, the best of which I cut to fit exactly inside the pedal faces, allowing sufficient material at the bottom to curve down around the tubular brass basal part.  When satisfied with the fit and cleanliness of the components, I simply ran in some nice thin cyanoacrylate, which fixed the alloy laminate rock solid to the brass below. When sprayed with primer, any remaining traces of a seam could be filled with slightly thicker cyanoacrylate, and the job was done – all except for the best bit of all:

My surrogate flying boot was a skein of fine steel wool, which took the paint off just where needed, and out popped the NAA logo and the lettering... real embossed aluminium. And not that difficult to contrive! 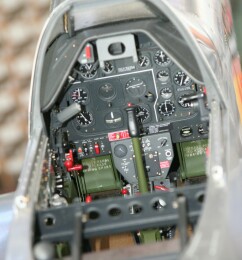 The pedals installed in the almost completed cockpit. The embossed NAA logo and lettering proved well worth the work involved. 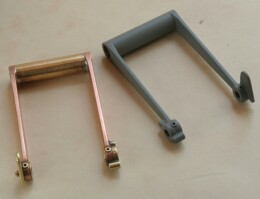 An early stage in the fabrication of the rudder pedal supports. All the structural work was done in brass so that the various pieces could be soldered together. 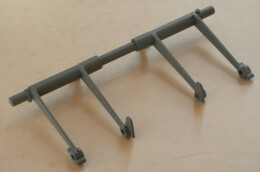 The pedal supports pivot on a tubular bar to which they are fixed by two grub screws. 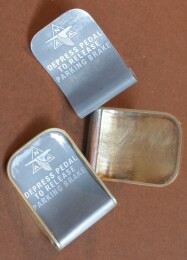 The critical stage: Here one pedal has been faced with the acid etched litho plate, and the other is about to be installed. Note how the litho plate has been curved to fit the shape of the pedals. 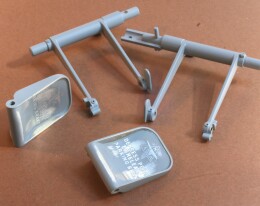 The pedals are now ready to be assembled onto their supports. Note also the split sleeve modification that enabled me to fit the sub assembly into the fuselage.