So ends another chapter... My P-51D departed from Whaddon on the morning of September 3, 2013 on the 150-mile journey to the Royal Air Force Museum’s west midlands site at Cosford, where it is destined for permanent exhibition in the entranceway to the museum’s splendid visitor centre. I am both proud and relieved that it has found such a good home.

The model, eight years in the building, has left a considerable void in my workshop and - I have to admit it - in my heart. But it has also opened up much needed space for my latest project, a Supermarine Spitfire Mk IX.

The last few weeks of the Mustang’s tenure at Whaddon were fraught, not least because of the impending excursion to Ipswich for studio photography. A few days beforehand, I knocked together a simple trestle on which to move the model safely. Yet it still took three of us to manhandle it into the 35 cwt tail lift truck that I had hired for the day. Orientated with the wings running lengthwise down the vehicle, it just went in with spinner and rudder removed, and quite literally with millimetres to spare.

I used best part of a roll of Duct Tape to secure the stretcher to the truck bed. Even so, the outward journey, with me at the wheel and old school chum, Derrick Garwood, there to assist, was like treading on eggshells. For the first dozen or so miles, I got Derrick to mount vigil in the back, just to make sure that nothing moved. But worse was to come. As we returned that afternoon, the skies opened and I negotiated most of the M14 through a deluge. As we neared home on roads that more resembled rivers I remarked to Derrick, somewhat ruefully, that I hoped the roof of our demonstrably battered and ancient vehicle did not leak. Fifteen minutes later when we raised the tail gate, still in pouring rain, we found that it did, and quite seriously! Mercifully, while the port wing had clearly received an unscheduled shower bath, no damage had been done.

More professional was the move to Cosford. The museum despatched its carpenter, Ian Osbourne (who would be shortly making the display case) and volunteer Denis Johnson in a seven-ton curtain-sider, and the diligence with which the two secured the model, still on its stretcher, was a joy to behold. So there we stood, Eva and I, as the big blue truck receeded slowly down the single track road from our cottage, and I do believe that even she discovered a mote in her eye.

Thus ends the story of the building of my 1:5 scale P-51 D. Nonetheless, I propose to further update this diary over the upcoming winter with retrospective entries describing features of the build that may interest model makers and others. So do take a look now and then. 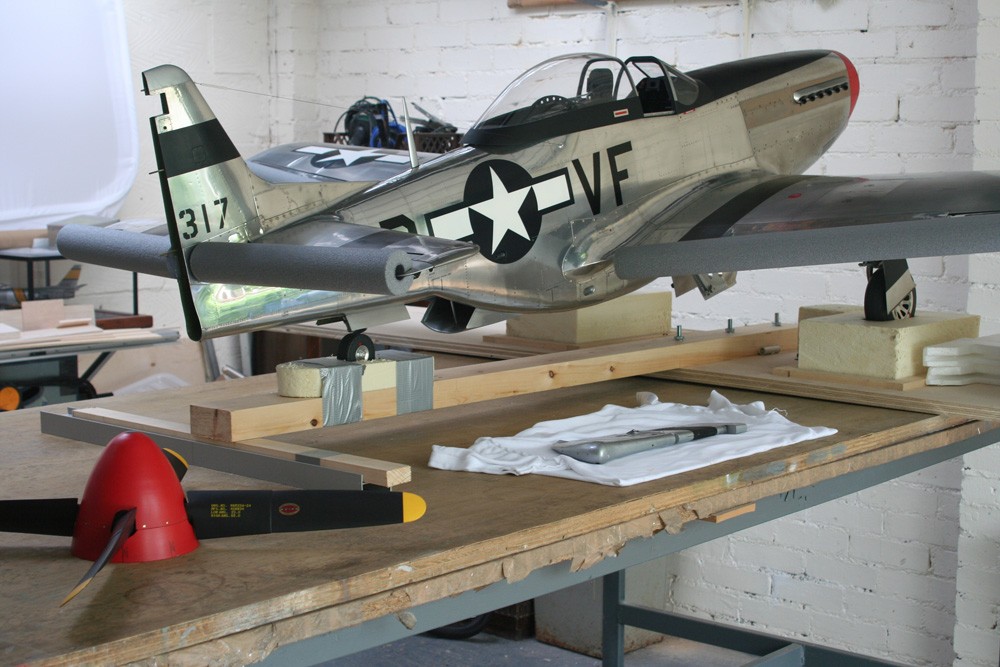 The model on its trestle shortly before its first excursion to Ipswich. 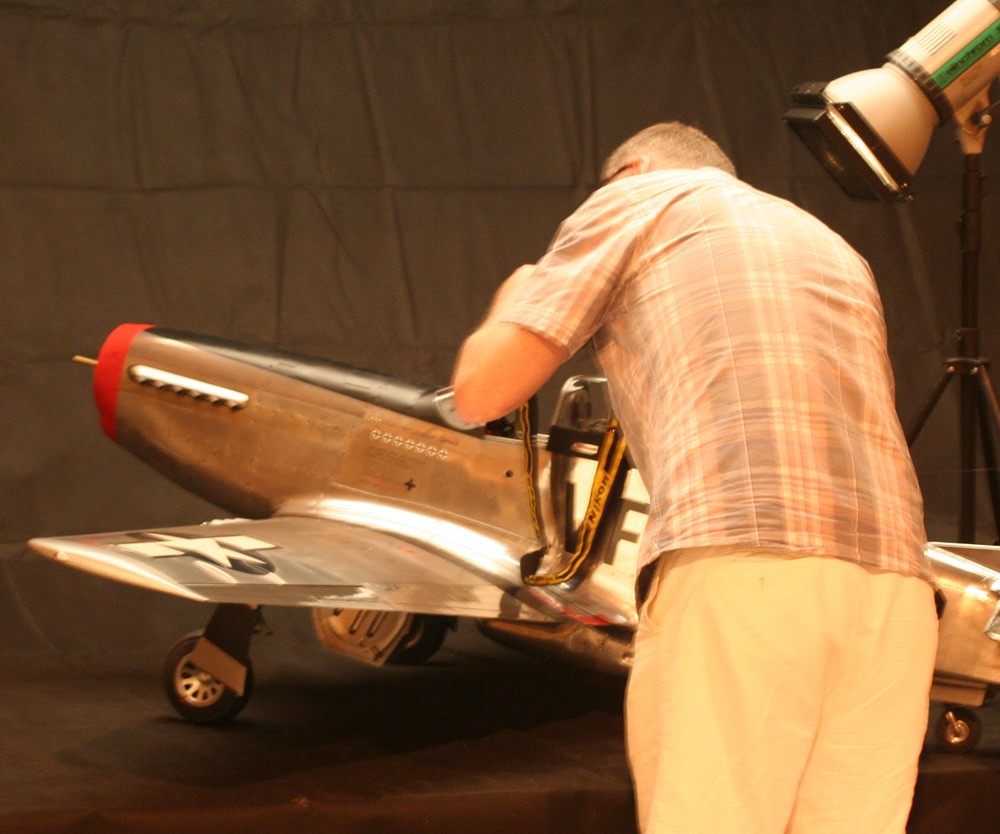 Safely in the photographer's studio for the first test shots. 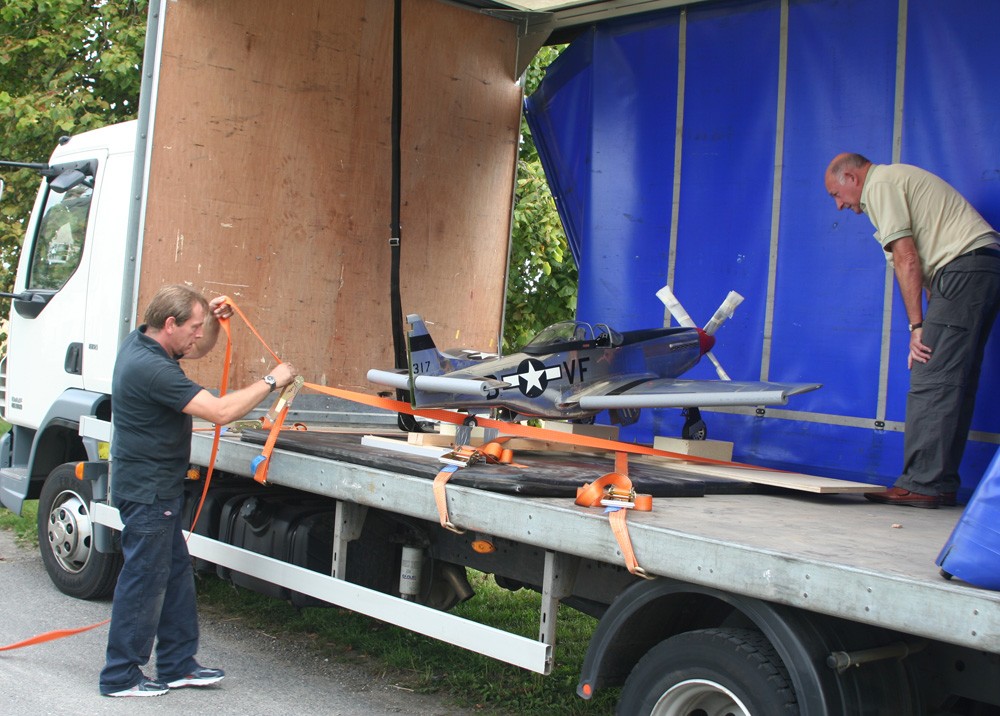 A couple of weeks later and the model is loaded for transportation to Cosford... 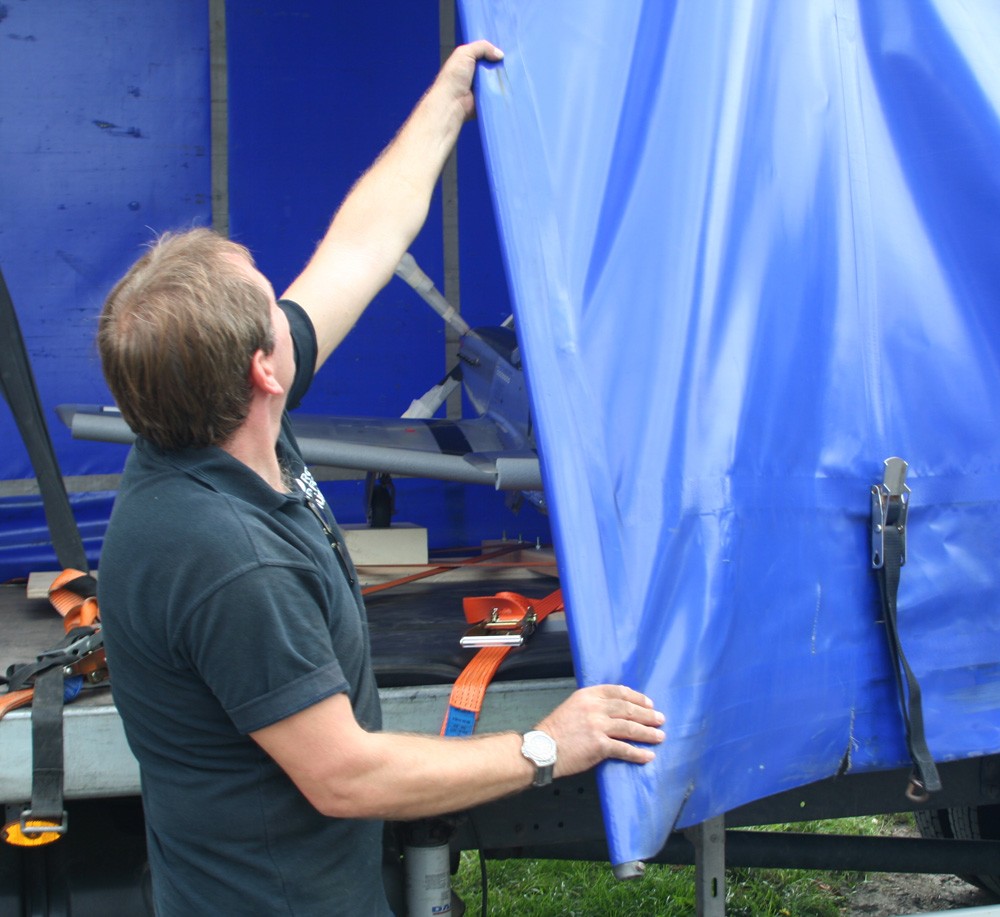 ..bringing the curtain down on a project that spanned eight years. 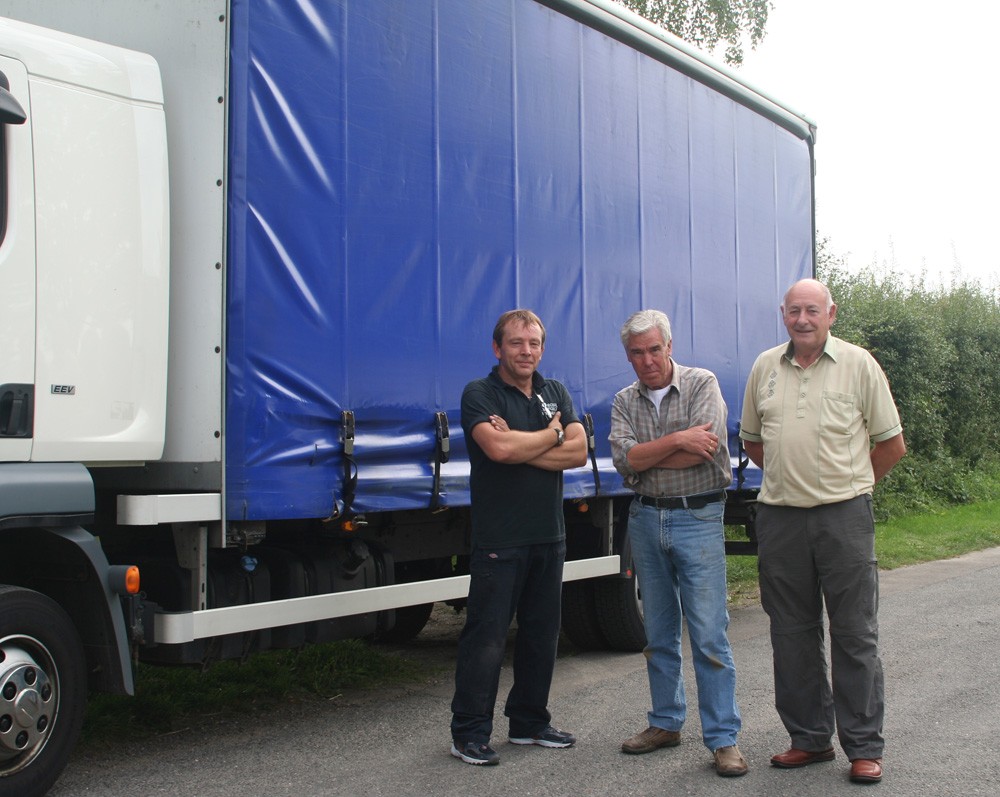 I'm flanked by the RAF Museum's Ian Osbourne and Denis Johnson just prior to their departure.