In my last blog I looked back on the construction and fitting of the engine control quadrant. Also prominent inside the cockpit are what the Parts Manual rather ponderously describes as the ‘cockpit enclosure sliding canopy actuating handle’ and the ‘cockpit enclosure canopy emergency release handle’. Both are bolted via their respective supports directly onto the starboard waist longeron where it extends below the windscreen assembly. I single them out here because they illustrate once again how in model making it can be expedient to utilise very different materials and methods, even when making of one particular component.

The emergency release lever started life as a two-part resin off-cut. Why? It was for no other reason than that the double-cranked shape of the part would need a lot of careful cutting and filing, and resin is very easy to cut and file. The secret is to approach the job logically: First, file or mill the resin blank to a depth equivalent that of the lever at its deepest part; next mark the plan view on the top surface of the resin and cut and file to shape using the vice jaws as an aid to cutting; then mark where material must be cut away in side elevation, and finally cut the two required slots at the pivot end, drill the bolt hole and round off all edges neatly.

The leaver is mounted in a roughly triangular-shaped support assembly. Here the straightforward geometry and the need to retain bare metal, both suggested that I revert to solid aluminium alloy as my material. My small milling machine is an absolute boon when it comes to this type of work and it took me, as I recall, no longer than an hour to make the part. With the addition of a round-headed brass bolt, nut and washer from stock and little hand-made spring the job was done.

The control handle presented more of a challenge, particularly the handle arm, which had to be cut and turned from three separate brass pieces and carefully soft soldered together. The simple triangular shaped bracket assembly that bolts onto the longeron was easily milled, drilled and filed from alloy stock, and the plastic knob is exactly that, a plastic knob turned in the lathe (and, as such, it required no painting). The stop plate engendered some cheating, for the original calls for a sheet alloy pressing involving a turned-over lip around the circumference. I decided this would be impractical given the scale, so I catered for the lip in the thickness of the sheet alloy I cut it from. Fitted in situ, the ploy is well concealed. The six tiny slots, however, could not be so easily ignored and required some very carefully opening out with a needle file.

For some reason I neglected to take pictures of the oxygen diluter demand regulator during its construction, although it is clearly seen on its rectangular mounting bracket in my photographs of the completed cockpit. The cylindrical body of the instrument was turned in brass on my lathe and set aside while I fashioned the triangular rear plate with its three drilled raised lugs from separate pieces of sheet brass. Holes were drilled laterally into the body of the regulator for the input and output feeds, the bodies of which were themselves turned from brass stock, including the 90 degree elbow which is visible painted metalic blue in the photograph disappearing through an aperture in the instrument panel. A butterfly type control knob is attached to the front of the regulator, together with an en-scribed disc to indicate the various control settings. This, of course involved custom rubdowns created in the usual way on my computer. Photographs of the real thing showed a distinct variation in the shades of ‘black’ between this data plate and the regular body, and I was careful to acknowledge this when it came to spray painting, an appropriate illustration of how careful study of pictures pays dividends when it comes to the subtleties of finishing a model.

The observant will note that there is no oxygen hose fitted, an unashamed omission justified on the grounds that it is not unusual to see full size Mustang cockpits similarly bereft, but possibly more to do with my total lack of success when it came to finding anything among my bric-a-brac remotely resembling the real thing. 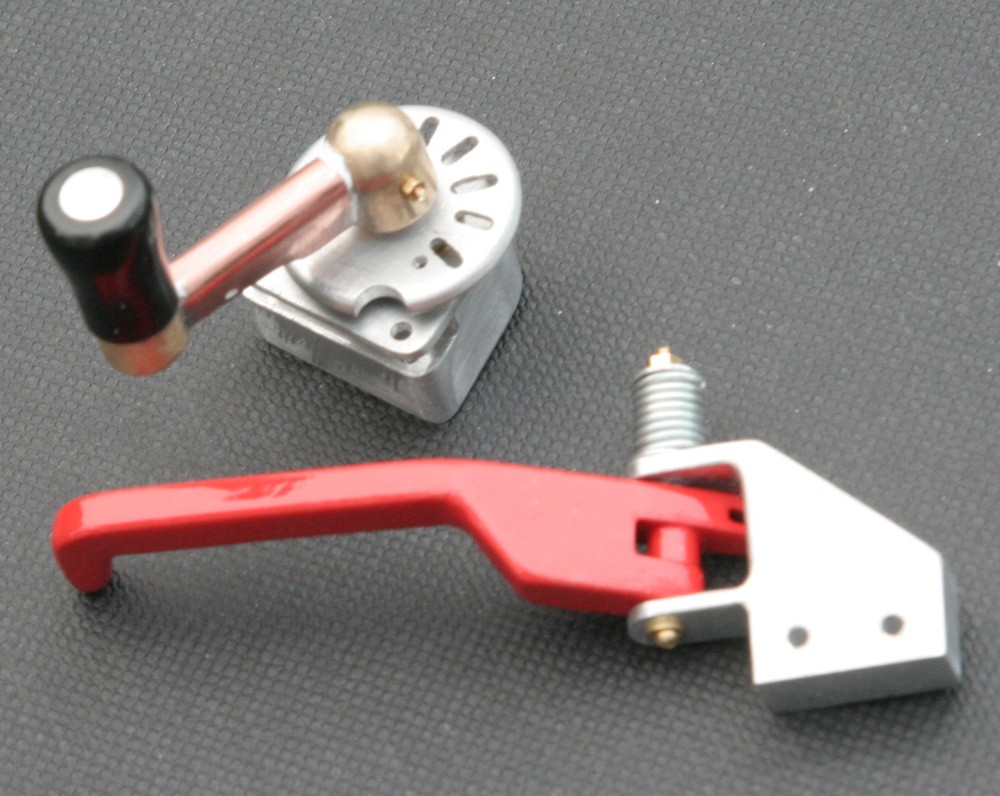 The crank handle which opens the aircraft's sliding hood and the associated emergency canopy release lever. 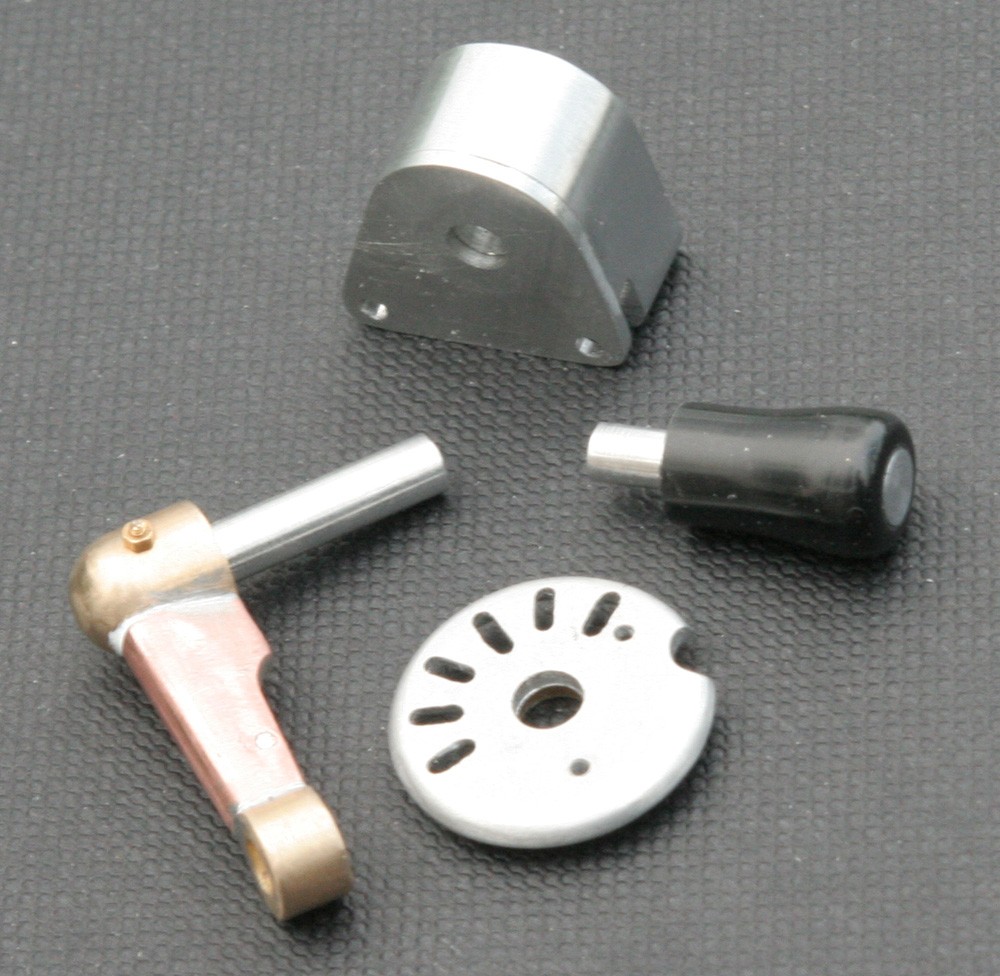 The principal components of the handle and its support sub-assembly. 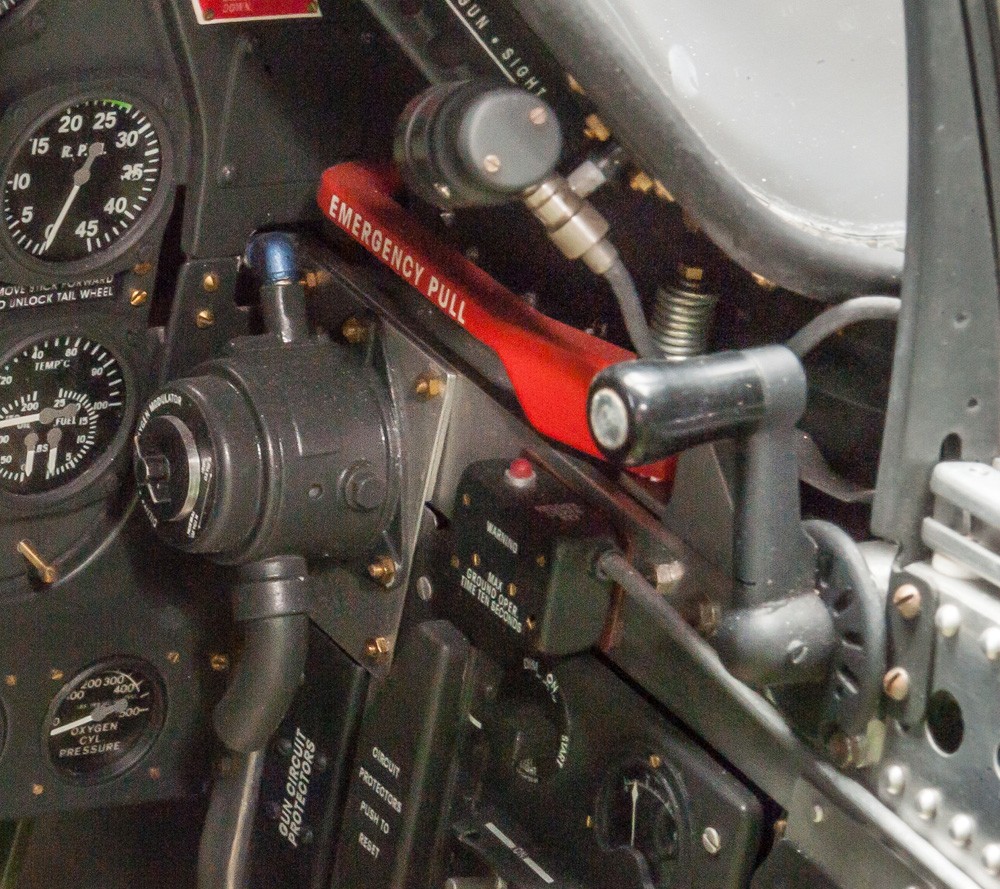 All three assemblies as they appear in the finished model. This image also shows the oxygen regulator, built up as described in the text. Note also the adjustable cockpit panel light mounted on its pivot just above the red-painted emergency release lever.