When I began this ‘diary’ in November 2009, I was well advanced with the model. Indeed, the first entry has a picture of the underside of the wing, including one of the two almost completed wheel bays, a hugely important feature of the model that thus far I have seriously neglected in these notes. So in this and my next two web logs I propose to redress the omission, beginning with a look at the very early stages when the balsa and plywood ‘proto-wing’ first gave way to metal as the process of lining the wheel bays with litho plate got under way.

Unlike the Spitfire, whose wheel ‘wells’ are small, circular and largely unadorned openings in the under-wing – modest affairs by any standard – the Mustang wheel bays, by their very size and extent, pose a significant headache for a model maker, for whom structural strength is as important as fidelity to scale and realism. This significant challenge at an early stage required that I ‘feel my way’, trusting to instinct that my solution would not – quite literally – collapse around me!

Over the greater part of the model’s one-piece wing (and fuselage) the uniform solidity of the balsa and ply substrate guarantees a massively strong and rigid structure. But not so around these cavernous wheel bays, where strength would of necessity have to be transferred locally to a composite laminate made up of litho plate, flimsy balsa sheet and even thinner birch-ply. In the event, this composite proved far from ‘flimsy’; nonetheless, I suspect that it is the litho-plate cladding both the exterior and interior surfaces (an overall metal thickness of no more than 22 thousandths of an inch) that provides most of the strength.

The first stage in building the wheel bays was to cut out apertures corresponding to their plan view in the 1/8-in chord-wise ply sheet over which the wing is built. And by plan view I mean the extent to which the apertures extend within the wing structure, rather than simply the shape of the hole in the under-wing. As each subsequent ply rib-section is added, similar apertures have to be cut in the vertical plane, leaving a flimsy arch of ply of no more than 1/8 in. deep by way of the top skin, thereby keeping any compromise to interior scale to the bare minimum.

Having got this far, and with the bulk of the wing ‘blocked out’ with balsawood to guarantee rigidity, I was ready to start building up the wheel bay sides with thin birch ply. This was simple enough inboard and aft where the massive wing centre-section (Rib 0) and the main spar provide respective solid surfaces, but not so simple forward where the shape is defined by some rather tricky built-up geometry and lightening holes. This is clearly seen in my pictures, and was achieved in a more or less ad hoc way by cutting the ply parts to fit and gluing them into place with the support of numerous hidden scraps of balsa located wherever they seemed most likely to do any good.

So far, so good, however, I still had to install the extended and unsupported part of the wing under-skin to the shape delineated by the fit of the paired wheel bay doors. Again I hope my pictures illustrate the approach used, which involved cutting the aperture outline in the form of strips of hardwood three-ply which, when assembled, provided an accurate framework within which to graft sheet balsa panels. This was a tricky job but once again, when the thin birch ply liners had been glued in and the whole lot beefed up internally with printers’ plate, the outcome was robust, even prior to subsequent structural additions to the interior space.

Finally, the way was open to start adding litho plate over the birch ply, a satisfying and relatively straightforward process, requiring a combination of careful measurement and trail and error to cut each skin plate in turn. I habitually use EvoStik contact adhesive for this sort of work because of the huge strength of the bond. The downside is its unforgiving nature if you happen to miss-position anything. Only with the sidewalls fully metal skinned was it practicable to start on the ‘roof’, firstly by infilling between the ply sections with 1/8-in balsa sheet, then by lining the entire under-surface with 3/32-in. birch ply sheet, not just for strength but also to help even out any slight irregularities prior to addition of the finished metal surface.

By this stage I began to relax, for it was clear that the strength/rigidity problem had been solved, even without installation of interior wing rib sections and numerous stringers that characterise the principal internal structural components of the wing, which is the subject of the next blog. 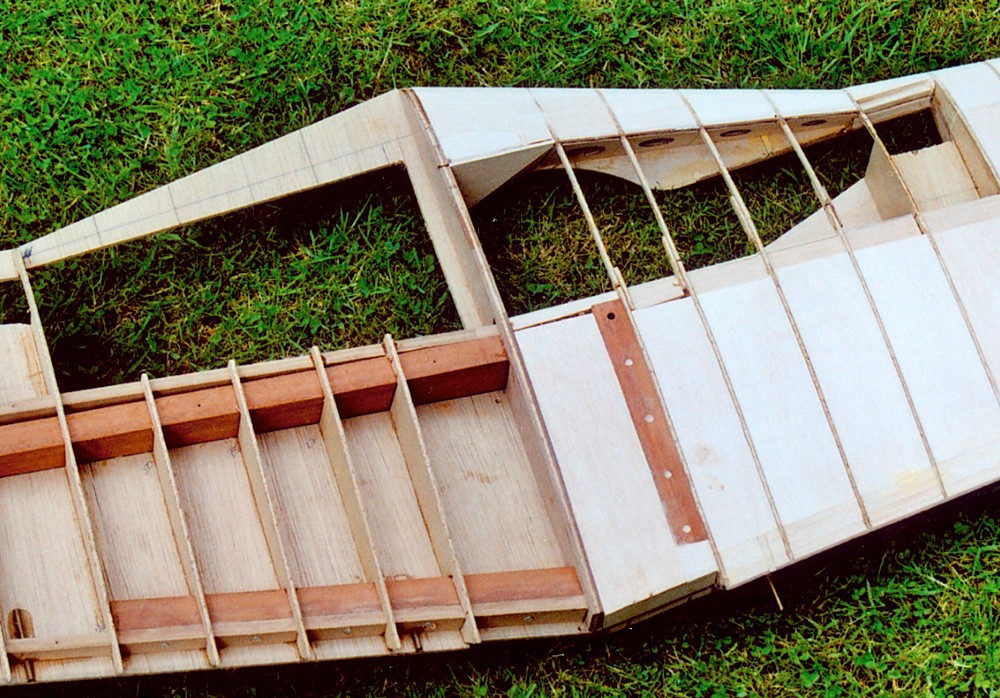 The starboard wheel bay at the stage where metal skinning can begin. Inevitably, the delicate ply supports spanning the roof of the wheel bay received damage during construction. Note how they have been repeatedly braced either side where breakages happened. 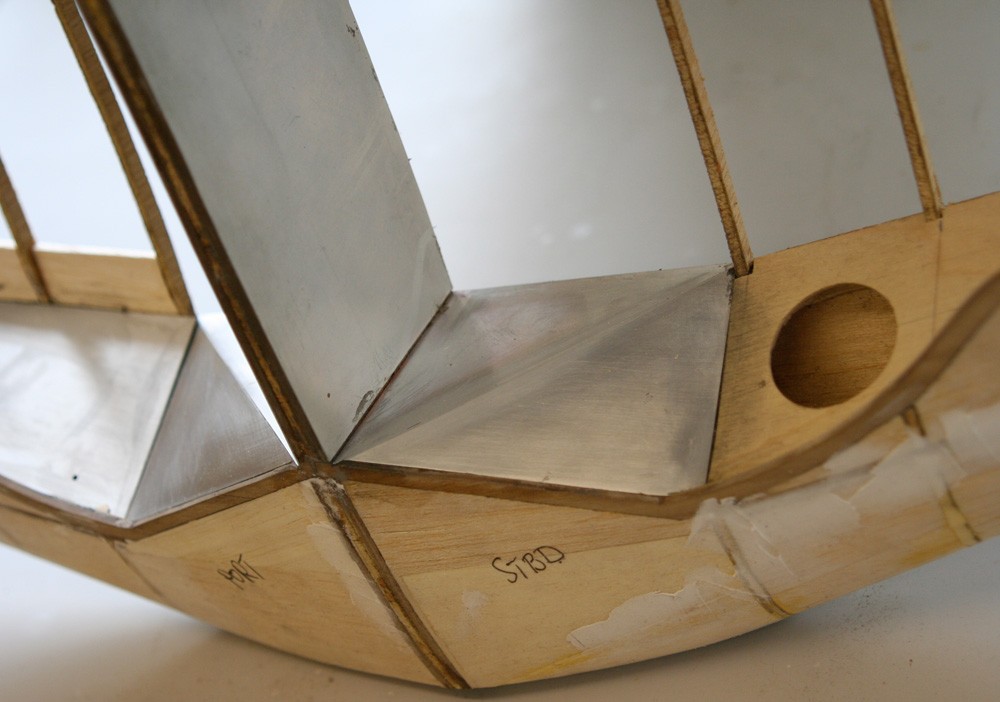 The first stage is to line the walls with birch-ply. A trace of this can be seen on the right of this picture, complete with an aperture cut by way of the access door over the gun camera. Litho plate skinning is well under way. 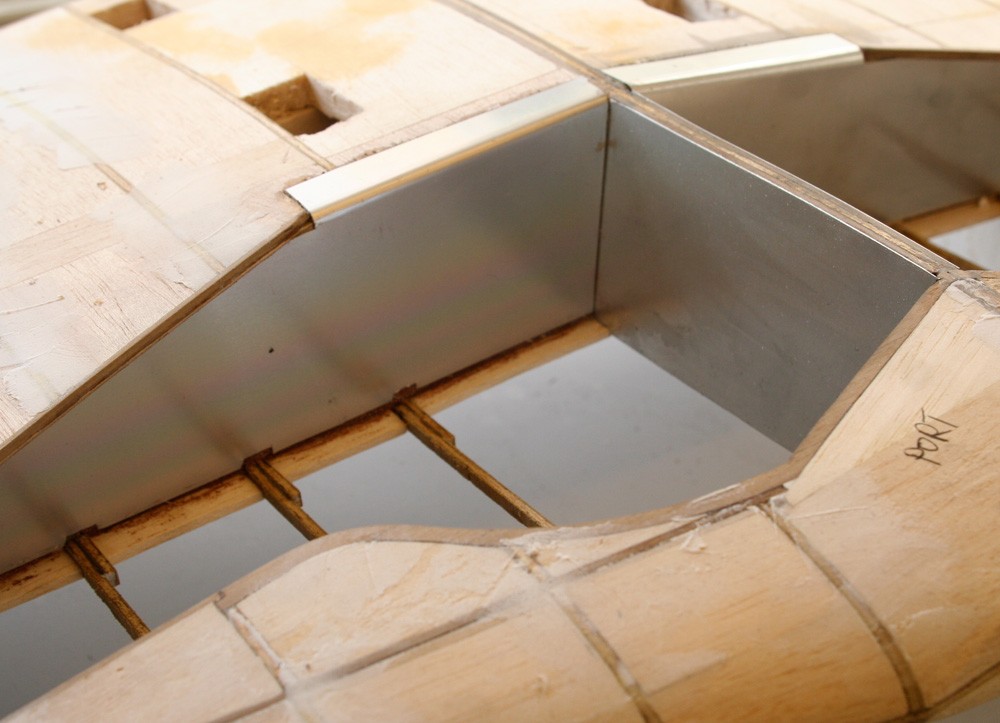 The same space seen from the underside. The prominent holes in the balsa infill are to allow access for the four large bolts that will hold the mainplane to the fuselage. 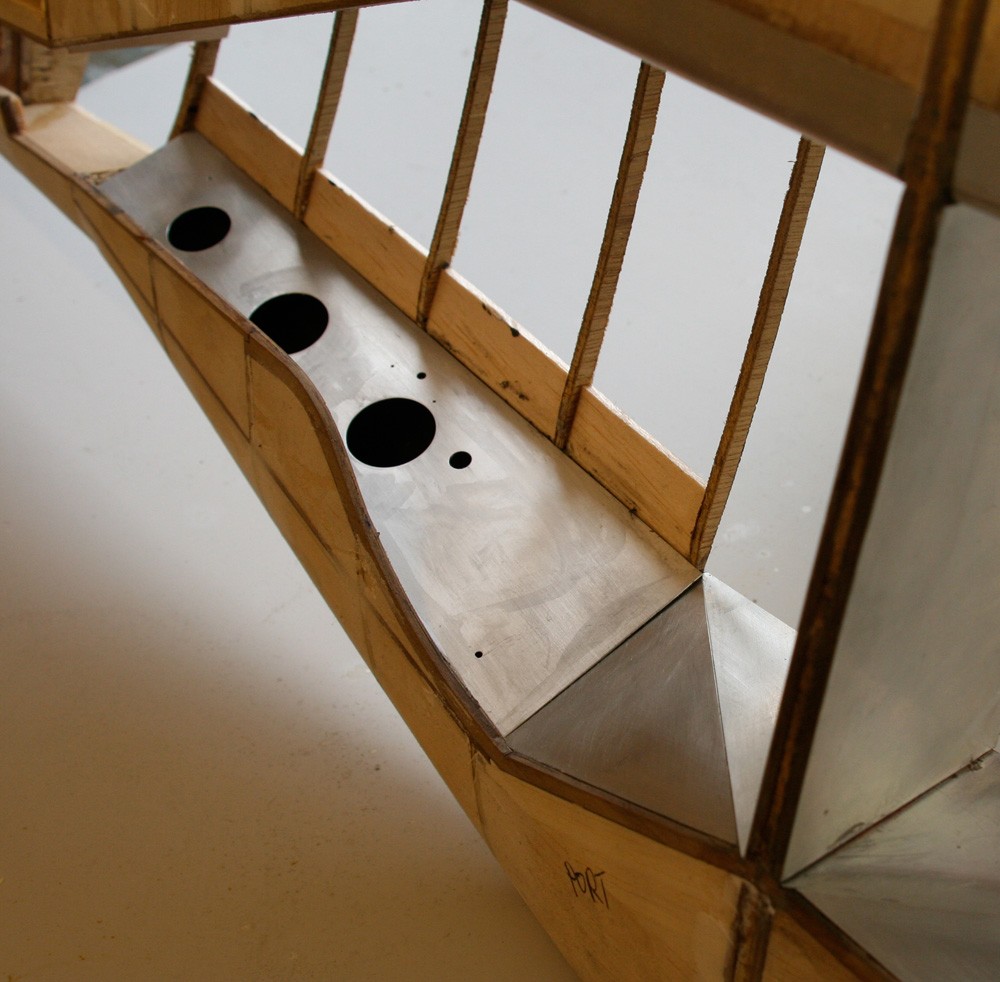 Work at a later stage on the port side wheel bay. Note the three lightening holes and the angular geometry. 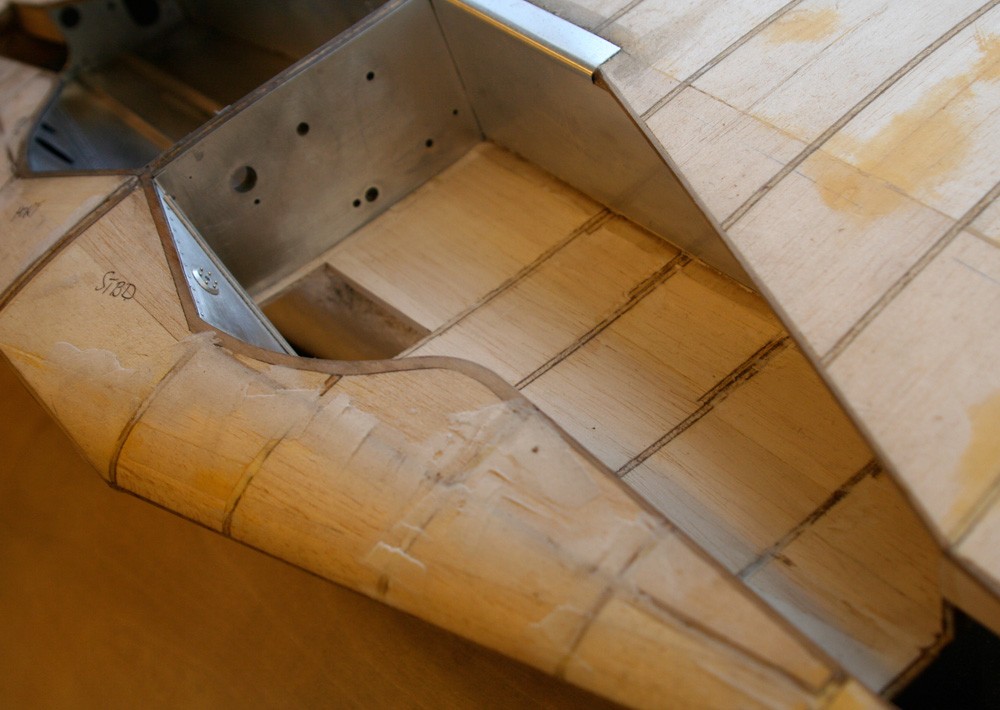 With the sidewalls skinned, work can begin on the 'roof'. The first stage is to glue in the sheet balsa between the overarching supports. 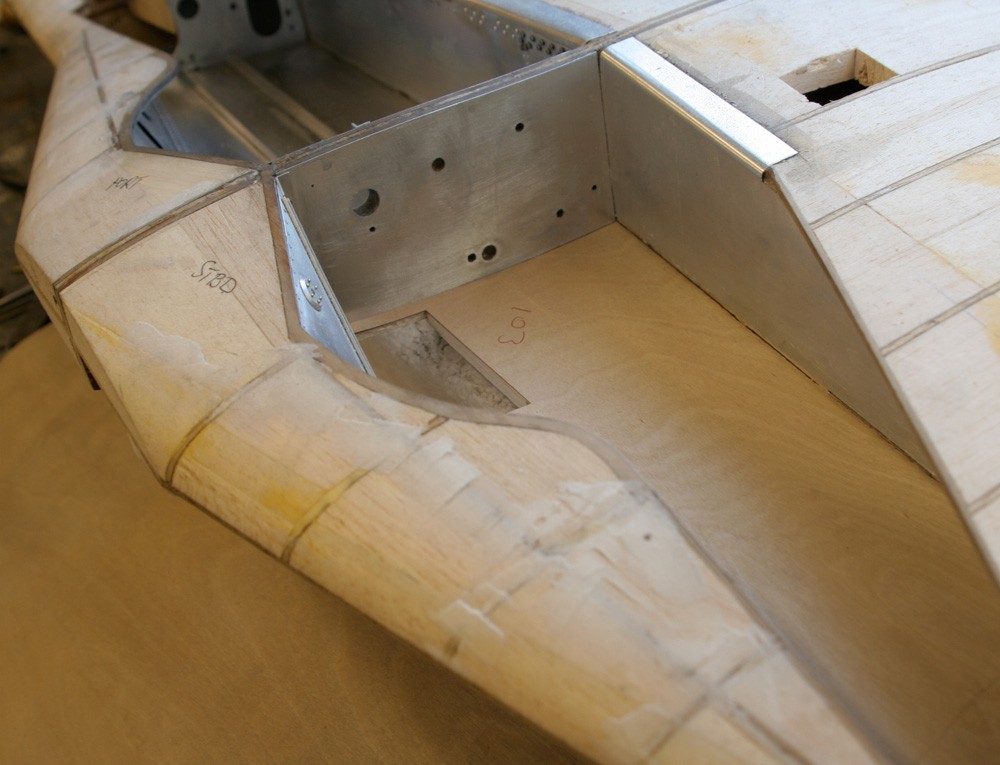 Then the surface can be cleaned up and lined with birch-ply ready for the metal skin. Note the various holes made in Rib 0. These were taken direct from the production drawings.