Viewed wheels-up, nothing could be simpler than a Mustang’s landing gear doors. The challenge comes in the built-up interior structure with its numerous three-dimensional contours and attendant fine detail, notably the latch mechanism. At 1:5-scale this is a job that requires good drawings of component parts as well as a GA.

Like many model-making tasks, when the drawings and photographs are carefully studied and the shapes mentally broken down into their fundamental parts, what at first appears impossible becomes doable. Looked at in this way, the door devolves down to two simple outline shapes cut respectively from basswood and 0.5mm aluminium sheet (photo 1).

The first most obvious feature is the quasi-circular indentation by way of the main wheel and tyre. So this is marked in pencil on the basswood blank, and the shallow dish-like cavity is cut out with a curved chisel and finished with sandpaper - not difficult (photos 2 and 3).

Next the wood surface is marked out for the three tapered flutes, complete with their centre lines (photo 3). The latter are important because they fix the positions of three narrow parallel slots that can straight away be milled or routed out of the wood using an end cutter of appropriate diameter. Now, with their tear-shaped upper edges delineated by the pencil lines and the underside by the newly cut slots, the sloping sides of the flutes can be carved and sanded to shape. The small circular cavity located just behind the door lock is also milled out at this stage.

Finally, after the flat under-surface of the basswood blank is given a slight overall radius with sandpaper and block to conform to the under-wing contours, the wood is glued securely to its aluminium exterior skin panel (photo 4).

Now the fun starts: While the leading edge of the structure is catered for by the smoothly radiused carved wood, the top, bottom and trailing edges are more complex. These have to be built up, either by making a surface rebate in the wood locally so as to let in overhanging strips of 0.5 mm alloy or – in the case of the linear bottom edge – by gluing in a length of milled aluminium channel section. Done carefully and made good with superglue and filler, the tight joint between metal and wood become invisible beneath multiple coats of automotive primer (photo 5).

This completes the structural work; what it left is detail, but there’s a lot of it. Parts such as the hinge blocks, attachment for the extension ram and the latch mechanism were variously cut, milled, filed and drilled from solid aluminium, using the NAA component drawings. I made some simplifications, but by and large these parts are as specified.

The sheet-aluminium cover that protects the locking mechanism warrants some explanation. I cut the projecting shape in solid aluminium and secured it to a flat base with screws, thereby creating a pattern over which to form annealed litho plate into the required tent-like shape complete with large peripheral flange, the latter being trimmed to shape after the piece was removed from the jig (photo 6). By comparison, the D-shaped access panel – also cut from litho plate – was simplicity itself.

Finally, the entire job was re-sprayed with more primer, filling, sanding and generally cleaning up any residual imperfections between coats. Snap head rivet positions were marked and drilled and the rivets emplaced using my usual technique, and with all the fittings permanently assembled the job was treated to several finishing coats of Halfords aluminium spray paint, leaving the exterior facing skin in bare metal.

I have never learned the purpose of the bright metal panel that bisects the interior of the doors, but no-matter. I represented it with polished sheet pewter, the only material I could imagine that would snug down tightly to the contours of the underlying structure, and I think it works pretty well.

Final details applied included the serried brass screws and bolts along the bottom edge of the door, and the composite strip riveted at the trailing edge.

I hope that the foregoing demonstrates how fairly complex three-dimensional structures can be developed from a sequence of relatively simple stages. Yet in this case the end result relies on a fundamental deception, made possible only because the interior surface of the door is painted, as it might well be in the original. I judged at the outset that to form the crisp sculpted interior shape in metal alone, or even wood clad in metal, as is the norm for the rest of the model, would have been beyond my abilities, so I took a compromise route. Sleight of hand, maybe, but thanks to the sealant and filling quality of modern primers and spray paints, I like to think I’ve got away with it. 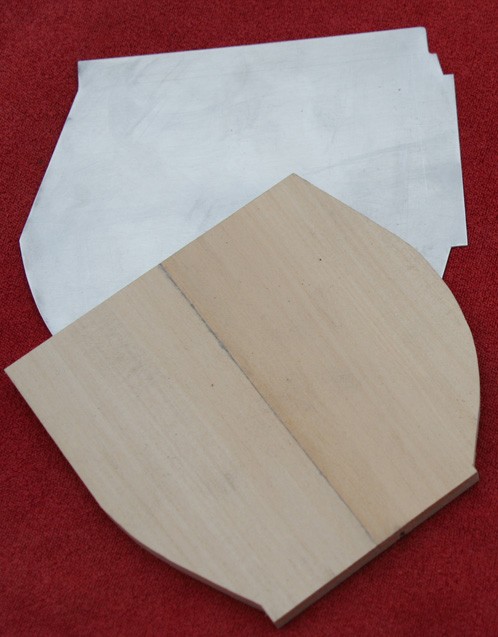 Photo 1: The shape of the outer skin panel and the interior built-up section of the door are cut from sheet alloy and basswood respectively. Note the butt joint in the wood made in order to create a plank of sufficient width. 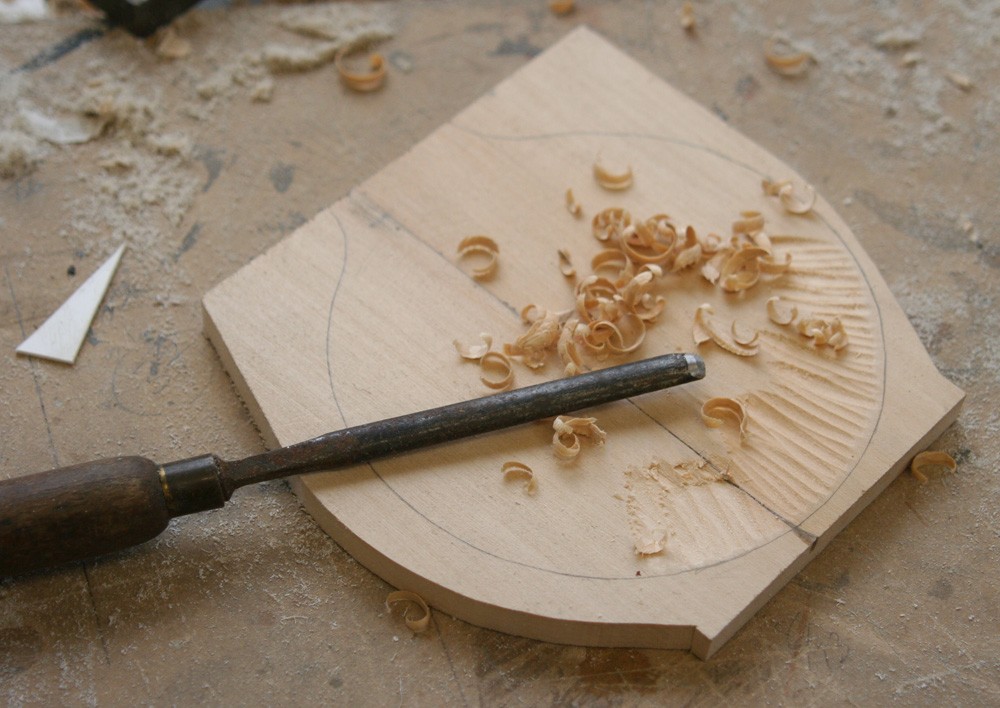 Photo 2: The outline of the dish-like cavity has been transferred from the drawing to the workpiece and the carving process begins. 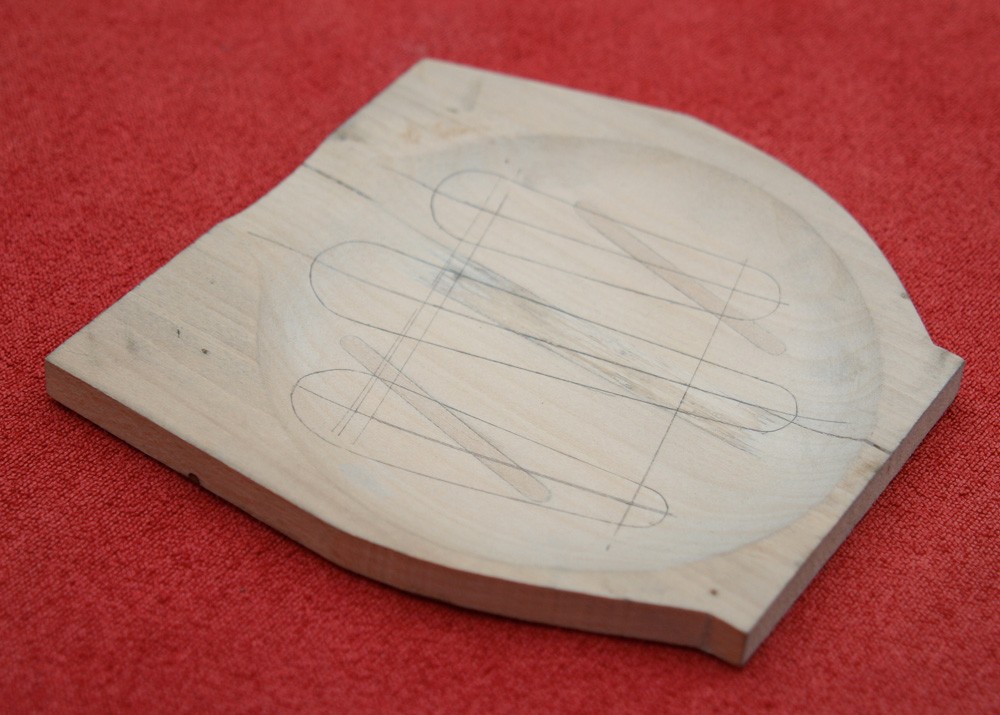 Photo 3: Now the surface position of the three deeper flutes are marked out. 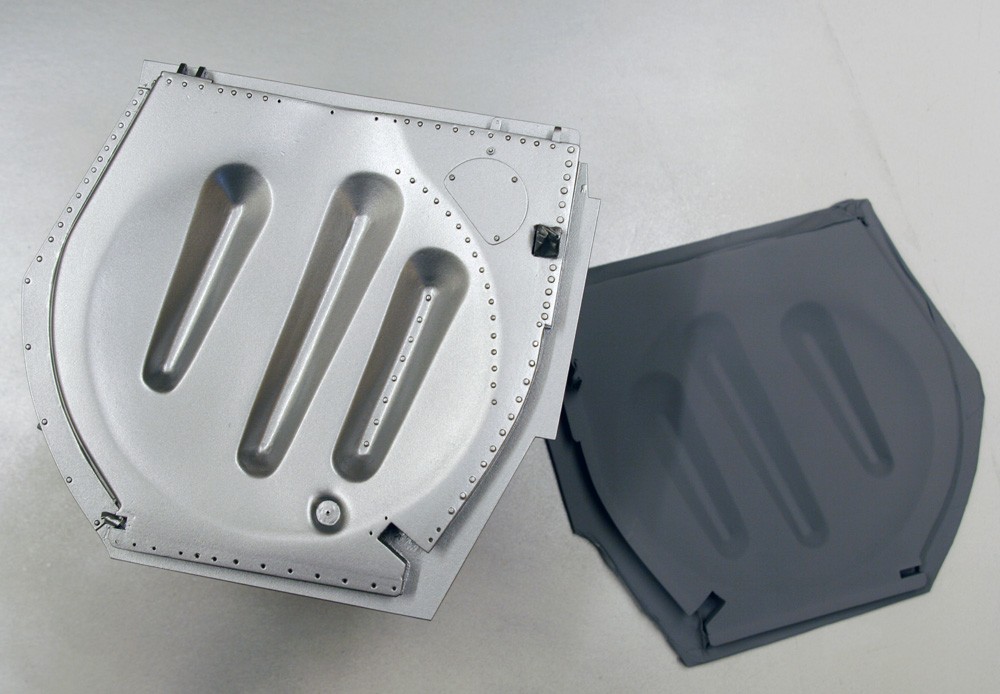 Photo 5: A lot of detail has now been added, most notably the aluminium channel-section extensions to the lower and trailing edges of the door. Since the seam is invisible, they give the illusion of additional width and depth to the top skin and the sandwich-like design of the original. Note the second door is at an earlier stage and still in grey primer. Note the machined hinge blocks just visible at the top of the picture. 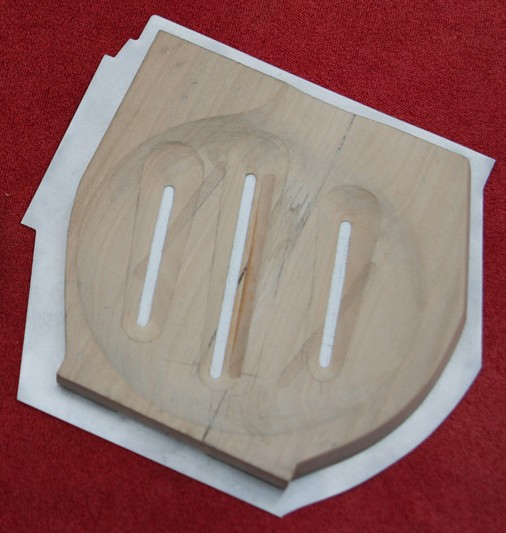 Photo 4: The wood carving stage is complete. Only the deep slot to house the locking mechanism remains to be cut away, and then the wood can be glued to the aluminium outer skin. 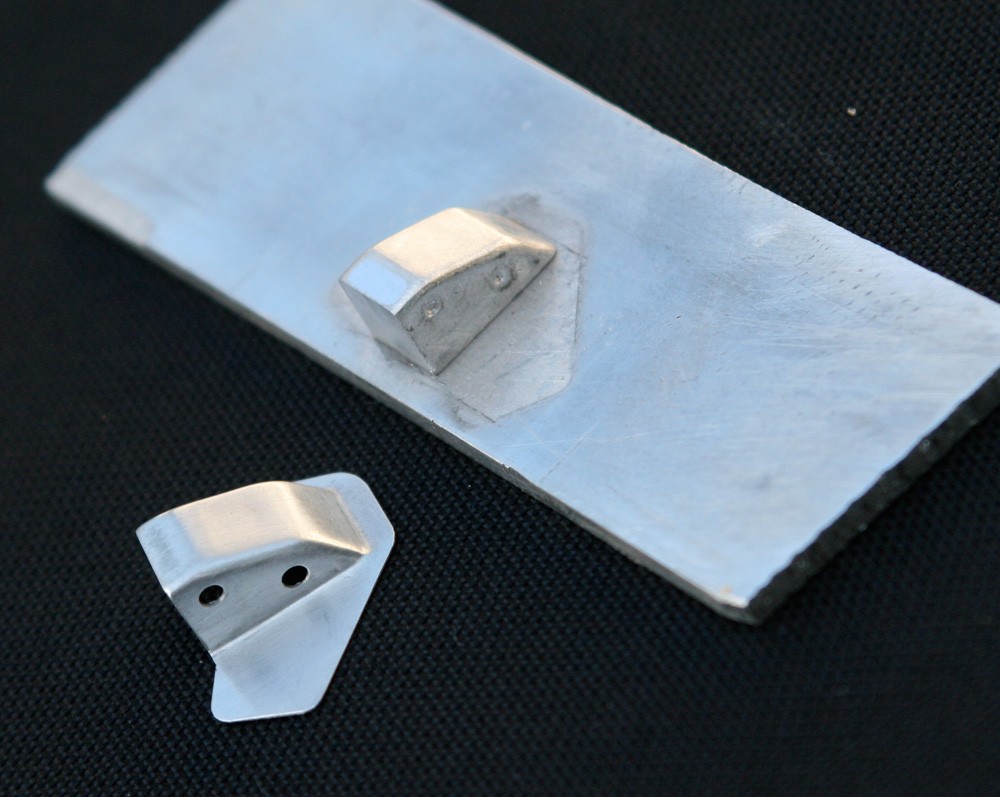 Photo 6: The simple former over which I made the locking mechanism covers, and one of the two finished parts. The two holes were drilled while the workpiece was still seated on the former. 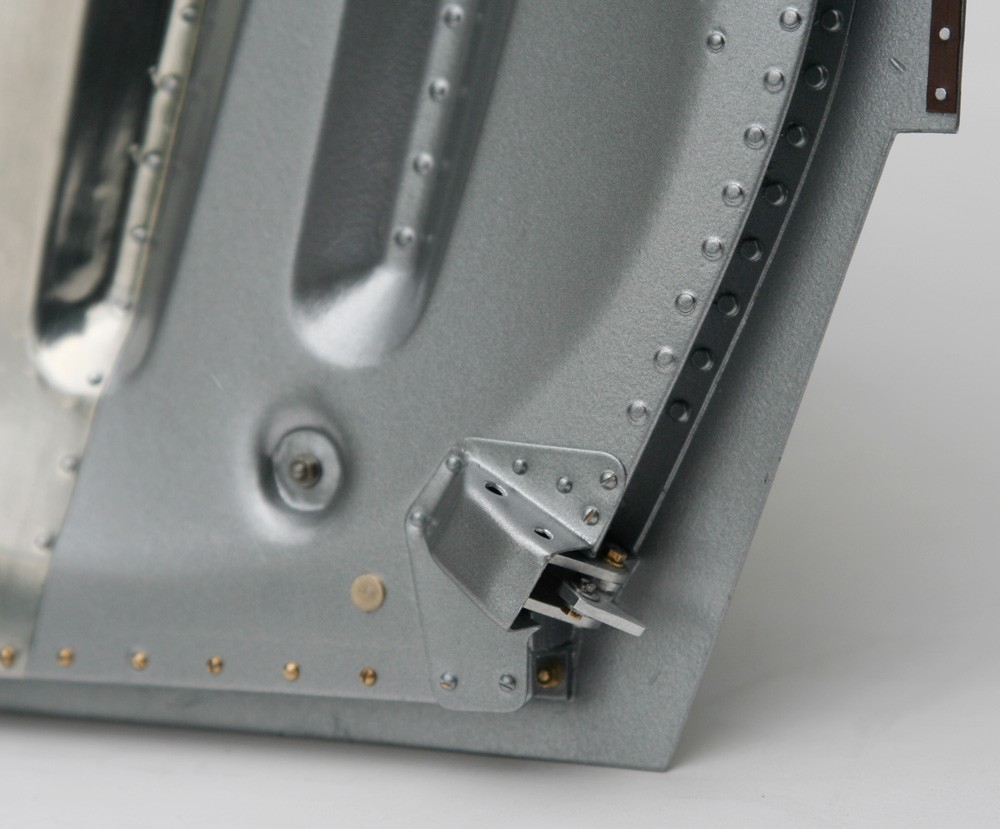 Photo 7: Detail of the cover in position and the visible parts of the locking mechanism nestled inside it. 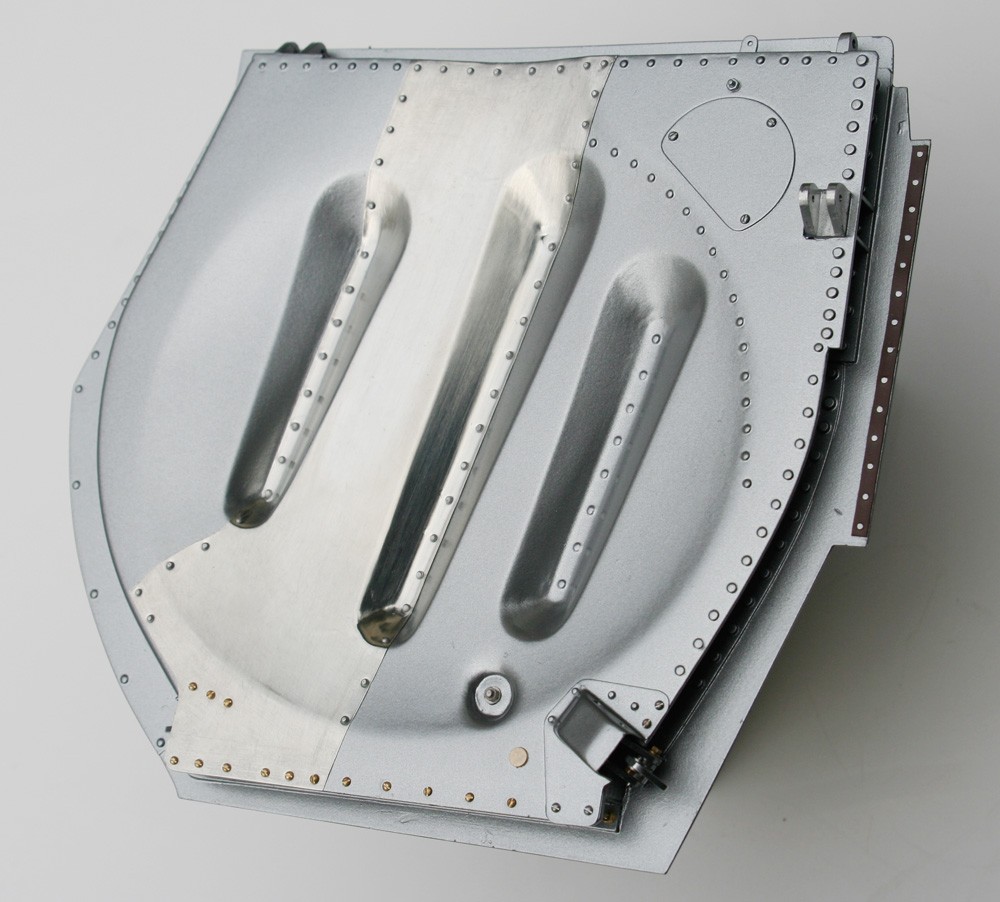 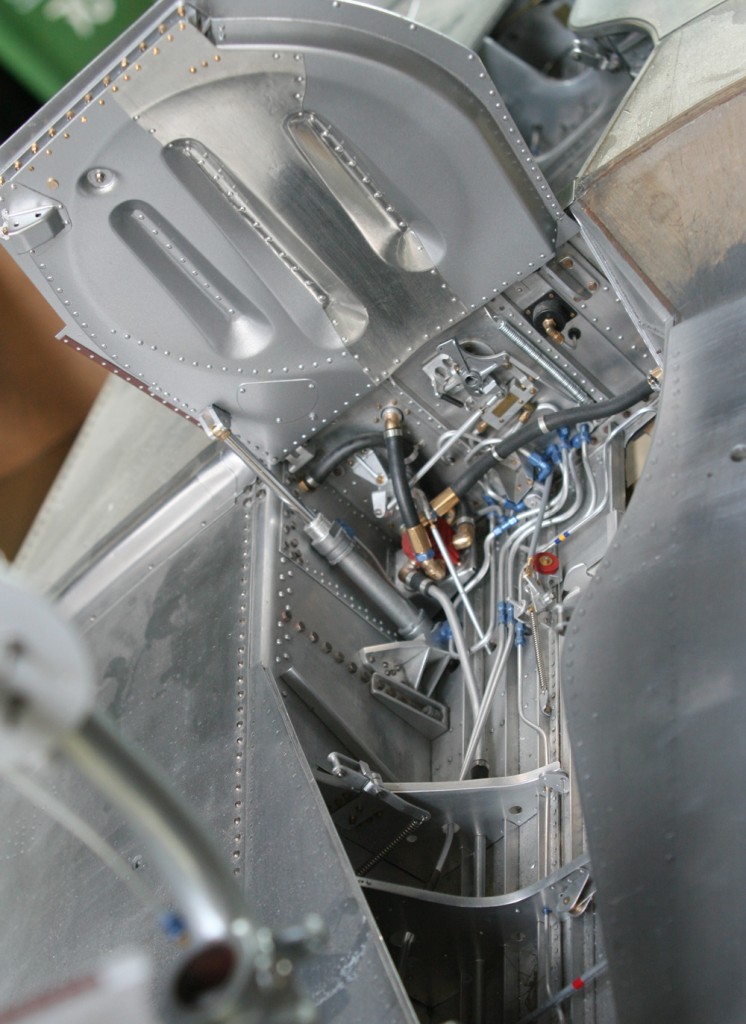 Photo 9: The door mounted on its hinge blocks, with the actuating ram connected up.